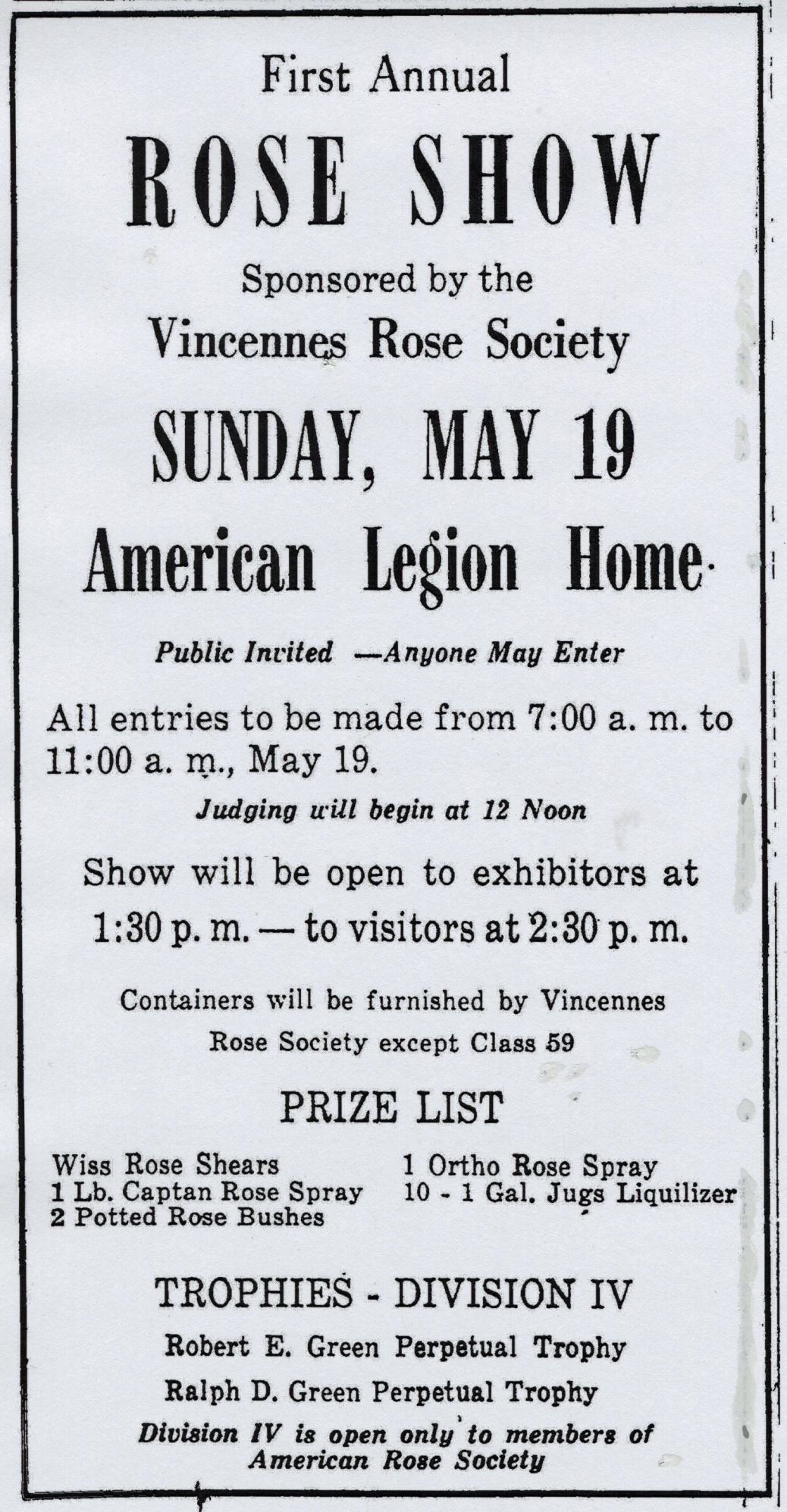 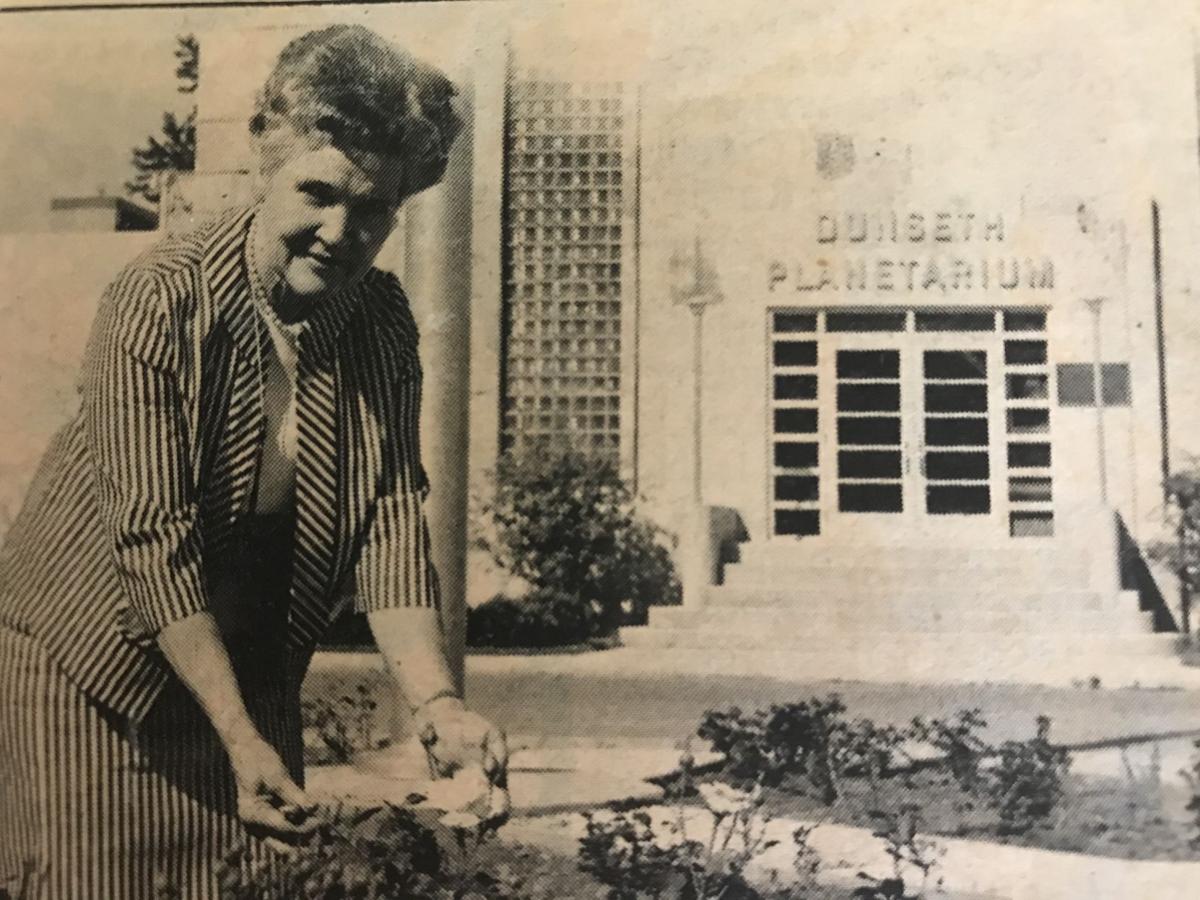 It was May 19, 1957, a rainy Sunday, and the auditorium of the American Legion Home on North Fourth Street was filled with colorful, fragrant roses. Despite the inclement weather, hundreds of people filed through to enjoy the beautiful flowers. It was on that day that members of the Vincennes Rose Society held their first rose show, what would become a highly anticipated annual event for the next several decades. The Vincennes Rose Society, made up of amateur rose enthusiasts, was organized in 1956. The organization’s work inspired many in the city to plant their own roses.

The competition was for amateur rose growers. Some divisions were open to anyone, not just members of the society. Entrants didn’t even have to live in Knox County. Categories included hybrid tea, floribunda, grandiflora, hybrid perpetual, miniature, climbers, and old-fashioned. There were 530 entries that first year, a testament to the enormous popularity among the public of cultivating roses.

Entries in four divisions were taken in the morning and judging began at noon. Judges that first year were David Golden, of Elmhurst, Illinois and Dr. and Mrs. William Ayres. Golden was District Director of the American Rose Society for the Indiana-Illinois District. He was an amateur rose grower and had 300 rose bushes planted at his home. Dr. Ayers was Dean of the School of Science, Education and Humanities at Purdue University. Judging was based on the rules of the American Rose Society.

Mr. and Mrs. L. Edward Allard, of Sikeston, Missouri, won the Queen of Show award, and local participant Victor Langford took both Princess of Show and Duchess of Show.

Some of the prizes given were rose shears, rose spray and potted rose bushes.

A rose show was held in Vincennes for many more years. After that first year, the show took place at Green Auditorium (now Robert E. Green Activities Center), then at V.U.’s Morris Hall, and later at the Fortnightly Clubhouse.

Beginning in 1960, the Vincennes Rose Society initiated another big project, when they began planting rose bushes on the Vincennes University campus. The campus had moved from its downtown location to Harrison Park in 1953 and the grounds were still in need of some beautification. V.U. President Dr. Isaac Beckes cultivated his own roses, so, for him, the plants were a welcome addition to campus.

The first two years, rose bushes were planted at the corner of First Street and College Avenue and alongside what was then the Student Union building. Additional plantings took place in subsequent years. Some beds were laid out near the planetarium and others on the water tower fence. By the summer of 1963, some 320 rose bushes had been planted, leading the Sun-Commercial to comment: “The gardens have become one of the leading attractions on campus, rivaling the nearby historical site as a tourist attraction.”

One of the unique aspects of the society’s work was that the majority of the roses planted at V.U. were donated by large garden companies, such as Jackson & Perkins. In fact, many of the roses were experimental and didn’t even have names. They were not yet on the market, but were sent to Vincennes to be tested. Members of the Vincennes Rose Society planted and monitored the roses, making reports to the companies.

Of course, anyone who has grown roses, knows that the plants need much care and maintenance. Rose Society members did most of that work, chief among them being Mrs. Ruth Carter, also a V.U. staff member. Mrs. Carter could often be seen on campus weeding and pruning roses.

By 1965, approximately 600 rose bushes graced the campus where they remained for many years, all thanks to the Vincennes Rose Society.

Brian Spangle can be reached at brianrspangle60@outlook.com. His latest book, “Hidden History of Vincennes & Knox County,” published last year by The History Press, is available for purchase at the Knox County Public Library and on Amazon.