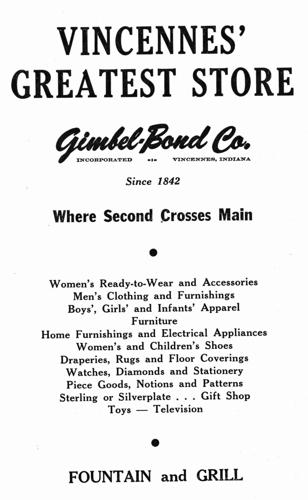 Left: The Gimbel-Bond Store is shown in 1956. Right: A Gimbel-Bond ad from the 1954 Vincennes City Directory is shown. 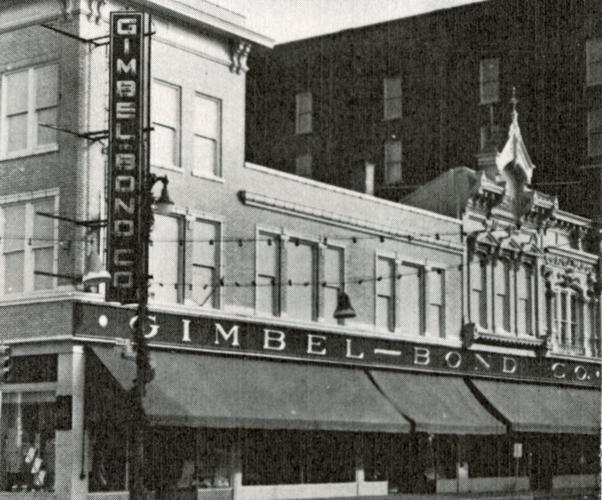 Left: The Gimbel-Bond Store is shown in 1956. Right: A Gimbel-Bond ad from the 1954 Vincennes City Directory is shown.

In 1842, Bavarian Jew Adam Gimbel came to Vincennes and began peddling goods on the street. In the coming years, Gimbel established a big retail presence in the city, building a three-story dry goods and clothing store on the northeast corner of Second and Main streets, where his seven sons were employed. The store was the start of a national retail empire.

The business passed out of the direct hands of the Gimbel family in 1891, when it was sold to local retailer I. Joseph & Sons. Isaac Joseph was Adam Gimbel’s brother-in-law.

A second change in ownership occurred in the final days of 1899, when the former Vincennes Gimbel store was acquired by Gimbel, Haughton & Bond. This new firm was comprised of Jacob Gimbel (Adam’s nephew, the son of his brother Seleman), Charles Haughton, an Oaktown merchant, and Frank Bond, who had once been a clerk in Haughton’s Oaktown dry goods store and was later employed at the First National Bank in Vincennes. The store opened under the new partnership in early 1900. They bought the building outright in 1902, paying $15,000 for the valuable property.

In early 1915, Frank Bond bought out his two partners, retaining the name Gimbel, Haughton & Bond. Haughton stayed on as a department manager. The property then cost Bond $16,500.

A dozen years later, yet a new owner arrived on the scene. In 1927, Max Strashun, who came from Indianapolis where he was employed at a department store, took over operation of the store, did a big remodel, and changed the name to Gimbel-Bond Co. At that time, the store had 62 employees.

Strashun operated the Gimbel store for the next 23 years. In 1950, it was acquired by an out-of-town corporation, which kept the name Gimbel-Bond. Strashun, who maintained ownership of the building, temporarily retired, before partnering with Jack Hasty, Sr, in the department store Strashun-Hasty in the former H. Brokhage & Sons building at 317-319 Main St.

Strashun-Hasty had its grand opening in 1952. The same year that Gimbel-Bond was sold, Ellis Gimbel, the last of the seven Gimbel sons, died in Philadelphia at the age of 84.

William B. Jones was the first of many different general managers over the coming years as Gimbel-Bond remained under corporate ownership. Among the other managers were Rollis D. Smith, Bernard D. Lane, and Robert Thacker.

Gimbel-Bond remained one of the largest, most successful retail stores in downtown Vincennes, eventually encompassing the buildings from 202-212 Main St. In fact, it was advertised as “Vincennes’ Greatest Store.”

They sold all kinds of men’s women’s, and children’s clothing, along with furniture, electrical appliances, draperies, rugs, and floor coverings, jewelry, stationery, toys, and much more. The fountain and grill became a popular downtown spot for lunch.

enBy the 1980s, the day of the big downtown department store was coming to an end. Gimbel-Bond sales were down, and the store closed in the fall of 1982, with 25 employees losing their jobs. Max Strashun died in 1963 and nearly two decades later, on Dec. 31, 1982, the Vincennes University Foundation announced that his heirs had donated the Gimbel building to the foundation. The appraised value of the property was approximately $120,000.

The V. U. Foundation sold the building to longtime Gimbel-Bond manager (the store’s final manager) Robert Thacker and other local investors, who reopened the store in 1983, under the name Old Gimbel Corner at 200 Main St. That business closed a few years later, and the building stood vacant for a time. Later in the 1990s, it housed an antique shop.

The last tangible trace of what was originally Adam Gimbel’s store in Vincennes was erased in December 2011, when the building burned in a disastrous fire. The site of the former store is now green space.

Brian Spangle can be reached at brianrspangle60@outlook.com. His latest book, “Hidden History of Vincennes & Knox County,” published in 2020 by The History Press, is available for purchase at the Knox County Public Library and on Amazon.

Add an entry as anonymous