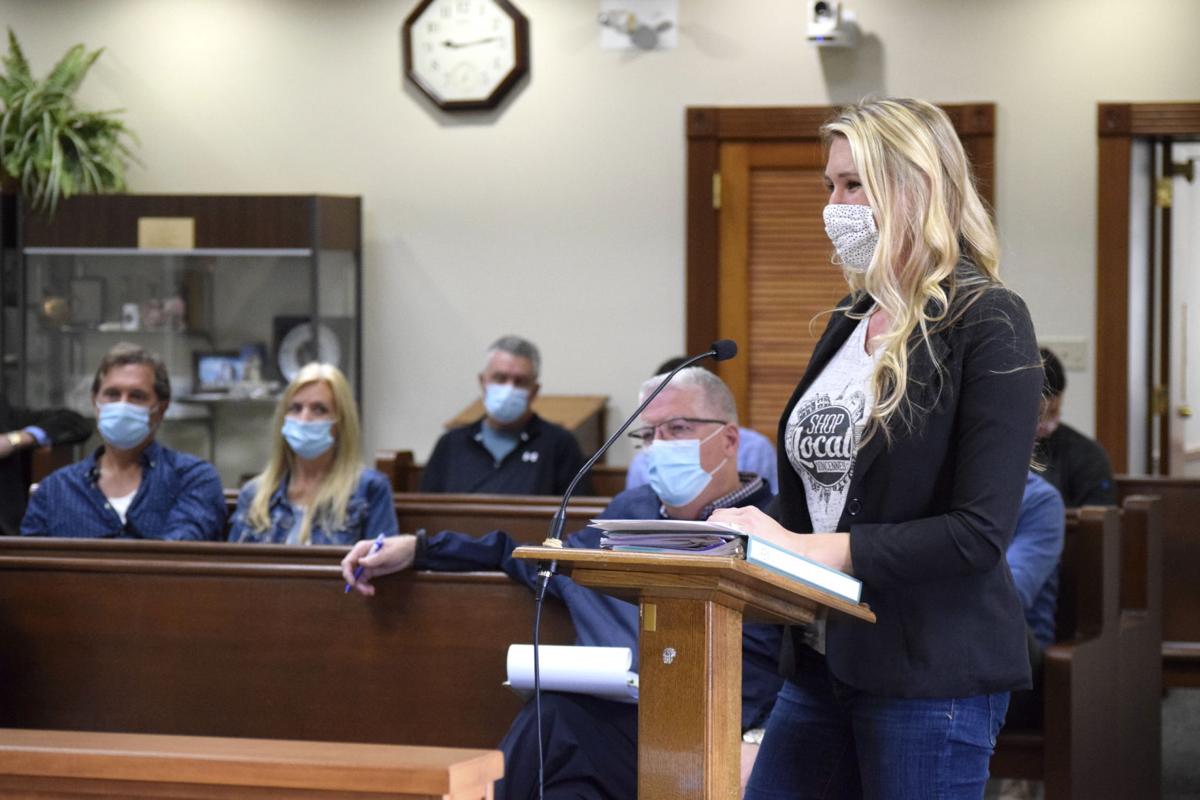 Leah Richter, a downtown developer and business owner, speaks to members of the Vincennes Redevelopment Commission on Thursday morning at City Hall, 201 Vigo St., on behalf of REM Development Group, a trio of local families looking to redevelop both the Oliphant building and the Gimbel Corner. 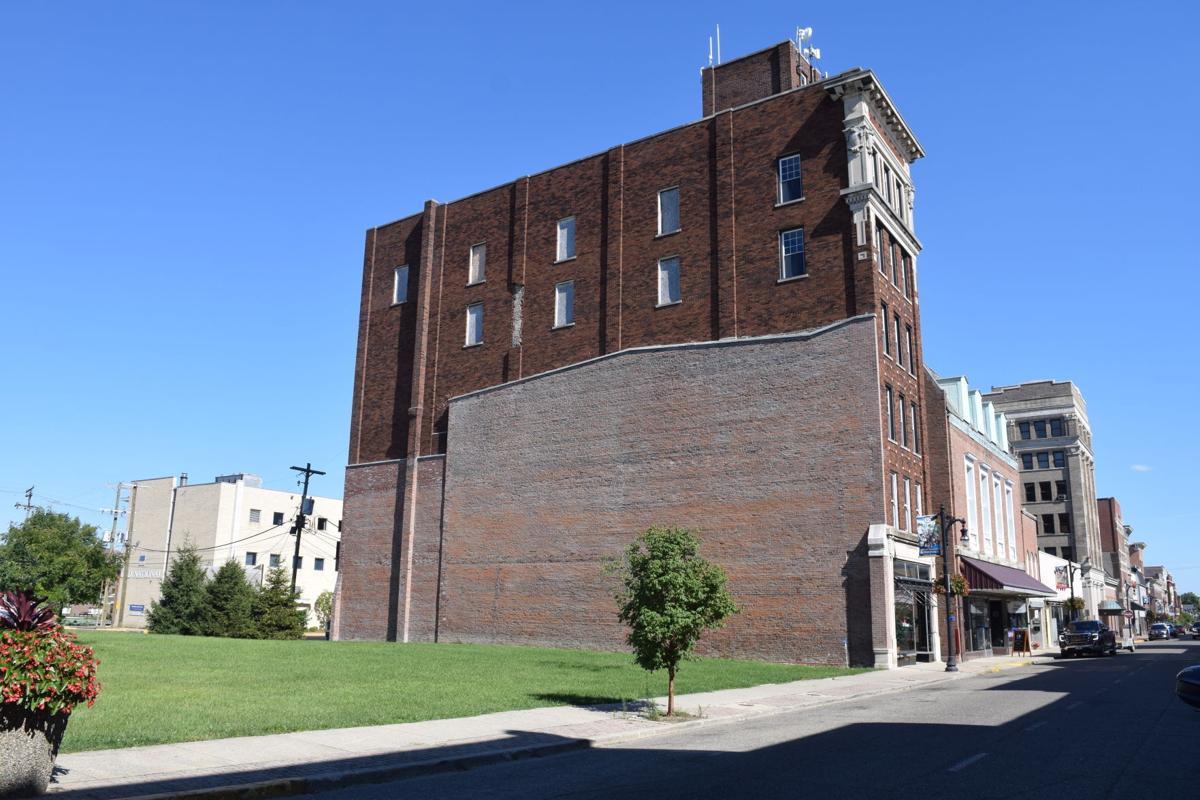 The Gimbel Corner and the Oliphant building at the corner of Second and Main streets is the target for a redevelopment project taken on by the name REM Development Group. 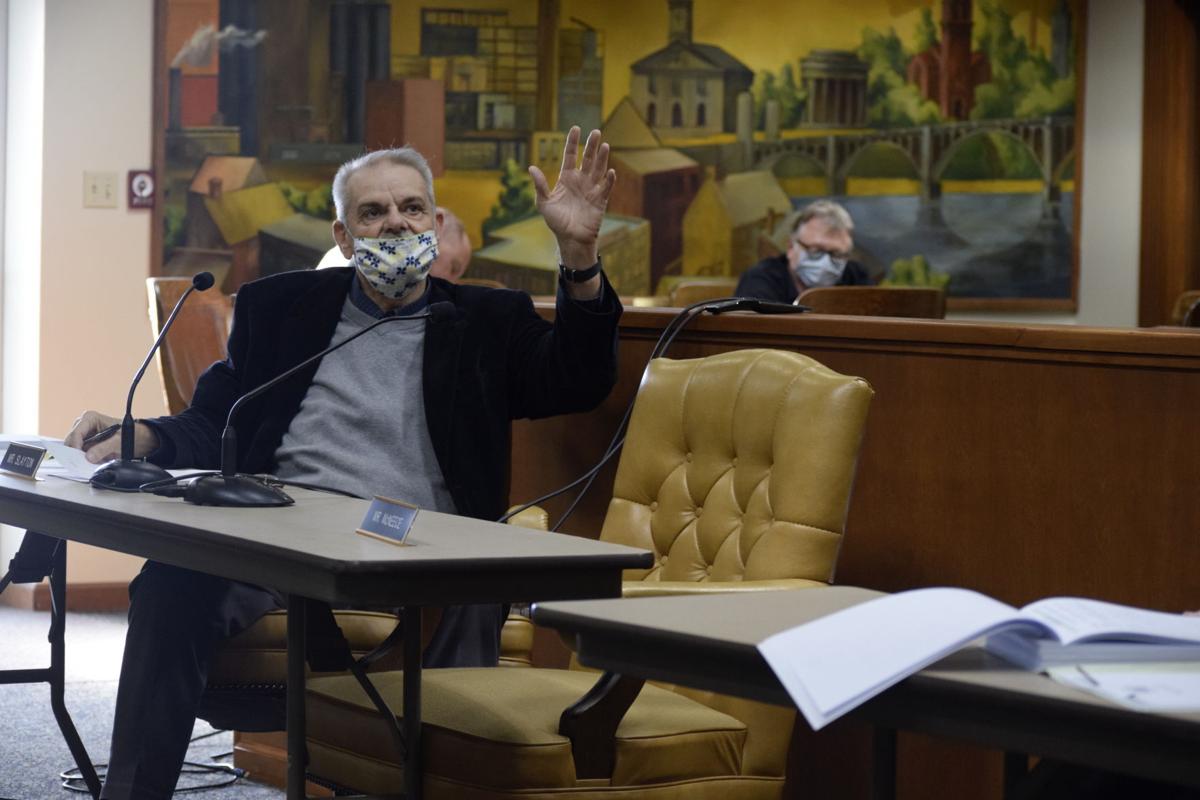 Leah Richter, a downtown developer and business owner, speaks to members of the Vincennes Redevelopment Commission on Thursday morning at City Hall, 201 Vigo St., on behalf of REM Development Group, a trio of local families looking to redevelop both the Oliphant building and the Gimbel Corner.

The Gimbel Corner and the Oliphant building at the corner of Second and Main streets is the target for a redevelopment project taken on by the name REM Development Group.

A trio of families looking to redevelop the Gimbel Corner went before members of the Redevelopment Commission on Thursday with a now expanded project.

Business owner and downtown developer Leah Richter — along with her parents, Kevin and Nancy Emmons, and melon farmers Dennis and Cathy Mouzin and their sons, Brady and Blake — went before members of the RDC in August telling of their plans to purchase the 6-story Oliphant building at 214 Main St. and renovate it into condominiums.

They also had plans for the adjacent Gimbel Corner, a green space the RDC owns but said it would transfer to the families, who are operating as REM Development Group.

Richter told the RDC Thursday morning that response has been so overwhelmingly positive to their plans that they’ve decided to make better, more efficient use of the Gimbel Corner space itself.

The bottom floor of the Oliphant building would remain a commercial space, but each floor above would be its own unit, she said.

Their initial plan was to use the Gimbel Corner to construct five garage spaces fronting Main Street; each structure would be two stories with the front side built to resemble individualized store fronts and above them, rooftop terraces for residents.

Now, Richter said the broadened plan includes taking the development around the corner and onto Second Street, including a commercial space on the corner and more garage and loft spaces to the north.

In total, Richter said she expects there to be 8-10 new residential spaces, some rentable lofts and others condominiums to be sold.

“We’ve received so much interest from the public,” Richter told the RDC. “And Main Street is so limited.

“That’s a nice big lot, so we figured, let’s use it to its fullest.”

Richter said REM Group, too, collectively has been impressed with all the improvements done in recent years along Second Street; businesses have located there and expanded, other spaces have been renovated and the street itself was given a facelift a few years back.

Richter, who has bought and renovated several downtown buildings alongside her husband, Clint Richter, including the Great Bankquet Hall at 302 Main St., said as she’s studied Main Streets across the state, the “most successful ones are the ones that keep people moving.”

Their project will take an empty space on Main Street and add both residential and commercial space.

“We want to keep people moving, shopping, being entertained,” she said.

And while the now expanded project will take away the Gimbel Corner as a green space downtown, she said the occupants themselves will have green space above their garages in the form of rooftop gardens.

“And I think that will be a really neat feature,” she said.

But they need more money to do it.

Initially, the REM Group asked the RDC for little over $130,000 to help with infrastructure costs.

But with the additional development, the overall project cost has gone up to more than $2.5 million; infrastructure costs will be closer to $600,000.

Richter, however, said she is hopeful the project will come in under budget. Not knowing entirely what’s underneath the Gimbel Corner — the historic Gimble Bond department store there burned in late 2011 and the remains were largely buried — she asked contractors giving her estimates to assume the “worst case scenario.”

“And we’re not looking to make a profit on this,” she told the RDC. “We’re just hoping to break even.

“This is something we all just want to do for our town.”

And while RDC members are all for it — they had already committed both the Gimbel Corner itself and $130,000 to go with it — they wanted to first consult with their financial advisors, ones with Reedy Financial Group in Seymour, on whether or not it will be feasible given other financial commitments.

Helping their case, however, is that REM Group’s timeline is 2-3 years before completion.

“I think everybody wants to continue to look at this project,” said RDC president Tim Smith. “And while my first thought was that three years is just too long, it would help with our budget and cashflow.”

Stanley Tucci's negroni with a twist

RDC member Greg Parsley, also superintendent of the Vincennes Community School Corp., agreed that he was in support of REM’s project.

“My only concern,” he said, “is from a financial standpoint. I don’t want to overstretch ourselves knowing other projects are on the horizon.”

“But it’s a phenomenal project,” he said.

Two of those “projects on the horizon” include Phase II and Phase III of a multi-year effort to improve Main Street from 22nd Street out to Richard Bauer Drive.

Phase I was only recently completed, and the RDC is deep into planning for Phase II, which includes a realignment of the intersection of Felt King Road, Main Street and Ramsey Road.

The city got a state grant to pay 80% of the estimated $4 million for Phase II, but Phase III, which is likely to be done at the same time, is set to be fully funded by the RDC.

The group hasn’t yet discussed how much Phase III could cost, at least not publicly.

RDC member Bob Slayton said, in looking at REM’s plans for the Gimbel Corner, he was “really excited.” He called it the potential “capstone” project of a now thriving downtown area.

Yet he agreed the RDC has several large commitments coming up, and he wondered if their priorities shouldn’t be shifted.

“Do we have enough latitude in our budget to be able to support something like this?” he asked, holding up REM’s proposal. “And are we absolutely committed to Main Street Phase III? I know the first part out to Kimmell Pointe had to be done; that was a high priority. So was straightening out Felt King Road.

“But do we need to go all the way out to the high school?” he asked. “In economics you’re taught you have to choose between guns, butter and silver spoons. You never have enough to do all you want to do. So should there be consideration given to not completing every aspect of Phase III so we can allocate more money for things like this, for housing?”

Other RDC members, however, weren’t quick to jump on board with his idea.

The Main Street projects, Smith pointed out, have been on the RDC’s wish list for years; it pre-dates many of the current commissioners themselves.

“This was on the books years before I ever came onto the RDC,” Smith said. “I think it’s important because it seems to have been important to a long line of RDC commissioners. So I don’t want to say today that I don’t want to do it.”

Smith, too, pointed out that a lot of money has been invested so far in terms of engineering and design.

“I think we can be open to anything, but if I had to vote today, I couldn’t vote to not do Phase III.”

Mayor Joe Yochum chimed in and said Phase III has been “cut down to the basics anyway.” It’s set to include sidewalks on at least one side and bike lanes, lighting, etc. The intent wasn’t necessarily to attract businesses but to create a nicer residential area — a road where kids would feel safe walking or riding their bikes out to Lincoln High School and Clark Middle School.

“So I’m not sure what we would even cut out of that project,” the mayor said.

Smith reminded the RDC that the original $130,000 the REM Group sought is already being worked into cashflow projections. And there are options, he said, for the remaining $170,000 they now need.

The RDC months ago made a commitment to help in building the city’s housing stock, specifically inside the Tax Increment Finance Zone, the vehicle by which the commission collects a portion of property tax dollars to reinvest within the zone.

They sought to work with developers, incentivize them to build on empty lots throughout town, and last month they agreed to help Sure Clean Inc. with a project to build more than a dozen homes in a green space off Hart Street. That commitment, too, is meant to help specifically with infrastructure costs and totals $218,000.

The RDC set aside $500,000 for such housing projects, Smith said, so the additional monies for the REM Group could come from that pot.

“We’d just have to look at that, since it is housing,” Smith said.

“That Main Street project has been a focus for years,” he said. “We’ve already cut it down to bare bones, and I would certainly hate to cut it altogether.”

RDC members agreed to make a decision on the additional funding for the Gimbel Corner project when it meets again in December.