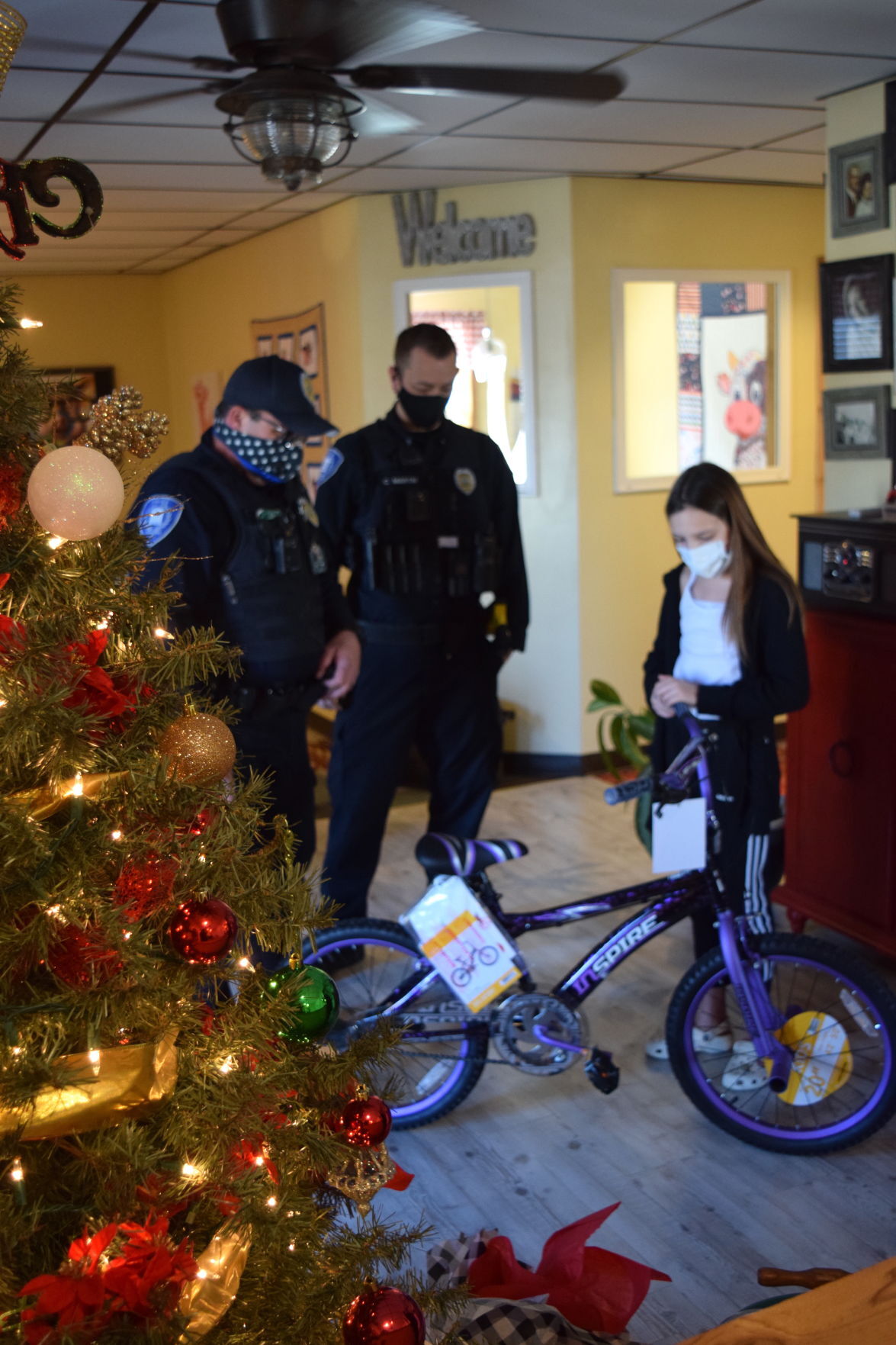 Vincennes police officers on Monday worked together to replace a bicycle stolen from a local girl. 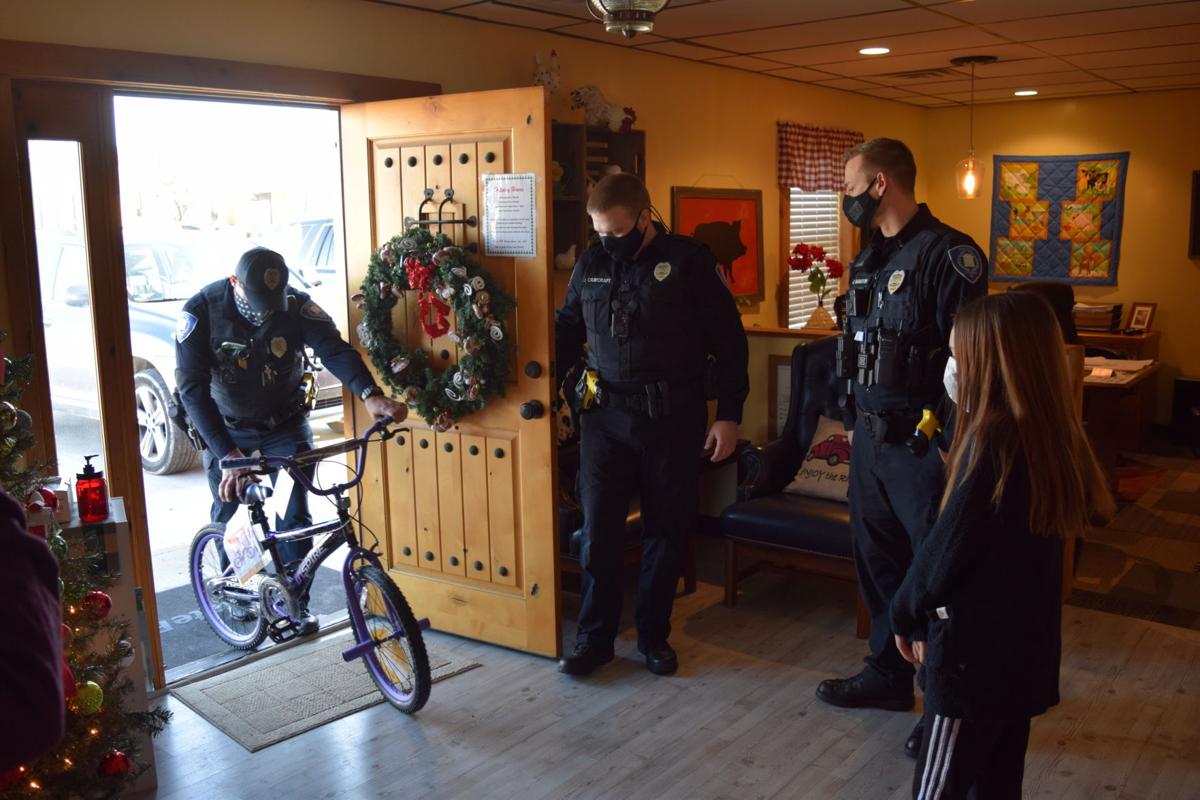 D.J. Halter with the Vincennes Police Department pushes a bicycle through the front door of a State Farm office on Old Wheatland Road. City police officers came together Monday after seeing that a local little girl’s bicycle — one she’d just received for Christmas — had been stolen.

Vincennes police officers on Monday worked together to replace a bicycle stolen from a local girl.

D.J. Halter with the Vincennes Police Department pushes a bicycle through the front door of a State Farm office on Old Wheatland Road. City police officers came together Monday after seeing that a local little girl’s bicycle — one she’d just received for Christmas — had been stolen.

Unfortunately, an 11-year-old girl woke up Monday morning to find her shiny new bicycle missing from her family’s back porch — the lock securing it sat broken, her Christmas wish stolen.

“We locked it up, and the next day it was just gone,” said young Lanie, angry that despite taking care of her new teal Mongoose bicycle, a local Grinch so easily and thoughtlessly snatched it from her.

“It wasn’t some state of the art bike by any means, but we got her a really nice new bike in her favorite color and with pegs,” said Leah Burton, Lanie’s mom. “She loved it, and we were excited to find it.”

When mom and daughter walked out the back door early Monday morning, they found nothing but the busted lock, and Burton quickly called local police to file a report.

“We called and reported it, but I don’t expect them to find it. I just wanted to do everything by the book before we go looking for the bicycle in pawn shops,” Burton said.

This, unfortunately, is not the first time the young Clark Middle School student has lost her wheels. Last summer her bicycle was stolen from her family’s property. So the Christmas gift was extra special.

Shortly after filing the police report, Burton took to social media with a photo of the stolen bicycle, asking area residents to keep an eye out.

The post, which was shared dozens of times, caught the attention of Halter who immediately sprang into action.

“I was having coffee with my dad, scrolling through Facebook and saw it pop up,” said Halter, adding that he felt compelled to help young Lanie because he imagined how difficult it would be to see one of his own children so disappointed.

“I thought about my daughter — about what it would be like if she had walked out and found her bike gone,” said Halter, choked up by the thought of it. “I had to do something.”

Though finding the stolen bicycle itself will be difficult and time consuming, Halter quickly made a call to a friend who is the regional manager of Walmart, asking for an exact replica of Lanie’s bicycle.

Santa Maria man, dog charm the world in viral TikTok video: 'I love her more than my life'

From Trump to Biden: How transfer of nuclear codes will work

He explained that he and a handful of fellow officers wanted to chip in and buy a replacement for her.

When Burton heard what Halter was up to, she was shocked.

“I couldn’t believe it. It was going to take me a couple of months to afford to buy her another one, so I was blown away,” said Burton.

Sadly, the brand and style of bicycle Lanie received for Christmas couldn’t be found.

“We called Walmart in Princeton, Sullivan, Lawrenceville, Evansville and Olney and couldn’t find the one she had,” Halter said.

Even still, Halter insisted Lanie have another bike now while he and 40 other officers continue to pursue the local Grinch who took hers away.

And, in the end, Walmart management wouldn’t accept the officers’ money; instead, they donated the new wheels.

Within hours of the the bike theft, police officers pulled into the State Farm Insurance office at 705 Wheatland Road where Lanie sat doing her e-learning studies as her mom worked nearby.

From the back end of a police cruiser came a new bicycle earmarked just for Lanie.

“We hope you like it,” Halter said, pushing it inside the office building.

Though the smiling faces in the room were masked, the joy could be clearly felt.