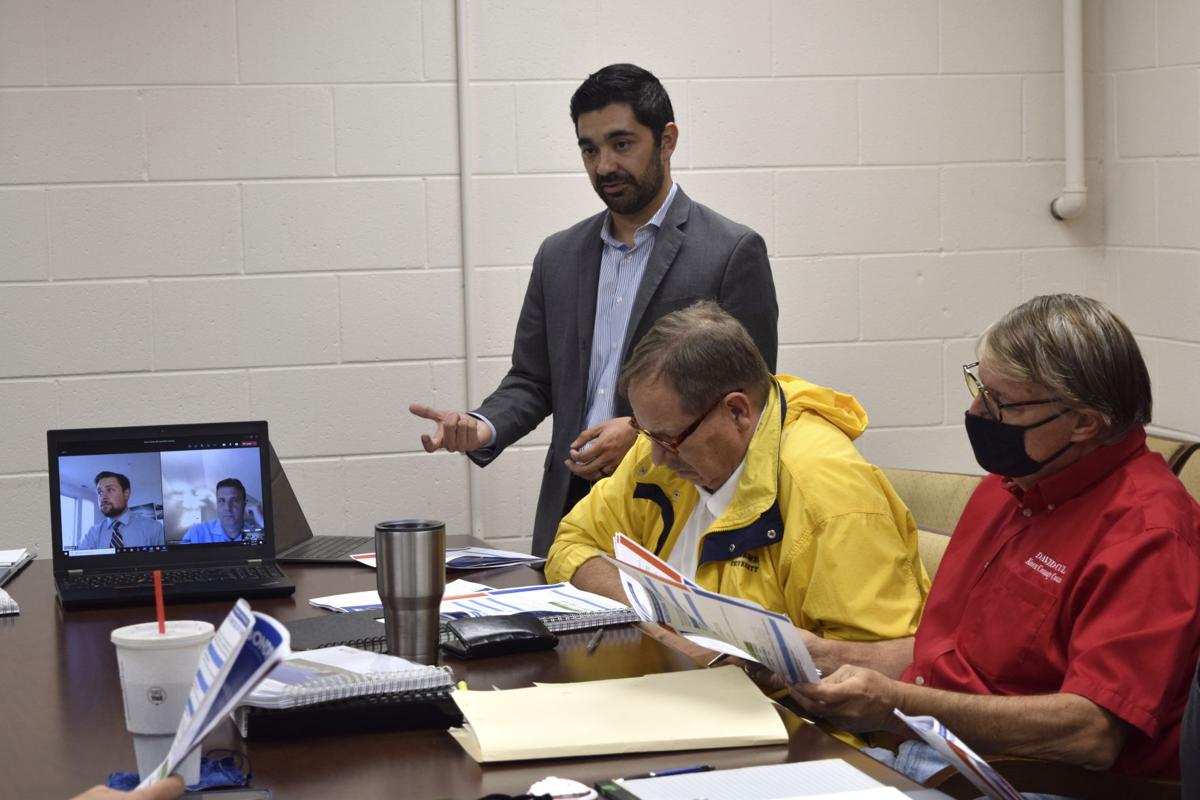 Oscar Gutierrez (standing), founder and principal of Bondry Management Consultants in Carmel, speaks to members of a jail committee, one charged with leading the way on an expansion to the Knox County Jail and a possible new home for community corrections. Also pictured are county councilmen Bob Lechner (left) and David Culp. 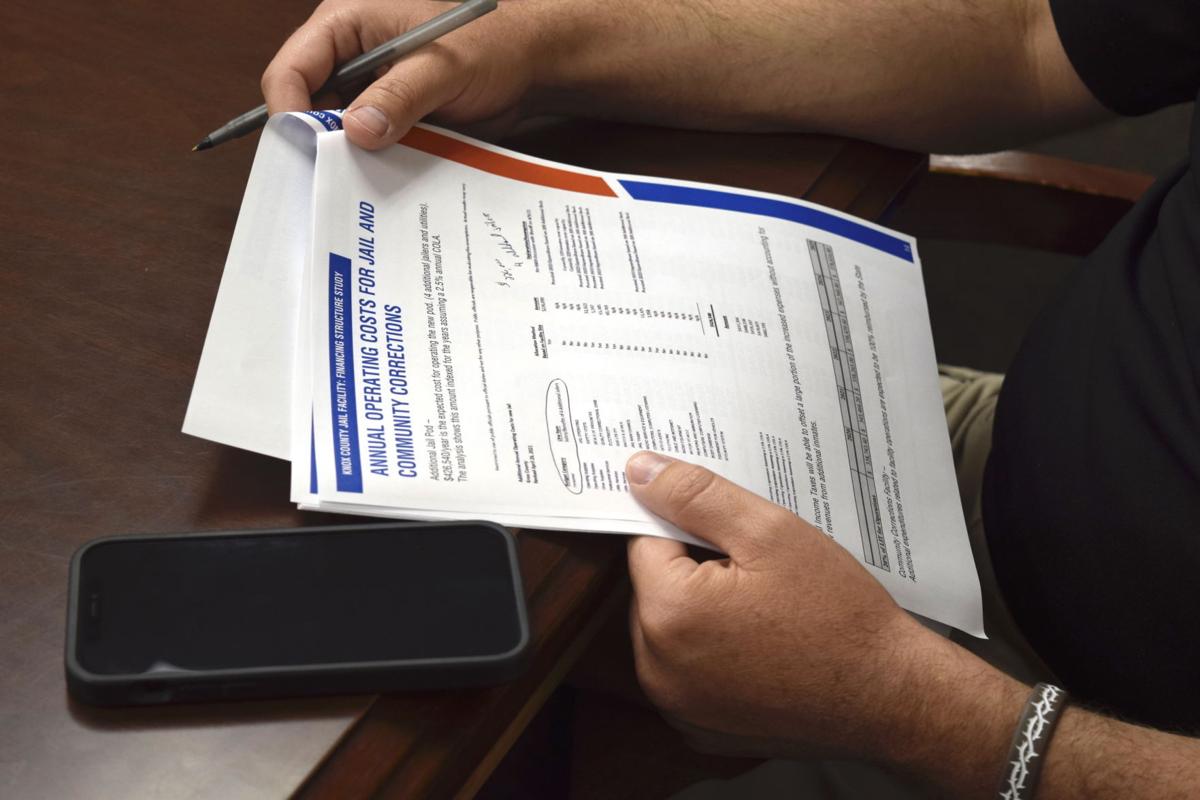 A member of the county’s jail committee flips through a document provided by Bondry Management Consultants in Carmel, one that outlines, among other things, how the county can pay for a $27 million expansion to the Knox County Jail.

Oscar Gutierrez (standing), founder and principal of Bondry Management Consultants in Carmel, speaks to members of a jail committee, one charged with leading the way on an expansion to the Knox County Jail and a possible new home for community corrections. Also pictured are county councilmen Bob Lechner (left) and David Culp.

A member of the county’s jail committee flips through a document provided by Bondry Management Consultants in Carmel, one that outlines, among other things, how the county can pay for a $27 million expansion to the Knox County Jail.

The county can likely spend $27 million on an expansion to the Knox County Jail, members of a committee aimed at forging a path forward learned from financial advisors on Tuesday.

The jail committee — a group comprised mostly of elected and law enforcement officials — met at the community corrections building and heard from Oscar Gutierrez, founder and principal of Bondry Management Consultants in Carmel, who has been looking at the county’s revenue sources and creating options on how best to finance both an expansion to the jail and a new, adjacent building to house community corrections and the probation department.

Gutierrez presented the committee with multiple financing plans, all of them taking into consideration the county’s desire to maximize on the revenue brought in by the jail tax, which was reinstated by the county council in 2019.

The best possible scenario for the county would be to leverage the income from the jail tax to bond just over $23 million and combine that with $2.75 million in cash on hand; the revenue from the jail tax has been collecting for more than a year.

At an estimated 2.4% interest, the county would be paying a debt service payment of about $1.5 million per year — using revenue from the jail tax —through 2043.

But that’s less than the $32 million design currently being considered by county officials.

RQAW has been working on a preliminary design for both the addition of a new jail pod as well as a building to house community corrections. The first, according to early estimates, could cost upwards of $20 million. The latter is estimated at $12 million.

But there is wiggle room, pointed out RQAW architect Lara Dawson to the committee.

“We feel very confident in where we are. We think there are options to adjust the design to fit the budget now that it’s somewhat established,” she said.

“We can get creative in the way we bid this,” she said, suggesting, as entities so often do, the solicitation of a base bid and a variety of alternates. “There are ways to not lose the total design concept and adjust it, on bid day, to fit the budget.”

Another option the committee discussed would be to move forward not with a completely finished jail pod but a shell instead, one that could be finished out later, as funds allow.

Commissioner T.J. Brink initially said he would be against that option, that it it would be “kicking the can down the road,” but Sheriff Doug Vantlin wasn’t completely against it.

County officials years ago had the forethought to purchase more ground than they needed at the site of the jail — ground that is now proving vital to this expansion project — so a shell pod could offer a similar scenario, he said.

“We don’t want to overextend,” the sheriff told the committee. “We have to do what we can afford.”

IA:VETERAN'S FAMILY GETS CLOSURE AFTER 70 YEARS

County councilman Rich Chattin agreed, telling the committee he thought it would be “a real loss” not to move forward with a shell pod should budget constraints force the issue later.

Architects with RQAW, too, said with a shell building and a design already in hand, it could be finished in as little as four months.

But, Dawson said, they were putting the cart before the horse, so to speak. There will be much learned during this next design phase, and priorities can be set later.

“Those decisions don’t have to be made tonight or tomorrow,” she said.

Regardless, the county will need to move quickly, committee members agreed.

Financing for the project will take months as will a final design, and Dawson told the committee, on average, construction costs are increasing by as much as $100,000 a month right now.

Its members voted unanimously to recommend to county elected officials to amend the current contract with RQAW so they can move forward quickly with a final design. Also recommended was an amendment to the current contract with Bondry so financing options — in partnership with the county’s existing bond counsel, Indianapolis’ Barnes and Thornburg — can be pursued sooner rather than later.

The commissioners, too, are in the process of working with Barnes and Thornburg to solicit Requests for Qualifications from construction management companies willing to take the jail project on.

All of those pieces need to come together in the coming weeks in order for county officials to get a even clearer picture on what is possible.

And even if everything moves swiftly, the county is still likely a year away from actually breaking ground, architects with RQAW said.

While talks have been ongoing for nearly two years, the jail committee was formed last fall to officially discuss the need for more space at both the jail, 2375 S. Old Decker Road, as well as community corrections, located in a historic downtown building on North Eighth Street just across from the courthouse.

Both are at or over capacity, and the community corrections building is in dire need of repair.

The jail committee did not immediately set another meeting date.