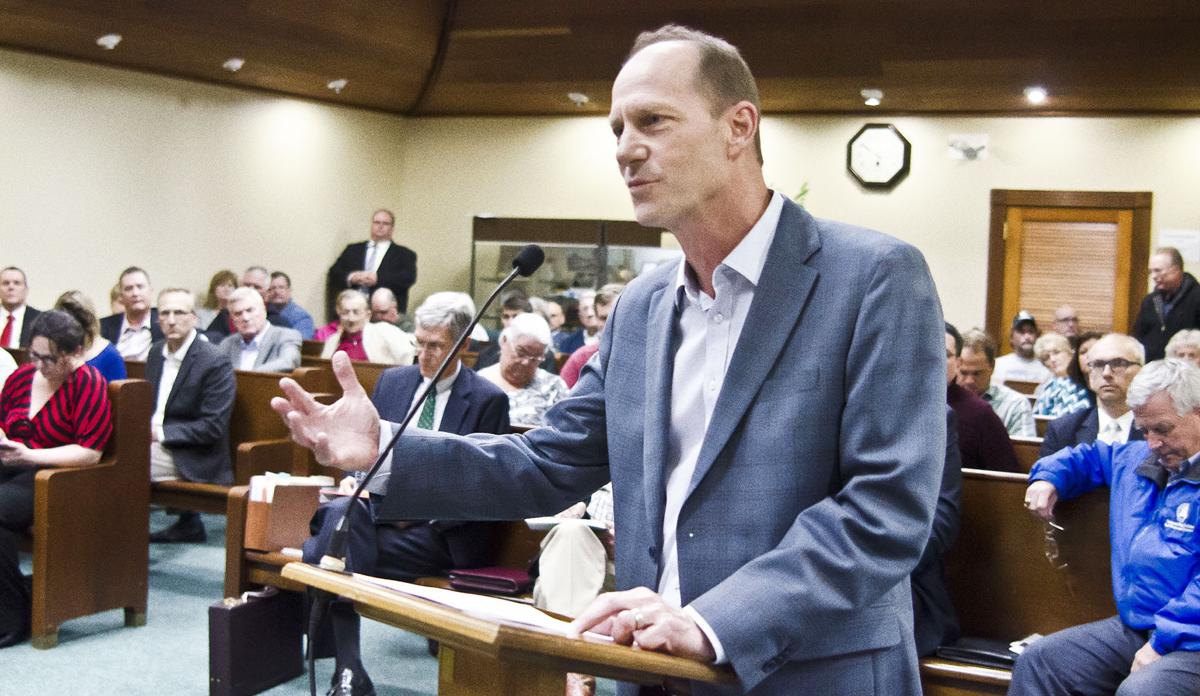 Ted Seger, president of Farbest Foods Inc., speaks to the City Council concerning the proposed rate increases for water and sewage during a public hearing Monday at City Hall, 201 Vigo St. Seger said his company would have to pay an additional $700,000 a year if the rates hikes are approved. 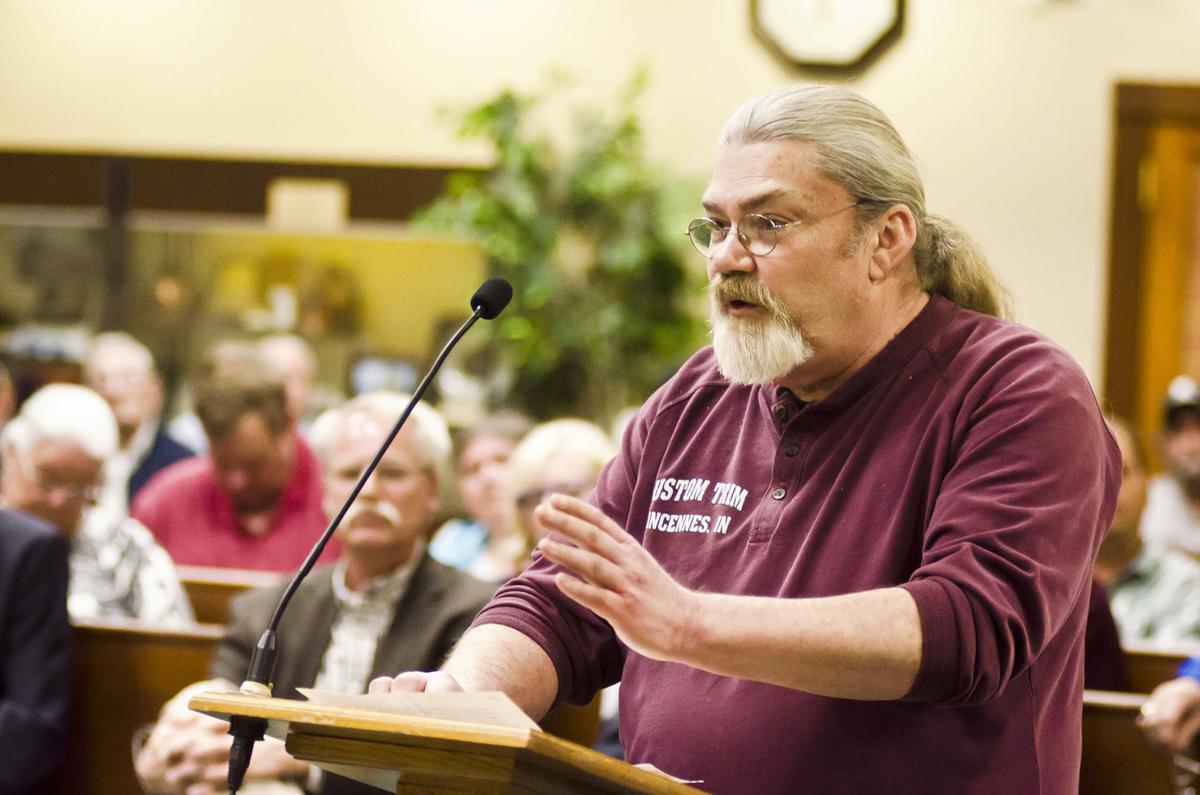 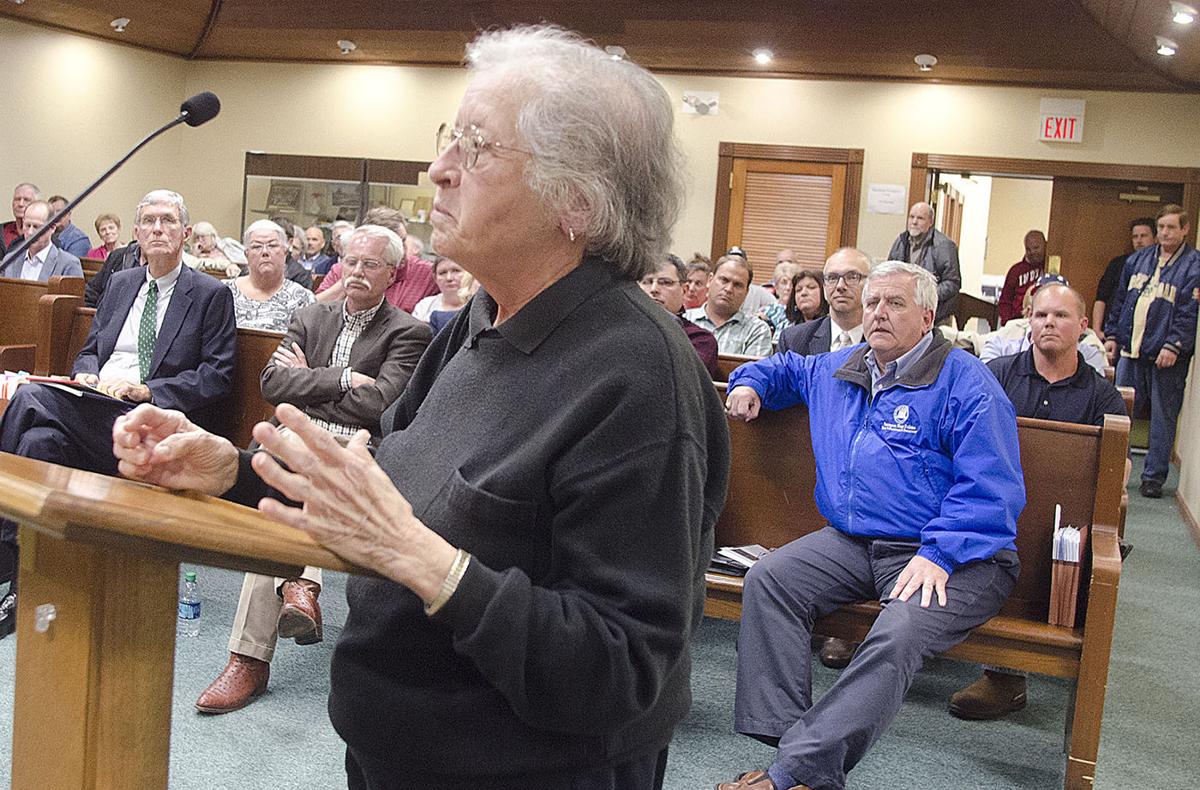 Naomi Tromley speaks to the City Council Monday night during a public hearing on proposed increases in water and sewer rates. Tromley was concerned that seniors on a fixed incomes would not be able to afford the 50-percent increase that is proposed by the Utilities Services Board for capital improvements to water and sewage infrastructure.

Ted Seger, president of Farbest Foods Inc., speaks to the City Council concerning the proposed rate increases for water and sewage during a public hearing Monday at City Hall, 201 Vigo St. Seger said his company would have to pay an additional $700,000 a year if the rates hikes are approved.

Naomi Tromley speaks to the City Council Monday night during a public hearing on proposed increases in water and sewer rates. Tromley was concerned that seniors on a fixed incomes would not be able to afford the 50-percent increase that is proposed by the Utilities Services Board for capital improvements to water and sewage infrastructure.

Too much, too fast.

Seger was the first to speak during a public hearing held Monday night at City Hall, 201 Vigo St., asking for 12 minutes instead of the usual three since Farbest's turkey processing plant in the U.S 41 Industrial Park provides 20 percent of the revenue collected by Vincennes Water Utilities each year.

Since opening two years ago, Seger said Farbest has “lived up to its end of the bargain,” providing more than the 300 jobs it promised and investing $100 million in Knox County.

But the proposed rate increase, he said, will cost Farbest another $700,000 per year.

“It's going to be difficult for us to absorb that,” he told members of the city council. “And I would suspect that that kind of rate increase is going to be hard for the average household to absorb, too.”

Seger said he understood the need for capital improvement projects — the Utilities Services Board wants to spend $20 million on various upgrades, including a totally new drinking water plant — but he asked the council to consider a pause.

He took issue with what he considers to be relatively “short notice” in regards to the rate increase. The USB approved the measure on March 16, and the council is expected to take it back up tonight. He also said there had been a “lack of transparency,” as Farbest had requested certain documents that it had yet to receive.

He also cited what he considered to be “flawed data” in the USB's financial report from Crowe Horwath. He argued that Farbest will likely pay more — perhaps 12 to 20 percent more — than the pro forma (or sample) year used for revenue projections, and he doesn't believe the cost reductions made by proposed improvements were factored into the report either.

The purchase of more radio-read meters, he argued, will result in cost savings not offered in the report.

He also took issue with the 10-year amortization of the bonds — perhaps longer would mean less of an increase for customers — and the inclusion of $2.5 million to pay back the Knox County Development Corp. for fronting of the cost of more than $4 million in infrastructure improvements needed in the industrial park for Farbest's arrival.

Seger said Farbest was “guaranteed” it wouldn't have to take on any of that cost as an incentive to locate in Vincennes.

In short, Seger said the USB was simply biting off more than it could chew. “Four or five major capital improvements at once,” he said, would place undue stress on the management.

His suggestion was for the council to create a temporary review committee to look more closely at the issue over the next 30 days. And he asked that Farbest, being the city's biggest user, have two seats at that table.

Seger also agreed — since more time will likely mean more costs — to fund the first $10,000 of any additional costs incurred by waiting.

“But we remain 100 percent committed to the community and to its continued growth in everything we do,” he finished.

The USB's financial consultant, John Skomp, in rebuttal to Seger's comments, said he had kept in close contact over the last week with Farbest and that there had been “a lot of transparency” regarding the proposed rate increase.

The timeline, he said, was within the perimeters set forth by state statute and that the pro forma year, given usage fluctuations at Farbest in its first two years of operation, was “appropriate.”

And had rate increases been phased in over the last decade, as many suggested during the hour-long hearing, customers would be paying about the same anyway.

“So the only people who have benefited,” Skomp said, “have been the customers.”

'Is there a contradiction?': Acosta presses DHS secretary about policy

Nancy Pelosi asked about special relationship with the UK

Skomp also discouraged the council from considering Seger's suggestion of forming a special committee. The USB, he said, has already done all the leg work and come up with the “solution they feel is best.”

Other residents took to the podium after Seger's comments, but many of them said Seger expressed well their concerns.

Tony Riley, for instance, a relatively new water customer, called the proposed 50 percent increase for combined water and sewage bills “a little extreme.” And Matt Roush, a local business owner, said he took pride in the fact that Vincennes has some of the lowest water rates in the state.

Members of the USB have argued that a rate increase is needed to make the improvements and that doing so only brings Vincennes to the middle of the pack in terms of rates in comparably-sized communities.

“But (low rates) are one of the reasons Farbest decided to move here,” Roush said. “If we have the same rate as everyone else, then why choose Vincennes?”

Another local resident, 82-year-old Naomi Tromley, too, asked why all the capital improvement projects had to be done at once, and Tom Smith, a local landlord, said the proposed increase would be “catastrophic” for property owners like himself.

Several, however, spoke in favor of the rate increase.

Phil Rath, Vincennes University's vice-president of finance and governmental affairs, said while the university is the USB's fourth-largest customer he wanted to express his support.

At some point, he said, “you have to put your trust in the people who have run the numbers.”

KCDC president Kent Utt also expressed support for the project, saying the proposed increase — which would make the average family's combined water and sewage bill about $71 per month, is still less than the state average of $76.

And up-to-date infrastructure, buildings and systems free of repeated state and federal citations, he said, is imperative to his organization's ability to attract new industry.

Vincennes has the 88th lowest household income in the state.

Marc McNeece, president of the Knox County Chamber of Commerce, said his board, too, wanted to encourage the council to do whatever it takes to make sure existing business owners — and ones in the future — have clean, safe drinking water.

The council will hold its regular meeting at 6 p.m. today at City Hall. They set aside Monday's public hearing to hear from concerned residents, and tonight they will resume their own discussions.

The rate increase has been approved on first reading, but the legislation requires a second and third reading before final.

Projects included in the $20 million plan include $5 million for a new drinking water plant and another $4 million to ready the Waste Water Treatment Plant to better rid phosphorous from waste water before it's deposited into the Wabash River.

Both are unfunded mandates being handed down by the Indiana Department of Environmental Management.

The USB also wants to use remaining monies for “pay-as-you go projects,” specifically the restoration of the city's water towers and the purchase of more radio-read water meters.