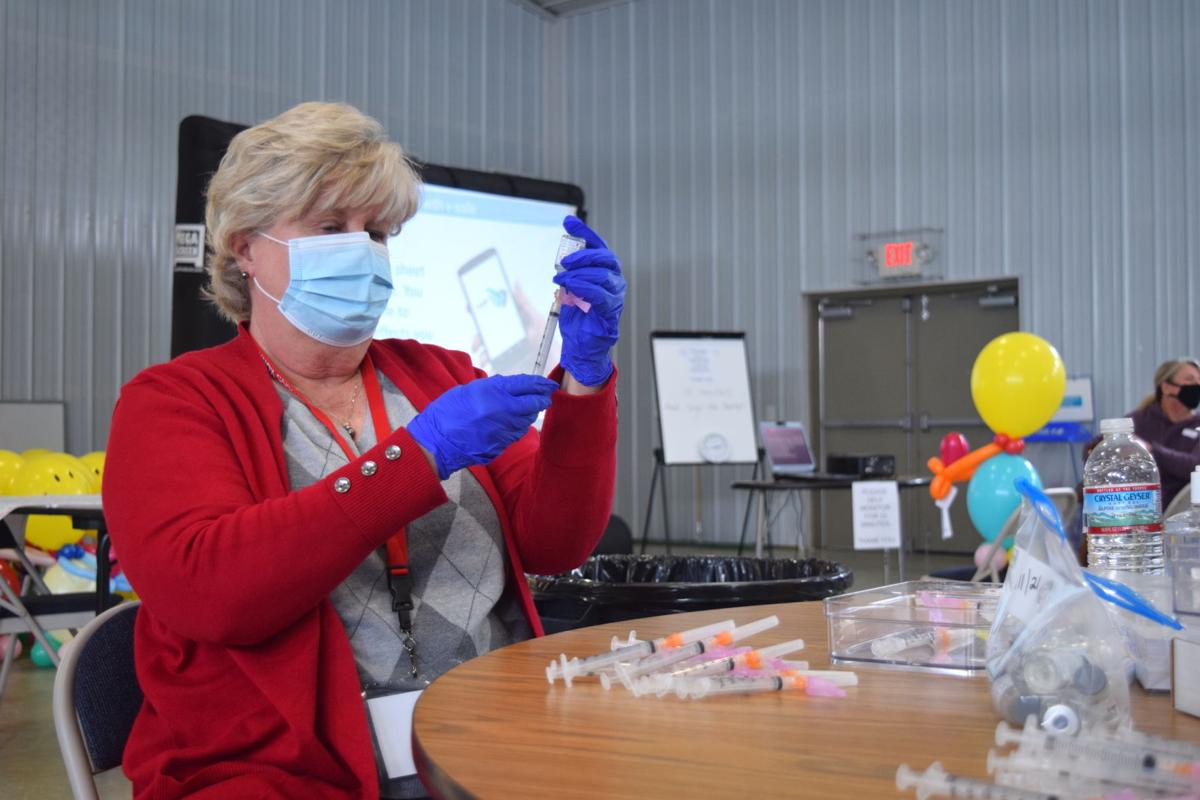 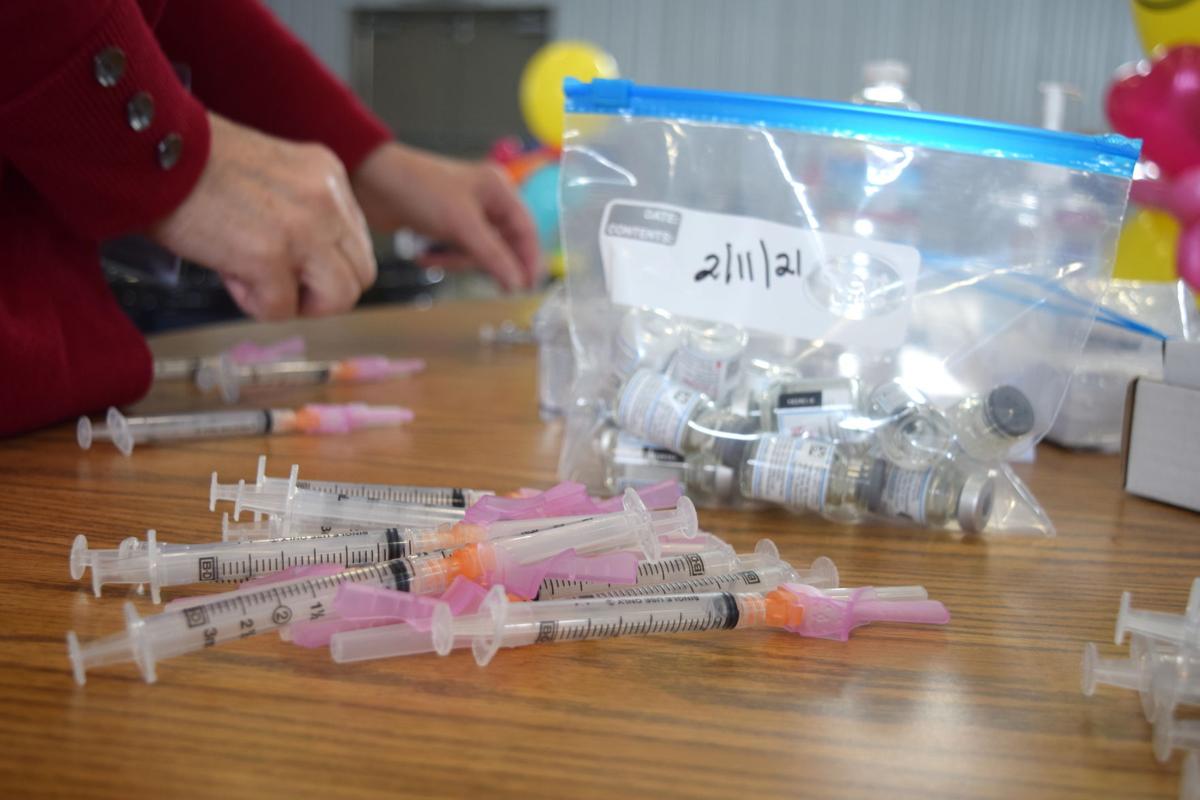 Several syringes and vials of the Moderna COVID-19 vaccine await visitors to the Knox County Health Department’s clinic on Hart Street Road on Thursday afternoon. The clinic is now giving more than 100 doses a day.

Several syringes and vials of the Moderna COVID-19 vaccine await visitors to the Knox County Health Department’s clinic on Hart Street Road on Thursday afternoon. The clinic is now giving more than 100 doses a day.

State officials on Wednesday announced that they would continue taking a data-driven approach to the rollout of the COVID-19 vaccine, opening eligibility up to those over the age of 60 next week and those over 50 in the weeks following.

“If you ask 100 people about the vaccine roll-out, you’ll get 100 opinions,” Thacker said, “but if we continue centralizing our decisions around data, it removes those biases and concerns.

“So, yes, I think approaching it from a prevention of morbidity and mortality is the soundest and most ethical and clinical way to approach this.”

Indiana health officials next week are expected to expand coronavirus vaccines to Hoosiers aged 60 to 65 as they continue to sidestep federal recommendations and delay the timeline for teachers and other essential workers.

The decrease in the age of eligibility will happen “as soon as possible,” once vaccine becomes available, the state health department’s chief medical officer, Dr. Lindsay Weaver, announced Wednesday.

Hoosiers aged 50 to 59, as well as those under age 50 who suffer from certain comorbidities, will then be on deck, Weaver said, although there are no specific timelines yet in place.

“After we reach age 60, when we have enough vaccine and have vaccinated an appropriate portion of the 60 to 65 age group, we will then incrementally expand eligibility,” Weaver said, noting it will take time to vaccine a group that includes some 432,000 people.

Both Thacker and county health officer Dr. Alan Stewart say the state’s approach — while criticized by some — does seem to be working; caseloads and death rates are dropping across the state, as well as right here in Knox County.

New case daily totals have remained in the single digits. The infection rate and number of active cases continues to fall as well, and Knox County remains listed as yellow —or the second-to-least severe category — on the state’s COVID-19 dashboard.

Thacker said Knox County represents a “microcosm” of what the entire state has and is experiencing in terms of COVID-19 morbidity.

“Fifteen% of our positives have been in those 70 and older, but that same population represents 80% of our total deaths,” he said.

“So the state’s approach to the vaccine roll out aligns with Knox County’s own data.”

Stewart, too, said the state has done “a good job” in determining who should first receive the COVID-19 vaccine. The approach, he said, is both “scientifically and politically correct,” and as a result, both the state and Knox County in recent weeks have seen decreases in the number of new cases and hospitalizations.

“So the vaccine is helping,” he said. “(The roll-out) might not be exactly what everybody wants right now, but it’s working. It’s taking a scientific approach and keeping things organized in a chaotic climate.”

Dr. Kristina Box, the state health commissioner, said Indiana is currently receiving about 100,000 doses of vaccine each week. But because that supply “remains limited,” the current eligibility hierarchy for those aged 65 and up will continue at least through this week.

“This way, we can fully analyze the number of second dose appointments against our existing and our projected inventory,” Box said. “Our goal is to ensure that we have all of these second doses covered before expanding further.”

Indiana officials have based shot eligibility on age rather than moving up teachers and other essential workers as other states have done. They cite statistics that those ages 60 and older represent 93% of Indiana’s COVID-19 deaths and 64% of hospitalizations, arguing that vaccinating those people will have the biggest impact.

Looking ahead at the 50 and older population, the state’s top health officials maintained the age group makes up just over 35% of Indiana’s population, but accounts for 80% of COVID-19 hospitalizations and 97.6% of deaths

Why bitcoin could triple over next year

The course of action is in contradiction to guidelines released by the Centers for Disease Control and Prevention, however, which place teachers ahead of those 65 to 74 years old, along with grocery store and public transit workers, and others.

“We’re being very methodical about this,” Republican Gov. Eric Holcomb said Wednesday. “The way that we’re scheduling appointments here is accommodating, both to the consumer — the person wanting to get the shot in their arm — and our supply.”

So far, 737,000 Hoosiers been vaccinated against COVID-19, according to state health department statistics. Of those, 258,000 have received both doses.

Locally, more than 6,200 have received the first dose; just under 3,000 people are now fully vaccinated.

Nearly 1.4 million vaccination appointments have been scheduled since December, Box said. Sixty-eight% of eligible health care workers and first responders have so far received or scheduled vaccine, Box said. In addition, nearly 81,000 doses have been administered to residents and staff at the state’s long term care facilities.

Here in Knox County, Thacker said the Good Samaritan COVID-19 vaccination clinic continues to receive about 1,000 doses of the Pfizer vaccine — which is being limited largely to hospitals because it requires ultra-cold storage — and more are possible in the coming weeks.

Currently, he said, the hospital is averaging about 1,700 shots per week.

“And just like a lot of other clinics across the state, we can do more if we have more vaccine,” he said, adding that Good Samaritan’s team is “ready to take on” the lower age groups in the coming weeks.

The county health department’s COVID-19 vaccine clinic located at Community United Methodist Church on Hart Street Road, however, is averaging just about 400 doses of the Moderna vaccine each week and will likely limit itself to only second doses during the entire month of March, officials there have said, unless supply unexpectedly increases.

Thacker, however, is hopeful as the FDA is expected to grant emergency authorization to the new Johnson and Johnson vaccine by the end of the month.

That vaccine, he indicated, is a game changer as it only requires basic refrigeration and reaches full efficacy with just one dose.

“It’s already being used in other countries and has good safety and efficacy data,” he said. “It has the potential to make a big impact in the vaccination of Hoosiers.”

The state Department of Health on Wednesday also announced that Indiana has surpassed 12,000 coronavirus-related deaths after the state’s three deadliest months during the pandemic.

Officials added 52 recent coronavirus deaths to the statewide total, pushing it to 12,001 fatalities including both confirmed and presumed COVID-19 infections.

The state Department of Health’s weekly tracking map updated Wednesday labels only Switzerland County in far southeastern Indiana in the highest-risk red category. That is down from 73 of the 92 counties in that category four weeks ago.

This week’s map lists 40 counties in the next-riskiest orange category.