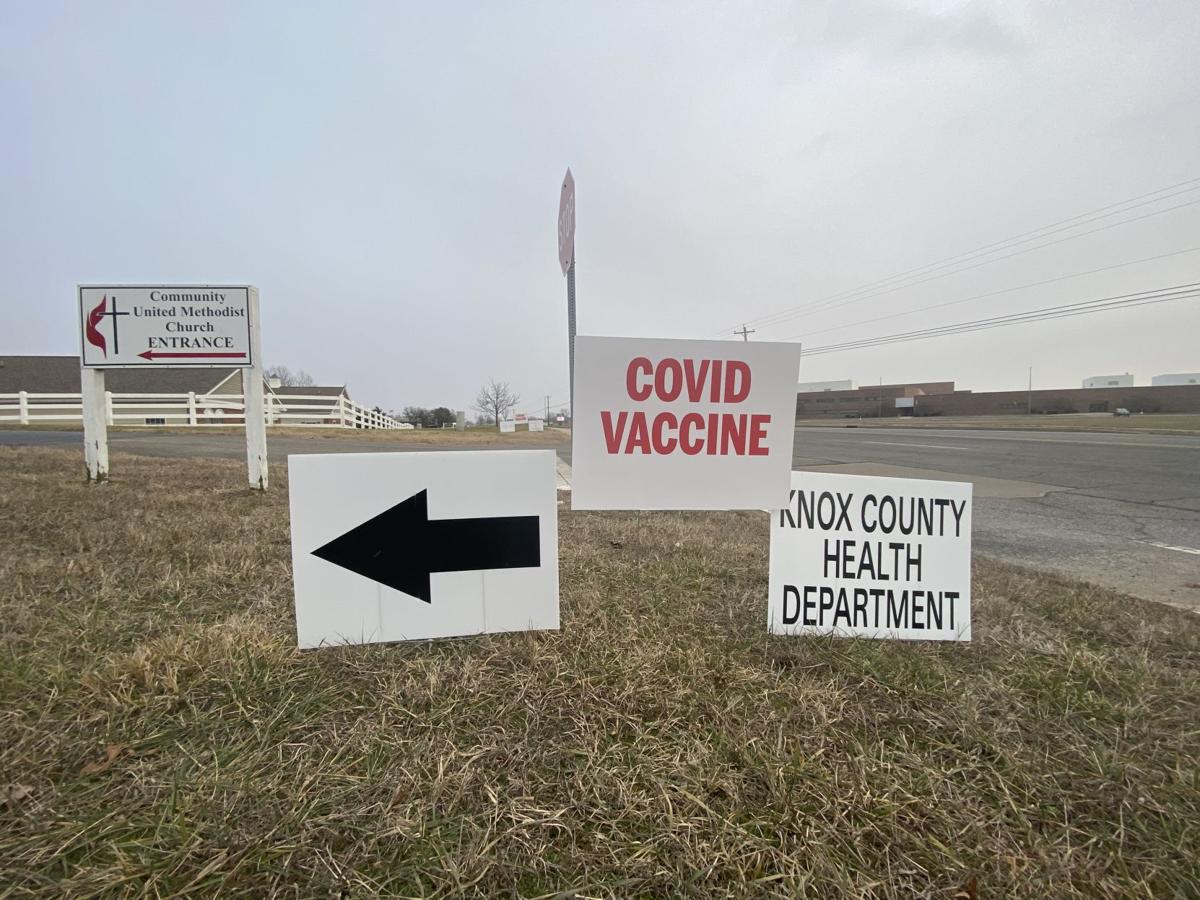 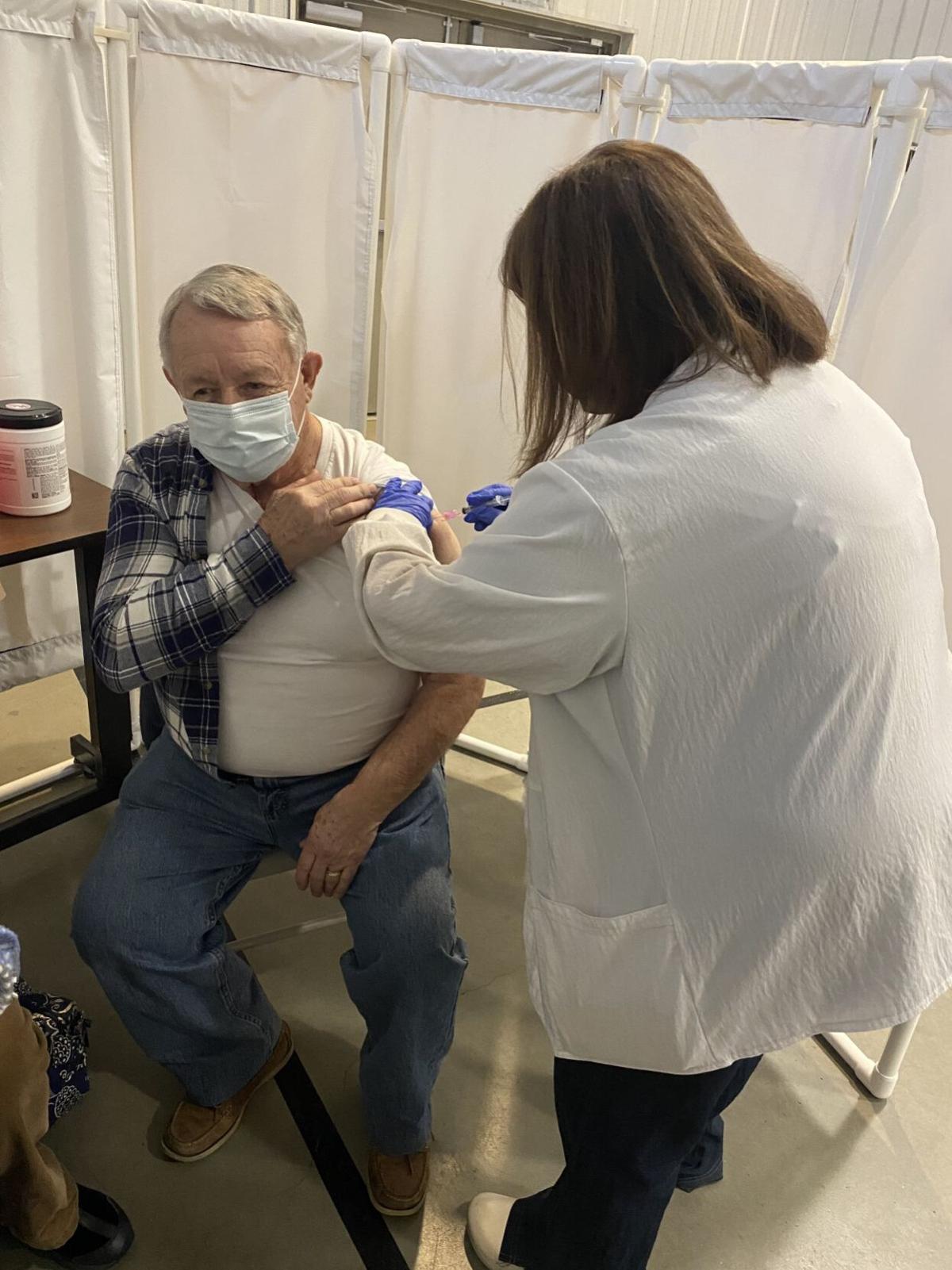 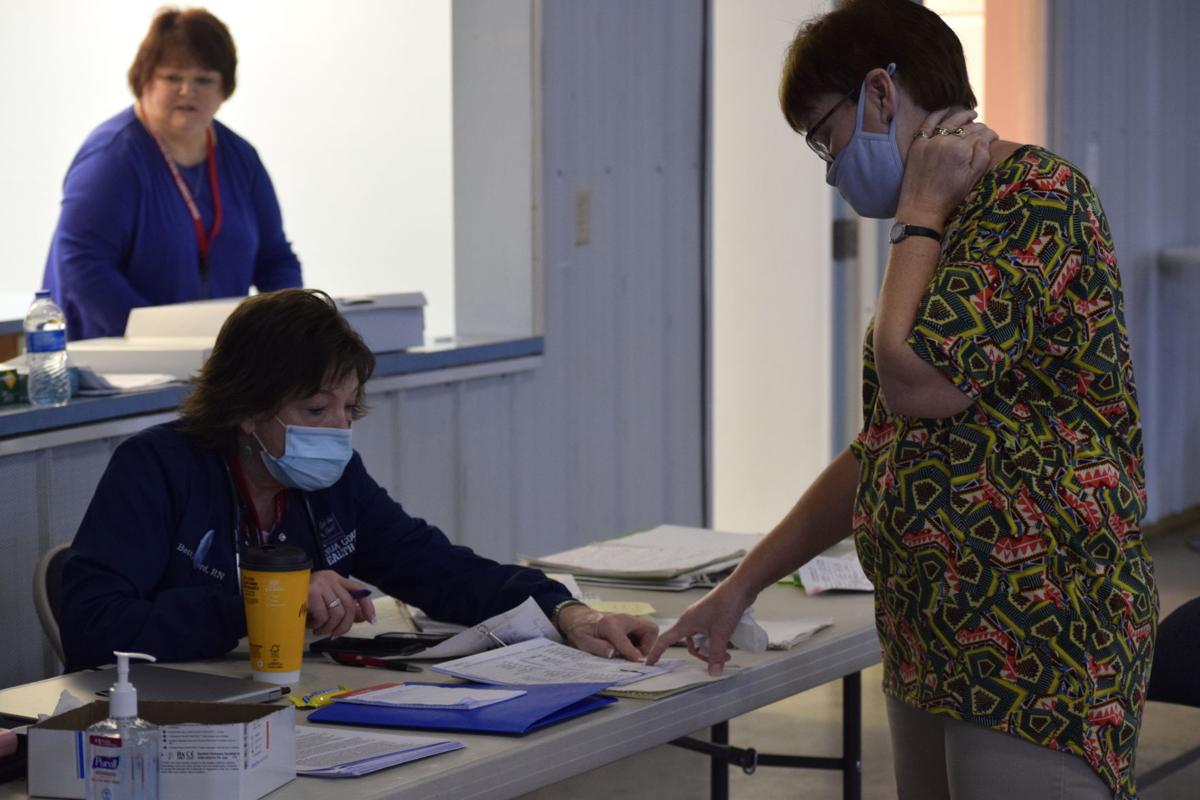 Seventy-year-old Tom Cronk smacked the “I got the shot” sticker on the chest of his black coat and let out a sigh of relief.

“That was really easy,” he said, “wasn’t complicated at all.

“I was greeted at he door, a lady asked me a few simple questions, ones that could be answered with either a driver’s license or insurance card. A nice nurse named Peggy and I chatted for awhile, she stuck me in the arm and we were done.

“Then I got my sticker,” he said with a proud smile.

Cronk was one of about 100 people over the age of 70 expected to receive COVID-19 vaccines Friday at the Knox County Health Department’s clinic set up in the community building adjacent to the Community United Methodist Church on South Hart Street Road.

But the process this week for the many volunteers and nurses working there has really been anything but uncomplicated.

Up until Friday morning, officials even thought they would have to close the clinic for much of next week due to a lack of vaccines.

“There is some uncertainty as to how many vaccines we will get moving forward,” said the health department’s lead COVID nurse, Betty Lankford.

The clinic opened on Monday, and after a full slate of appointments today, Lankford said they will have administered 700 vaccines in its first full week of operation.

Officials with the State Department of Health, however, told them to expect only 100 doses for next week; as a result, they were going to open the clinic on Monday, put those 100 shots into the arms of those over the age of 70, and close for the rest of the week.

State officials were assuming local clinics would be set up to do about 100-150 per week; the local clinic, however, is set up to do that in a day, according to county health officer Dr. Alan Stewart.

So Stewart said he and others became something of a “squeaky wheel” to state officials, even sending them photos of the clinic space and inviting the governor for a personal visit; Good Samaritan, too, “went to bat for the local clinic,” Stewart said.

And in the end they were able to secure 300 more doses of the Moderna vaccine Friday morning, meaning they’ll be able to give out 400 next week.

“We are already booked through next week,” Lankford said, adding that she has been told they will get another 400 doses for the week after that.

“But that may be all we get (per week) moving forward,” she said. “I just don’t know. It changes all the time.”

That could, however, bode well for Knox County as officials have said the demand for vaccines could dictate the supply.

After just a small percentage of healthcare workers actually signed up to receive the vaccine early on, local officials say the response from those 80 and up — and then 70 and up this week — has been overwhelming.

Lankford said the elderly have come out to the clinic without appointments — and at all hours — wanting information on the vaccine.

For now, she said, they are directing them to the state website (www.ourshot.in.gov) to schedule appointments or to call 211.

And while some are reporting hour-long wait times to schedule an appointment, Cronk said when he went to make his appointment early this week, he found a rather smooth process.

“I asked for the first available, and it gave me 11:30 a.m. today,” he said Friday. “I did go ahead and look at Saturday, but it was booked already.”

Lankford said the clinic has been a place of joy this week as those 70 and older are eager to get the vaccine.

“They are not apprehensive,” she said. “They are eager. They are desperate.”

Stewart, too, said the elderly are coming to the clinic with “open arms,” pun, perhaps, intended.

“And it’s so nice,” he said. “I’m seeing a lot of old friends, former patients, and they’re so grateful.

“These people know polio. They know measles and mumps. I think some young people just don’t realize how serious these diseases are.”

Stewart is hopeful that what has so far been something of a logistical nightmare will get smoother as the weeks progress.

“It’s exciting,” he said. “It just hasn’t been as organized as I’d hoped.”

According to the State Department of Health’s COVID-19 dashboard, Knox County recorded an additional nine cases of the novel coronavirus Friday, bringing the total now to 3,241. More than 200 of those cases are considered active.

There were also nine new cases reported on Thursday; Wednesday, however, saw an additional 53.

There have been 39 COVID-19 deaths so far, and the county remains in the red, the most severe designation on the state’s dashboard.

Being red prohibits any gatherings of 20 or more people.

And while daily totals have been something of a moving target, Stewart said he does believe the county has been experiencing a post-holiday surge.

But with more and more vaccinations delivered every day — more than 2,400 have received their first of two doses — Stewart is hopeful the end is near.

Hospitalizations, he said, are lessening. There are currently only 15 hospitalized with the coronavirus; seven of those are from Knox County and only one is on a ventilator.

“That’s a lot better than we were doing,” he said.

Stewart, too, pointed to some recent statistics that show 6-7% of all Knox County cases are in those 80 and older. That same age group, however, represents 60% of the deaths from COVID-19 so far.

“And that’s the population we’re getting vaccinated right now,” he said, “so that will make a huge difference.”