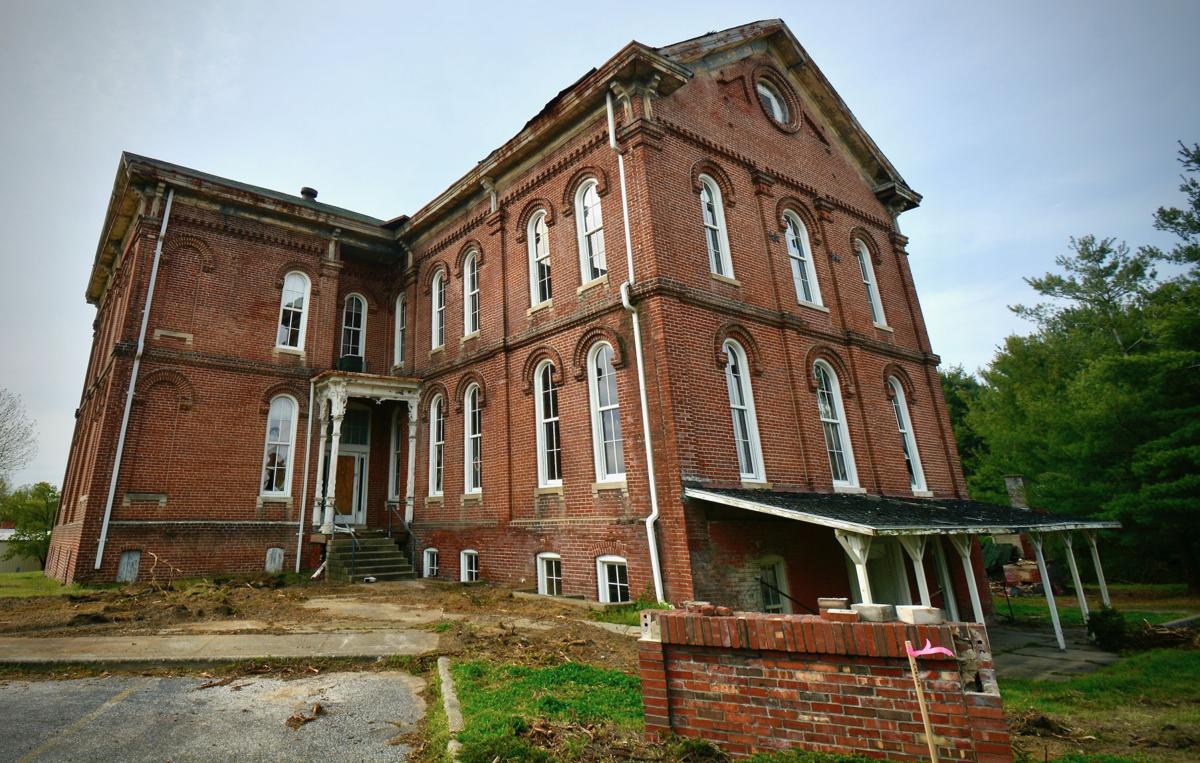 The county commissioners say they will request $250,000 from the county council to help fund the efforts of Andy and Angie Barmes to re-purpose the old county poor farm on Hart Street Road as a hospice. The 140-year-old Victorian structure has been mostly abandoned for more than a decade. 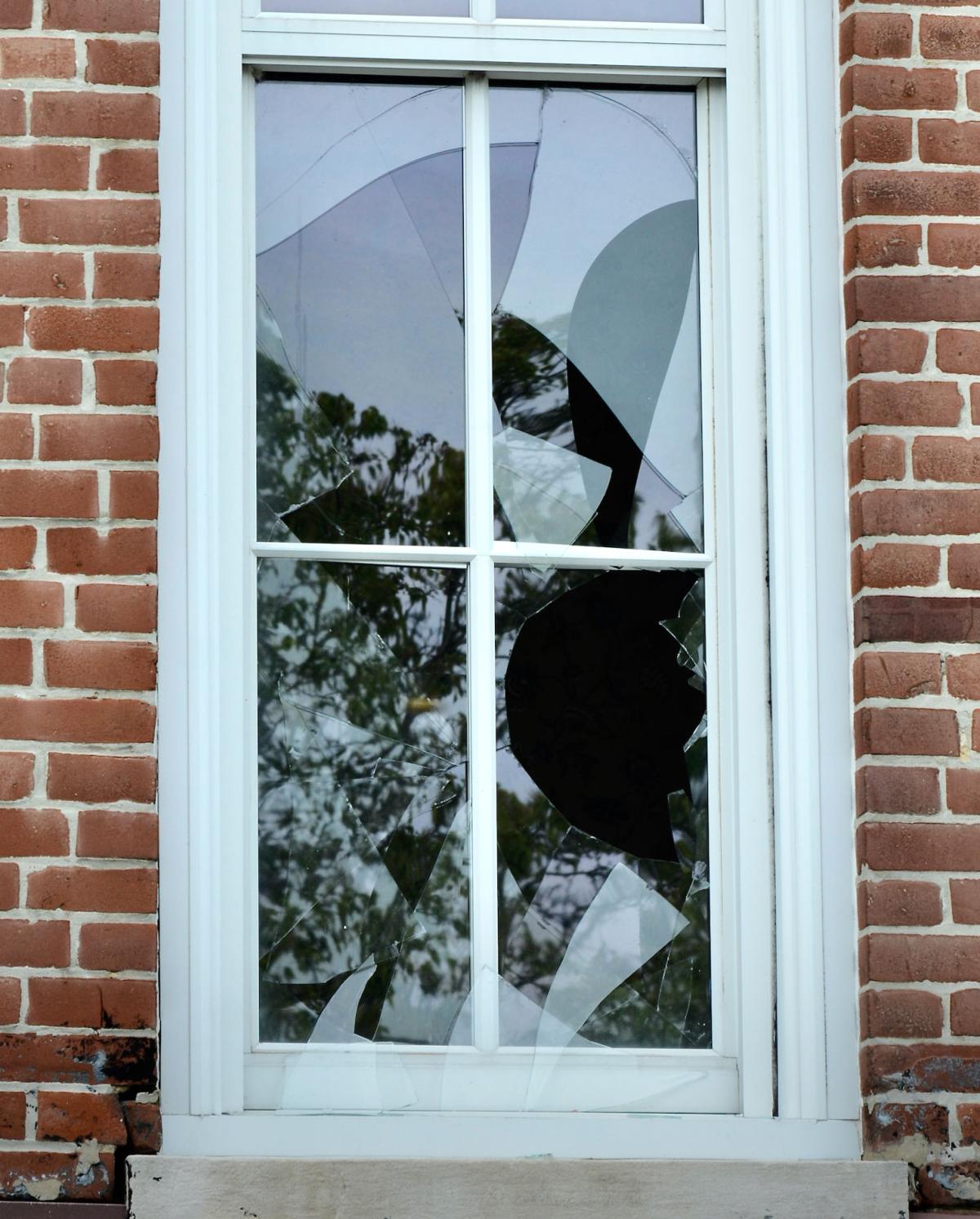 Broken windows at the old county poor farm attest to the 140-year-old Victorian building's having been abandoned for more than a decade. Vincennes residents Andy and Angie Barmes, a contractor and local nurse, hope to re-purpose the building as a hospice.

The Knox County Commissioners had already agreed to give the deed to the old county poor farm to a local couple wanting to restore it into a hospice house.

Tuesday they expressed their desire to give the husband and wife team money to help with the project.

Andy and Angie Barmes, a contractor and local nurse, went back before the commissioners on Tuesday asking for assistance in fixing the roof on the 140-year-old Victorian building on Hart Street Road.

The damage, Andy Barmes told the commissioners, is extensive and will take significant funds to repair.

After looking at it more closely, Barmes said it would take upwards of $5,000 in structural steel alone just to stabilize the attic so the roof itself can be replaced.

And he was hoping the county would agree to help.

“I’m literally afraid it’s just going to collapse into a heap,” he said.

The commissioners agreed they were largely responsible for the condition of the building; they had neglected it — out of sight, out of mind — for years, left to for the elements to rot.

“We’re going to have to come up with some money to get a roof on there,” said commissioner Tim Ellerman. “At the very least, we need to get the money gathered up to get that thing dry.

Ellerman, a local contractor himself, has been a huge proponent of the Barmeses taking the project on. Andy Barmes, Ellerman has said, is one of the few he would trust to take on such a monumental endeavor.

So it’s been his opinion that the county should do everything in its power to help, even hand over money to do it.

“Most people would take one look at that (building), turn around and drive the other way,” Ellerman said.

Commissioners Kellie Streeter and Trent Hinkle didn’t disagree, but cutting the Barmeses a check to help with the repairs would take cooperation from the county council, the county’s fiscal body.

“We do not have budgeted funds to help,” Streeter said, “so whatever we decide will have to be appropriated.”

The commissioners opted to recommend the council to give the Barmeses a total of $250,000 — at least.

And Ellerman was confident the council would see the project through similar eyes.

“I think they’ll do this,” he said of the council. “Everybody from the commissioners on down have turned their back on this property. And we’re not going to find someone like Andy who will come along and take it on.

“We need to provide the funds for him so he has the tools to get this done.”

Hinkle agreed, saying it likely would have cost a significant amount of money to tear the sprawling structure down should it have come to that.

“And then we’d just be left with the bare ground from something else we let fall down,” he said. “So the county has to be involved here.

“The time has come to put an end to (the neglect) and get it fixed up, make it a treasure instead of a travesty.”

The Barmeses are the latest among many who have looked at the facility with a desire to re-purpose it.

Most recently, the commissioners rejected a proposal from Adam Kimmell, producer and director of "Resident Undead," a paranormal documentary show on You Tube.

The Pennsylvania-based ghost hunter first expressed his desire last fall to take over the old poor farm, turning it onto a ghost- hunting attraction, but the commissioners just wouldn't get on board.

Years ago, the commissioners gave the deed to the poor farm — with stipulations — to local pastor Sandy Ivers as she hoped to turn it into a shelter for women.

The project was largely forgotten, that is until Kimmell's unexpected request caused the commissioners to look more closely into that agreement to see if it was still valid, especially since the property was still in a serious state of disrepair.

But Ivers eventually said she was no longer interested in the building and it reverted back to the county.

When Indiana became a state in 1816, the constitution contained a provision for counties to establish poor farms. Then, in 1821, the General Assembly authorized eight commissioners to purchase a farm "for the purpose of it using it to house paupers," according to the Division of Historic Preservation & Archaeology.

Around that time, a log cabin-type structure was built out on what's now Bunker Hill to serve as the poor farm and a modern brick building replaced it in the 1850s.

The poor farm stayed in that location until 1881, when an arsonist burned down the building. The county purchased the present poor farm site shortly after that and started constructing a new building designed by Joseph Frick, an architect out of Evansville.

The county's poor farm continued serving as a home for the less fortunate until the 1920s, when it was turned over to Purdue University and converted into a "model farm," an early predecessor to the current extension system.

The poor farm residents were moved into a building on South First Street until 1935, at which point the county decided the city building wasn't working and bought out the lease with Purdue.

But by the 1960s, the farm had sold off most of the acreage and wasn't functioning as a farming operation anymore.

Later, the building was used as office space for KCARC, during which the organization paid for many improvements to the aging structure, including putting in a new heating system, plumbing and electrical, all while leasing it to the county.

But at some point, it became clear that maintenance on such an old building simply wasn't cost-effective if KCARC couldn't take ownership down the road.

Eventually, KCARC let its lease with the county run out, and the building has been abandoned since.

Is there a long term and sustainable plan for this building? Will the county get a return on investment other than another old building that will eventually be abandoned and back to a state of disrepair? I would prefer this money go to residential property owners to fix up current eye sores or be used to demolish them.