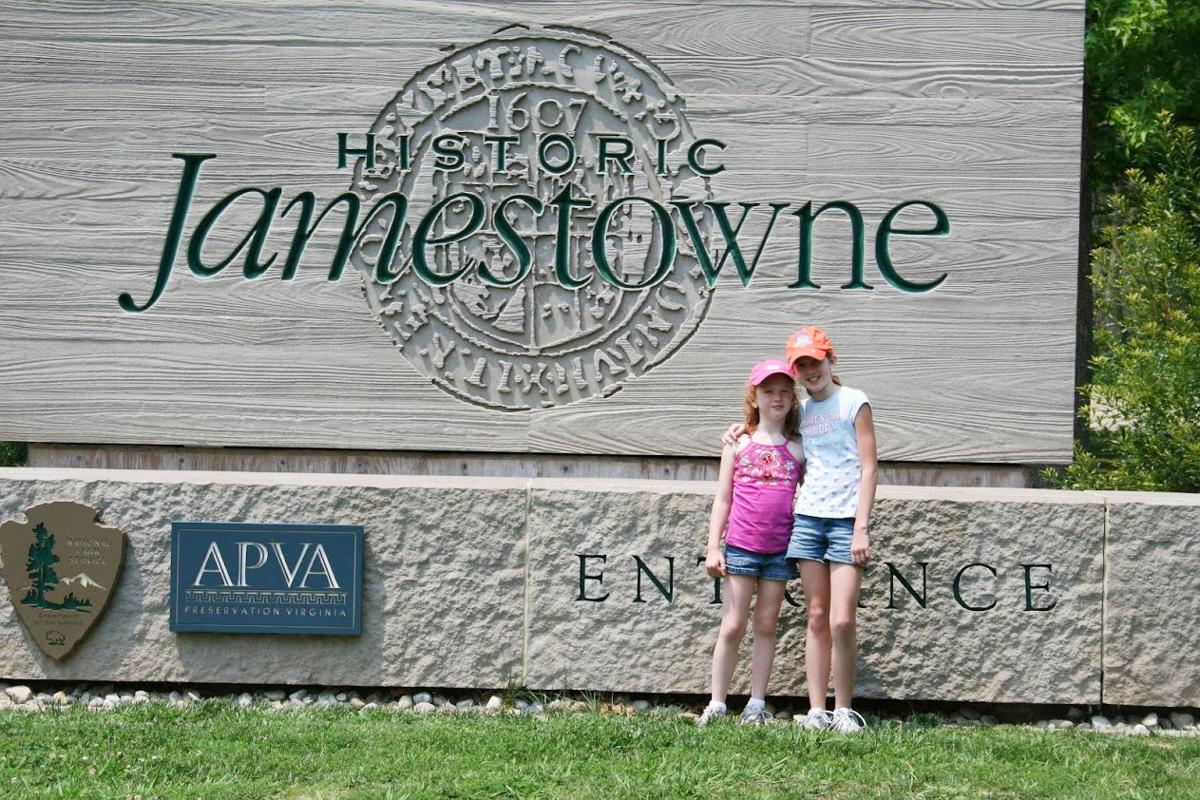 Sun-Commercial contributed photo | Jessi, left, and Alli Donovan, here just 8 and 10 years old respectively, visit historic Jamestown, Virginia, as part of an American history-themed vacation back in 2007. The adventure kicked off a years-long effort by them and parents Karl and Ann Donovan, Vincennes, to visit all 50 states. They visited their final state, Alaska, this summer. 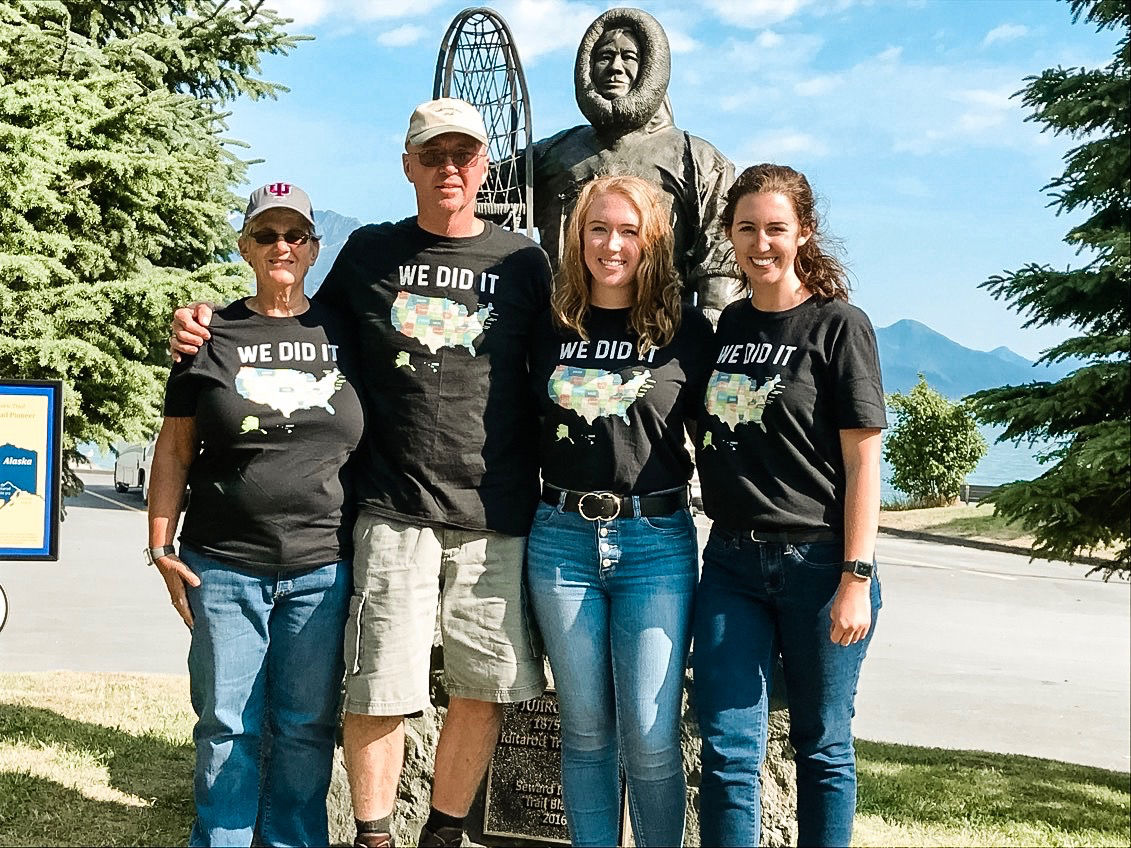 Sun-Commercial contributed photo | Members of the Donovan family of Vincennes — mother Ann, father Karl, and daughters Jessi and Alli — traveled to Alaska this summer, bringing an end to a 12-year effort to visit all 50 states.

Sun-Commercial contributed photo | Jessi, left, and Alli Donovan, here just 8 and 10 years old respectively, visit historic Jamestown, Virginia, as part of an American history-themed vacation back in 2007. The adventure kicked off a years-long effort by them and parents Karl and Ann Donovan, Vincennes, to visit all 50 states. They visited their final state, Alaska, this summer.

Sun-Commercial contributed photo | Members of the Donovan family of Vincennes — mother Ann, father Karl, and daughters Jessi and Alli — traveled to Alaska this summer, bringing an end to a 12-year effort to visit all 50 states.

Donovans have made knowing their country a family affair

If you ask him, Karl Donovan can call on the memory of something special, even something quirky, from all 50 states.

He can name every mountain range, every state park, every novelty stop across the country.

“Wyoming, a lot of people don't even think about Wyoming, but it's absolutely beautiful,” he said, the memory bringing a wide smile to his face. “There's the grand Tetons, Yellowstone (National Park), the landscape, all of the rock formations. And you just see animals running alongside the road.

“We also went to this corn palace — an actual palace made out of corn — just outside Mount Rushmore in South Dakota,” Donovan added with a chuckle. “Cadillac Ranch in Texas was pretty neat. And in Maine, there are lobster stands everywhere you look.”

Twelve years ago, Karl and Ann Donovan of Vincennes took their two young daughters, Jessi and Alli, on an American history-themed trip to the East Coast. The girls, then just 8 and 10, were studying the early colonies of Virginia, Massachusetts and Pennsylvania, among others, so they planned a trip to show them, in person, all they'd been reading about in school.

“When the kids were really little, we'd take little trips here and there, not with any real purpose,” Karl, a carpenter at Good Samaritan Hospital, said. “They'd just be small things — things outside Vincennes. They seemed to enjoy the trips, so in 2007, we took them on the American history-themed vacation. We went to Jamestown and Yorktown and Washington, D.C. We hit Philadelphia, Maryland, West Virginia, Virginia — just started on the east side and worked our way up.”

“We went into Delaware, too. We thought, 'We have to hit Delaware,'” Ann, an elementary school teacher, added. “And really that's where it all started.

“We began putting stars on a map.”

During the next trip, the Donovan family flew west to Seattle. Another, they traveled to Las Vegas, rented a car and toured the southwest. They followed the Colorado River, made stops at the Grand Canyon, Death Valley and the Hoover Dam.

For yet another gtrip, the destination was Boston, and from there they drove up the coast to Maine. On yet another trip they hiked the waterfalls of Oregon.

Their very first stop, after renting a car, of course, is always to a grocery store where they fill up a cooler with cold drinks and the fixings for all the peanut butter and jelly sandwiches they can eat.

“Then we just drive,” Karl said, his hand cutting their air in front of him. “We drive until we run out of time. Then we spend the night then get up and go again.”

Along the way, the family incorporated as many national parks as possible, Karl said, and, their collective favorite, destinations based on scenes from the popular movie, “Forrest Gump.”

“We try to stop everywhere Forrest has been,” Karl said.

“Wherever he goes, we go,” Ann added with a smile.

The family visited the spot in South Carolina where crews filmed Vietnam War scenes in “Forrest Gump” as well as bridges and mountain ranges Tom Hank's character crossed and passed by during his cross-country run.

“And the little town where he grew up, Greenbow, Alabama, we showed up there,” Karl said. “They took one look at us and said, 'You're here to see the Forrest Gump stuff, aren't you?'”

They kept their eyes peeled, too, for oddities, working in the country's biggest pop bottle, its largest ball of twine, and Karl even made an attempt at that 72-ounce steak at Big Texan Steak Ranch in Amarillo.

As they marked states off their list, they inched closer and closer to having visited all 50.

The only state they traveled to separately was Hawaii as Ann and Karl had gone as newlyweds; Jessi and Alli went to visit with an aunt a few years ago so they, too, could mark the islands off their list.

Even as the girls grew — Alli is 22 and living in Indianapolis, Jessie, is 20 and a student studying biology at Ball State University — they would plan their summer vacations around their goal to see all 50 states.

And this summer, they finished with a final trip — their 15th — to Alaska.

“It was the farthest, the most expensive so we saved it for last,” Karl said. “But we wanted to be sure we were all together, there on that last one.

“We flew into Anchorage, visited Seward, did a marine tour, did some hiking on top of glaciers, visited two national parks. It was great.”

When it was all said and done, the Donovans felt immensely proud — and a little relieved.

So which state are their favorites?

Karl, rubbing his knees and pursing his lips in thought, said he couldn't narrow it beyond the western states; he loves them all. Perhaps Utah, he said, with its breathtaking national parks and mountain ranges.

“I like them all,” Ann said, her voice warm with memories. “But I'd have to say South Carolina. I just love the coast. I love the palm trees.”

Looking back, the experience of traveling to all 50 states helped them to grow, both as individuals and as a family. As their lives got more and more hectic, these vacations offered a reprieve, two weeks where they could focus on one another and on opening their minds to a new landscape and the experiences that went along with it.

“The fact that we got to experience all that as a family is really neat,” Karl said proudly.

“And the girls, they're best friends. They never fight,” Ann added. “So that made it easy.

“They are up for anything, they didn't roll their eyes when we stopped to see the largest fork in the U.S. — which we have,” she said with a laugh. “The whole experience tied us together as a family.”

“I don't know,” Karl said as he leaned back in his chair. “It's been such a buildup to this point. We're not sure what we'll do next.”

On the short list, however, is a trip back to see more of California as well as the checking off of a few more national parks. Karl would love to see Yosemite and Sequoia & Kings Canyon.

Jessi and Alli say they'll continue to tag along, as least as long as they're able. And Alli, for one, has her sights set on an even bigger goal.

“I'd like to focus on going out of the country,” she said with a shy smile. “I wouldn't even mind visiting all seven continents.”

“She's got plenty of time,” Karl said with a wink.