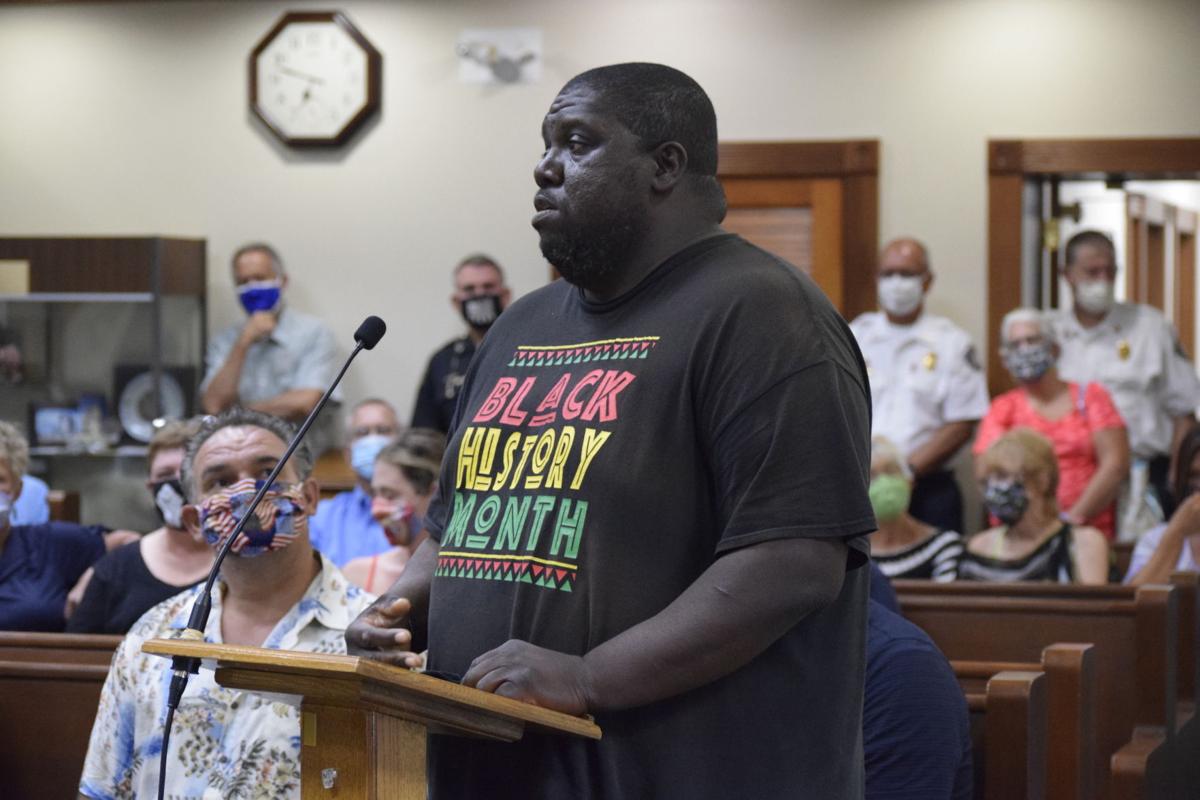 DeAngelo Ivory, a Vincennes resident, speaks to members of the city council Monday night about his support of the national Black Lives Matter movement. 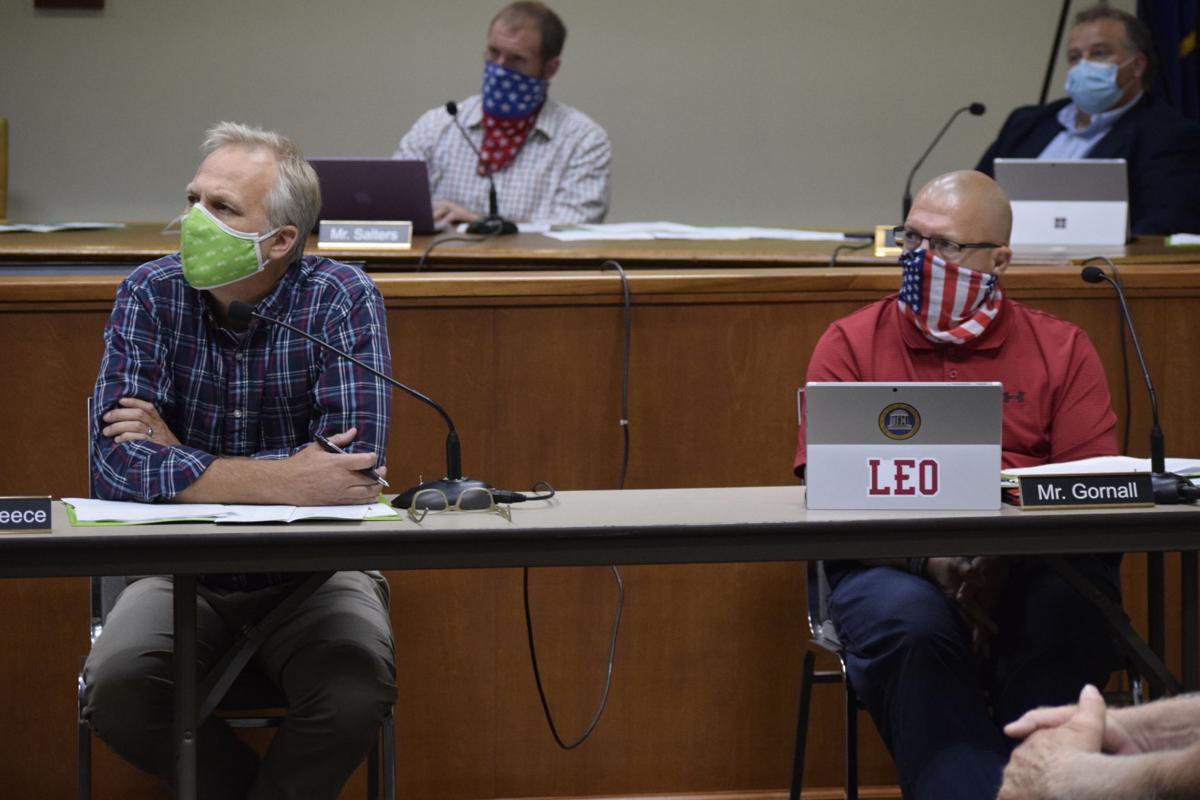 City council members Marc McNeece (left) and Ed Gornall listen as local resident DeAngelo Ivory talks about his support for the Black Lives Matter movement. Council members heard both from those in support of the national movement as well as those who sided with Gornall, who last week declined his server a tip and wrote “All Lives Matter” on his receipt at a Bloomington restaurant.

DeAngelo Ivory, a Vincennes resident, speaks to members of the city council Monday night about his support of the national Black Lives Matter movement.

City council members Marc McNeece (left) and Ed Gornall listen as local resident DeAngelo Ivory talks about his support for the Black Lives Matter movement. Council members heard both from those in support of the national movement as well as those who sided with Gornall, who last week declined his server a tip and wrote “All Lives Matter” on his receipt at a Bloomington restaurant.

Last night’s city council meeting made clear that the distinct divide between members of the Black Lives Matter movement and counter protesters seen on the nightly news across America also exists in the heart of Indiana’s oldest city.

After city councilman Ed Gornall’s “All Lives Matter” tip in Bloomington received viral attention 10 days ago, hundreds of area residents weighed in on the issue on social media.

Gornell visited Mother Bear’s Pizza in Bloomington, where he was served by an unidentified man wearing a protective face mask that read “Black Lives Matter.”

A photo of a receipt for the meal posted online — with Gornall’s name and signature clearly visible — shows the councilman declined to tip the server, but included the words “All Lives Matter” in all caps at the bottom of the receipt for the server, sparking a quick wave of outrage.

The incident was captured and shared online by Illinois resident Scott Wheeler, who noted in his Facebook post that Gornall is a member of the Vincennes City Council.

While some residents attended the meeting to support Gornall’s constitutional rights to free speech and the “all lives matter” mantra, others weighed in with vehement opposition of his statement and began an online petition calling for his resignation, which has garnered more than 350 signatures thus far.

During the public comment segment of Monday’s council meeting, several residents stepped to the podium to remark on the councilman’s statement.

Much of the first hour of the regularly scheduled council meeting was a volley back-and-forth between supporting voices for Gornall and those arguing the necessity of the Black Lives Matter movement.

As with other cities across the country, no resolution or agreement was reached, and members of council, including Gornall, remained silent.

Vincennes resident Marsha Fleming began by showing support for the Black Lives Matter movement, which has gained momentum across the U.S. in recent months after the killings of unarmed Black citizens, such as Ahmaud Arbury and Breonna Taylor.

Fleming, calling it a movement at the “fore of American consciousness,” said that while Gornall has the right to his opinion and to free speech, he also “has a responsibility as a councilman to represent this city.” Fleming questioned whether or not Gornall’s representation is one the other members of council want for the city.

“This incident should induce the members of this council — individually and as a body — to examine your own personal biases.

“I would encourage all council members to remember every day that your constituents — here and now — are not all straight, white, cis-gendered, Christian men, even though everyone of you are,” said Fleming.

In response to Fleming and others who called the District 2 councilman’s comments offensive, other residents stepped forward to support Gornall’s statement.

Eugene Williams of Vincennes said that he sees all human lives as equal and never thought of anyone as different.

He then added that he feels the goal of the Black Lives Matter movement is “to destroy our country,” before saying the local BLM movement is led by a self-proclaimed “Marxist and queer.”

Lydia Duncan, Bicknell, said she, too, supports Gornall’s right to freedom of speech.

“You had every right to say all lives matter because they do,” she said to Gornall. “I understand the Black Lives Matter movement itself and the history behind it, but as I look around this room right now, I’d say I’m the minority.

“But I only consider myself one thing, part of the human race — not as Korean American or Asian American,” Duncan said.

As tensions continued to mount, local resident DeAngelo Ivory, took to the podium and invoked the work of Congressman John Lewis — who passed away last week at the age of 80 — as an example of a man who “gave his service and his life to make sure everyone has equal rights.”

Ivory left members of council with one final thought. “Our nation right now — there is a battle for our souls,” he said.

Stacy Hampton said she was “disgusted” at Gornall’s statement. As a Black woman and the mother of a Black son, she said she’s been accosted many times for the color of her skin in the 25 years she’s lived in Vincennes.

She also expressed frustration at the council’s overall lack of response to Gornall’s actions.

Councilman Marc McNeece did post to his social media page days after the incident that he disagreed with Gornall’s statement and called for his resignation, but he eventually removed his post.

“If all lives matter then why does the word black offend so many people in this room?” Hampton asked.

She went on to say that the council’s quietness was sending a “crystal clear” message to all people of Vincennes — that Black people should feel “grateful” just to live here even though they’re not fully “included.”

“Enough is enough,” she said, “and someone needs to speak.”