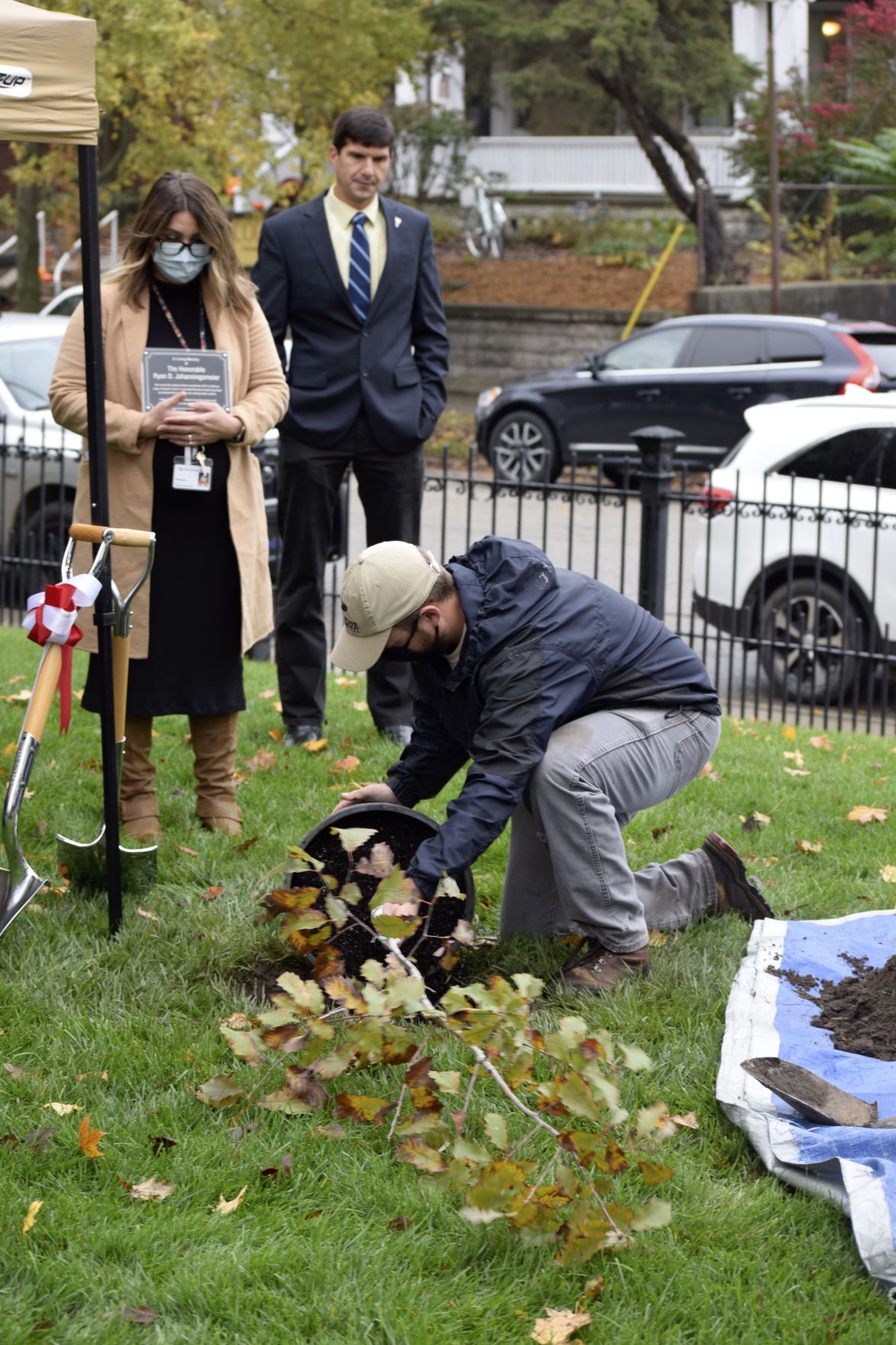 Will Drews, the county’s natural resource specialist, plants a Chinquapin Oak tree on the lawn of the Knox County Courthouse on Tuesday evening. A group led by Vanessa Phillips, the Knox County Recovery Oriented System of Care coordinator, held a brief ceremony Tuesday to dedicate the tree to the memory of the late Superior Court II Judge Ryan Johanningsmeier, who was killed in a plane crash in August. Also pictured are Phillips (left)) and Joe Williams, coordinator of the county’s Drug Court program, which Johanningsmeier started after being elected in 2015. 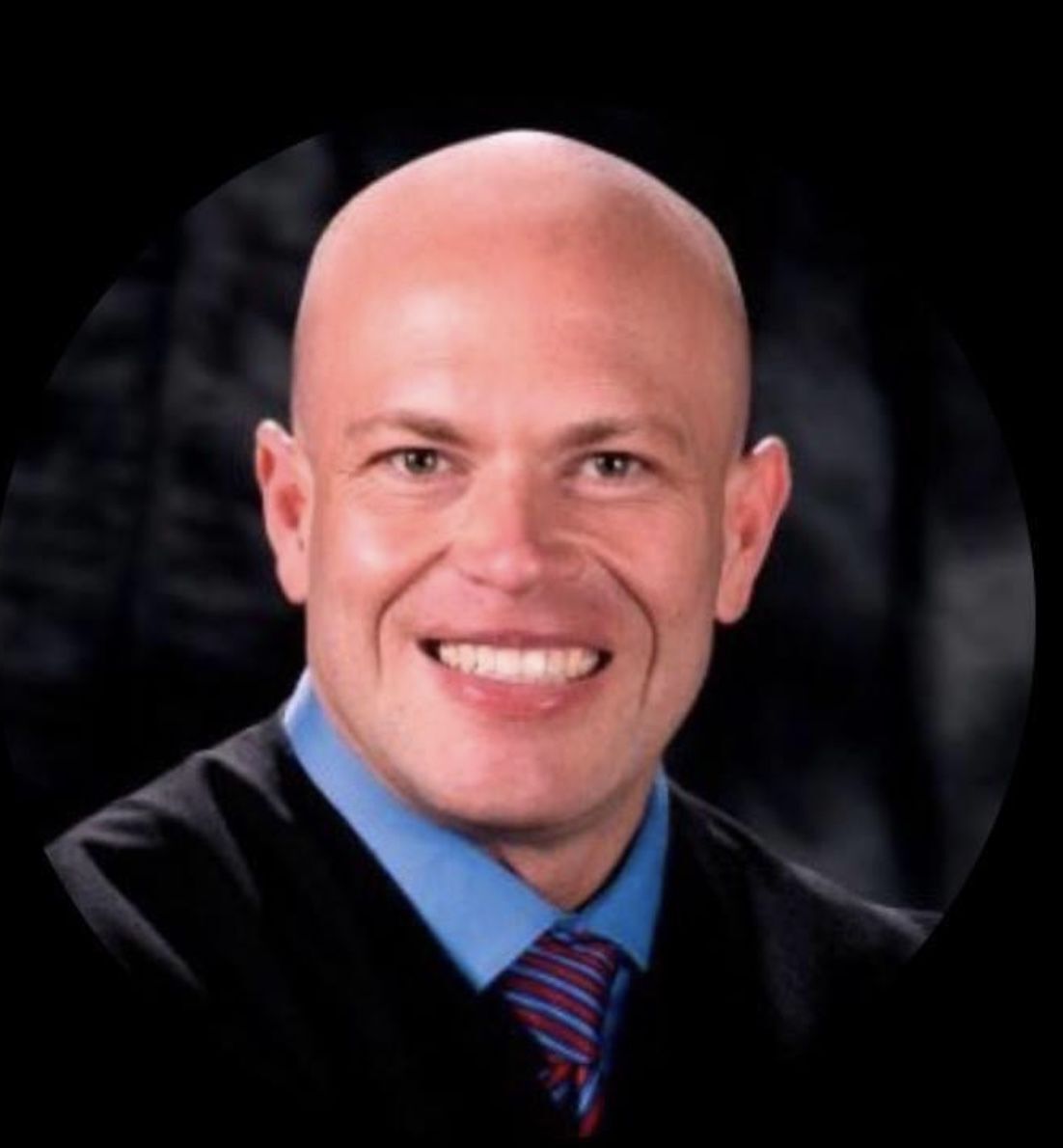 A handful of community leaders and elected officials on Tuesday gathered on the lawn of the Knox County Courthouse to remember their friend and mentor, the late Superior Court II Judge Ryan Johanningsmeier.

The Chinquapin Oak tree, Phillips told the crowd gathered in the cool, drizzling rain, is one of the largest native oak trees of this area. It will grow to be about 50 feet tall and have a spread of 60 feet when fully mature — a giant of a tree just like the man it’s meant to honor.

“This tree’s life span can be well over 100 years,” she said, her voice breaking, “continuing to nourish the community for generations to come — just like the effect the judge had in the five years he sat on the bench, impacting many families, community members and colleagues.

“By the same token,” she continued, “this tree and Ryan will have a long lasting influence on this community and the court.”

He was first elected in 2015, running on a platform of starting a Drug Court and working to aid people through the recovery process.

He built a network of justice officials, law enforcement, social service and mental health experts that worked to help people through their addictions.

He was just finishing his first term — and was running for a second — when he died.

Wanting to honor his memory, Phillips reached out to Will Drews, the county’s natural resource specialist, for help in identifying a tree to plant.

Here's what Giuliani's former colleagues say about him now

Drews was on hand Tuesday to help plant it, alongside a few of Johanningsmeier’s family members who, too, took a moment to add a shovel-full of dirt.

Drew called the Chinquapin Oak tree one of the “most beneficial native species” of tree, both to wildlife and the environment. It will branch out, he said, to provide plentiful shade on a hot day and will nourish ground squirrels with sweet-tasting acorns.

Like Johanningsmeier, its impact will be comforting and far-reaching.

Drug Court coordinator Joe Williams, too, thought the tree’s placement on the courthouse lawn appropriate. Johanningsmeier, he said, loved doing what he could to improve the justice system; drug court has graduated more than 60 participants successfully over the last four years.

“That’s a big part of his legacy,” Williams said. “This will be a living monument to a man who lived life to the fullest.”

Williams, too, said Johanningsmeier pushed everyone to “be better and to achieve more.”

The tree will sew “seeds of service for others,” Williams said, as well as a “hope for recovery.”

He wished for everyone who passes it now to remember Johanningsmeier.

“And I hope you are renewed in your vigor of working for a better future for our community and helping others,” he said.