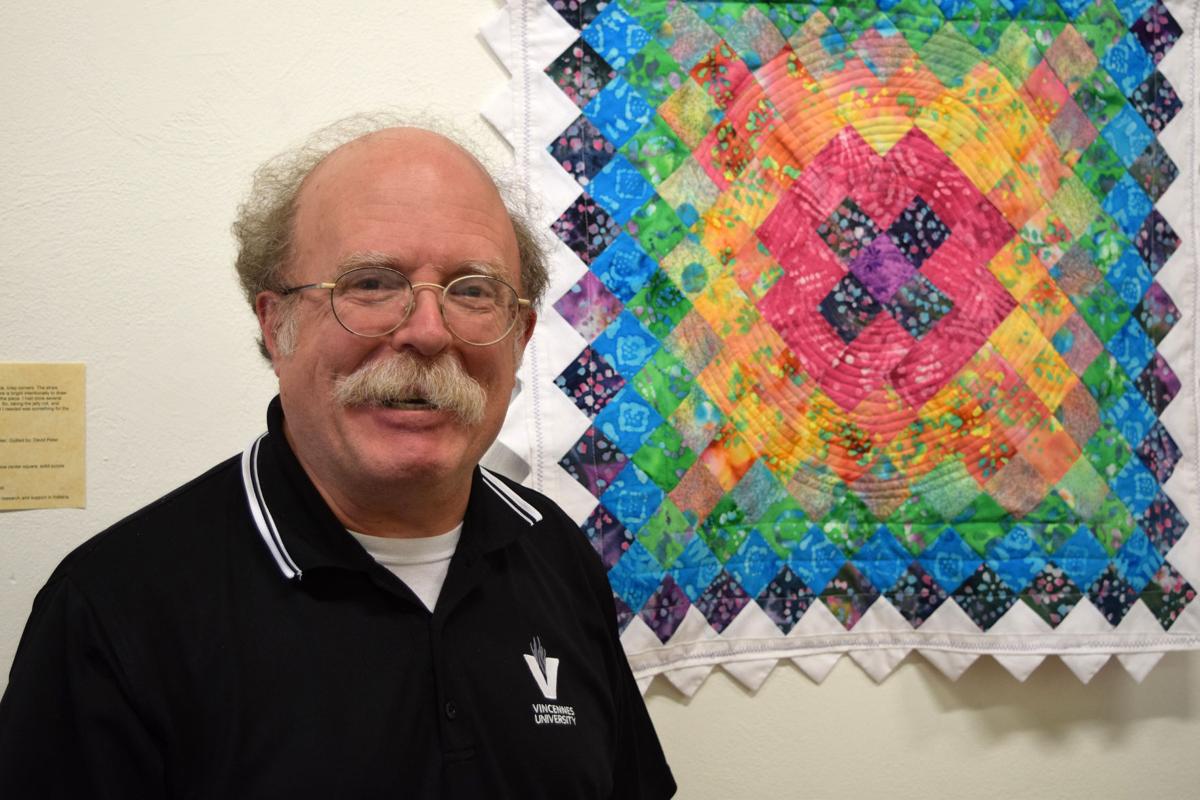 Sun-Commercial photo by Jenny McNeece | David Peter, dean of Vincennes University’s Learning Resource Center, stands next to one of his quilts, this one inspired by the vivid colors in his grandmother’s flower garden when he was a child living in Oklahoma City. Peter took up quilting three years ago after being diagnosed with early onset Parkinson’s Disease. He’s completed 30 quilts so far, and a collection of them is on display now at The Open Gallery, 329 Main St. 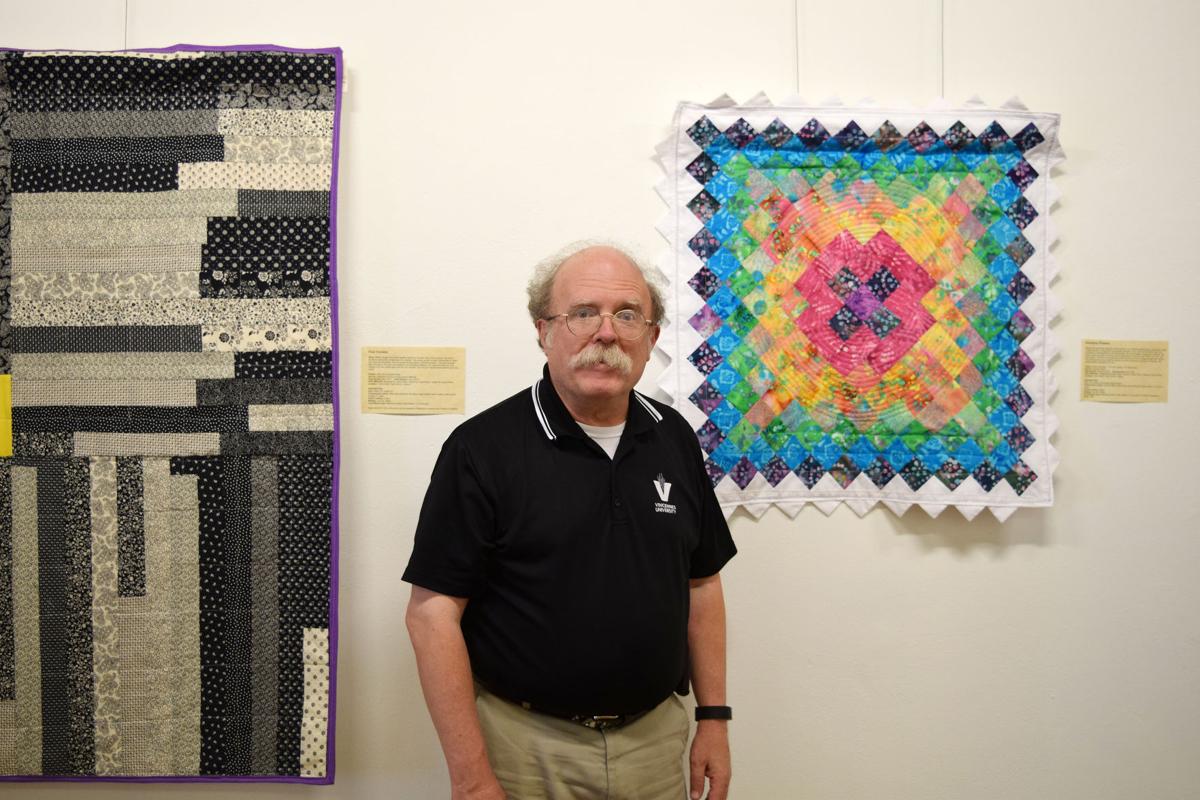 Sun-Commercial photo by Jenny McNeece | David Peter, dean of Vincennes University’s Learning Resource Center, took up quilting three years ago after being diagnosed with early onset Parkinson’s Disease. He’s completed 30 quilts so far, and a collection of them is on display now at The Open Gallery, 329 Main St.

Sun-Commercial photo by Jenny McNeece | David Peter, dean of Vincennes University’s Learning Resource Center, stands next to one of his quilts, this one inspired by the vivid colors in his grandmother’s flower garden when he was a child living in Oklahoma City. Peter took up quilting three years ago after being diagnosed with early onset Parkinson’s Disease. He’s completed 30 quilts so far, and a collection of them is on display now at The Open Gallery, 329 Main St.

Sun-Commercial photo by Jenny McNeece | David Peter, dean of Vincennes University’s Learning Resource Center, took up quilting three years ago after being diagnosed with early onset Parkinson’s Disease. He’s completed 30 quilts so far, and a collection of them is on display now at The Open Gallery, 329 Main St.

When David Peter looks at his collection of quilts, his eye doesn’t immediately go to the vivid colors or the thoughtful selection of complementary patterns.

It’s the stitching that draws his eye.

“On good days, the lines were extremely straight, every seem, every cut was right,” he said tenderly running his fingers across the pattern. “If it happened to be a bad day, those lines wobble a bit. Nothing lines up as well.

“When I look at [the quilts], I can see how things have progressed,” he said, lowering his hand to his side.

Peter, 55, dean of the Learning Resources Center at Vincennes University, had never picked up a quilting block a day in his life — at least not until he was diagnosed three years ago with early-onset Parkinson’s Disease.

A colleague during a meeting noticed a slight tremor in his hand, and after weeks of blaming it on this or that — the cold or mere fatigue — he paid a visit to his doctor.

“So you start thinking, ‘OK, what does this mean?’” Peter asked. “You know you have it. You know what happens. And you suddenly know your life is about to change.”

But unwilling to succumb to his diagnosis, Peter, a native of Oklahoma City, began a regiment of regular exercise and daily medications.

But he decided to take it one step further.

His love for making his own bowties — a fashion statement which has made him famous on campus — evolved into thoughts of taking up quilting, a craft he'd always admired as a child. So he dusted off his great-great grandmother’s old sewing machine and started researching.

“I said, ‘OK, David, how are you going to do this?’” he said with a smirk. “So I did what you do when you want to learn how to do something — I looked up some videos on YouTube.”

His first quilt was done for his father’s 80th birthday a few months after his initial diagnosis. He took his own old shirts and bandanas and crafted them into a quilt he gave to his father as a gift.

“And, as they say,” Peter said. “That’s where the story begins.”

Peter has since created 30 quilts, each more unique and beautiful than the one before. He’s tackled difficult color combinations, visually stimulating patterns and even one using a “bargello” technique that creates an optical illusion.

“See how it looks like it’s moving,” he said proudly gesturing to the quilt in its vivid colors of deep purple and lavender.

Like all quilts, each one has a story. Peter has made his for friends fighting other debilitating diseases, for local auctions and still more based on memories of his time spent in the military and his grandmother's once colorful flower garden.

And they immediately caught the attention of fellow VU instructor and artist Rebecca Mullen.

“He stopped me in the hall one day and said, 'Hey, I want to show you something.' So he pulls out his phone and shows me all these quilts. I had no idea,” she said, her eyes wide at the memory.

“The colors struck me and just the sheer volume of work in only three years. It was astonishing.”

Mullen selected several of Peter’s quilts for a month-long show at The Open Gallery, 329 Main St., a downtown venue she and her husband, Michael, also a VU instructor, own together. Peter's exhibit opened the first of July to rave reviews.

“He doesn't fit the image of a quilter,” she said with a wink in Peter's direction. “And with it being the state's bicentennial year, what better way to celebrate than with this very traditional art form?

“What he does is just extraordinary.”

And it was the first time Peter had ever shown his quilts as a part of a public exhibit.

“All this came from these 10 fingers,” he said splaying out his hands and holding them into the air. “It was humbling, exciting, really. It was rewarding and comforting at the same time.”

Doctors have told Peter that his newfound hobby is definitely slowing the onset of his symptoms. It's a way, he said, to keep his motor skills keen and his mind focused on the task at hand.

“My doctors keep encouraging me to keep doing it because it keeps things moving, keeps the brain engaged,” he said. “I'm always thinking about what's next, how I can put this or that together.

“I won't be fool-hearted and say I'll be able to do this forever,” he said, looking pensively down at his book-covered desk. “Some just stop, shut down and wait for the end, but not me. I want people to say, “Hey, a guy with Parkinson's did all this.

“'I wonder what he'll do next?'” he asked with a twinkle in his eye.

Peter's quilts will be on display during an open mic and poetry reading event set to get under way at 6 p.m. today at The Open Gallery.

ABOUT PEOPLE OF NOTE

Know someone whose story needs to be told? You can nominate a candidate by telling us why you think the person should be profiled, including a brief biographical note on the subject.

Nominations can be mailed to "People of Note," c/o The Sun-Commercial, Post Office Box 396, Vincennes, IN 47591 or they can be e-mailed to: vscnews@suncommercial.com, with "People of Note" typed into the subject line.