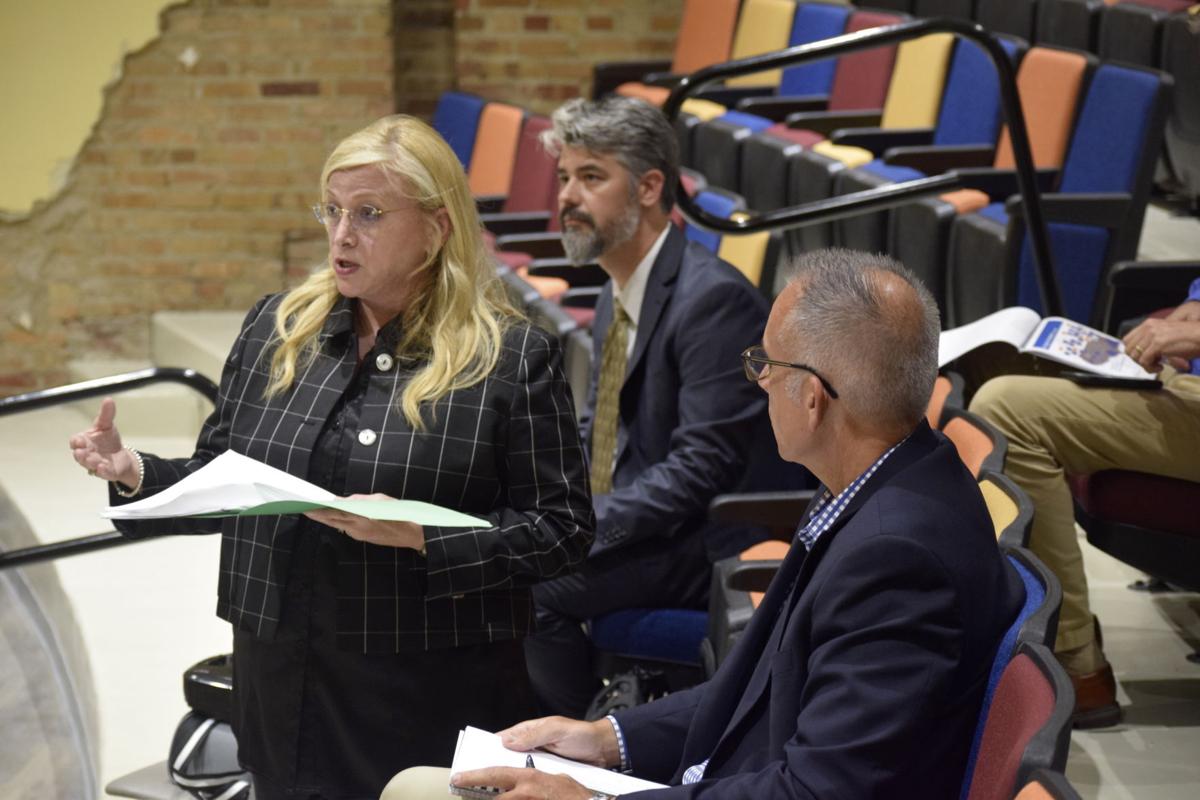 Suzanne Escudier with Origis, a Miami, Florida-based solar developer, speaks to members of the county council during a public hearing on Tuesday evening at the Pantheon, 428 Main St. 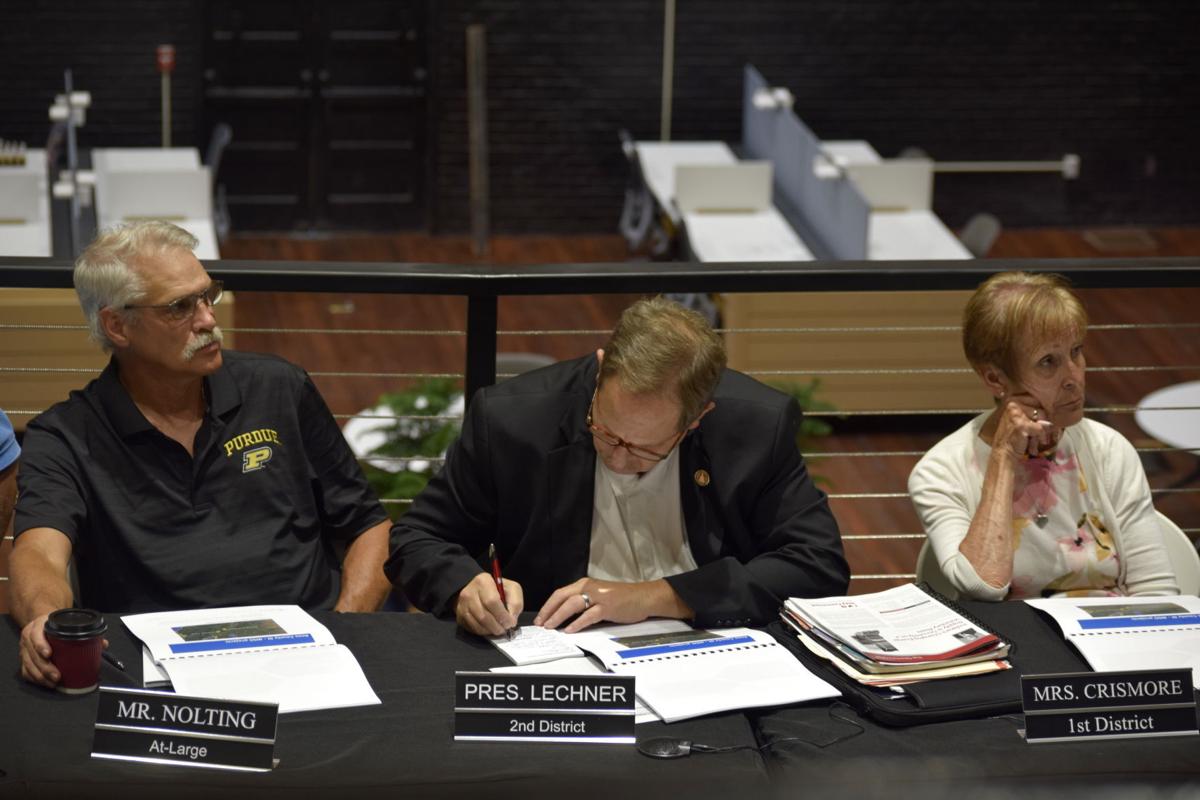 Suzanne Escudier with Origis, a Miami, Florida-based solar developer, speaks to members of the county council during a public hearing on Tuesday evening at the Pantheon, 428 Main St.

The Knox County Council on Tuesday approved a personal property tax abatement for a solar developer looking to build a 150 megawatt farm in Steen Township.

In return, the county, once again, is poised to receive $2.5 million in payments spread over six years — a deal strikingly similar to one reached this fall with Nebraska-based Tenaska for the construction of a solar farm in Harrison Township.

The county council held a rather sparsely-attended public hearing at the Pantheon, 428 Main St., during which representatives with Origis, a Miami, Florida-based solar developer, made their pitch for a $106 million solar farm to be constructed largely in Wheatland, should they secure all the necessary state and local permits.

Origis’ current plan proposes the use of about 1,200 acres of land across multiple parcels. The company began acquiring land in the Wheatland area, they told the council, back in 2019, and are concurrently looking at even more near Bruceville for yet another project, marking the county’s third such request in just over a year.

The county council’s solar committee, members indicated Tuesday, have been meeting with Origis officials in negotiating an Economic Development Agreement, the tool by which they can — and did — grant the abatement.

Just as with Tenaska, the council allowed for a ten-year personal property tax abatement, one that essentially forgives 100% of the taxes in exchange for the $2.5 million in economic development payments.

Origis officials, too, indicated it would mean an additional $12 million in tax revenue to the county over the life of the solar farm, which they expect will be at least 35 years.

Councilman Harry Nolting said negotiations had “gone well” and that he was “pleased with the progress made” so far.

“I look forward to getting this approved and in operation,” he said.

“It’s going to be a lot of landscape changes for Knox County, but I think we’ve embraced it and are looking forward to you being here,” he said.

“I hope it’s everything we have all envisioned it to be.”

Per paperwork filed with the county so far, Origis is proposing that the project, after construction, would employ up to three people permanently at salaries of an estimated $42,000 per year.

Because solar farms, once up and running, don’t result in an abundance of new jobs, tax abatements like these typically include these kinds of payments in lieu of taxes paid to counties to offset the revenue lost as a result, explained councilman David Culp.

“So we receive a stipend over a certain number of years to help with what we (didn’t get) in the way of salaries,” he said.

“We’re not just handing them the keys to the county. They’re carrying their fair share.”

With solar development on the rise in Indiana — and with developers actively looking here — the county in 2019 began the process of drafting its own solar ordinance to help guide everyone the rather complicated zoning process.

Tenaska’s RATTS 2 project was the first to be approved under those new guidelines, but it was not a process without contention.

The county’s Area Plan Commission, after months of discussion and two public meetings, approved the solar plan in March, but dozens of local residents opposed it, many of them fearing for their property values and the possibility of pollution.

A handful of those residents, upset at the APC for approving the RATTS 2 project, have now asked for a judicial review of the zoning body’s decision.

But very few from Steen Township attended the public hearing on Tuesday.

Local residents Dustin and Jessica Hess asked about the payments that will be made to the county and referenced conversations that happened months ago among council members about whether or not the money coming from Tenaska should be earmarked specifically for Harrison Township or the South Knox School Corp.

“Should some of that money be set aside for our area, our school corporation?” she asked.

Council members, however, indicated that it was too early for such conversations. The approval of the tax abatement is just one step in a long process, council president Bob Lechner pointed out.

Origis still has to secure zoning approval from the Area Plan Commission, finish securing the proper state permits and be granted access onto the grid before construction can begin.

“So there are no funds yet to be earmarked,” he said. “But we’ll take that into consideration as we move forward.”

Nolting, too, said any decisions on how to spend the money is still “years down the road anyway.”

“It depends on what needs there are, what our situation is at that time,” he said. “Nothing has been decided.”

County attorney Andrew Porter also pointed out that the abatement is only for personal property, meaning the panels themselves and necessary equipment. The land itself, most of it zoned as agricultural now, would, if approved by the APC, be rezoned and assessed, he said, “at four times as much.”

All of that money would pass through to the various taxing entities.

Chris Pfaff, president of Knox County Indiana Economic Development, was there to speak in favor of the project, saying with a “long history in energy production,” Knox County should be actively looking to welcome solar farms into the community.

“As we live through this time in history, renewable energy will become more important to our portfolio of energy production,” he said. “I believe these types of projects are worthy of our support, and I believe the companies we are working with to be good corporate citizens.”

Sorry, there are no recent results for popular images.