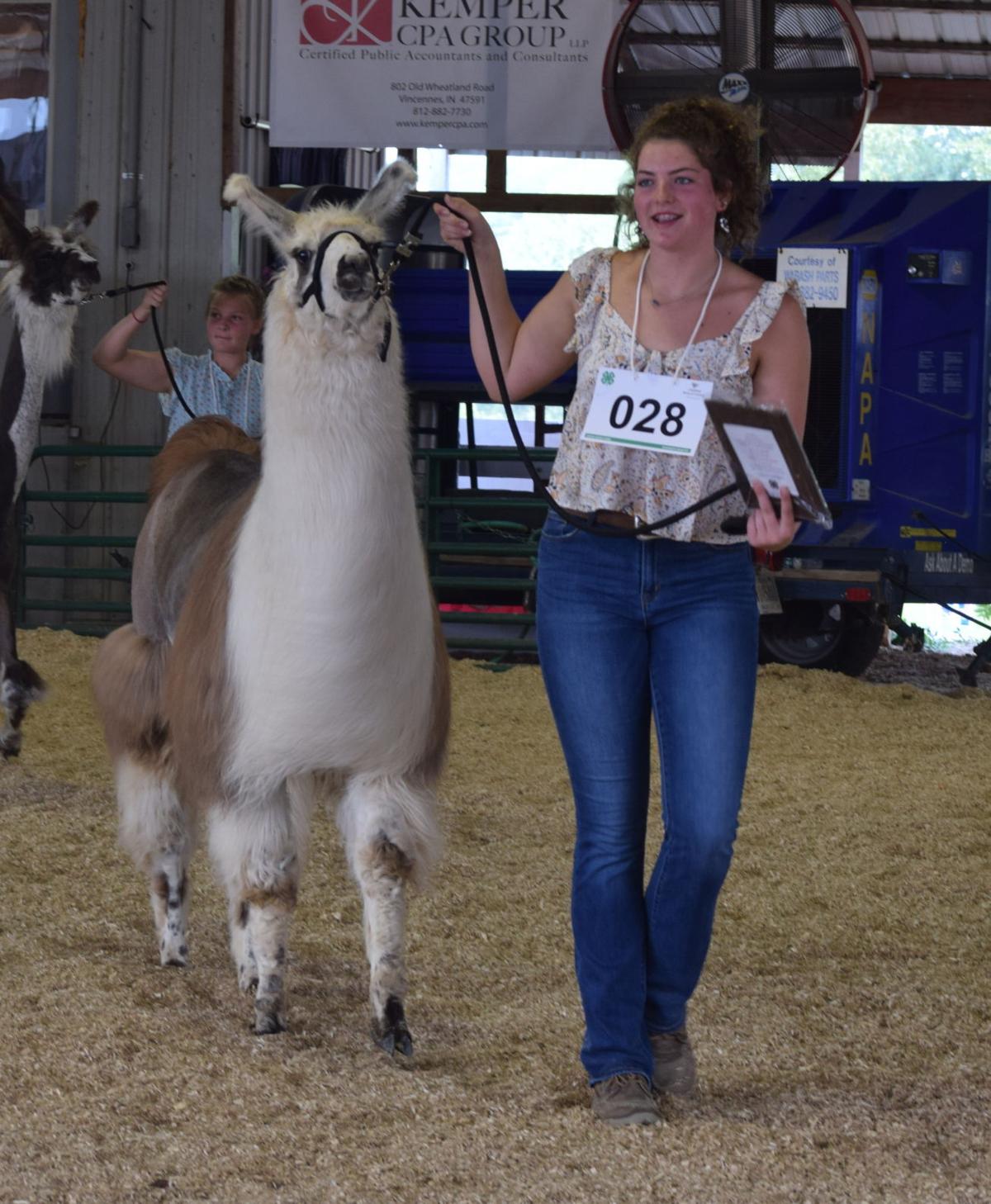 Mary Herman, 14, shows a llama during the llama and alpaca show at the Knox County Fairgrounds in Bicknell Thursday morning. This marks the fourth year since the popular pack animals were added to the livestock lineup. 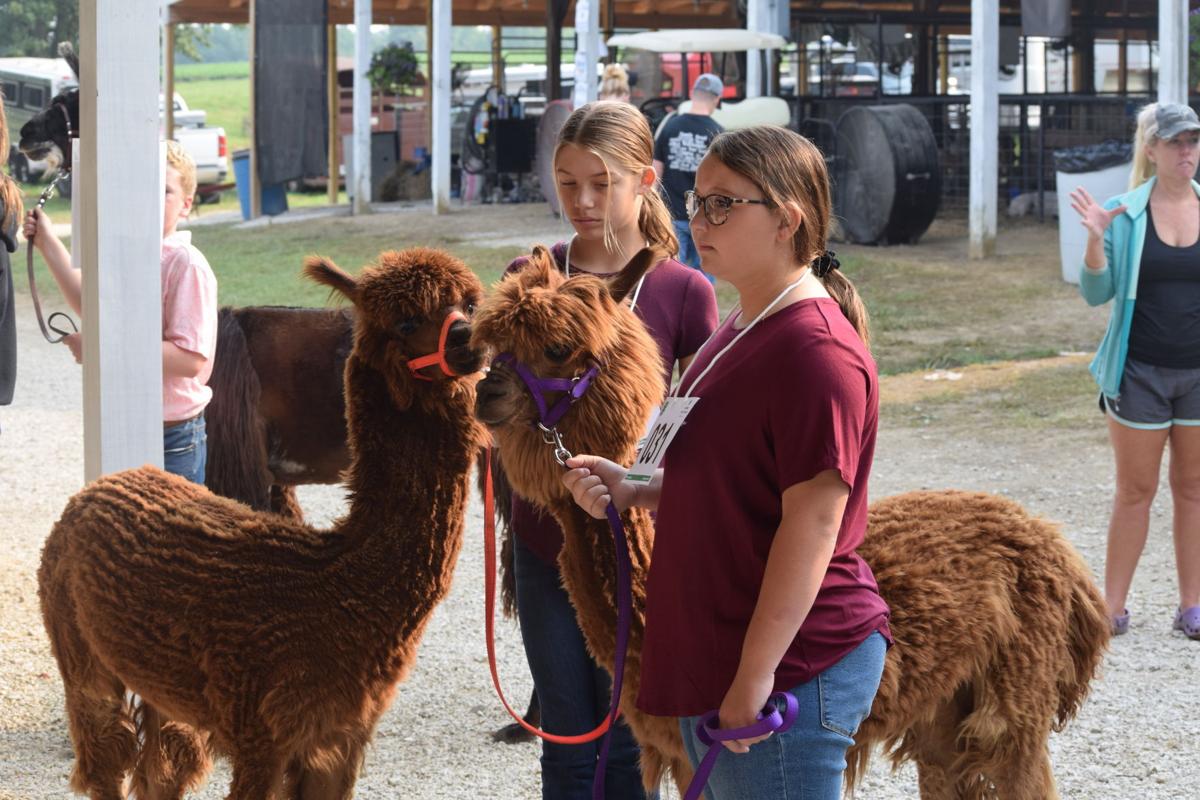 Reagan Stafford, 13, right, and Sarah French, 13, await their turn inside the livestock arena at the fairgrounds in Bicknell on Thursday morning during the llama and alpaca show. Stafford has about a dozen alpacas now, including Buster and Scooby seen here.

Mary Herman, 14, shows a llama during the llama and alpaca show at the Knox County Fairgrounds in Bicknell Thursday morning. This marks the fourth year since the popular pack animals were added to the livestock lineup.

Reagan Stafford, 13, right, and Sarah French, 13, await their turn inside the livestock arena at the fairgrounds in Bicknell on Thursday morning during the llama and alpaca show. Stafford has about a dozen alpacas now, including Buster and Scooby seen here.

It’s been four years since officials with the Knox County Fair added llamas and alpacas to their lineup of competitive livestock.

And, oh, what a fun four years it has been.

“They’re just silly,” said 15-year-old Anna Herman as a 1-year-old brown and white llama named Louella nibbled relentlessly on the front of her t-shirt. “They love to play. They love attention, but they’re feisty, too.”

Anna looked on as her sister, Mary Herman, 14, showed another of the family’s llamas; they have ten in all right now, Anna said.

Having shown cows and pigs for years, they began adding llamas to their livestock in the fall of 2019. They’ve brought a light-hearted — and laugh-worthy — addition, she said.

“They’re so cuddly, and they just want kisses and love and hugs all the time. It’s insane,” she said as Louella raised her head high, long eyelashes nearly covering her dark eyes as she surveyed the growing crowd around the livestock arena Thursday morning at the Knox County Fairgrounds in Bicknell.

“This is Buster and Scooby,” she said pointing to each one, Scooby, unsure of the unexpected attention, hiding his face behind Buster’s. “They’ll turn a year old in the fall.”

Stafford has been showing alpacas — an animal quite similar to the llama — for four years, but this was Buster and Scooby’s first trip around the show ring.

“They’re social animals,” Stafford said proudly, “but this is their first time, so they’re a little scared right now.”

She has 12 alpacas now, she said, on her family farm just outside of Vincennes. She described them as “very happy animals,” ones who show great affection toward people, especially kids.

“But if you make them mad, they will spit on you,” she said with a giggle. “They mainly only do that to other alpacas, though.”

Llamas and alpacas are pack animals — both species originated in South America — and are meant to help carry loads over mountains and along trails.

His car was found nearly a month after he went missing. His dad hired a private investigator to find his son

Watch a clip from CNN Films' "The Lost Sons"

The two animals look similar, but upon closer inspection, are actually quite different.

Llamas have long banana-shaped ears, while alpacas have smaller, straighter ears. Llamas, too, have a longer face and are often much bigger, weighing as much as 400 pounds.

They’re trusting animals, experts say, and the 4-H competition pushes youngsters to bond with the animal.

In addition to the traditional halter competition, where kids walk them around the ring, the llama and alpaca show boasts another element, one requiring the 4-Hers to lead the oft skeptical animals through a kind of obstacle course.

They must complete certain tasks, like walking over a bridge or through a ball pit, putting a towel over their heads so they can’t see and jumping over a hurdle, among other things.

Stephanie Keller’s own kids have outgrown 4-H, but she’s stayed on as the llama superintendent, meaning she’s in charge of organizing the competition and show.

She showed sheep as a kid, she said. Her daughter showed goats, but when she first saw a llama at a state fair years ago, she was hooked.

“I have ten now,” she said, a clipboard under her arm. “They’re very docile, smart, easy to handle and train. They’re so gentle, anyone can walk one. It’s nothing to see a little kid running a llama through an obstacle course.”

When the fair first added the llama and alpaca competition four years ago, there were only a handful of entries, she said. Fair organizers have since seen those numbers double, possibly triple, as the animal has gained popularity amongst locals.

Keller likened them to overgrown dogs, she said, and each one has its own unique personality.

They’re also, she said, much quieter than other livestock.

“That’s probably what I appreciate the most,” she said. “They’re so quiet.

“When I walk outside, the barn is always peaceful,” she said with a smile.