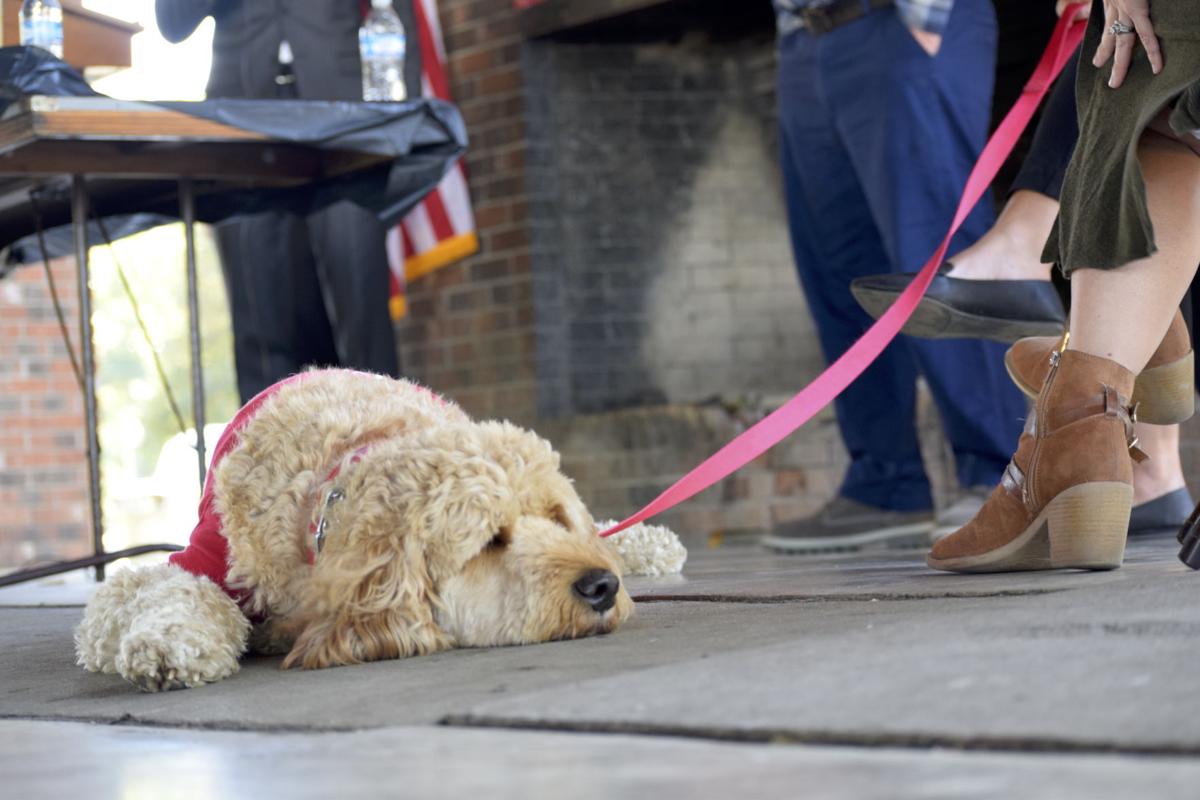 Cooper, a 4-year-old Goldendoodle who serves as a therapy dog for Knox County Drug Court, decided to snooze through most of the graduation ceremony held at Gregg Park Wednesday. Cooper sleepily presided over the graduation of 14 Drug Court participants 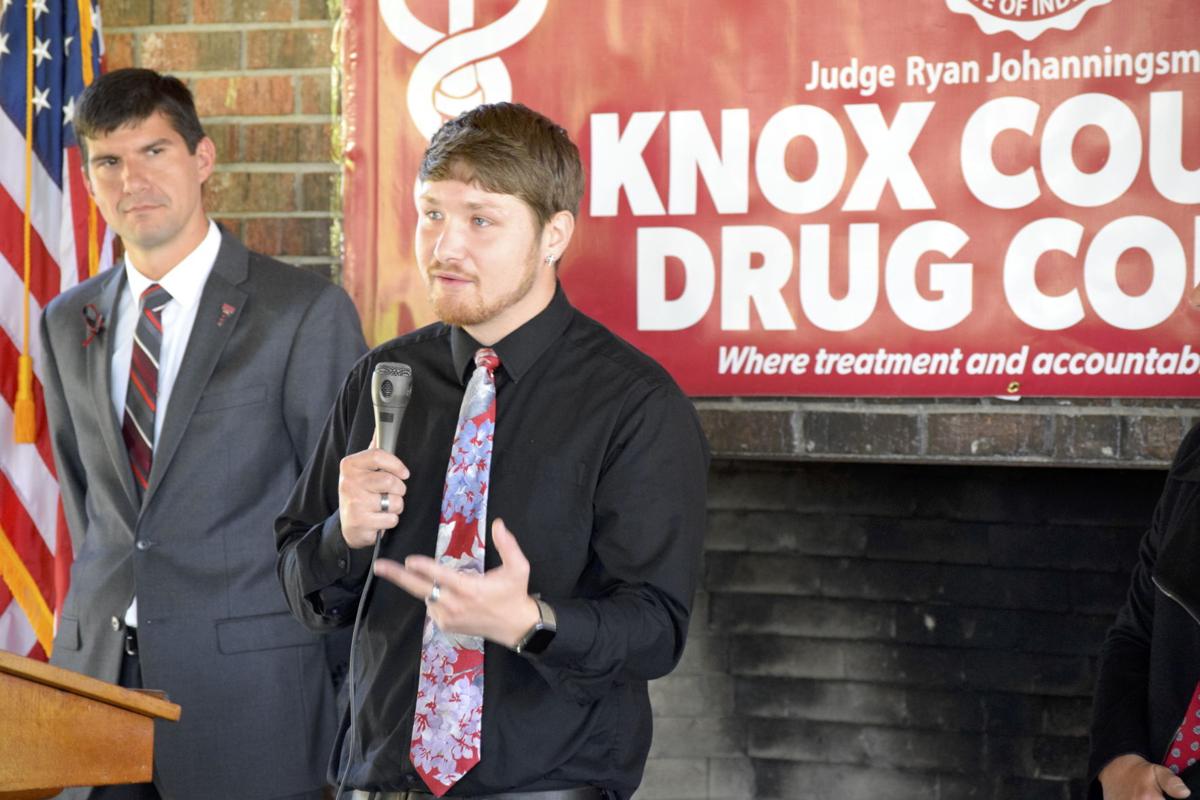 Jeremy Thorne tells of his experiences with Knox County Drug Court during a graduation ceremony held Wednesday afternoon at Gregg Park. Thorne was one of 14 participants to graduate in the first ceremony since the death of Superior Court II Judge Ryan Johanningsmeier in late August. 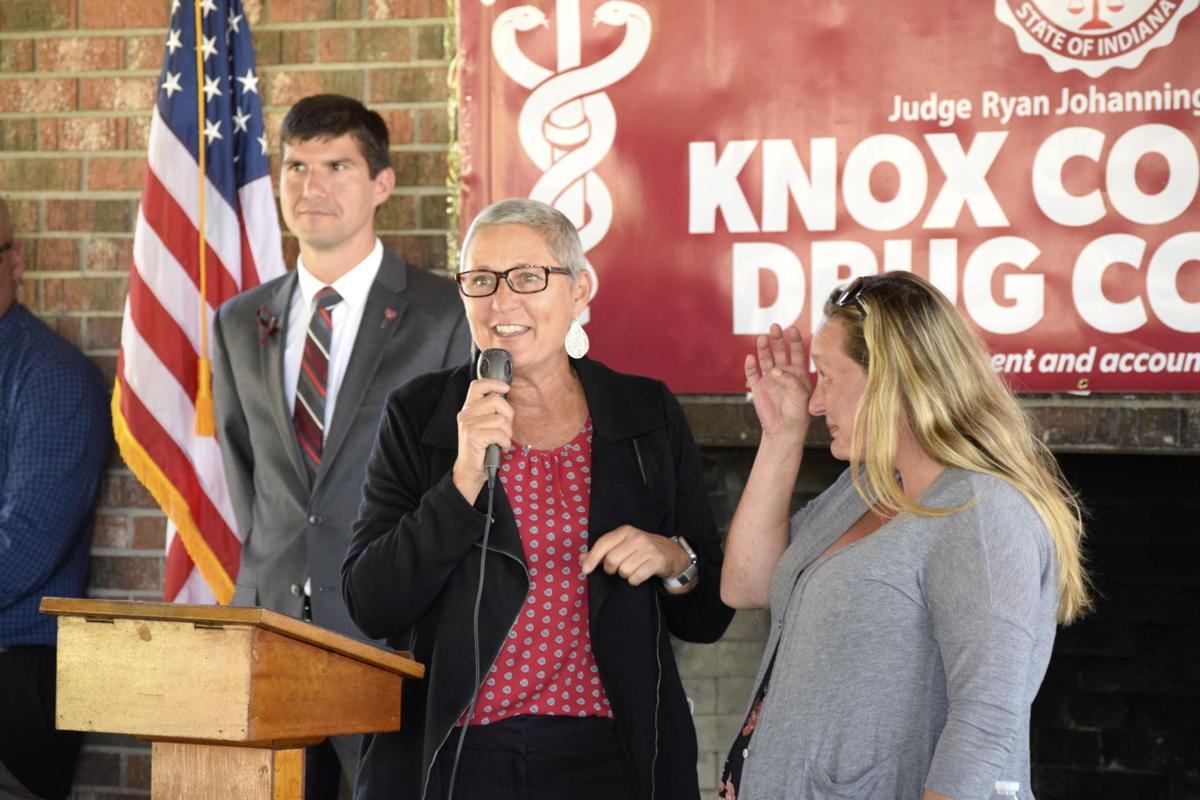 Cooper, a 4-year-old Goldendoodle who serves as a therapy dog for Knox County Drug Court, decided to snooze through most of the graduation ceremony held at Gregg Park Wednesday. Cooper sleepily presided over the graduation of 14 Drug Court participants

Jeremy Thorne tells of his experiences with Knox County Drug Court during a graduation ceremony held Wednesday afternoon at Gregg Park. Thorne was one of 14 participants to graduate in the first ceremony since the death of Superior Court II Judge Ryan Johanningsmeier in late August.

Officials with the Knox County Drug Court program in late August were dealt a devastating blow upon the untimely death of their benefactor, Superior Court II Judge Ryan Johanningsmeier.

September, program coordinator Joe Williams told a large group of graduates and their families gathered at Gregg Park Wednesday afternoon, was a time for mourning.

“But we’re going to end it on a note of happiness and celebration,” Williams announced during the graduation ceremony, the first since Johanningsmeier’s death on Aug. 29. “Because we want to ensure October begins in a spirit of celebration of recovery and the hope of more to come.

“Today we celebrate these graduates and the impact we know they will have on our community.”

While there was an inevitable sadness felt during the ceremony, Williams said they tried hard to make it about the graduates themselves, not Johanningsmeier’s painful absence.

That’s what Johanningsmeier, who was often his Drug Court participants’ biggest champion, would have wanted anyway.

“Today is for the graduates,” Williams said matter-of-factly. “We had a moment of silence for Judge Johanningsmeier, and certainly that was appropriate. Really, we could have spent all day remembering him and the impact he left, but that would have diminished the recognition of the participants.

“And he wouldn’t have wanted that.”

“We owe him so much,” Johnson told the crowd. “And his legacy will live on through Drug Court.”

And Johanningsmeier would want, he said, the graduates to be recognized “for all their hard work” over the last two years.

Collectively, the 14 graduates celebrated more than 4,000 days of sobriety, and 29 children now have active and engaged parents.

Together, their cumulative sentences with the Indiana Department of Corrections would have been 52 years, thereby costing taxpayers as much as $936,000.

Graduate Kevin Staley was the first to seize his diploma Wednesday, and he “thanked God for putting Ryan” in his life.

Before entering the program, he said he was in a “vicious cycle” of addiction and had been incarcerated 30 times.

But upon his arrest in April of 2018, he prayed for another opportunity to get it right.

“I asked God to give me one more chance,” he said. “And he did just that.”

Staley said he, like so many others, was worried about handling the responsibilities of Drug Court with jobs and daily life, but Johanningsmeier — and the network of supporters he put in place — made it all feel possible.

Dr. Sanjay Gupta warns of 'exponential growth' of Covid-19 in US

“I am two years, five months and five days clean and sober,” he announced proudly, to which the shelter house erupted in whoops and applause.

He vowed to embrace life with “integrity” and “to do the next right thing even when no one is watching.”

And for that, he knew Johanningsmeier would be proud.

“I know he’s up there right now looking down on us with that big smile,” he said.

“If it wasn’t for him, I wouldn’t be up here wearing a tie right now,” he said, to which the crowd laughed. “He did a lot for me. He gave me a chance when no one else would.”

Case managers Ann Bobbitt and McKenna Dillon were on hand to celebrate alongside their graduates.

“And now look at you!” she exclaimed, to which Thorne beamed.

Looking healthy and happy, Thorne said he used to live in the very shelter house where they were gathered on Wednesday.

“And I probably did weigh 100 pounds because I only ate once a week,” he said.

But now he’s mended relationships, found a job, has completed a sober living program and entered yet another.

Drug Court, Thorne said, “gave me my life back.”

Williams said watching these participants find success over the last few years has been a joy.

“We’re the luckiest people to be able to work with them and see what they do with this opportunity,” Williams said, adding that sometimes all it takes is showing someone the right path and helping them to say on it long enough to adapt.

“It’s not the easy path, but it is the right path,” Williams said, “and these people have chosen it.”