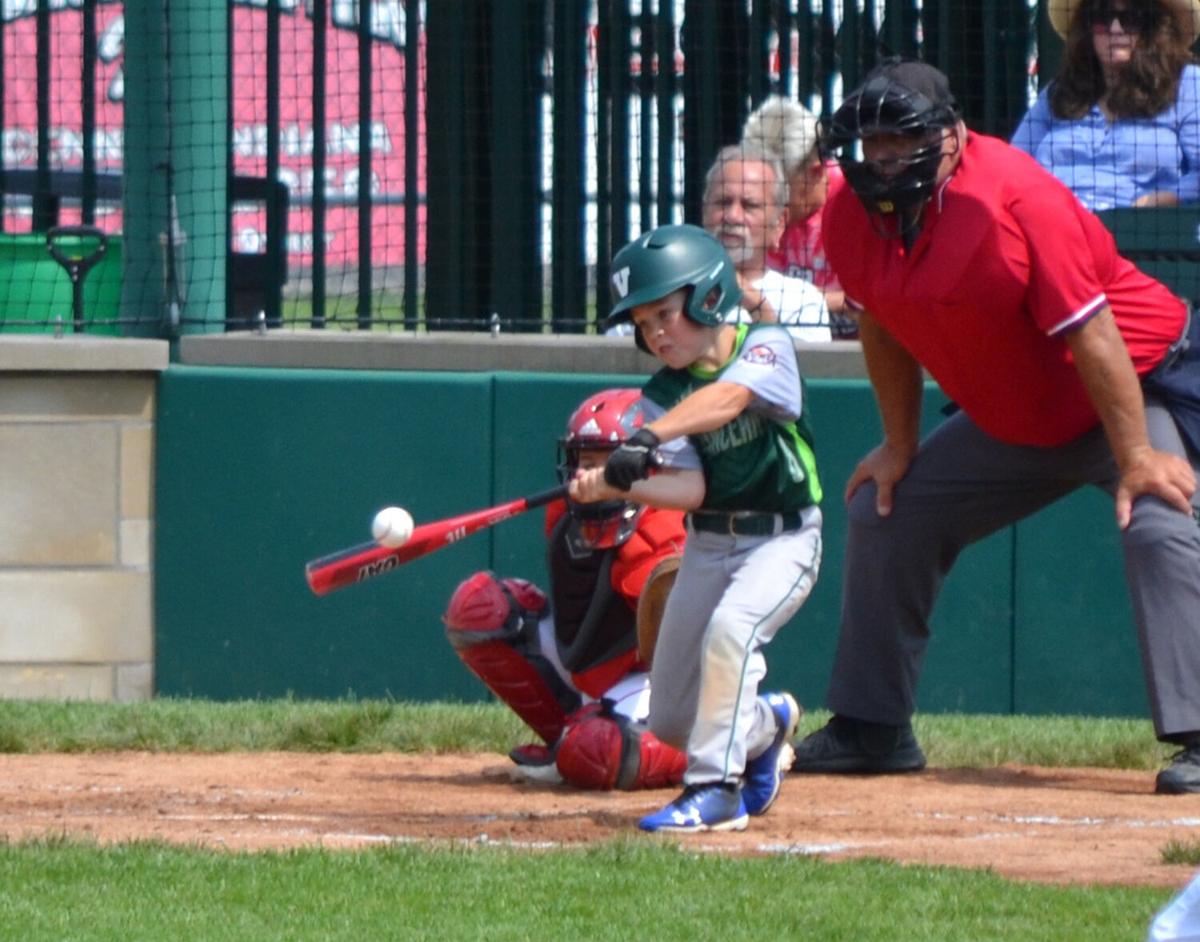 Bennett Davis of the Vincennes Cub League 10U All-Stars loops a base hit into left field Saturday in the opening game of the Cal Ripken State tournament at Joe Bilskie Field. The Vincennes 10U team went 3-1 in the tournament and advanced to the Ohio Valley Regional with a runner-up finish. 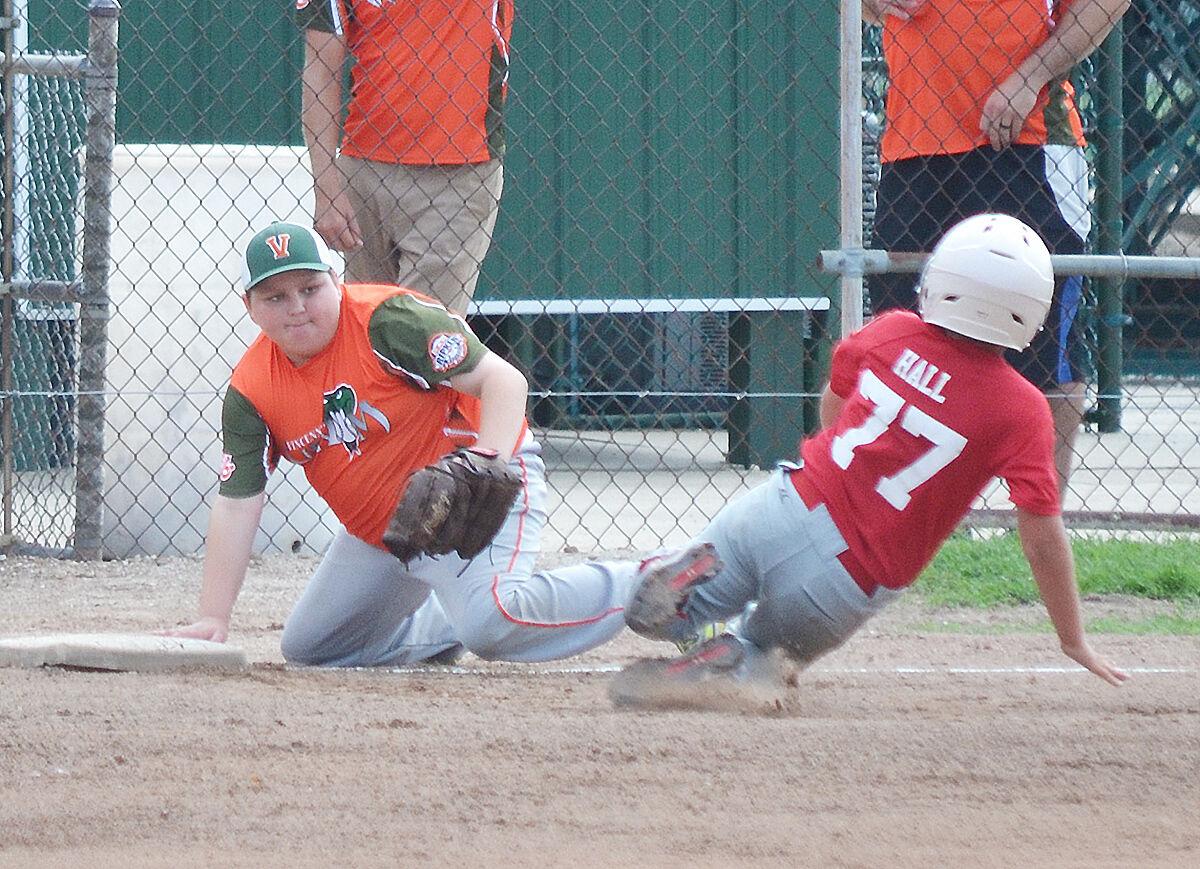 Vincennes Venom third baseman Memphis McCrary moves to tag out a Crown Point Red base runner during their first game in the Cal Ripken 10U State tournament at Matt Minderman Field Saturday. The Venom dropped both of their pool games.

Bennett Davis of the Vincennes Cub League 10U All-Stars loops a base hit into left field Saturday in the opening game of the Cal Ripken State tournament at Joe Bilskie Field. The Vincennes 10U team went 3-1 in the tournament and advanced to the Ohio Valley Regional with a runner-up finish.

Vincennes Venom third baseman Memphis McCrary moves to tag out a Crown Point Red base runner during their first game in the Cal Ripken 10U State tournament at Matt Minderman Field Saturday. The Venom dropped both of their pool games.

The Vincennes Cub League 10U All-Stars won their first three games as host of the Cal Ripken State tournament this weekend to earn a spot in Sunday's championship game. But Vincennes failed to find its offense in the final, settling for a runner-up finish with a 5-0 defeat to South Bend Eastside.

As one of the top four finishers, the Vincennes All-Stars advance to the Ohio Valley Regional in Lexington, with pool games beginning Thursday. The Vincennes Venom also competed in the 10U State tournament here this weekend, but they dropped both of their pool games.

It was a whirlwind weekend at the Cub League. Schedules had to be adjusted Friday evening after those games were rained out. Two teams didn't show up Saturday, knocking the field down to six teams and further complicating the schedule. The hard-working grounds crew had Joe Bilskie Field in good shape, but Earl Lawson Field, the blue diamond, was deemed unplayable due to the wet field conditions, making Matt Minderman Field, the red diamond, the alternate site.

Despite those setbacks, and a pair of rain delays during Sunday's championship, the tournament was still concluded on time.

Vincennes was limited to just three hits in the final against South Bend Eastside, all singles by Reid Kelso, Jaxson Wirth, and Cooper Neal, and only advanced one runner to third base.

Though a disappointing finish, the Vincennes All-Stars had already punched their ticket to the Ohio Valley by winning both of their games Saturday. The other two joining Vincennes and South Bend Eastside this weekend at the regional are Bunker Hill (Peru) and Crown Point Red.

Vincennes clipped Crown Point White, 5-1, in the tournament opener Saturday morning. After getting down 1-0, Neal doubled home Jaxson Newton, who also doubled, and Caroline Yenne singled home Neal for a 2-1 lead in the second inning. Vincennes loaded the bases in the fourth, and Reid Kelso came through with the clutch two-out hit to bump the margin to 4-1. They added another in the sixth. Braylen Sanders chipped in a hit, and Newton and Caleb Alford each pitched three innings.

Jim Polzin: Joe Barry isn't worried after his rotten debut as Packers defensive coordinator, but should we be?

Vincennes then took down Bunker Hill, 6-2, highlighted by a four-run third inning. Diesel Rogers started it with a one-out single, and Cole Worland tripled him home. Newton followed with a double to score Worland, and after Justin Herron dropped down a bunt single, Neal grounded out to score Newton, and Yenne singled home Herron. Newton and Rogers each had two hits in the victory. Rogers pitched 3 1/3 innings of relief with four strikeouts, sandwiched between 1 2/3 innings from Worland and one inning from Neal.

On Sunday, Vincennes took down Crown Point Red, 4-2, in the semifinals. Yenne and Bennett Davis each scored two runs, both crossing home in the second and fourth innings. Sanders and Kelso supplied the RBI hits in the second, and in the fourth, Yenne scored on a fielder's choice by Sanders, and Davis scored on an error. Wirth hurled four innings for the win, and Newton tossed two to close it out.

The Vincennes Venom didn't find the same success this weekend, falling to Crown Point Red, 12-1, in the opener, and South Bend Eastside, 14-3.

The first game was much closer than the final indicates, as the Venom and Crown Point were tied, 1-1, through four innings. Both teams plated those runs in the first, with the Venom tallying on some heads-up base running from Levi Klingler, who reached on a fielder's choice and came around to score on some ill-advised throws. Crown Point seized control with three runs in the fifth inning and tallied eight in the sixth to put it out of reach. Calvin Doggett and Raymond Sommerville had hits, and Doggett, Memphis McCrary, Hayden Lanning, and Trevor Smith combined on the pitching.

The eventual champs from South Bend jumped on the Venom early in their second pool game. The Venom scored a run in the first, but South Bend Eastside responded with eight in the home half. A six-run third was more than enough to end it in four inning on the 10-run rule, though the Venom plated two in the fourth. Zeke Cooper singled with an RBI, and Klingler, Smith and Lanning scored the runs. Pitchers were Wesley Eaton, Doggett, Austin Laue and Lanning.

The Venom concluded their season, while the Vincennes All-Stars open Ohio Valley play at 10 a.m. Thursday against Pikeville, Ky. Meanwhile, the Cub League prepares to host the 8U and 9U Cal Ripken Ohio Valley Regionals this weekend.