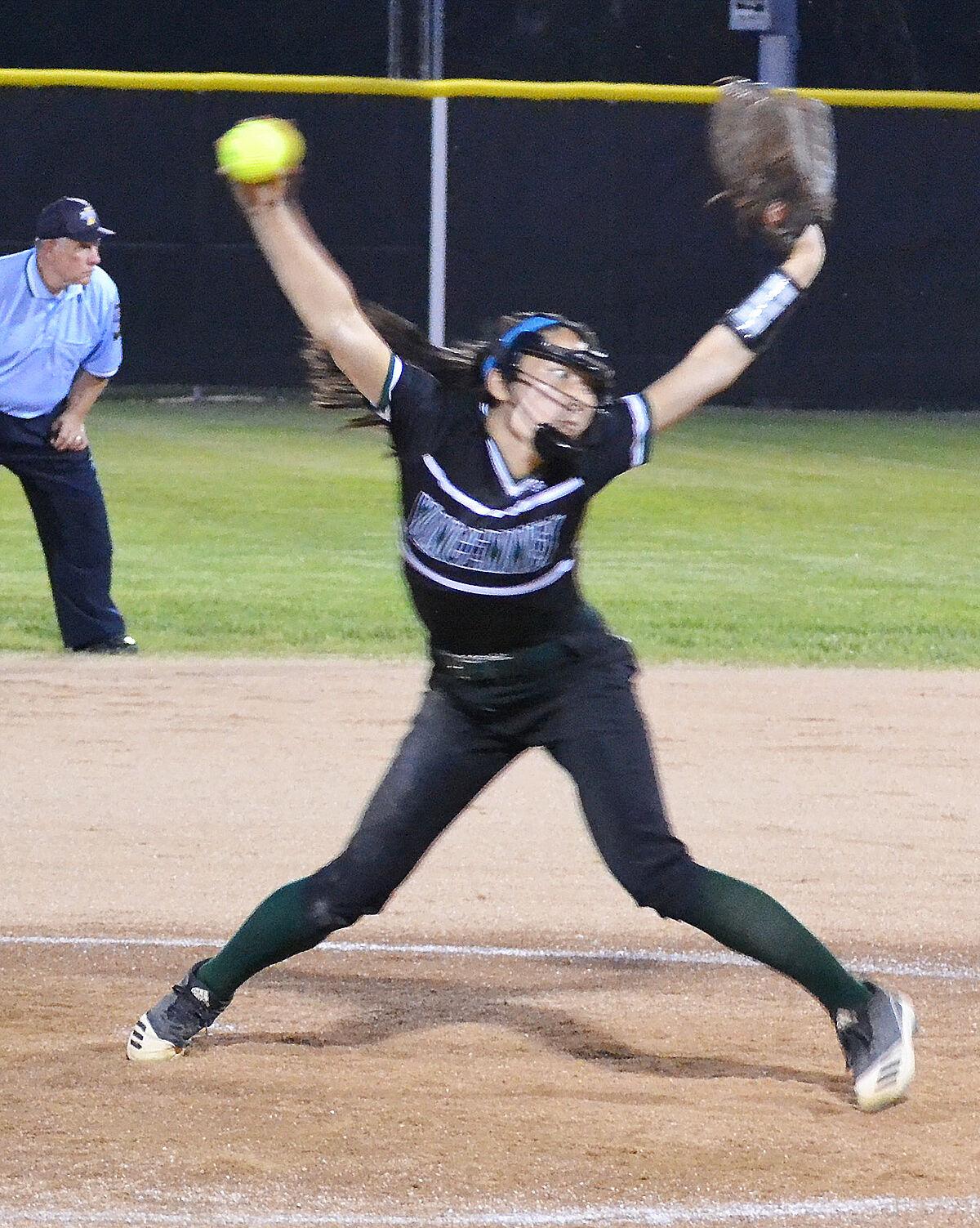 Lincoln's Delaney Anthis winds up to make a pitch Tuesday against Pike Central in the Class 3A Washington Sectional. 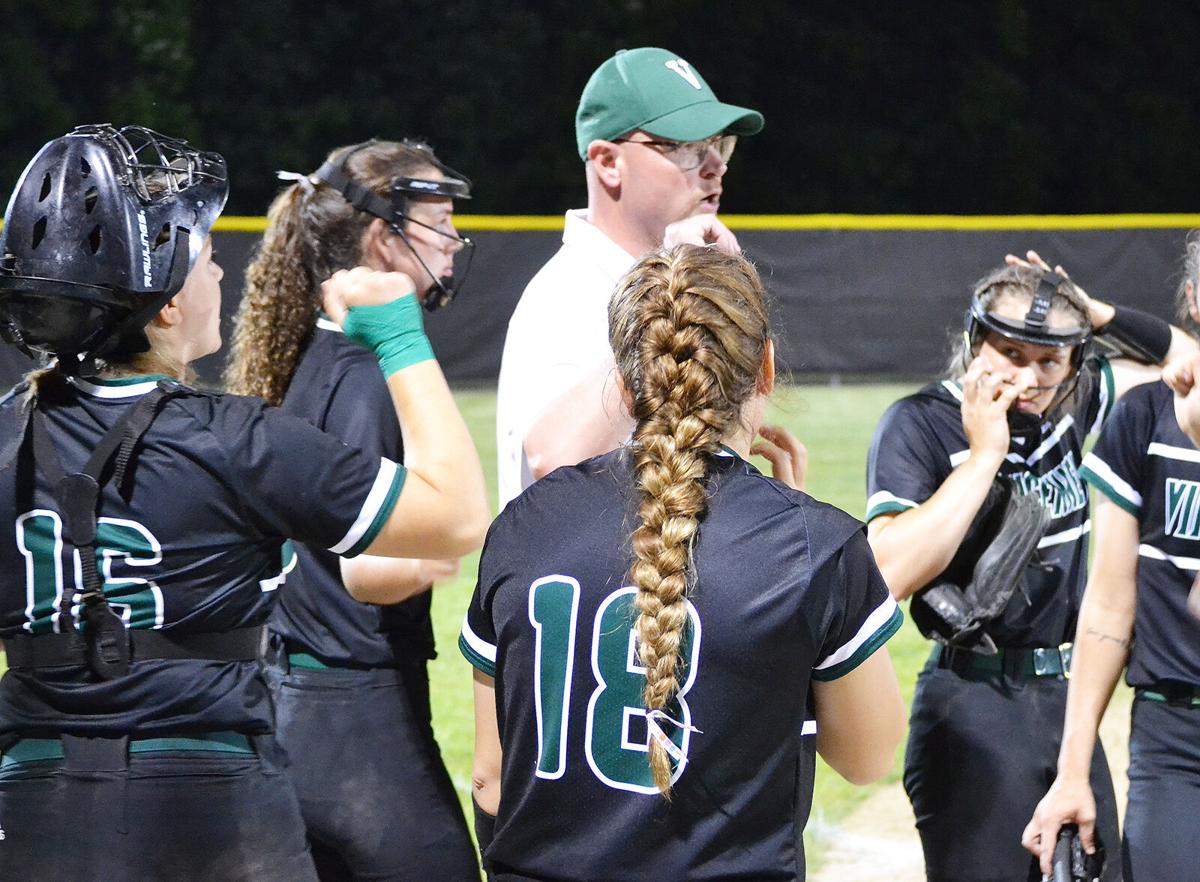 Lincoln coach Chaz Hendrix gives his team a pep talk between innings during their 7-0 loss to Pike Central in the Class 3A Washington Sectional semifinals Tuesday.

Lincoln's Delaney Anthis winds up to make a pitch Tuesday against Pike Central in the Class 3A Washington Sectional.

Lincoln coach Chaz Hendrix gives his team a pep talk between innings during their 7-0 loss to Pike Central in the Class 3A Washington Sectional semifinals Tuesday.

WASHINGTON — Whether it was small ball or extra-base hits, Pike Central seemed to score whichever way it tried against Lincoln on Tuesday. The Alices didn't have nearly as much luck, despite putting at least one runner on in all but two innings.

Chloe Williams did the brunt of the work for the Chargers, hurling a shutout with 12 strikeouts and roping a two-run homer and a double to knock out Lincoln, 7-0, in the Class 3A Washington Sectional semifinals.

Pike Central advanced to take on Washington in Wednesday's championship. The Hatchets held off a seventh-inning rally from Princeton for a 7-6 win in Tuesday's first game.

The Chargers out-hit Lincoln, 13-6, but four of those hits were bunt singles, some of which were misplayed by the Alices (6-20). Pike Central plated two runs with sacrifice flies and also had a pair of sacrifice bunts in addition to its bunt hits.

But the biggest blow was Williams' towering two-run blast with two outs in the first inning that gave the Chargers a 3-0 lead. Her double off the right-centerfield wall sparked Pike Central's two-run third inning that made it 5-0.

“They jumped out on us. We made a couple of defensive miscues to start, and they got that early run. When you make those kinds of mistakes against good teams, they make you pay for it,” Lincoln coach Chaz Hendrix said.

“We just didn't execute early. We left a lot of runners on base (seven). Six or seven hits is a lot against a good pitcher like (Williams). We knew our girls could do it. We scored five (runs) off her the first game. We had a lot of good swings, but we just couldn't put a run on the board.”

Lincoln's best chances were in the middle innings. Dani Kroeger led off the fourth with a single, and after a strikeout and fly out, Delaney Anthis blooped a hit into right that moved Kroeger to third. But Williams struck out pinch-hitter Johna Bottoms to end the threat.

After Lincoln center fielder Kali Haynes made a diving snag and doubled off a runner at second to turn back a Chargers' fifth-inning scoring attempt, Mackenzie Newland led off the home half with a single. Again, a strikeout and fly out followed, and again, Chloe Cardinal smacked a two-out single to give Kroeger a chance. The junior made good contact but flew out to right field.

“We had that first-and-third situation in the fourth, and had two runners again in the fifth. If we put one on the board there, maybe it could have been a different game, putting a little more pressure on them,” Hendrix said.

The Chargers used a couple of sacrifices to plate one in the seventh, and an Alyna Sharp double, followed by a passed ball and sacrifice fly stretched the lead to seven in the seventh.

Schweizer headlines past and present Tigers at track and field trials

Life in the Red: The good, bad and potentially ugly ramifications of likely NIL changes, presented by Scott Frost

Anthis pitched a complete game for Lincoln. She struck out two and walked five.

“She wore down a little bit (in the seventh), but it was a humid night, and she probably threw well over 100 pitches, so that's tough,” Hendrix said. "She's a sophomore, but she's really only a freshman experience-wise. If anyone was hurt by not playing last year, it was her. Going from eighth grade to a sophomore on varsity is tough to do. But she's only going to get better.”

Kroeger finished 2-for-3, and Tatum Rich also singled for Lincoln.

It was the final game for seniors Haynes, Kyndall Myers, Rich and Newland.

“It's a special group. They're a happy-go-lucky group, and the have a good time. But when it's time to focus, they're able to get things done,” Hendrix said. “That whole group, losing last year, that's losing a lot of varsity reps. Newland and Myers didn't have a lot of varsity experience, so they stepped into roles they hadn't been asked to play before.”

It was also the final game coaching the Alices for Hendrix. The coach was recently hired to teach next year at South Knox. In nine seasons with the Alices, Hendrix guided them to their only Big Eight Conference title and the second sectional championship in school history.

“It was a lot of wins, and a lot of losses. There have been a lot of quality kids I've been able to coach and get to know, and I still talk to a lot of them,” Hendrix said. “I have so many people to thank, and I'm grateful the school took a chance on me. You're never quite ready for your first varsity coaching experience. I've learned and grown a lot.

“It's bittersweet. I'm moving to where my family goes, where my wife teaches, but I'm leaving a program. As a coach, you always hope to leave a program better than when you found it, and I like to think I've done that. We made improvements to the facilities, and there's a talented eighth-grade group coming up. Interest is growing at the younger levels.”