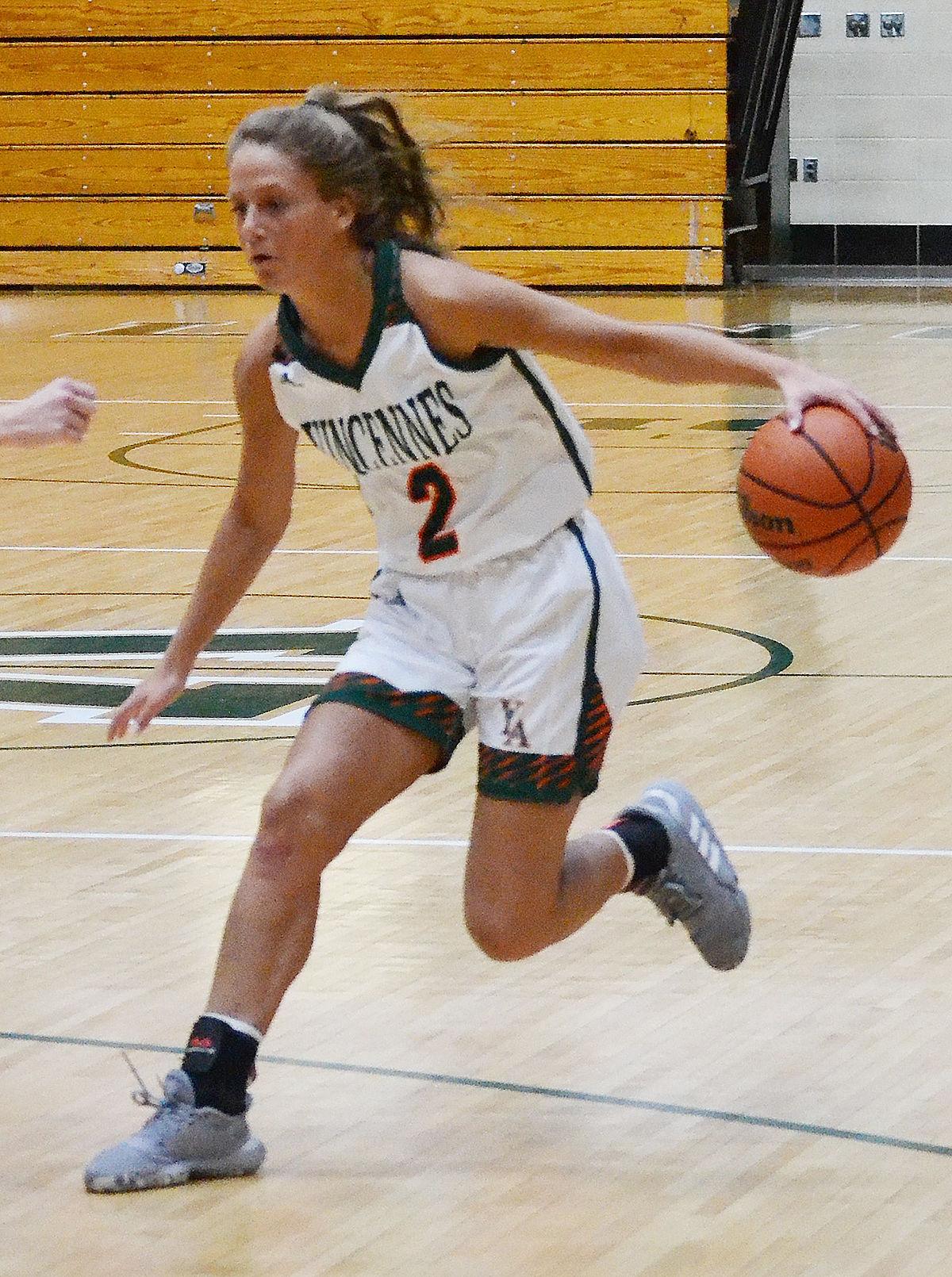 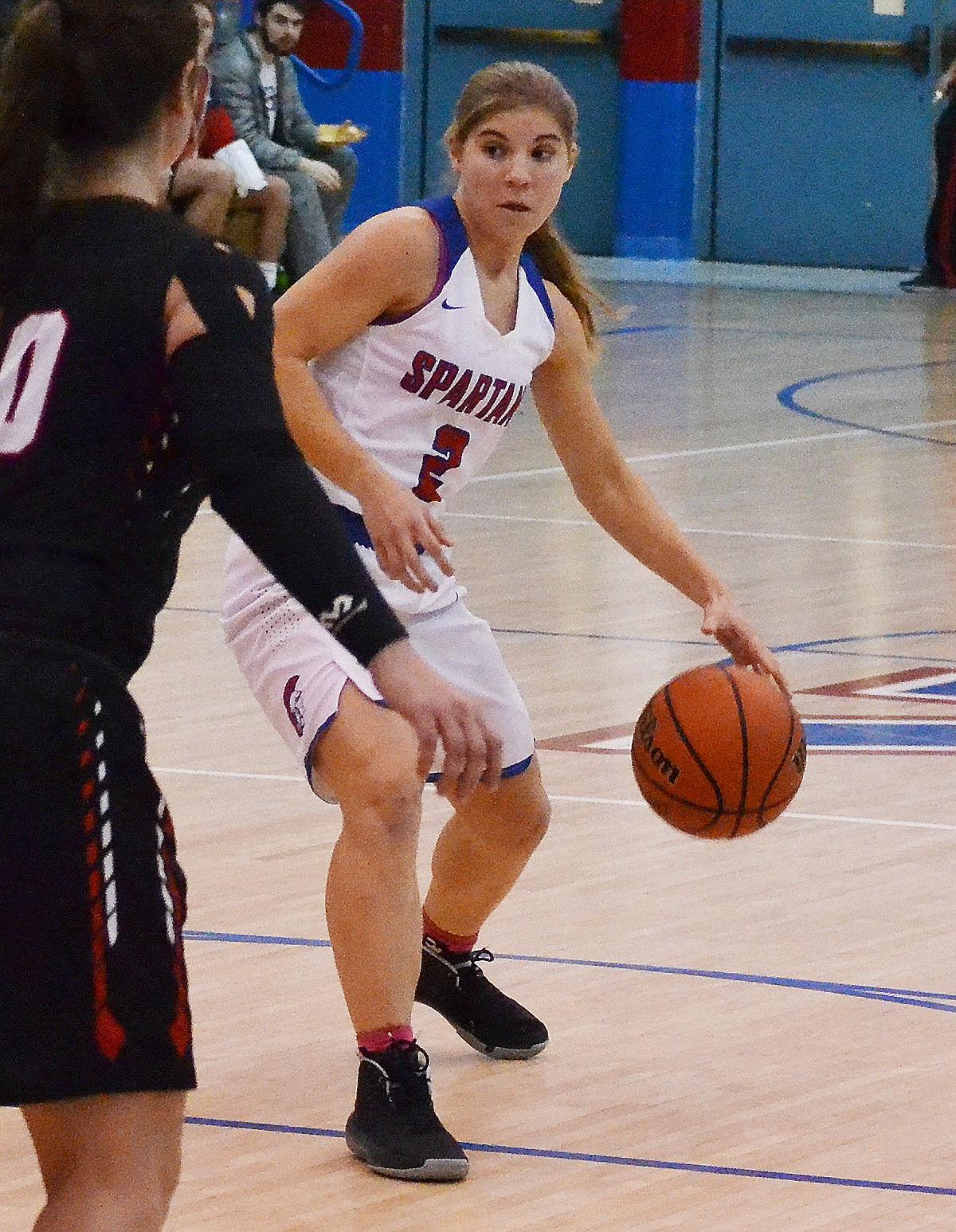 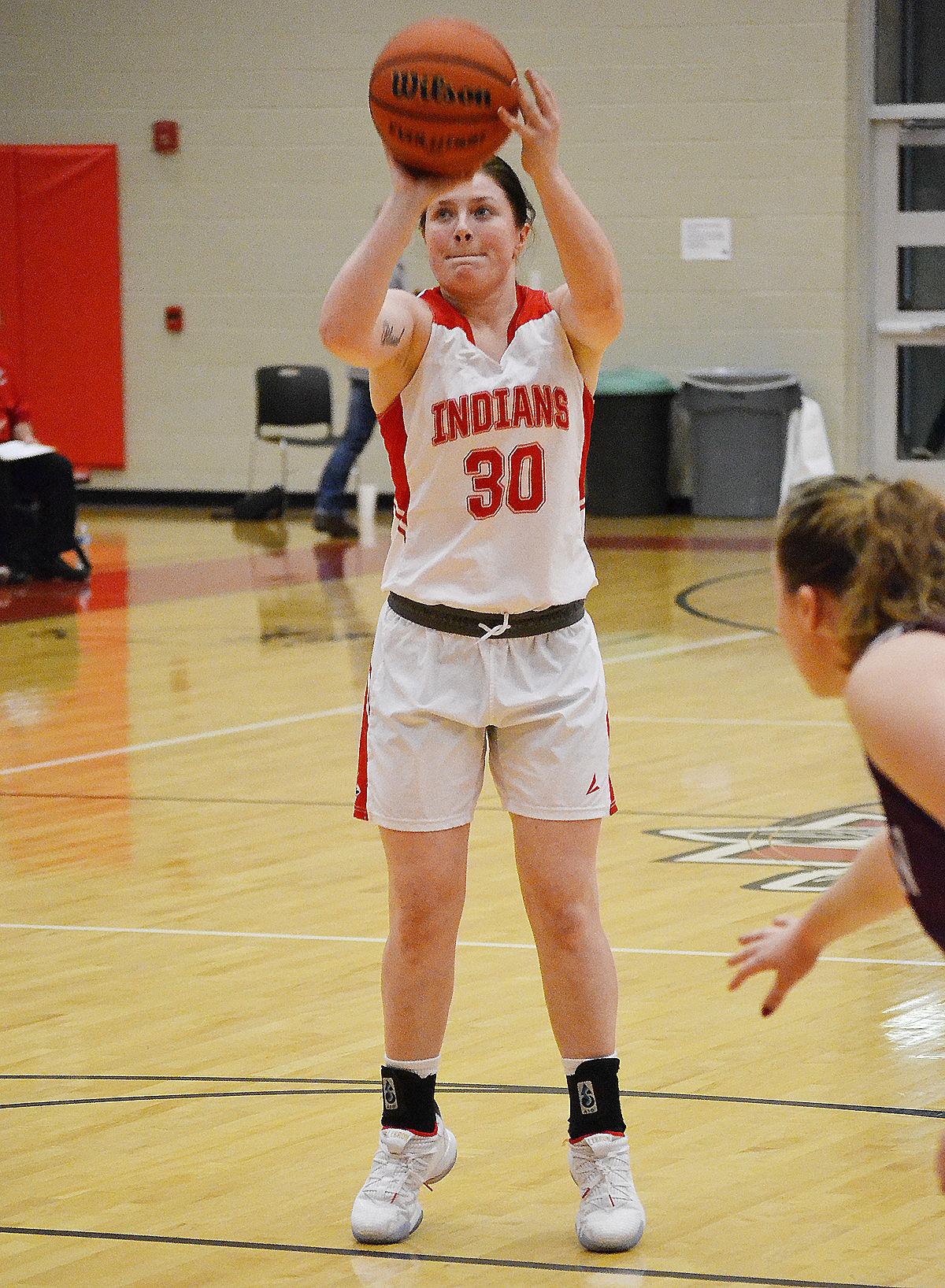 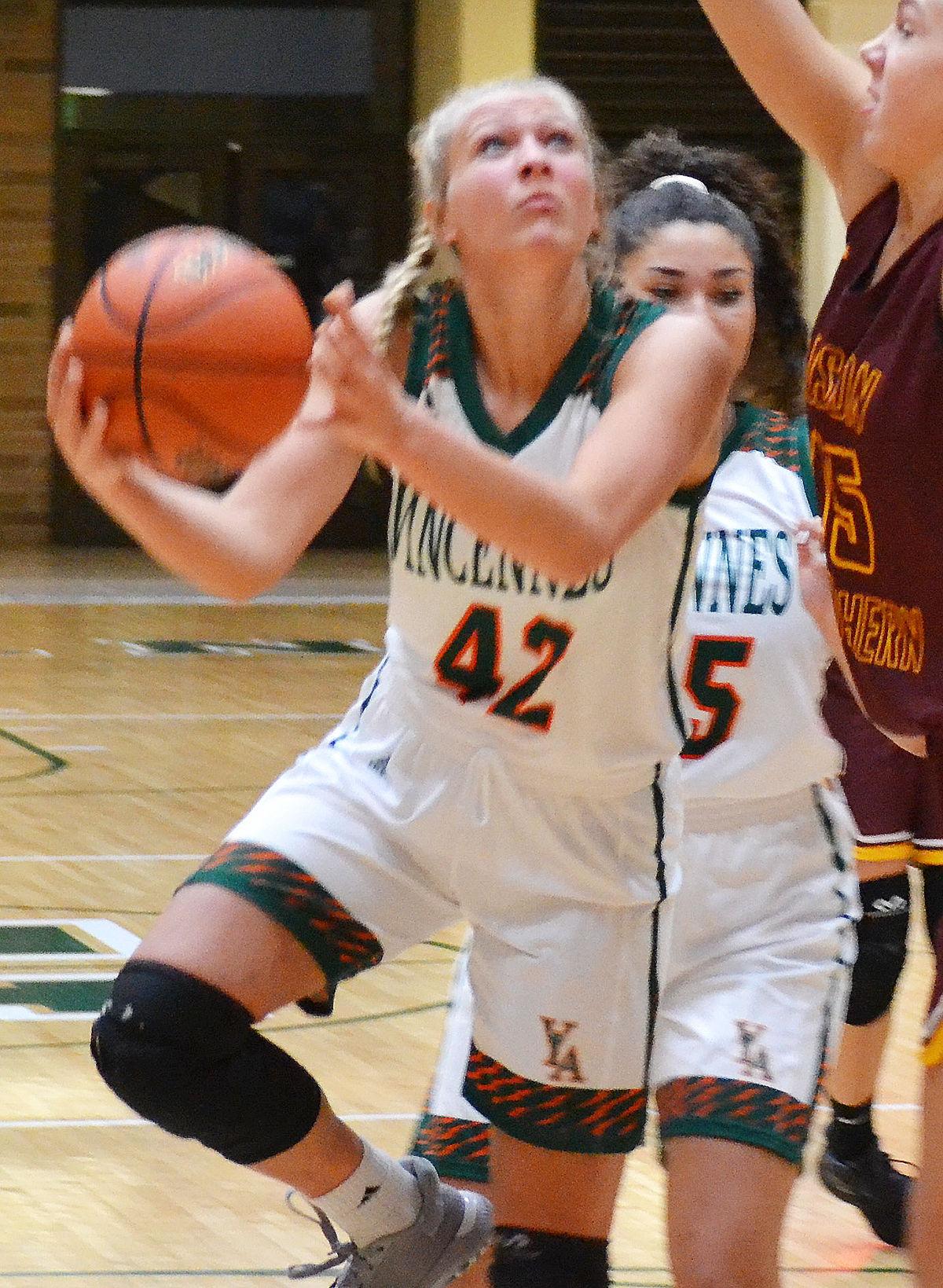 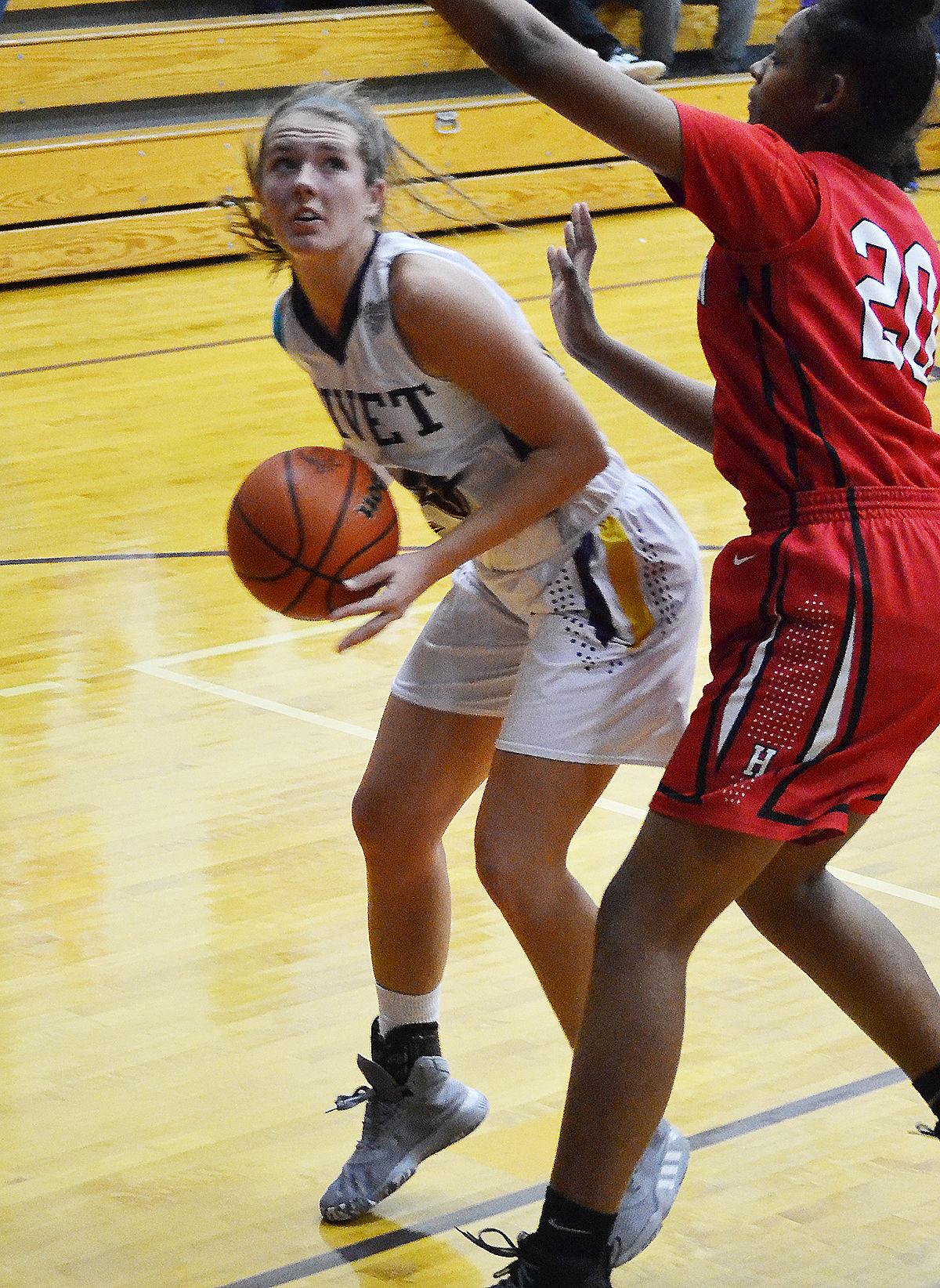 There are many ways to describe Darrian Carmean's skill on the basketball court.

One opposing coach compared the Lincoln senior to Reggie Miller with the way she came off screens and buried 3-pointers. Another rival coach called her the top all-around guard in southern Indiana and, “one of those kids that you love to watch, but hate to coach against.”

“She's a gamer and a winner. That kid refuses to lose, and she'll do anything in her power to help the team,” Connor said.

What Carmean most visibly did to help her team was score. She improved her scoring average from 15.4 as a junior to an area-best 21.4 this season, and she scored in a variety of ways. Carmean had the most 3-point makes (69) and free throws (130) in the area, shooting 44 percent from the arc and also an area-best 86 percent from the free-throw stripe. She made at least 10 free throws five times, including a 14-of-16 effort against Boonville, and she set a school-record with nine 3-pointers against Evansville Bosse while adding three more games of six made 3-pointers.

With all the scoring, her assists dropped from a year ago, but she still dished an area-leading 3.9 per game. She added 3.1 rebounds and 1.5 steals.

Today Carmean is named the Sun-Commercial Player of the Year.

“She's been our catalyst the past three seasons. She's a point guard who looked to facilitate, but she could also score for us in bunches,” Connor said. “I've had very few players where I had confidence in them running the ship. I didn't call out much (offensively). I trusted her to run our offense and facilitate. She just had pure touch from the perimeter, and it's hard to describe the way she can get to the rim, break people down and finish at different angles.

“We had a conversation over the summer, and I told her she needed to look to score more. We had a two-headed monster down low last season, but with only one back (Maycee Lange), that's a little easier for teams to take away. (Scoring more) was also just a part of her natural progression too. She wanted to win, and a lot of times, for us to be successful she needed to score.”

Carmean was an integral part to Lincoln's success all four of her seasons. The Alices went 84-21 (.800 winning percentage) with three sectional titles and three Big Eight Conference championships. Lincoln was 20-3 in the conference, and she gave coaches and fans an early sign of things to come as a freshman when she hit a half-court shot at the buzzer to lift the Alices past Boonville.

Connor also praised Carmean for her leadership and ability to always challenge her teammates to be better. Her dedication is best exemplified in the fact that she never missed a practice in four years.

Carmean's the most recent in a line of strong Lincoln point guards, which includes 2016 graduate Jene'e Goodwin and 2018 grad Abi Haynes. Goodwin was a score-first guard while Haynes mainly looked to distribute. Though Carmean didn't play with Goodwin, Connor said both players had an impact in the development of Carmean, who ended up being a pretty potent combination of both players.

“There were a lot of times when Jene'e and Abi practiced together in guard drills, and I think Jene'e's work ethic rubbed off on Abi and probably helped her take her game to a new level,” Connor said. “Darrian had a good work ethic already, but she still absorbed some of that from Abi, and I think they both grew to new levels because they had to guard each other. Darrian also kind of picked up on Abi's court vision. Those were three great young ladies to coach.”

Coach Travis Connor: “It has been a true pleasure coaching Darrian. She's a clutch player that plays the game with moxie. From the moment she hit that half-court shot at Boonville her freshman year, we knew we had a special player. Her impact on the team and program is extremely difficult to put into words or measure. She's the type of student-athlete who pushes all around her to be better. Darrian Carmean is quite simply a winner.”

Coach Tad Shick: “Jayley was the player on our team who we counted on to score, and who the other team had to try and stop. She was a 3-point threat, but also got stronger this year and could finish around the rim. She finished the season in double figures in 28 of the 30 games we played, and she finished with over 570 points this season. She will be missed next year.”

Coach Hollie Eaves: “Mykayla is an all-around delight to coach. The last four years I have asked many things of her, and she never fell short. She buys in 100 percent into whatever she's doing.”

Connor: Maycee is one of those players who any coach truly feels blessed to have as a student athlete. She epitomizes a team-first competitor. She's one of the more coachable kids I've had. She brings a high motor to the gym day in and day out. She started every game, playing through some soreness, and she was always ready to go. She has great basketball instincts with a passion for the game, and she's an elite player who plays unselfishly. She can score in a variety of ways, and she has an uncanny ability to get to the offensive glass and finish.”

Coach Rick Marshall: “Tia is an outstanding player and an efficient player. She's an outstanding ball handler with extremely good court vision, plus she's an excellent passer. She has a tremendous mid-range game, and she's a lockdown defender. She's a physical player for her size, and she demands excellence from her teammates.”

Eaves: “Lexi is a tough-nosed kids. She was worked endless hours on improving her game. She was a huge key in advancing into the second round of the sectional with a 28-point game.”

Marshall: “Caroline is an awesome point guard. She was a team leader with great court awareness, and she became a better scorer this season. She can penetrate aggressively to the basket. She was like a second coach on the floor, and I could trust her to make the right offensive call. Her defense was much-improved this season. She was a passionate player.”

Eaves: “Hannah is an all-around competitor. She loves to win. She competed in every practice and game. Hannah was a huge part in our success this year, and the past three years.”

Connor: “Dani always took our most challenging defensive assignment, from point guard to post, and she's a tough-minded kid who started every game. Dani was extremely efficient with her shot selection, and she gives you whatever you need to win a basketball game. At times, Dani could be our best offensive rebounder on the floor, or our best shooter, or our best dribble-penetrator, or lockdown defender on the perimeter or in the paint. Her five 3s at Memorial were huge when we struggled scoring inside. Dani is a fierce competitor who brings physical toughness to the floor every night.”

Coach Steve Meurer: “She had a lot of weight on her shoulders. With Makinzi (Meurer) leaving, our scoring went down considerably, and (Poe) not only had to bring her offensive game, but she had to raise it defensively. Her defense improved more than anything, and she rebounded extremely well for a 5-5 guard. She was a great leader. We asked a lot out of a sophomore, and she filled the role really well. Her defense was a weakness last year, but it really came around, and I think she took pride in that.”

* Player of the Year