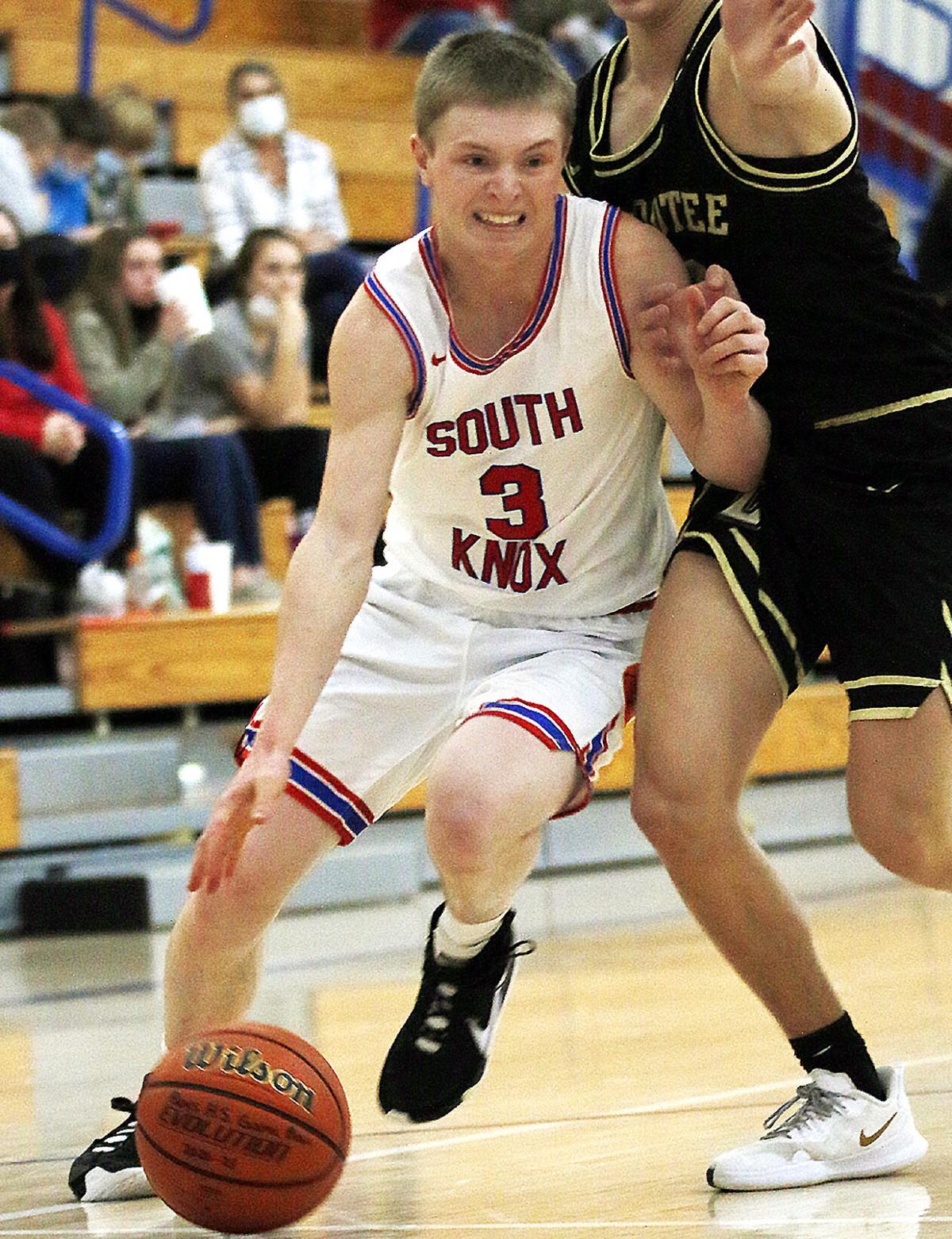 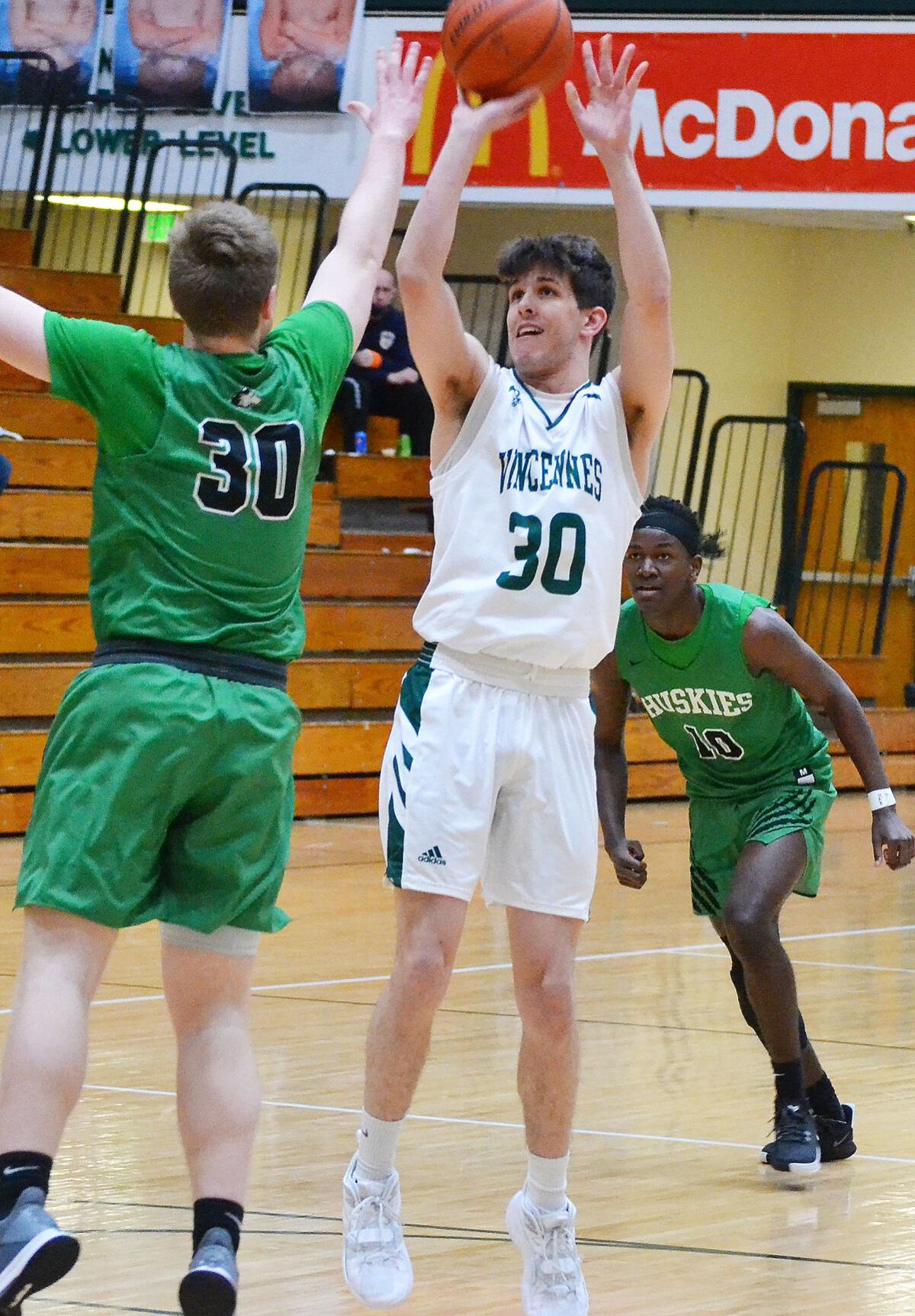 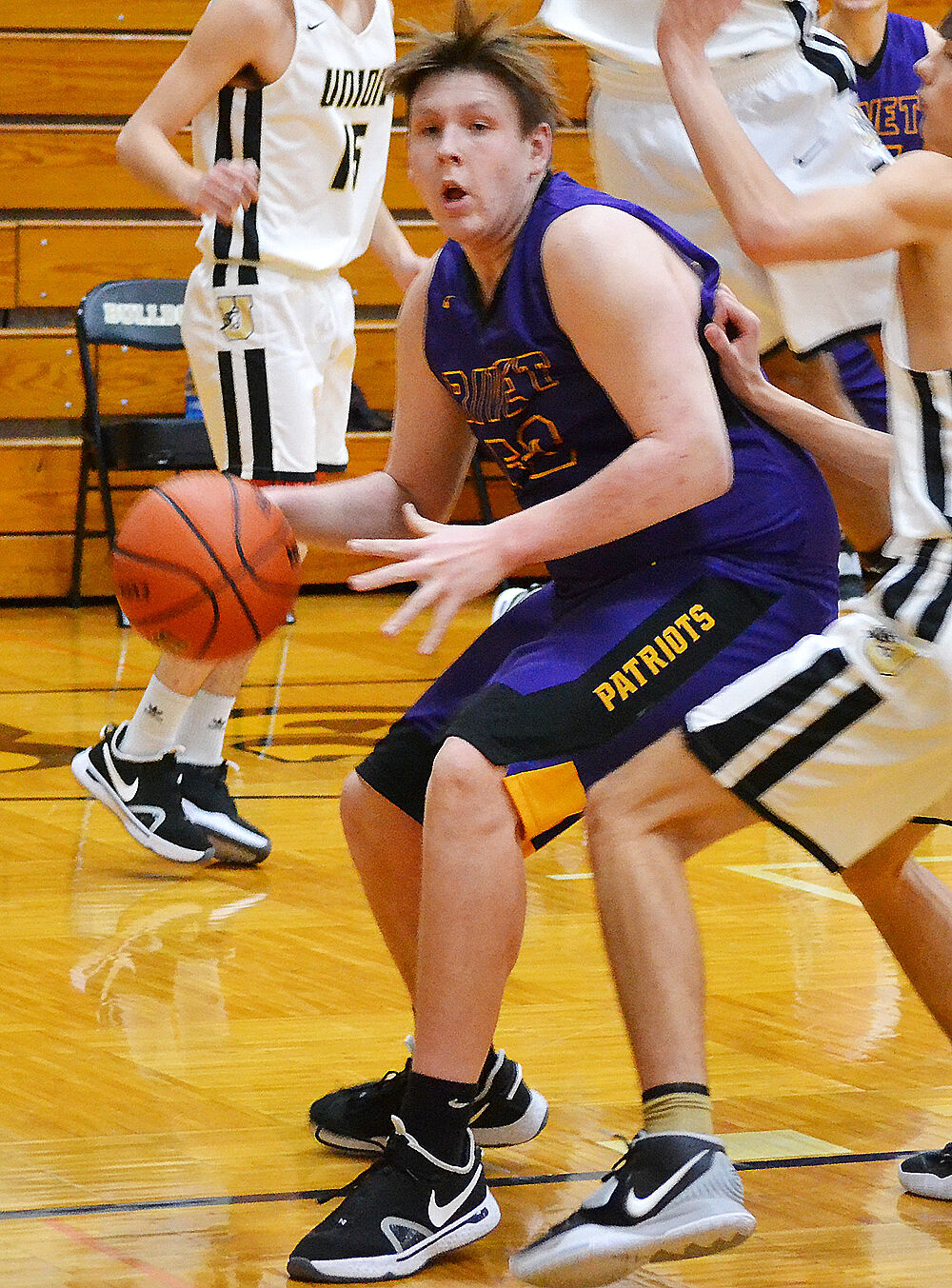 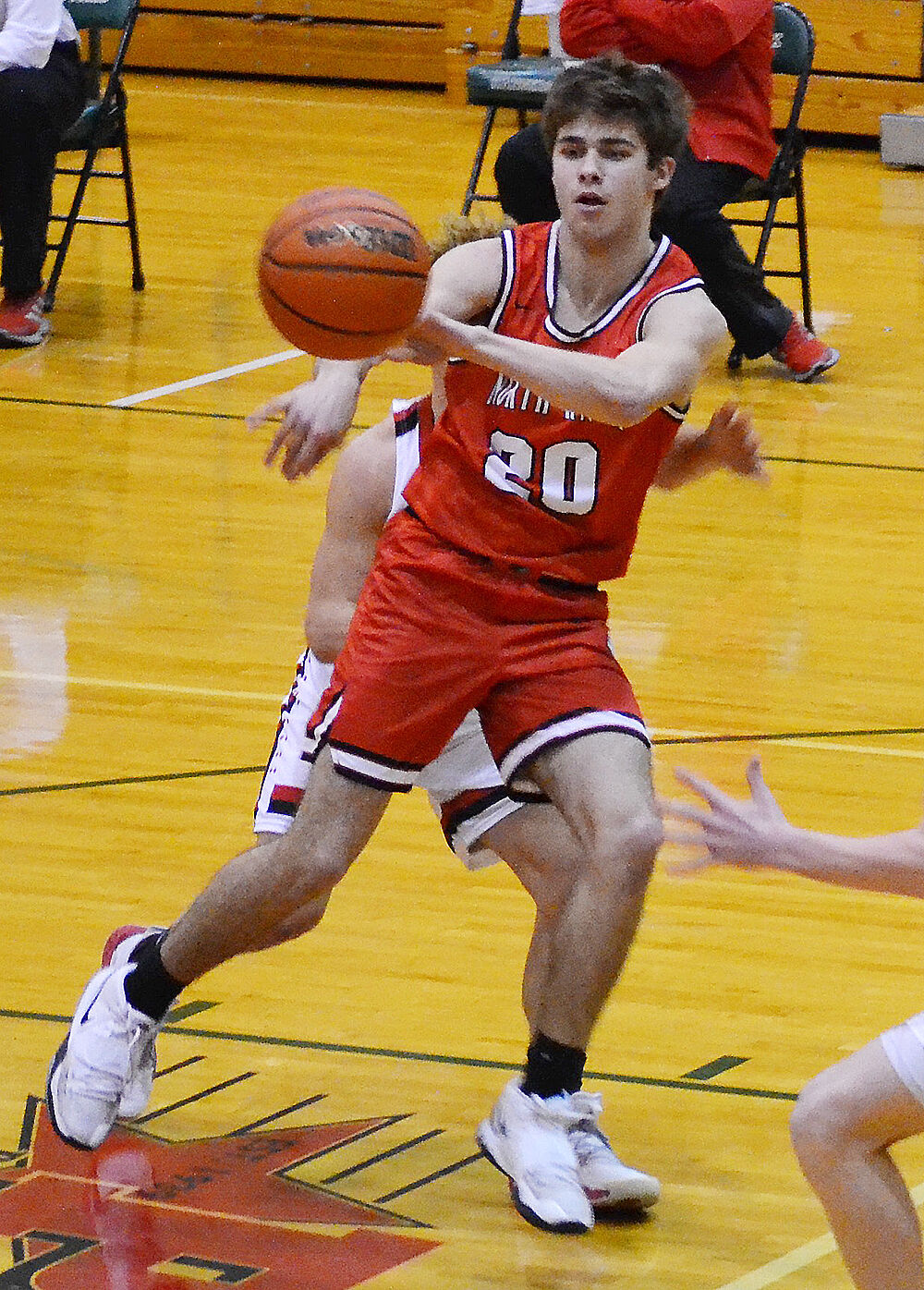 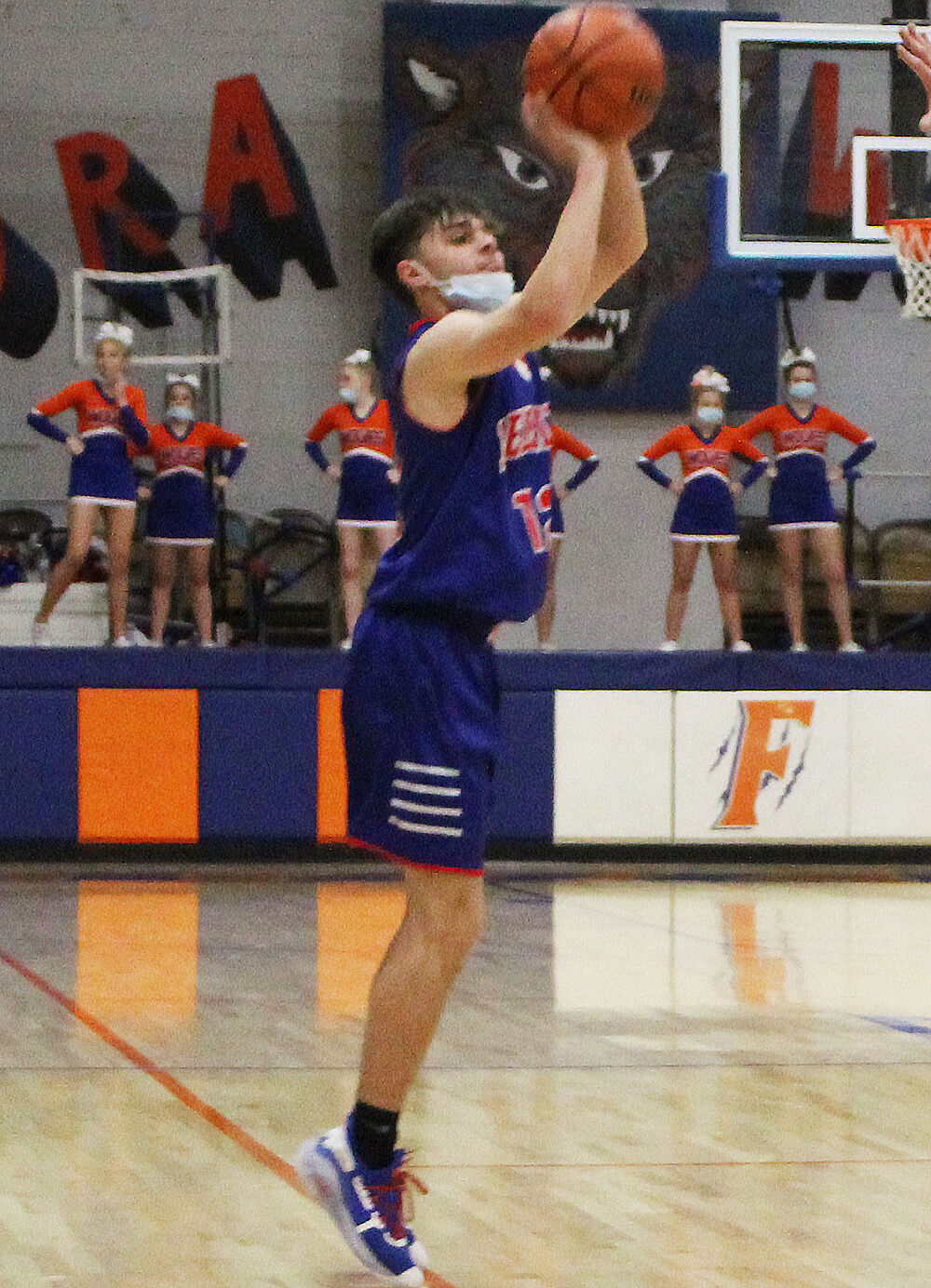 There are many ways players can contribute to their basketball teams. Some are measurable, like statistics or wins and losses, while others can't be quantified.

Whichever characteristic one might look for, there's a good chance they'd find it when observing this year's boys basketball Sun-Commercial Player of the Year Garrett Holscher.

The South Knox senior was the third-leading scorer in the area this season, and he was the only senior on the area's best team.

“He's an unbelievable leader. The kid played with every bit of heart that is humanly possible,” South Knox coach David Burkett said. “He's only 5-10, not a tall kid or very strong, but you can't measure the amount of heart he plays with. His teammates loved him. It was easy for them to follow him, and they all wanted to play hard for him.

“We talked over (last) summer that it was his team, that we were only going as far as he took us, leadership-wise. He took that as motivation. Growing up, fifth through eighth grade, he didn't win a lot of games, and he ended up being the only kid left in his class to play basketball. He stuck it out through the hard times, and he deserves all he can get for the dedication he's put into this program.”

Burkett noted that another thing that made Holscher so formidable is that he was basically a coach on the floor, with a similar thought process to Burkett.

“He's a true point guard, he understands the game, and he thinks the same way I do as far as seeing the game,” Burkett said. “The thing you want from your point guard as a head coach is to communicate and be on the same page. It got to the point where, at times, I didn't call any sets out. He would call them out. He'd recognize things. If I disagreed, we'd talk it about it.

“He's a tough kid, and his parents have done a good job with him. One reason he and I got along so much is because our personalities are a lot alike. I'm not the easiest to play for, so when I jumped all over him, he's not a kid that sat and pouted. He'd say 'Hey, I won't make that mistake again.' But as a senior, I hardly ever had to get on him, because he knew what I wanted.”

As with everyone who plays for South Knox, defense is an important aspect. While Burkett admitted Holscher may not be a “lock-down guy,” but he knows the senior was a good fit for the Spartans wanted to accomplish.

“One thing we demand (is defense), and we're usually ranked in the top 10 in defensive average, year in and year out,” he said. “(Holscher) was a part of our scheme. He knew the defensive principles and things like that, and you know he was going to do a good job. You knew he was going to compete every single possession.”

Holscher is the ninth South Knox player to earn boys basketball Player of the Year honors and the third in the last four seasons.

Bushey and Doades are repeat first-team selections, while Holscher and Ray were on the second-team last season.

South Knox finished 12-11, similar to last year's 13-12 mark, which is maybe the biggest example of Holscher's value this year after the Spartans graduated 2020 Player of the Year Justin Fickling, who led the area in scoring and nearly averaged a double-double.

Coach Jordan Myers: “He was our best and most consistent offensive threat, and he took on everyone's best matchup. To do that in our league (SIAC), for him to do what he did against the competition is impressive, especially with all the starts and stops we had to our season. It was a good year for him. He had 30 points against Borden, our first win in the Forest Park tournament, and he averaged 15-16 points a game in the SIAC. He seemed like he scored better against some of those better teams. He was a consistent threat we could rely on when we'd struggle to score a bit.”

Coach Mark Bezy: “His initial high school plans (as a freshman) were to be the basketball manager, and then he decided to play. He came in as nervous as any freshman I've seen, but he put his head down and kept working, making great strides along the way. He would have been a horrible manager compared to the player he became. He showed great senior leadership, and he kind of took a page out of everyone's book that came before him. He trusted what we were doing, and he exceeded our expectations by averaging a double-double as a senior. He was a workhorse all year long. He's a great leader and an even better kid and role model. He's making the most out of high school, playing every sport, knowing he probably won't get to do it after high school. It's pleasing to see his overall growth and the hard work he's put in pay off.”

Coach Daniel Crabtree: “Holtman is the motor that makes us go. He is an offensive weapon we try to utilize early and often, and he was the focal point on the opponent's scouting report. He is almost unstoppable in the open floor, and is one of the fastest kids in southwest Indiana. Holtman doubled his assist numbers this season, and had a double-double with 10 assists against Pike Central. He improved a ton on the defensive end over the last 10 games of the season. There is no doubt that Holtman will continue to improve because of his strong work ethic. We're excited to have him for another year.”

Coach Bryan Havill: “He brought toughness that we needed. He was a tough kid. Defensively he was one of our best players, and we usually put him on the best guard. So not only did he have to handle the ball for us and bring it up the floor, he was normally guarding the best player on the other team. We didn't get clicking as a team until probably the last week and a half, and I could see us turning that corner, starting to play some good ball. But Cam was a heady player, and he can shoot the basketball. He was pretty good at the line. He's a fun kid to coach, and I never had a problem with him. He was a very coachable kid.”

Coach Burkett: “His potential is through the roof. He's super intelligent, has a feel for the game and rebounds well. He's a great passer for a post player and can shoot with both hands. He probably tries to go left a little too much for being a right-handed player, but he's a guy we trust to handle the ball on the perimeter. My biggest worry this year was his defense and how he'd hold up strength-wise. But we started him against Reitz, and we held their big kid scoreless. That's not just Dakota, it's how we defend as a team, but that was the assignment he had that night, and he handled it well.”

Coach Crabtree: “I wish I could bottle Reece's competitiveness and force feed it to our younger players. Reece played point guard for us but really isn't a true point. He's just a basketball player who does what is needed to help his team. Reece is a player who could score 20+ one night, and maybe only four the next, but would impact the game with his defense and playmaking abilities. He was our best defender this year, and tied for the team lead in rebounding while being undersized. Reece is the kind of kid you want to go to battle with, but not against. He was a captain for us the last two years, and would be a vocal leader when we needed that from him. We won't be able to replace Reece, but we hope his leadership, competitiveness, and defensive intensity will rub off on our returning players.”

Coach Myers: “The stats don't tell the story on Julius. He averaged around seven and seven, but when he played our team was different. The offense ran through him. He was our best passer. He created a lot of attention, and he made things easier for the other guys. He typically took on the best post player our opponents had as well, and his physical presence will be hard to replace next year. Those are things that don't show up in the stat sheet. He was much more valuable than the numbers say he was.”

Coach Ian Laughlin: “He had a family vacation the first week of practice, so it took a bit for him to get caught up. But that's nobody's fault. Nobody knew if or when we were going to play, and it was kind of thrown on us. His shooting was important for us. He made people defend us differently because they couldn't help off him. He's a guy who's been through this before, starting over half of last year, and he did good things for us. He's an even better rebounder than he showed this year, and he's a versatile defender, as he can guard the perimeter or the post. As a team we were getting better at the end, and in an extended season, he would have been even better as the year went on.”

Coach David Burkett: “He usually got the assignment of most teams' best perimeter player, and he did a good job there. He didn't shoot the ball as consistently as what I'm going to need next year, but he rebounded his rear end off, leading us in rebounds. He really competes every single possession. He's got a good understanding of what a good shot is and what a bad shot is for us. He was one point away from making all-conference. The biggest thing for Brennon is that we just need him to shoot it at a higher percentage next year.”

No Wildcat has had more coaches than Josh McCauley; his newest one is teaching him a new position

The NCAA volleyball tournament starts Wednesday: A quick refresher on how it will look and go