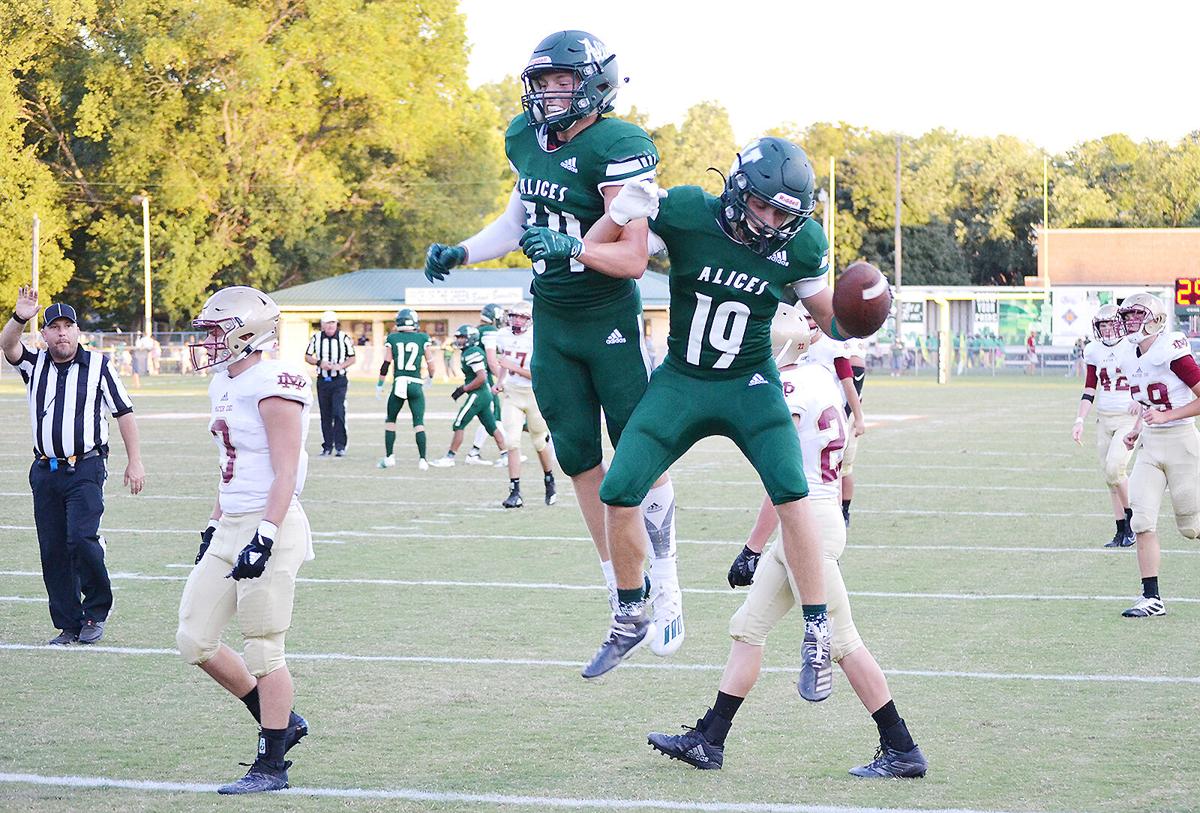 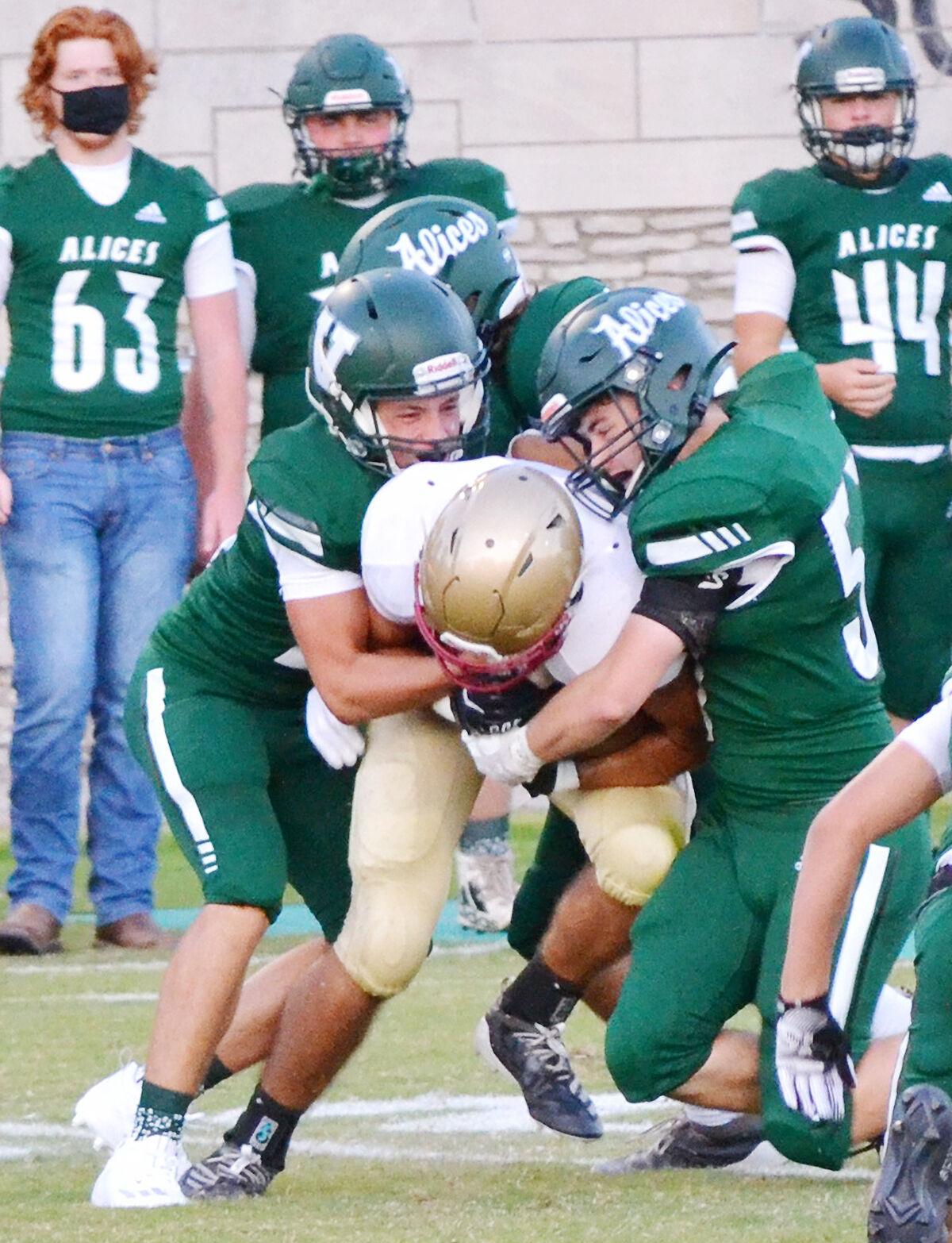 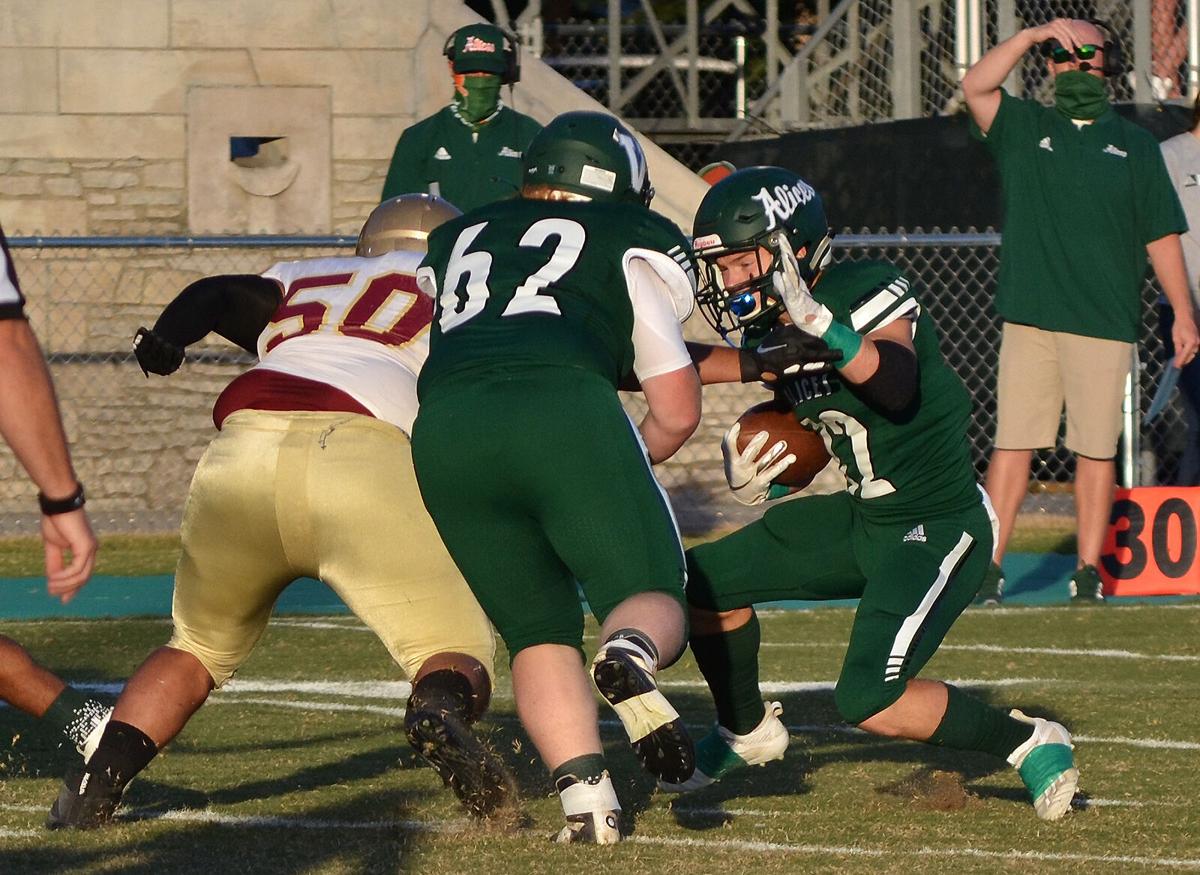 after halftime in 17-7 defeat

Lincoln’s defense did about all it could to contain Class 2A No. 8 Evansville Mater Dei on Friday, but the Alices’ offense didn’t do near enough to assist it.

The 3A honorable mention Alices took a first-quarter lead, but the Wildcats shut them out the rest of the way, and Lincoln fell to the visitors, 17-7, in a Southern Indiana Athletic Conference game at Inman Field.

E Smith carried 20 times for 85 yards for Lincoln, while quarterback Eric Vickers completed 14-of-30 for 131 yards with a touchdown and two interceptions. Blake Mincey was the primary target this week, snagging six catches for 91 yards. The Alices (1-2) actually outgained the Wildcats, 258-226, but Mater Dei made the plays when they mattered

“Going in we knew their defense was extremely good, and you know what you’re going to get when you play Mater Dei. There’s no give-up in those kids, and they’re 0-2, so you knew they were going to play hard,” Lincoln coach Levi Salters said. “Our kids played hard too, but against a good defense like that, you can’t get behind the chains. We had some big penalties to start drives, and that’s tough to come back from.”

The Wildcats (1-2) took a 10-7 lead when Jordan Atherton drilled a 31-yard field goal with 3:13 to go in the third quarter, and Lincoln had its best chance to go ahead on the ensuing drive.

The Alices’ possession appeared to be done on the final play of the third, but to open the fourth, Lincoln ran a fake punt, and after a double hand-off, the punter Mincey snuck out for a 27-yard reception from Elijah Hovland to move Lincoln into Mater Dei territory at the 38-yard line. A hold nearly stopped the drive again, but Vickers found Mincey for a 24-yard gain to get to the 19.

But Lincoln failed to move it much more and turned it over on downs four plays later.

The defense held solid to get the ball back, but Quinn Miller threw an interception on a trick play to give the Wildcats the ball back at their own 1. Miller quickly returned the favor with his own defensive interception, however the Lincoln offense moved it just three yards in four plays before giving it back on downs with 4:53 to go.

From there, the Wildcats marched down the field, running off over three minutes. They punched it in on a 3rd-and-9 when the Lincoln defense bit hard on a play-action pass, and Mason Wunderlich hit Eli McDurmon for a 24-yard score to seal it. Atherton’s extra point made it, 17-7, with 1:41 to go.

Lincoln’s offense only had three first downs in the second half prior to the final drive, which ended with a holding penalty followed by an interception on a deep ball by Vickers.

“We’re playing the blue bloods of southern Indiana, and it doesn’t get any easier. But I told the kids, we want to be the toughest team we can be when we get to tournament time, and playing this schedule is going to prepare us for it. There’s really no off weeks in this conference,” Salters said. “When you’re playing teams like this, you have to go out and beat them. They’re not going to give it to you.”

Wunderlich was 16-of-28 for 156 yards and two scores, while leading rusher Joey Pierre finished with 50 yards on 16 carries. The Alices held him to six yards on five carries in the first half.

The first half was a defensive battle at 7-7 with both teams punting four times, but Lincoln was in control most of the way.

After the teams traded turnovers, the Alices' defense stuffed Mater Dei on the Wildcats' 1-yard line, and Lincoln took over after the punt at the 31. A holding penalty threatened to kill the drive, but Vickers hit Quinn Miller for a 15-yard gain, and on the next play Vickers evaded pressure and found Mincey for a 20-yard TD strike. Jonathan Soderling made the extra point to make it 7-0 with 2:47 left in the opening period.

Lincoln’s next possession started at its own 41, but a block in the back penalty pushed them back inside the 30, and the drive quickly stalled as the second quarter began.

Following four straight punts, the Alices regained possession at their own 12 with 2:40 remaining. But they only managed to run a little over a minute off the clock before Mater Dei forced a punt. Starting at the Lincoln 43, the Wildcats needed just four plays to find the end zone. Wunderlich was 3-for-4 on the drive, finishing with a 17-yard scoring pass to Ryan Taylor with :49 showing in the half.

Lincoln ran one play on the ensuing series and took it to halftime.