Lincoln's Rae Haislip looks for running room as Favian Hernandez holds his block during the Alices' contest with Mount Vernon last September. Both Haislip and Hernandez return this season as Lincoln visits the Wildcats for likely the last time in football as the Big Eight is set to fold next spring. 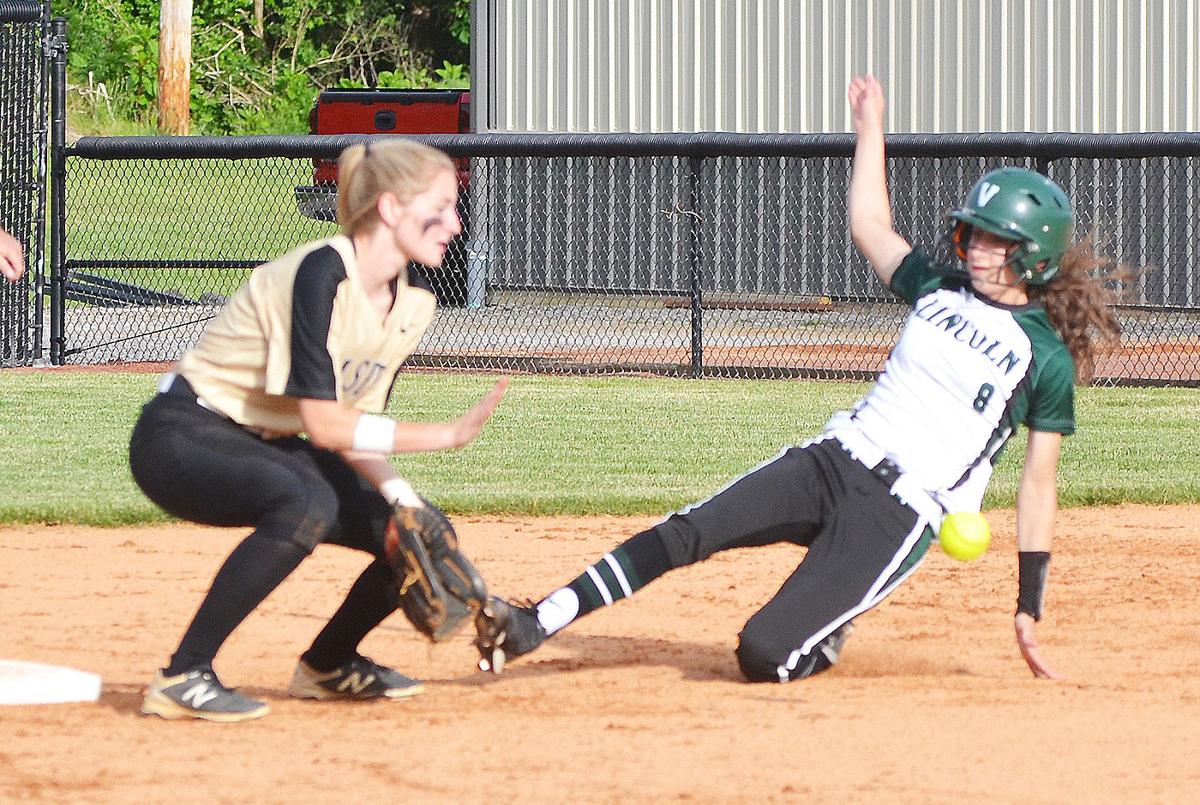 Lincoln's Kali Haynes slides safely into second for a stolen base during the Alices' contest in the Jasper Sectional against the host Wildcats in May. Despite the Big Eight Conference folding after the 2019-20 school year, the rivalry between Lincoln and Jasper will remain intact, as both schools head to the Southern Indiana Athletic Conference.

Lincoln's Rae Haislip looks for running room as Favian Hernandez holds his block during the Alices' contest with Mount Vernon last September. Both Haislip and Hernandez return this season as Lincoln visits the Wildcats for likely the last time in football as the Big Eight is set to fold next spring.

Lincoln's Kali Haynes slides safely into second for a stolen base during the Alices' contest in the Jasper Sectional against the host Wildcats in May. Despite the Big Eight Conference folding after the 2019-20 school year, the rivalry between Lincoln and Jasper will remain intact, as both schools head to the Southern Indiana Athletic Conference.

Three weeks from today, Lincoln's girls golf team will open the 2019-20 athletic season for the school, competing in the Washington Invitational.

The event marks the beginning of the end, as this will be the 40th and final school year for the Big Eight Conference.

The actual beginning of the end happened in March, when Mount Carmel opted to exit the league due to a new Illinois High School Association rule, which would have forced it out in 2021 anyway, and it didn't take long for the rest of the conference to crumble. Within months, Lincoln and Jasper were headed to the Southern Indiana Athletic Conference, and Washington, Princeton, Mount Vernon and Boonville joined the Pocket Athletic Conference. The new versions of the SIAC and PAC don't start until the 2020-21 school year.

The Alices have won 74 Big Eight championships, and boys basketball leads the way among Lincoln teams — and other league hoops squads for that matter — winning 21 conference titles, 15 of them outright. Washington is next with nine in the sport. But it's girls basketball that has the most recent Big Eight crown for Lincoln. There were no league championships at the school last year, but the Lady Alices capped off a perfect 6-0 mark in January of 2018, albeit less than a week after the wrestling Alices won their last Big Eight title.

Lincoln should be competitive in most sports in the upcoming year, but the three where they're expected to be among the favorites to win the Big Eight are football, girls basketball and softball.

The basketball Lady Alices have been one of the best at the school in recent years, highlighted by their four consecutive sectional championships.

“I think we're on a five-year run of being first or second in the conference. It's one of those extra things that you can circle, another chance to get a championship,” Lincoln girls basketball coach Travis Connor said. “There are some things that will be missed, like the rivalries. But I'll miss the friendships I've made with some of the coaches. When I took over (in 2010), there were some great mentors coaching in the conference who taught me how to do things the right way. I'll miss those coaching conversations.”

Connor also coached against the two best girls basketball players to come through the conference, Princeton's Jackie Young and Mount Carmel's Tyra Buss. Among their numerous accolades, both finished high school as their state's all-time leading scorers and won college titles in 2018. Young helped Notre Dame to a NCAA Championship, while Buss led Indiana to an NIT crown. Young was also the No. 1 pick in the WNBA draft by Las Vegas in March.

“My first year was Tyra's freshman year, so we had six straight years playing against one or both of them every season. They're elite players. I'd call them once in a generation, but they're about the same age and they grew up a few miles apart. All our girls that played against them can watch them now, knowing we competed against those two great kids,” Connor said.

The conference hasn't lacked for Division I talent in football either. Lincoln's Curtis Painter still holds the single-season record for passing yards at Purdue, while Jasper's Matt Mauck quarterbacked LSU to the National Championship in 2003, the first of coach Nick Saban's six titles. Both had brief NFL stints as well.

“In the late 90s and early 2000s, I think that's when the Lincoln-Jasper rivalry was at its peak,” said Alices football coach Levi Salters, who graduated with Painter in 2004. “Both teams were pretty darn good at the time. They won state in 2001, and we knocked them off in the regular season the following year.”

Salters was a member of five Big Eight champions as a player, across football, basketball and baseball, and he guided the Alices to their most recent league title in 2017, his first season as coach. Salters admitted that going out on top in the conference's final season would be sweet.

“I'd be lying if I said this is something we hadn't talked with our kids about. It was something we brought up at our first open field,” he said. “I don't know if the kids will put much thought into it, but we feel like we have a team that can be on that level. Knowing the history of the league, it would sure be nice. Boonville was undefeated last year. They lost a lot, but they'll still be the team to beat. And of course, you can't sleep on Jasper.”

The softball Alices have only one Big Eight title, grabbing part of a three-way tie in 2015. Boonville has dominated the Big Eight, failing to earn at least a share of the championship only three times since the league added the sport in 1994-95.

“Boonville's basically been the powerhouse, so (2015) was a special year and a special team,” Alices softball coach Chaz Hendrix said. “I think we've only beaten Boonville once, and that year, Jade Montgomery shut them out and hit a home run in the seventh to give us a 1-0 victory. Jasper beat us, so we had to share it with both of them, but it was still a special time for our softball team for sure.”

Like Salters, Hendrix also has a Big Eight title as a Lincoln athlete, starting for the 1997 baseball Alices. Given that the softball season is over eight months away, Hendrix said he hasn't given a lot of consideration as to what it might mean to go out with the final conference crown.

“I haven't thought about it much, but it would be kind of special to finish out with another championship, and put another number on our scoreboard,” he said. “There's going to be some tough competition in the SIAC, not that the Big Eight is easy, but I guess it would be fun to go out on top.

“I've developed some good relationships with the other coaches, and that will be difficult. It still feels kind of bizarre (that the conference is folding). But the relationships I've made were special, and other than the 2015 team, that's probably what I'll remember most about my seven years coaching in the conference.”

Founded in 1980, the Big Eight has been a good home for the Alices. While Jasper has been the most dominant school in the league, taking home nearly 300 conference titles among 19 boys and girls sports, the Big Eight has been mostly balanced beyond that. Mount Vernon is second behind Jasper with 101, thanks mostly to its dominance in boys and girls swimming (24 titles by each). Boonville is just ahead of Lincoln with 75, Washington's not far behind with 64, and Princeton has 41.

Not counting individual champions, the Alices have failed to win the conference in seven sports, volleyball, girls golf, girls soccer, boys and girls swimming and boys and girls track. With the loss of just one key player to graduation from a 28-win sectional champion, the volleyball Alices would seem to have the best opportunity of that bunch to get their first title in their final attempt.

The Big Eight has claimed 17 State Championships, including a pair from Lincoln, 1981 boys basketball and 2002 baseball.

The Alices still hold a pair of league track records as well. Rich Huff is the fastest in the boys 200-meter dash, finishing in 22.5 in 1985, while Rachel Frey cleared 10-0 in the girls pole vault in 2018 to tie Boonville's Amanda Downey, who originally set the mark in 2010.

Lincoln's most successful Big Eight event, outside of boys basketball, was the Academic Super Bowl, which ran from 1988 through 2014. No champion was crowned during four of those years, but the Alices won the title 10 times in the other 22 tries.

Jasper won the all-sports Big Eight crown the first 14 years of the league's existence before the conference began to give out boys and girls all-sports titles. Lincoln's boys took the all-sports award three straight years from 1995-1998, and Mount Vernon (boys four times, girls once) is the only other school to claim an all-sports championship.

The 2019-20 school year will be the last for the Big Eight Conference, which was founded for the 1980-81 school year. Lincoln has won 74 league championships. Here's a breakdown by each sport:

Sport |No. of titles |First title |Most recent