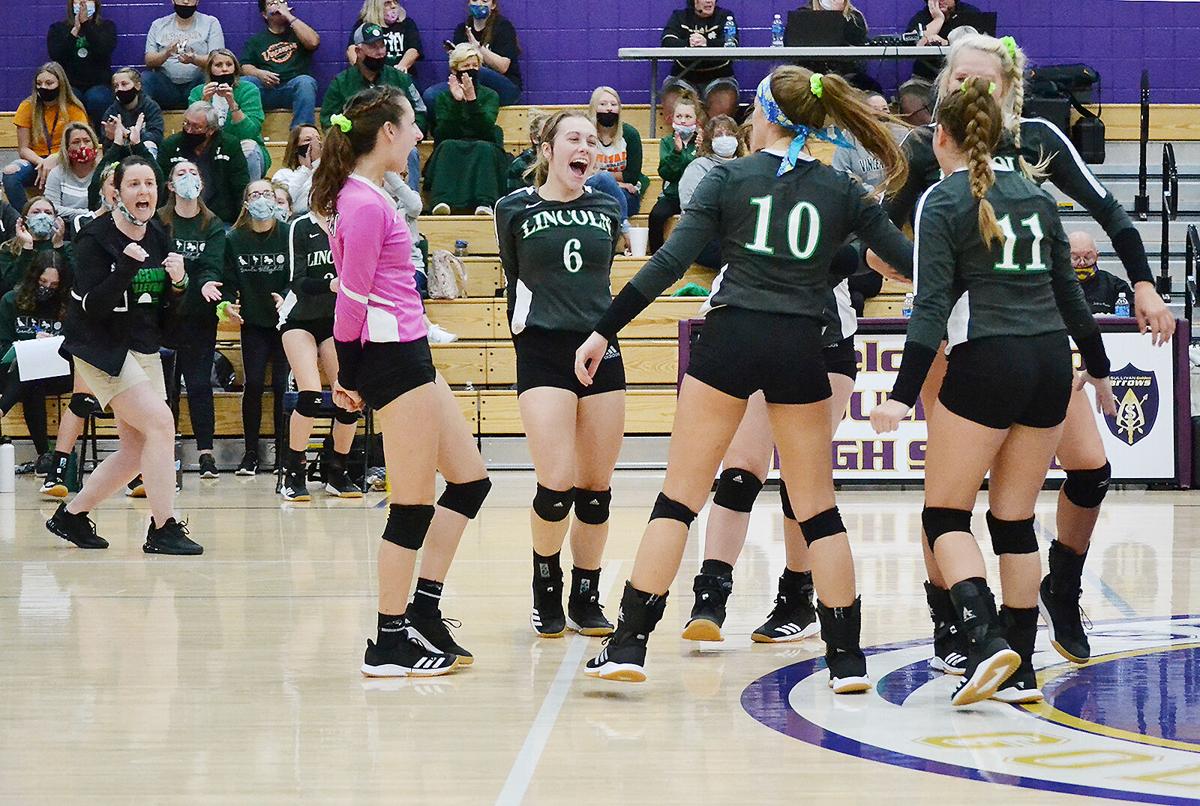 Lincoln coach Casey Bowles, left, celebrates a point with her players, from left, Kali Haynes, Livie Koenig (6), Callie Foster (10) and Mackenzie Newland (11) in the Class 3A Sullivan Sectional on Saturday. 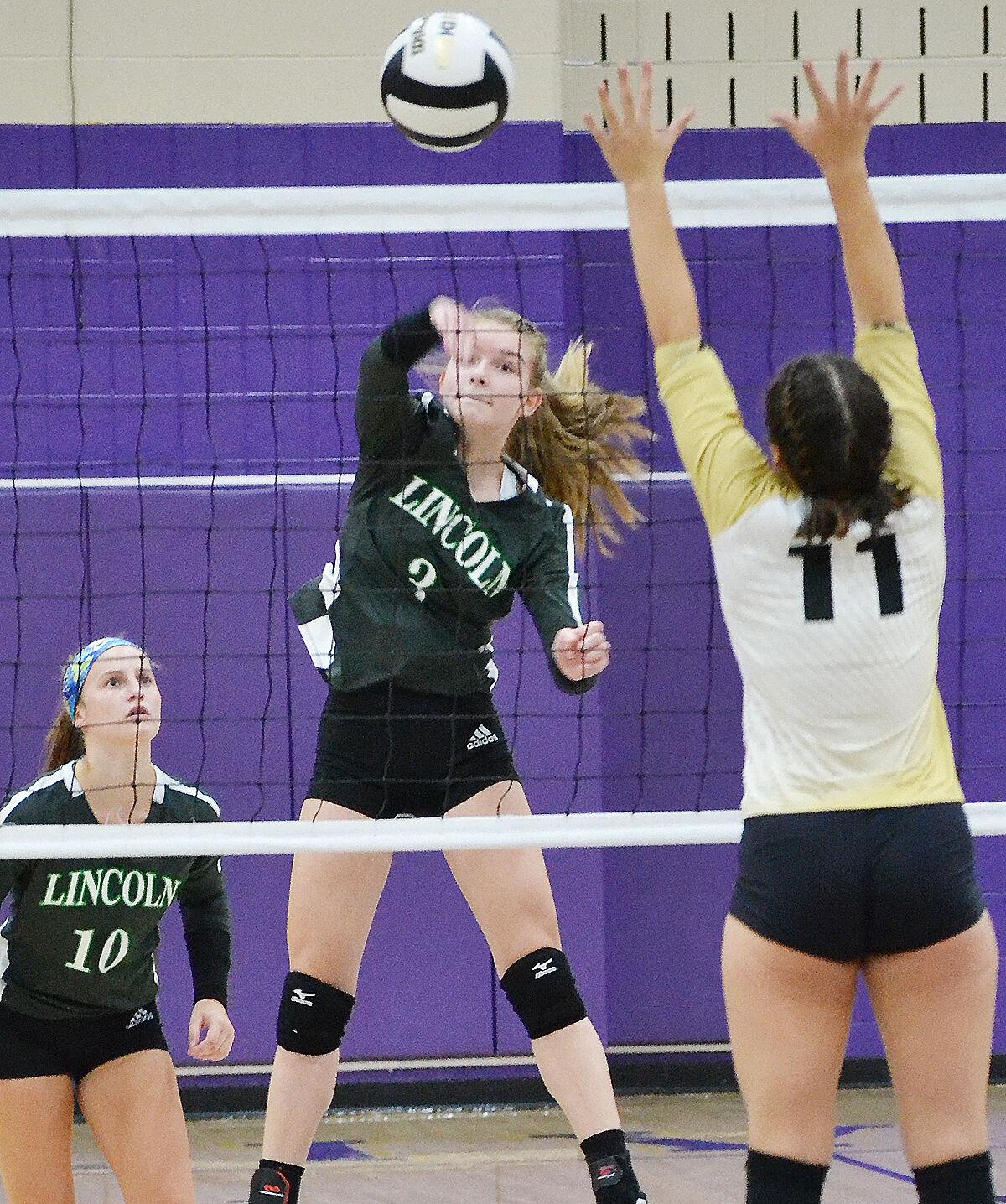 Lincoln's Faith Fleetwood slams a spike around the blocking attempt of Washington's Isabella Thorne (11) while teammate Callie Foster looks on during the semifinals of the Class 3A Sullivan Sectional Saturday.

Lincoln coach Casey Bowles, left, celebrates a point with her players, from left, Kali Haynes, Livie Koenig (6), Callie Foster (10) and Mackenzie Newland (11) in the Class 3A Sullivan Sectional on Saturday.

Lincoln's Faith Fleetwood slams a spike around the blocking attempt of Washington's Isabella Thorne (11) while teammate Callie Foster looks on during the semifinals of the Class 3A Sullivan Sectional Saturday.

SULLIVAN — Evan as a two-time defending sectional champion, it wasn't supposed to be easy for Lincoln's volleyball team in the Class 3A Sullivan Sectional on Saturday. But the Alices sure made it look that way.

After shrugging off a first-set loss in the sectional semifinal Saturday afternoon, Lincoln won its next six sets, including a dominating 25-17, 25-13, 25-8 title game victory over the host Golden Arrows to make it three consecutive sectional crowns.

Lincoln plays in the Corydon Central Regional at 10 a.m. next Saturday against Mount Vernon, which rallied from a two-set deficit in the sectional championship Saturday to defeat Evansville Memorial.

Winning a sectional in any sport is an accomplishment, but considering the volley Alices had gone 25 years without a sectional championships before starting this recent run, three in a row is a phenomenal feat.

“It never gets old,” Lincoln coach Casey Bowles said. “It's really special to see these kids (win it), with how much time they've put in, they way they've bought in, and how they care about each other. They've worked their tails off, and it's great to see that hard work pay off. Most games we go in undersized, usually going against taller teams, but these girls believe that if they play together they can beat anybody.”

The Alices (24-9) certainly looked prepared to take down anyone against Sullivan (16-15) in the championship game. After rallying to knock off Washington in four sets Saturday afternoon, Lincoln never trailed, controlling the Arrows from start to finish.

Haynes was on serve when the tide shifted to Lincoln in the first set as the Alices extended a 6-5 lead to 11-5. Sullivan never threatened the margin closer than three the rest of the set. Lange controlled the net with seven kills and three blocks.

Lange's serving was on display in the second set. Her run of four straight points, including an ace, put Lincoln in front, 9-4, and Kyndall Myers and Allyson Beckort were on serve for the Alices in a 6-1 spurt to take the lead to 19-8. Lange added seven more kills in the second set.

“She's worked hard to get where she's at, and she's improved a lot,” Bowles said of Lange. “It takes six people on the court all on the same page, and sometimes that's hard. But these girls bought into each other, and it's paid off.”

The third set was never in doubt as Lincoln soared to a 14-3 lead. Fittingly, Lange spiked home the final kill of the match. Sullivan strung together consecutive points only six times in the match, and three of those instances were in the first set.

Badgers football is back, and so is the bounce in Barry Alvarez's step

Many meaningful reasons behind Arizona RB Gary Brightwell’s switch to No. 0

Bowles agreed that her squad carried over the momentum it had from the semifinal rally against Washington, which defeated Lincoln in five sets in the regular season.

“We played well (in the semifinal), and the girls felt good about it. They were antsy between games,” she said. “We had good senior leadership. They kept everyone accountable and made sure they stayed focused. It helps when you have a player-led team.”

The Alices never led after getting behind, 3-0, and Washington (24-7) closed out the set with a 5-1 spurt, including the winning kill by Alaina Thorne, who put up six kills and two blocks in the set.

Bowles said the team's week layoff due to drawing a bye played a role in her team's early struggles.

“We've never had to practice for five days in a row, and we came out a little sluggish,” she said. “The good thing about volleyball is that you can play sluggish for a set, but then be back to 0-0. You're not behind 40 points because you played a bad quarter. That's what we talked about in the huddle, and we used that to our advantage. Our senior leadership stepped up, called everyone out, and the girls responded well.

“Our role players stepped up. Faith had one of her best games, and Cameron Cary gave us some good defense.”

Fleetwood had seven of her 10 kills in the middle two sets, and Lange was dominant in those two sets as well with 12 kills and two blocks. She finished with 23 kills.

After controlling the second set, the Alices carried that momentum into the third, scoring the first four points in a 7-2 start. The Hatchets never got the margin tighter than four as Lincoln closed it out, 25-20.

Washington built an 8-5 lead in the fourth set, but Haynes' six-point serving, which included two aces and a Lange block, gave Lincoln a 16-10 lead, and the gap never closed to less than four.

Foster had 45 assists and 10 digs, Haynes had 28 digs and seven aces, and Livie Koenig had 24 digs and six kills.