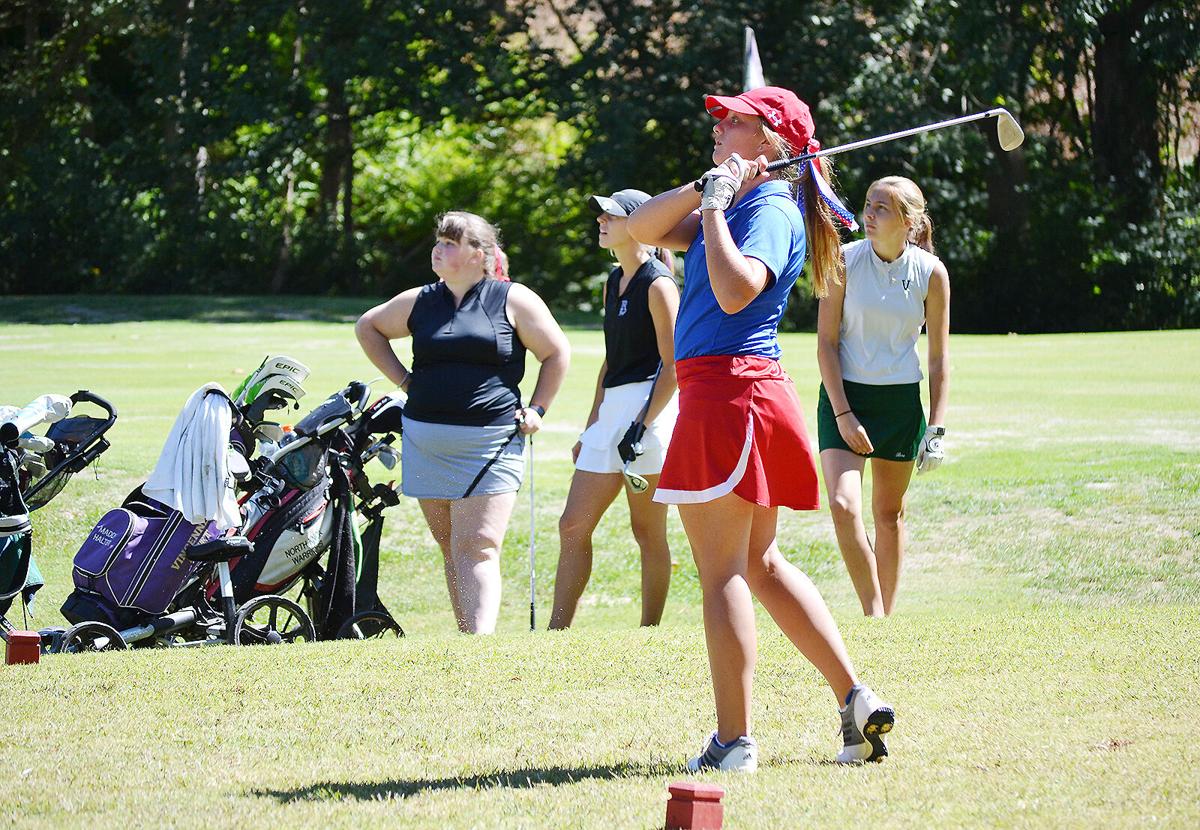 South Knox's Trinity Dubbs watches her tee shot on the 13th hole as playing partners, from left, North Knox's Isabella May, Rivet's Maddi Halter and Lincoln's Macy Sexton look on Saturday during the Vincennes Sectional at the Country Club of Old Vincennes. 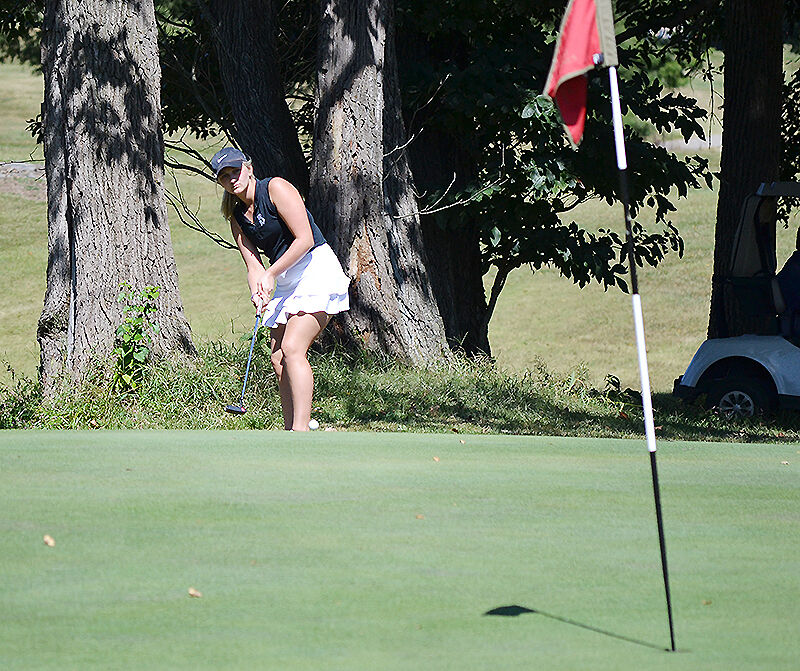 Rivet's Lily Waggoner putts on the 14th green in the Vincennes Sectional on Saturday. 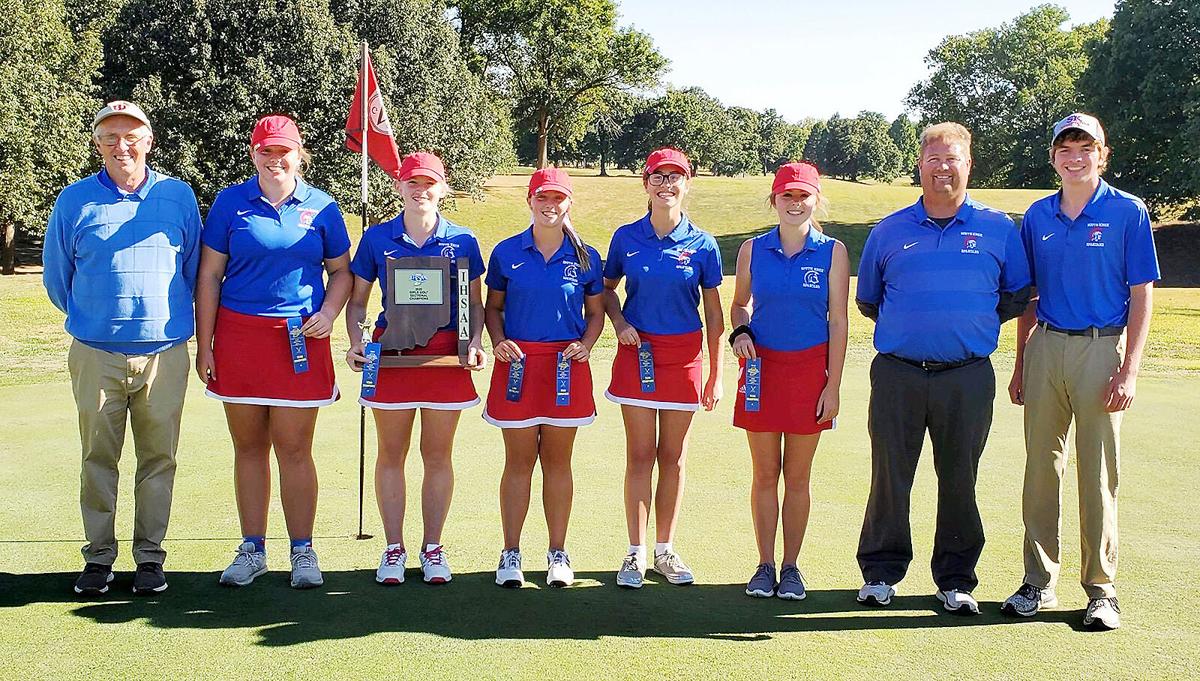 South Knox's Trinity Dubbs watches her tee shot on the 13th hole as playing partners, from left, North Knox's Isabella May, Rivet's Maddi Halter and Lincoln's Macy Sexton look on Saturday during the Vincennes Sectional at the Country Club of Old Vincennes.

Rivet's Lily Waggoner putts on the 14th green in the Vincennes Sectional on Saturday.

South Knox gets its first sectional by one stroke

Every shot counts in golf, no matter how good or bad, how long or short it is. The South Knox and Rivet girls golf teams were the latest to get that reminder Saturday in the Vincennes Sectional.

The Spartans had the medalist in Trinity Dubbs, who shot a 77, and career-best rounds from Bethany Williams and Lauren Haveman. They needed every stroke they saved at the Country Club of Old Vincennes in edging the Patriots, 360-361, for the school's first sectional trophy.

As expected, it was a county 1-2-3 finish for the first time as Lincoln excelled with its best score of the season, 388. They all advance to next week's Washington Regional at Country Oaks, along with North Knox's Emma Miller, who was among the three lowest scores on non-qualifying teams.

It was a good omen early for South Knox when Dubbs eagled the par-5 opening hole. She was consistent throughout with nines of 39 and 38. The sophomore had plenty of help. Williams tallied a 91 and Haveman a 94. Salena Dellinger was the fourth scorer at 98, charging on the back nine with a 45.

Spartans coach Mark Gray said he was "almost speechless." The team made just its first regional appearance a year ago. Four of those players returned, and Gray pointed out that foursome had a combined 403 at last year's sectional.

"It's just an honor to go to the regional, and our goal was just to go back. But winning today, I'm not sure it has sunk in yet," Gray said. "The girls have worked so hard. To have a 40-plus shot improvement from those four girls is remarkable. Then add in that the course was fast, it was windy, and we started in 40-degree weather.

"Winning the sectional was something we really didn't talk about. Our best score was about 370, so to even catch Rivet we were going to have to take some shots off that," Gray said. "Lauren has played four years with us, and to have a career-best round today, we were all elated for her. Obviously we don't win without what Bethany and Lauren did today."

Rivet came in as the team to beat, having won eight of the nine sectionals it has entered. The Patriots shot just one stroke worse than they did a year ago when they took the title, but it was one too many.

The Other Side: Q&A with Hawaii beat writer Stephen Tsai

Lily Waggoner led Rivet with an 88. Emma Robinson carded an 89, Alicia McGuire 91 and Cadence Mills 93. All four players had strong back nines, with Waggoner at 41, Robinson 42, Mills 43 and McGuire 44. They were career-best rounds for Robinson, McGuire and Mills.

"It's tough to lose by one stroke. We've had 10 teams, won eight sectionals and have lost one by a fifth-player tiebreaker and now by one shot," Waggoner said. "It's a great life lesson for them. In sports, in your career, you leave it all out there because sometimes you just don't realize how close to winning you are.

"I have to give South Knox credit. I know those girls have worked hard all year, and they were ready to play," he said. "The biggest thing I take from it is that our three through five golfers had their personal bests. I know our girls wanted to win it for (hospitalized teammate Victoria Linn), but we still get to advance and have another shot at the regional."

Lincoln, fighting to break 200 all year for nine holes, fired a 189 on the back nine Saturday to claim third place comfortably.

The Alices were paced by Gwen Hayes' career-best round of 81, the second-lowest score in the field. Freshman Macy Sexton had 93, Kaylan Finatri 101 and Bailey Robb 113. Hayes notched the best nine-hole score with a back-nine 37.

"Our goal was to get under 400, and we overachieved," Lincoln coach Jeff Mattingly said. "I was ready for anything because I knew it was going to be tough, and that's just the mental side of it . I was happy with how they dealt with it, and I'm thrilled for them and our three seniors (Finatri, Robb, Reece Johnson) that they get to go to the regional. This is something they'll remember long after they're done with school.

"Gwen had a great week of practice, she was locked in on the course, and I tried to stay out of her way. It wasn't a surprise to me that she posted a good score," he said.

Miller's 95 led North Knox and was the second of the three low scores not on advancing teams, placing in the middle of North Daviess' Gracey Knepp (93) and Pike Central's Sophie Carnahan (97).

Isabella May and Milee Lane shot 103 for the Warriors, and Maddie Becher 112.

"That was a personal best for Emma, and I'm extremely happy for her. Making it to regionals is a great accomplishment," Warriors coach Carrie Loheider said. "I'm disappointed for our team. I really thought if we played our best, we might have a chance to advance. Unfortunately, it wasn't meant to be. We're going to miss Sarah Richardson and her senior leadership."