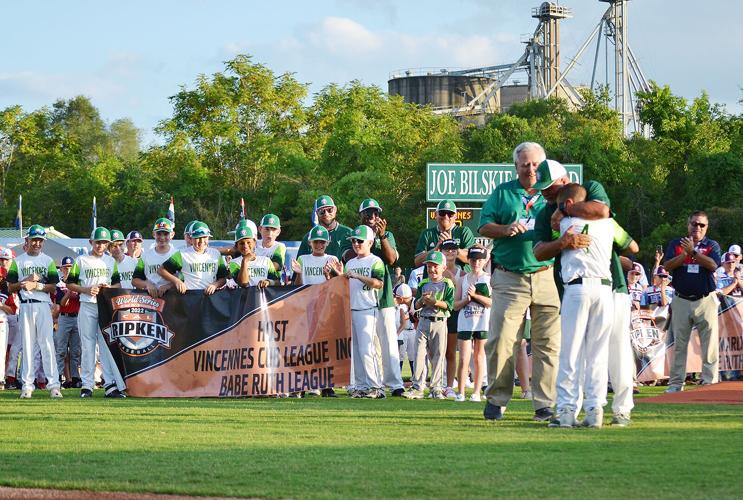 Longtime Cub League volunteer Fred McCormick hugs his grandson, Rylan Hunckler, after throwing out the first pitch at the 10-year-old Cal Ripken World Series on Friday at Joe Bilskie Sr. Field. Behind McCormick is Cub League president Kirk Bouchie, with Hunckler's teammates, the Vincennes Green looking on. Vincennes is hosting its seventh World Series and the 20 teams are competing through next Saturday. 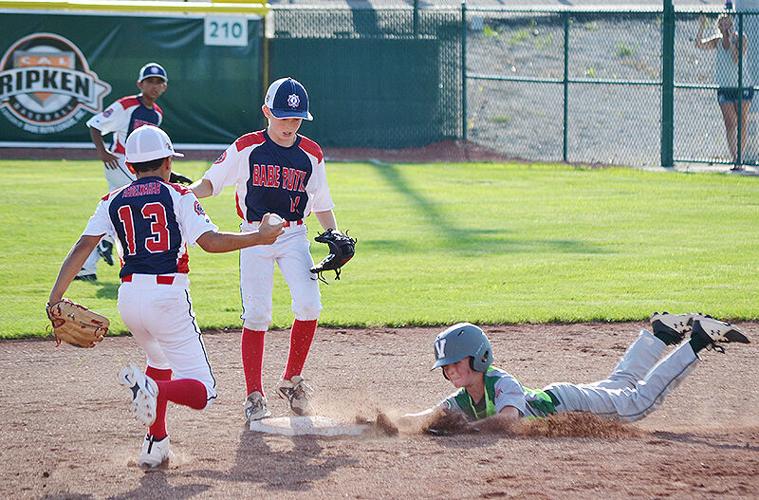 Vincennes White's Collin Smith dives into second base safely during some confusion between New Canaan shortstop Sammy Abdelwahab and second baseman Sam Ericson on Friday during their opening game in the 10-year-old Cal Ripken World Series.

Longtime Cub League volunteer Fred McCormick hugs his grandson, Rylan Hunckler, after throwing out the first pitch at the 10-year-old Cal Ripken World Series on Friday at Joe Bilskie Sr. Field. Behind McCormick is Cub League president Kirk Bouchie, with Hunckler's teammates, the Vincennes Green looking on. Vincennes is hosting its seventh World Series and the 20 teams are competing through next Saturday.

Vincennes White's Collin Smith dives into second base safely during some confusion between New Canaan shortstop Sammy Abdelwahab and second baseman Sam Ericson on Friday during their opening game in the 10-year-old Cal Ripken World Series.

Two long-time Vincennes Cub League contributors were recognized in a night of celebration, and four games were played on Friday as the 10-year-old Cal Ripken World Series got underway at Joe Bilskie Sr. Field.

Those Cub League stalwarts recognized were Matt Minderman and Fred McCormick. Both served countless duties at the Cub League for decades, including work at the previous six World Series hosted by Cub League.

Minderman, who passed away in 2019, was inducted into the Babe Ruth League Baseball Hall of Fame on Friday, while McCormick threw out the ceremonial first pitch during the Opening Ceremony, fittingly caught by his grandson Rylan Hunckler, who's playing this week with the Vincennes Green.

“There's no question Matt Minderman is a Hall of Famer here at Cub League, and throughout the Ohio Valley and nationally,” Cub League President Kirk Bouchie said. “He served as part of the leadership through six World Series and 29 Ohio Valley Regionals. I'm really pleased that Babe Ruth League Inc. and their board of directors chose to recognize Matt and his accomplishments.

The only thing is, I wish Matt was here with us to receive this honor. He certainly deserves it, though I know if he was here, he'd say it was all the others that made it happen while he was along for the ride. But that certainly wasn't the case.

“Every year we have one of these, we think about the special people who have made Cub League what it is, and there's no question Fred is certainly that,” Bouchie continued. “He's been here almost as long as Matt and I, coaching league teams and postseason. He's recently retired, and he's full-time at the Cub League now, so a lot of what you see out here in terms of facilities is because of Fred's desire to make it better for the kids. It's a special honor, especially this year, throwing to his grandson, Rylan.”

Prior to the Opening Ceremony, in front of a nearly-filled Bilskie Field, the Vincennes 9s appeared to be up the challenge of playing in a 10-year-old tournament.

New Canaan put up three runs on four hits in the first inning, and they tacked on one in the second to go up, 4-0, before the hosts made things interesting.

With one out in the second, Austin Pinkstaff reached on an error, and New Canaan also bobbled the next ground ball to allow Cayden Trueblood to reach safely. Chase Hawkins then hit a ground ball to the first baseman, who didn't field it cleanly, but the pitcher didn't cover the bag, allowing Hawkins on first and the bases loaded.

Following a strikeout, Collin Smith got on with an error, and pinch-runner Jaxon Braun scored. Dakota Walk was next, and he grounded to short, but a miscommunication between the New Canaan middle infielders allowed Smith to slide safely into second. Trueblood scored and Walk picked up the RBI on the fielder's choice.

Justin Wilson then lined one up the middle for what seemed to be a hit, but the center fielder was shallow and got the force out at second to end the frame. Vincennes trailed just, 4-2, but New Canaan struck back with seven runs in the third to seize control. They added two more in the fourth inning to wrap up the game on the 10-run rule.

Walker Jennings was named the Vincennes player of the game, notching a single, and Heath Boger had a pinch-hit single in the fourth for the team's other hit.

“We battled, and we played hard,” Vincennes White coach Rick Potter said. “A couple bounces and a couple close calls didn't go our way, but that's baseball. The best ball we hit ended up being a force out at second. It's a tough game for us, but we'll bounce back.

“(New Canaan) hit the ball around the yard pretty well, and they're a good team. Our pitchers battled. They had good hitters, and we didn't have a lot of walks. That's all we can ask for. We told them to pitch to contact, and we just didn't make some plays behind them.”

J.D. Hiraman and Luke Cannon paced New Canaan, each going 2-for-3 with a double and two RBIs, as the team finished with 13 hits. Smith pitched 2 2/3 innings for Vincennes and Cole Risley pitched 1 1/3 innings.