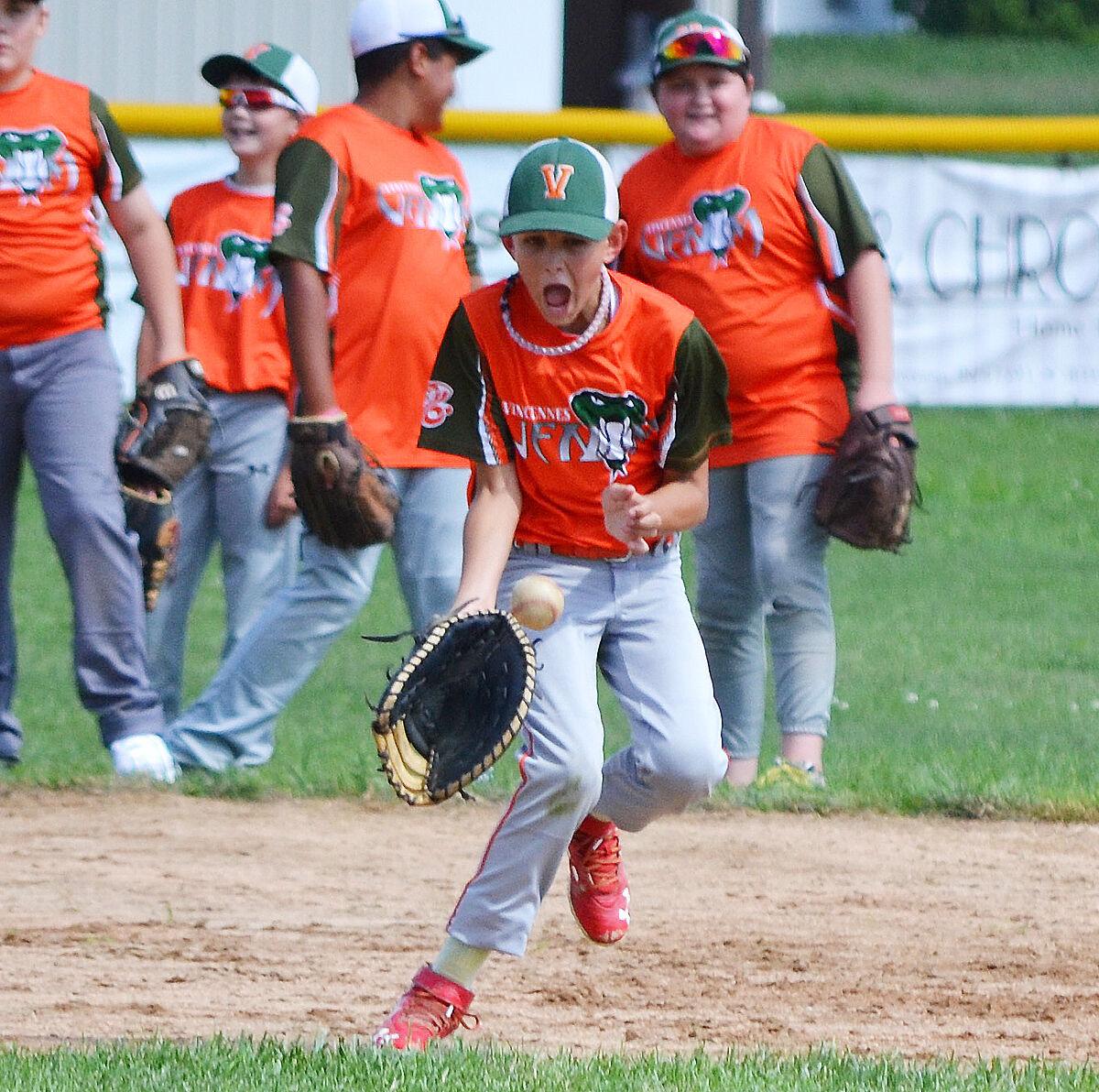 Trevor Smith charges to field a ground ball as teammates await their turn during the Vincennes Venom's practice at St. Vincent's Field Tuesday. The Venom are one of two Vincennes teams competing in the Cal Ripken 10U Indiana State tournament at the Cub League this weekend. 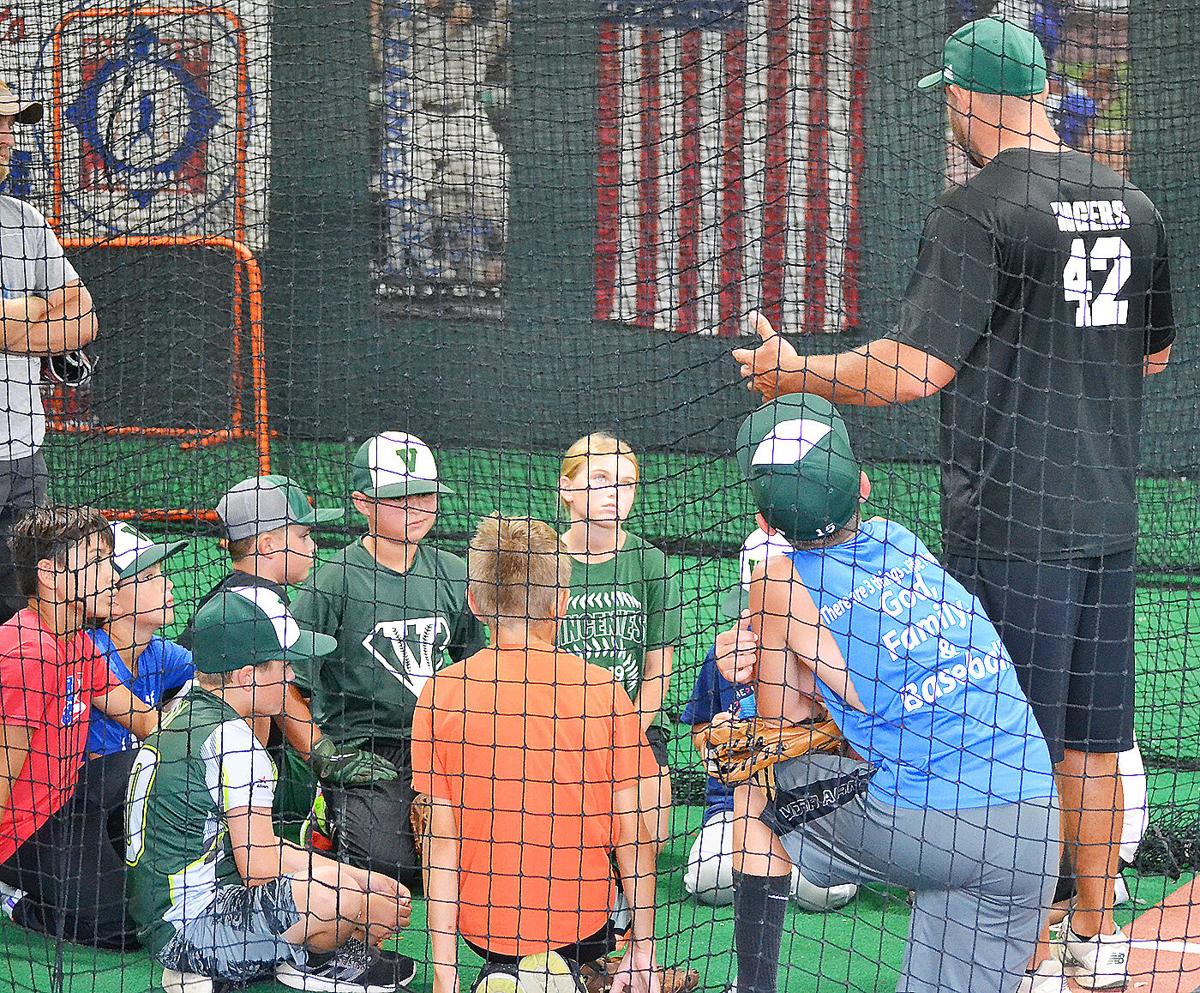 Trevor Smith charges to field a ground ball as teammates await their turn during the Vincennes Venom's practice at St. Vincent's Field Tuesday. The Venom are one of two Vincennes teams competing in the Cal Ripken 10U Indiana State tournament at the Cub League this weekend.

Vincennes has two teams participating, and since the top four teams advance to the Ohio Valley Regional in Lexington, Ky., next week, there's a 50-50 chance a local team will be moving on.

The Vincennes Cub League 10U All-Stars, listed on the schedule as the Vincennes Green, are in the South pool, and the Vincennes Venom, recognized as Vincennes Orange, are in the North pool. But every other team in the tournament is coming from the northern half of the state.

Filling out the South pool are Tipton, Crown Point 2 and Bunker Hill, in Peru. Joining the Venom in the North pool are Crown Point 1, Cicero and South Bend Eastside. Every team plays once Friday and twice Saturday to complete pool play.

The Vincennes Green get things started at Bilskie Field (the green diamond) at 6 p.m. Friday against Tipton, while the Vincennes Venom follow against Crown Point 1 at 8:30 p.m. Games will also be happening simultaneously at Lawson Field (the blue diamond).

The top two teams from each pool not only advance to the semifinals and championship Sunday, but also move on to the Ohio Valley Regional. All three games Sunday are at Bilskie Field.

The Vincennes All-Stars, or “Green,” are coached by Jesse Rogers and have amassed a 19-6 record this summer, winning tournaments in Evansville, at Golfmoor and Deaconess, and another in Franklin.

“This group of kids shows lots of heart. They fight, and the game is never over. They play a full six innings,” Rogers said. “I've been coaching them for a few years. We haven't put a full game together yet (this summer), but we've still had some success. Hopefully this weekend we can put the pitching, hitting and fielding together and make it a successful state tournament.”

The Greens' usual starters around the infield are Braylen Sanders at first base, Caroline Yenne at second, Diesel Rogers at shortstop, Jaxson Newton at third, and Reid Kelso catching. Outfielders are Cole Worland in left, Bennett Davis in center, and Justin Herron in right. Filling out the roster are Caleb Alford, Max Clodfelder, Cooper Neal and Jaxson Wirth, though Wirth is questionable to play this weekend with an illness.

“Pitching is one of our stronger points, and the hitting is getting there, it's coming around,” Rogers said. “We may be without Jaxson Wirth, but we've dealt with hurdles all year, and that's what makes them strong. Yenne is finally back for us (from injury). This will be her first tournament, so we're looking for some success with her in the lineup.

“I've played (at the Cub League) and been around a while, and the only team I'm familiar with is Crown Point. They always seem to come around. But I have every expectation for us to be playing Sunday and advancing to the Ohio Valley.”

The Vincennes Venom are not an official host, as they initially needed to qualify for this weekend's tournament. But with not enough teams to fill out the district tournament, the Venom gained a spot at state and will share some hosting duties.

“We talk all of the time about how these kids are kind of the underdogs. They were kind of the leftovers a couple of years ago,” Venom coach Robbie Smith said. “We have about eight still from our core group. We've had some drop off, but we've added some too, and this year we started a second team for kids who wanted to play more baseball, who want to learn and develop."

Smith started the Venom two years ago when the group was 8 years old. The roster has since expanded to 23, and the Venom have their own green and orange teams. In fact, the second squad is competing this weekend at a tournament in Petersburg.

Twelve are suiting up for the Venom in the Cal Ripken State at Cub League. The infield starters are Trevor Smith at first base, Rylee Fellows at second, Calvin Doggett at shortstop, Memphis McCrary at third and Austin Laue catching. Outfield options are Gavin Riggle, Hayden Lanning, Levi Klingler and Ollie Walters. Wesley Eaton is among the pitching options, and coach Smith noted most of the squad was available to pitch. Outfielders Raymond Sommerville and Zeke Cooper, who can also play second, round out the roster.

The Venom have a 6-2 record this summer, having multiple tournaments rained out.

“These kids show heart. They work hard and they enjoy each other,” Smith said. “We kind of stole IU's (football) mantra of 'Love Each Other.' We talked about it all offseason. We're trying to build their personality and character, and we work on that us much as baseball. They're all bought in, and they care about each other.”

Wyoming Cowboys enjoy return after a September without football in 2020