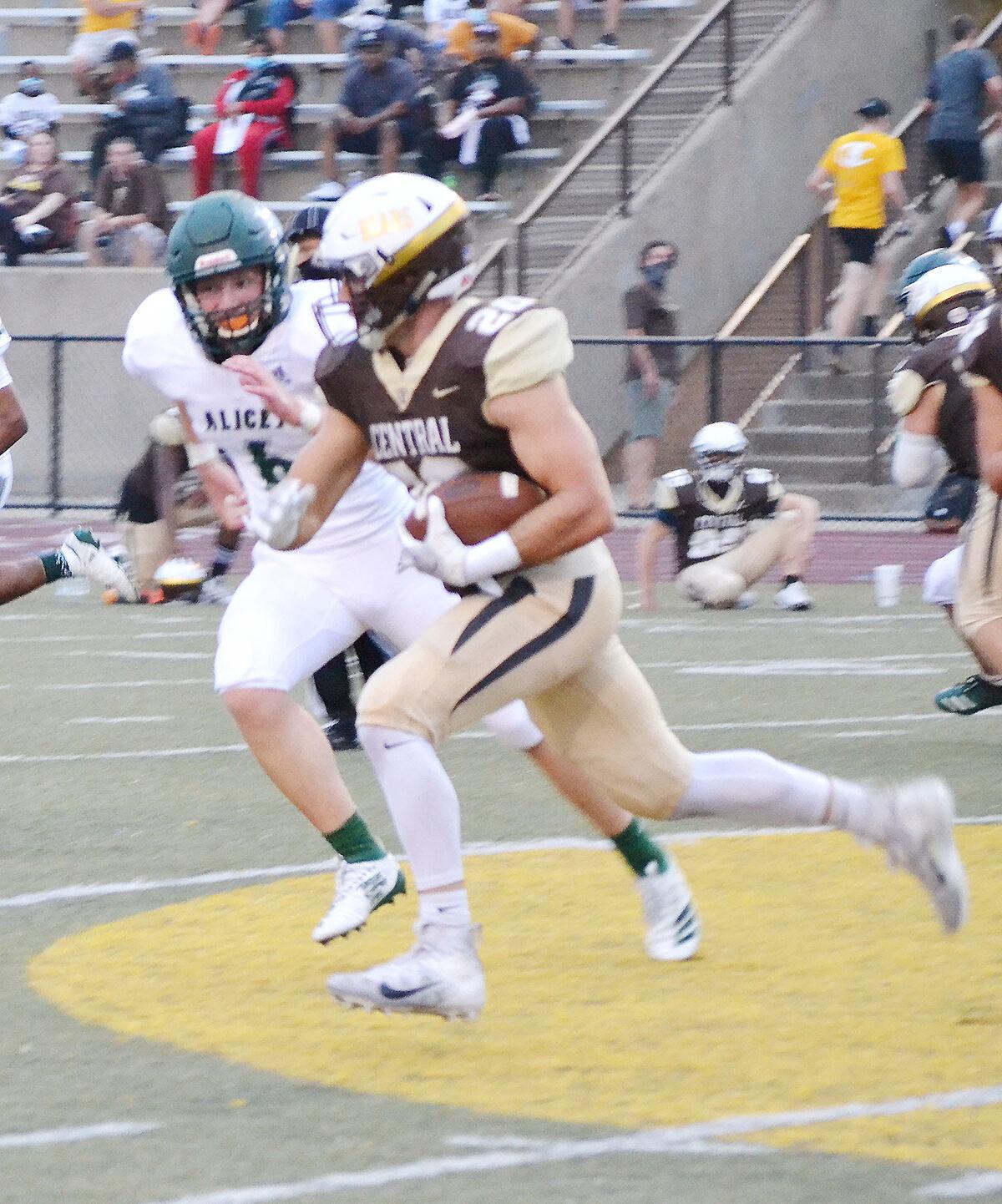 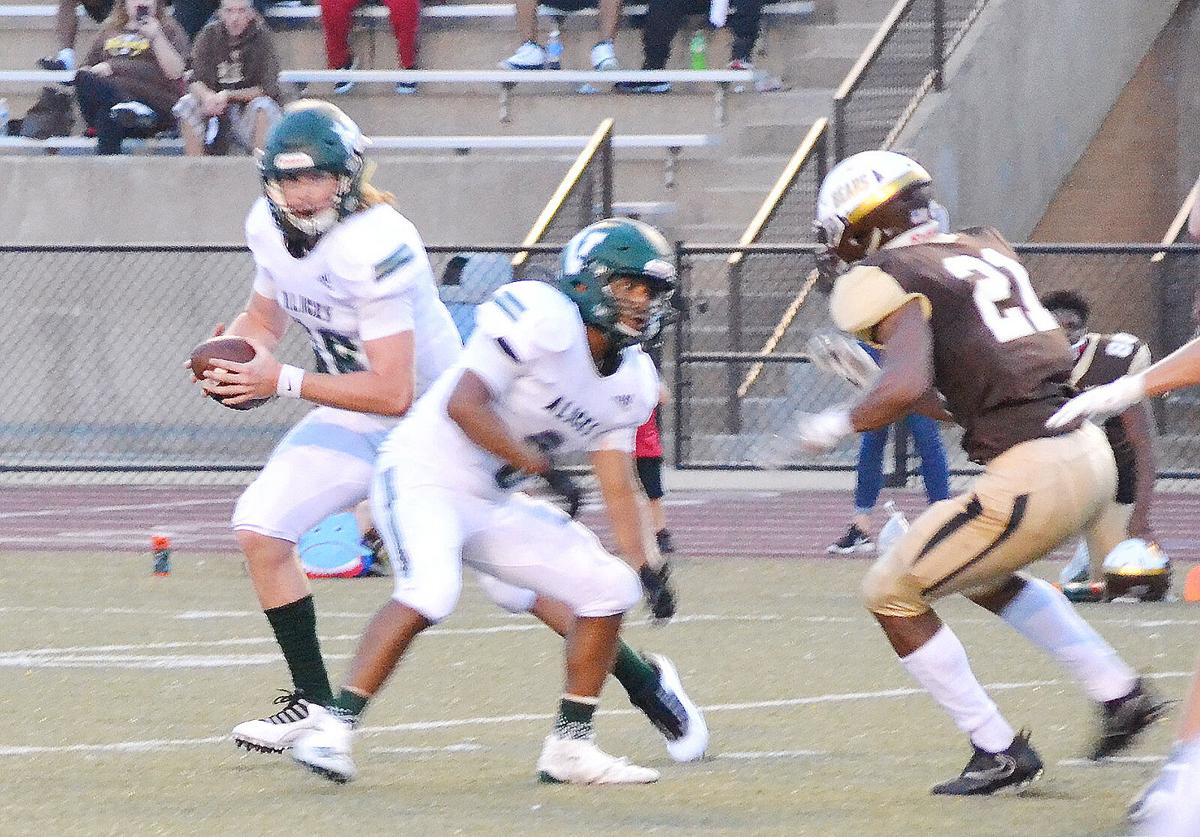 EVANSVILLE — If there was any doubt that Evansville Central was the team to beat in the Southern Indiana Athletic Conference, the Bears eliminated that notion early against Lincoln on Friday.

Class 4A No. 7 Central found the end zone on all four of its first-quarter possessions, and the Bears limited the Alices to 93 yards of offense in a 55-7 SIAC rout at Central Stadium.

Julius Hardiman rushed eight times for 27 yards for Lincoln (1-3), while Eric Vickers was 3-of-13 passing for 71 yards, including a 58-yard touchdown pass to Blake Mincey. Mincey and Jabin Baltzell had interceptions for the defense.

But Lincoln struggled to slow down Central. The Bears (4-0) finished with 426 rushing yards on 41 carries. Jacob Boberg led the way with 129 yards on nine caries, and four others had over 40 yards rushing. Quarterback Blake Herdes was 3-for-6 for 55 yards with two TDs and two interceptions.

“They’re as explosive a team as you’re going to see,” Lincoln coach Levi Salters said. “They have speed, and they have good athletes. But it was pretty discouraging with our effort. That’s not the brand of football we want to put out there.”

Central led 41-7 at halftime, one point shy of earning a running clock with the IHSAA mercy rule. Lincoln received the kickoff to start the second half, and Hardiman fumbled on the first play to give the Bears back possession. In four plays, Central earned the running clock, with Boberg plunging in from 3 yards out to make it 48-7 with 9:40 showing in the third.

Following Lincoln’s next possession, the Bears put together a 16-play drive, aided by a roughing-the-punter penalty on the Alices, and ran off over a quarter of game time before putting in the final score on a Steven Pritchett QB sneak with 3:20 left.

“That’s a good team, and there’s a reason why people say they’re the best team in the SIAC. We saw that tonight,” Salters said. “To compete against a team like that, everyone has to do their job, play their responsibility like they’re taught. We didn’t do that.”

A pair of key Lincoln players, E Smith (ankle) and Quinn Miller (knee), both exited with injuries, but Salters was optimistic neither would miss significant time.

It was first quarter to forget for the Alices. Central racked up 213 yards on 16 plays, including nine first downs, while the Alices were limited to six yards on 11 plays. That advantage helped the Bears to a 27-0 lead

The first series was five plays, all rushing, with Tory Evans finishing it off with a 10-yard score with 10:07 showing.

The next score took eight plays, capped off by a Herdes 5-yard pass to Camdyn Counts with 6:04 left. On the first play of Central’s next possession, which started at Lincoln’s 30, Herdes connected with Julian Johnson for a score with 4:17 showing, but a bad snap on the extra point kept it 20-0.

The Bears needed only two plays on their next scoring drive, with Rojelio Diaz rushing for a 45-yard TD with 1:51 to go, and the 27-0 margin carried into the second period.

The second quarter started much better for Lincoln but ended with about the same result. Vickers found Mincey for a 58-yard scoring strike, and Jonathan Soderling’s kick made it 27-7 with 11:49 left in the half. The Bears quickly got in Alices territory again, but Mincey snagged an interception to give Central its first scoreless possession.

But Lincoln quickly went three-and-out, and the Bears had another two-play scoring drive on their next possession, finished on a 7-yard Javonte Madison run.

Jabin Baltzell intercepted Herdes again following a Lincoln punt, but his return gave the Alices possession at their own one, and a fumble on their first play was recovered in the end zone by Central with 3:10 remaining. The Bears went into half up 41-7.