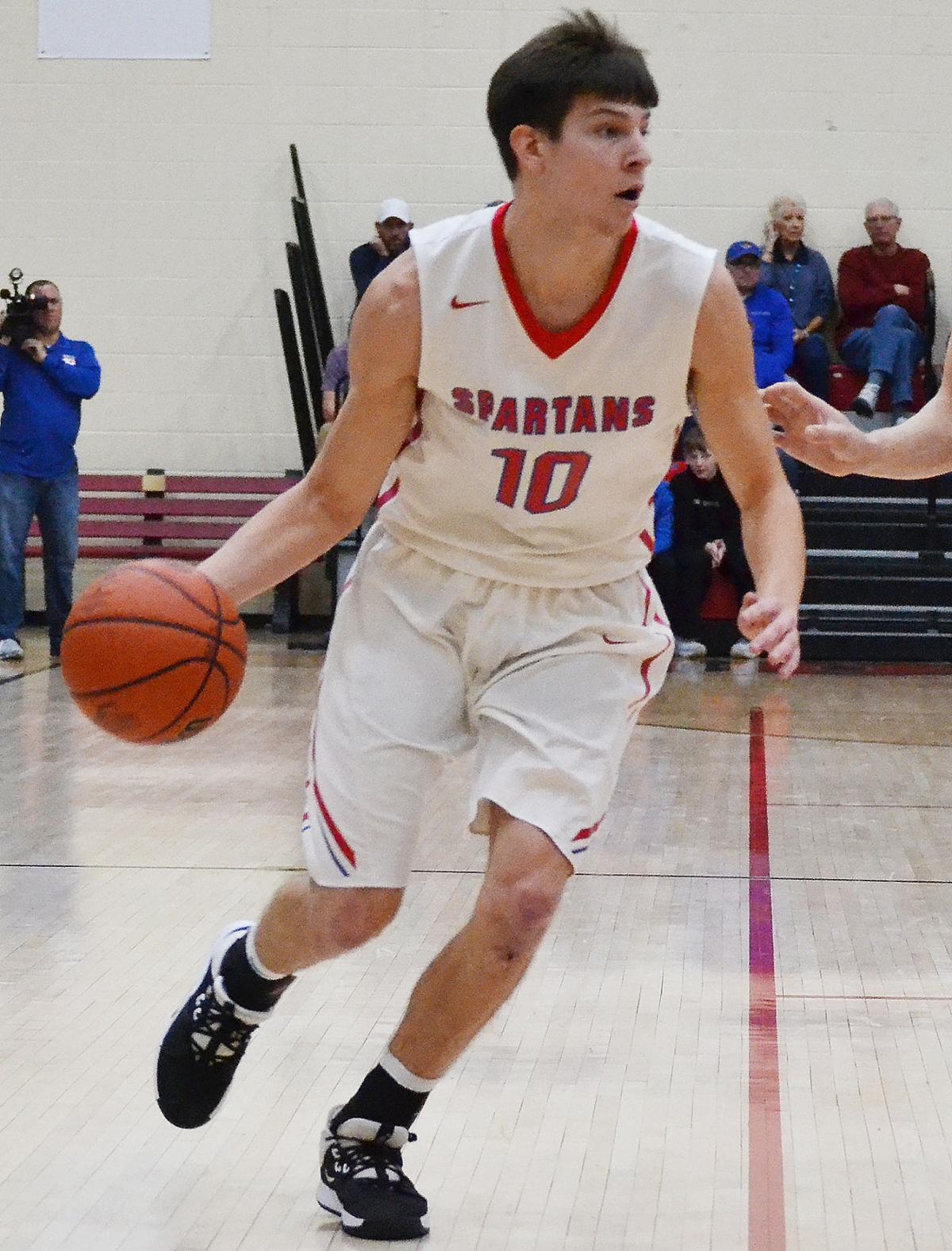 SUN-COMMERCIAL PLAYER OF THE YEAR 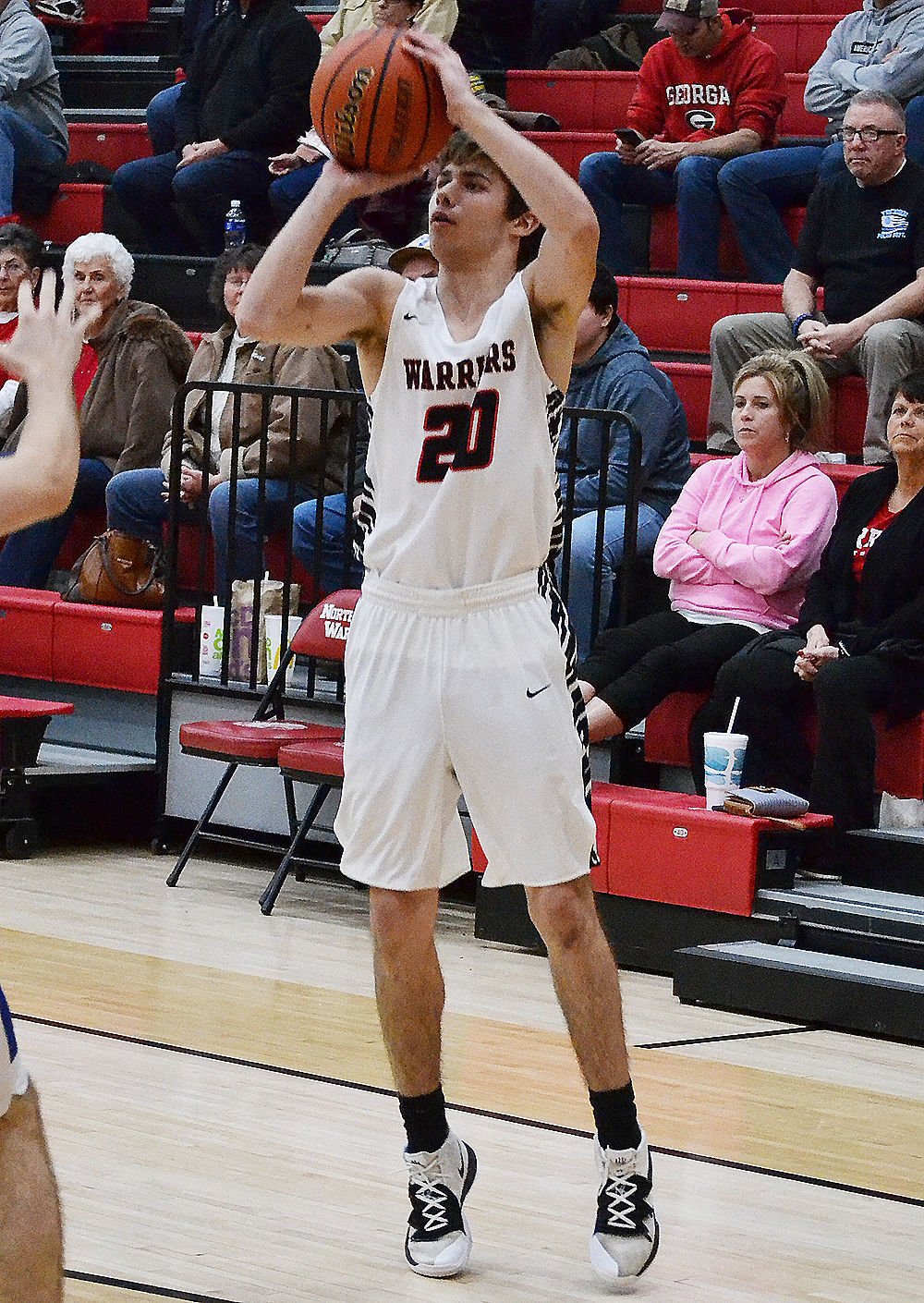 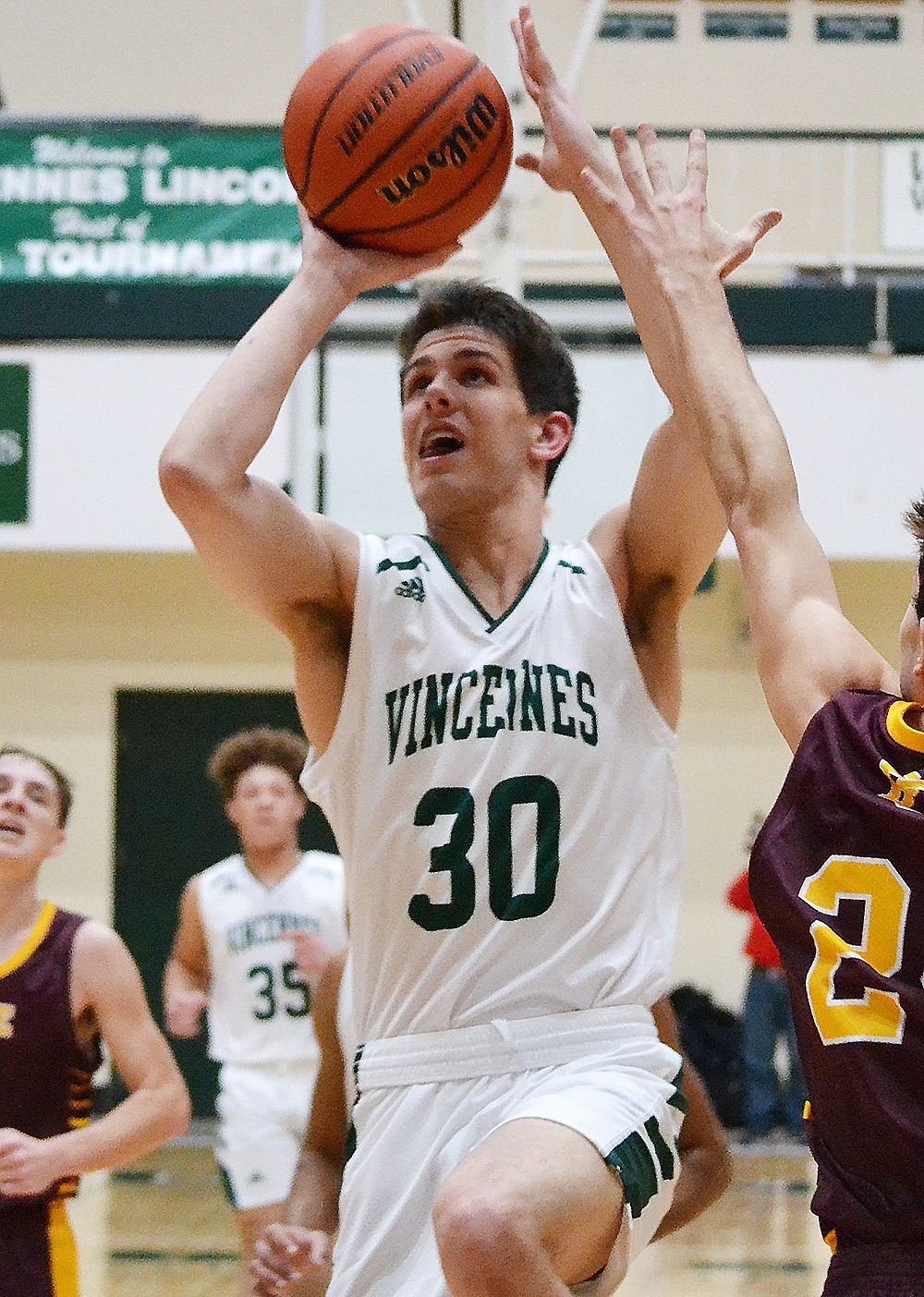 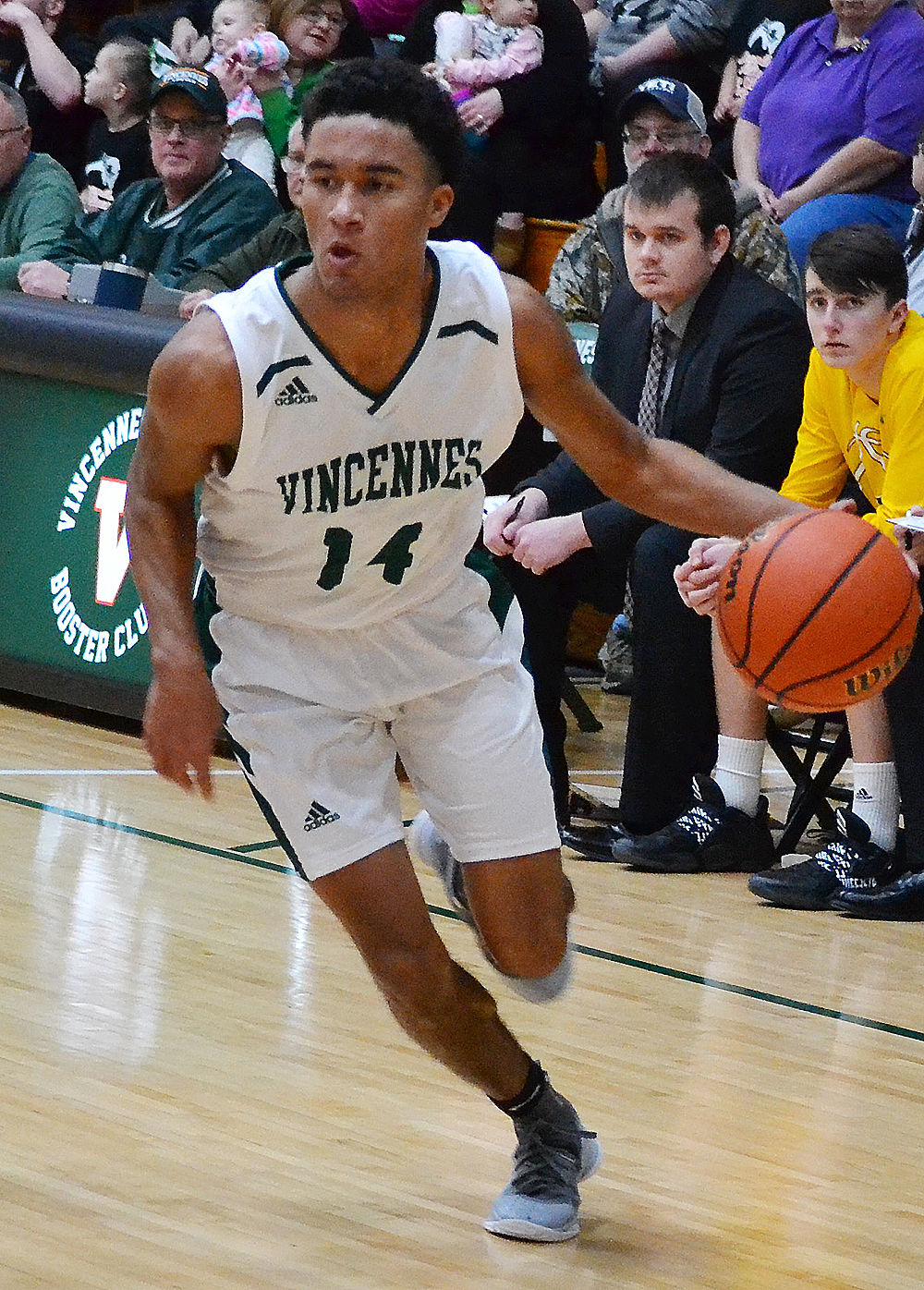 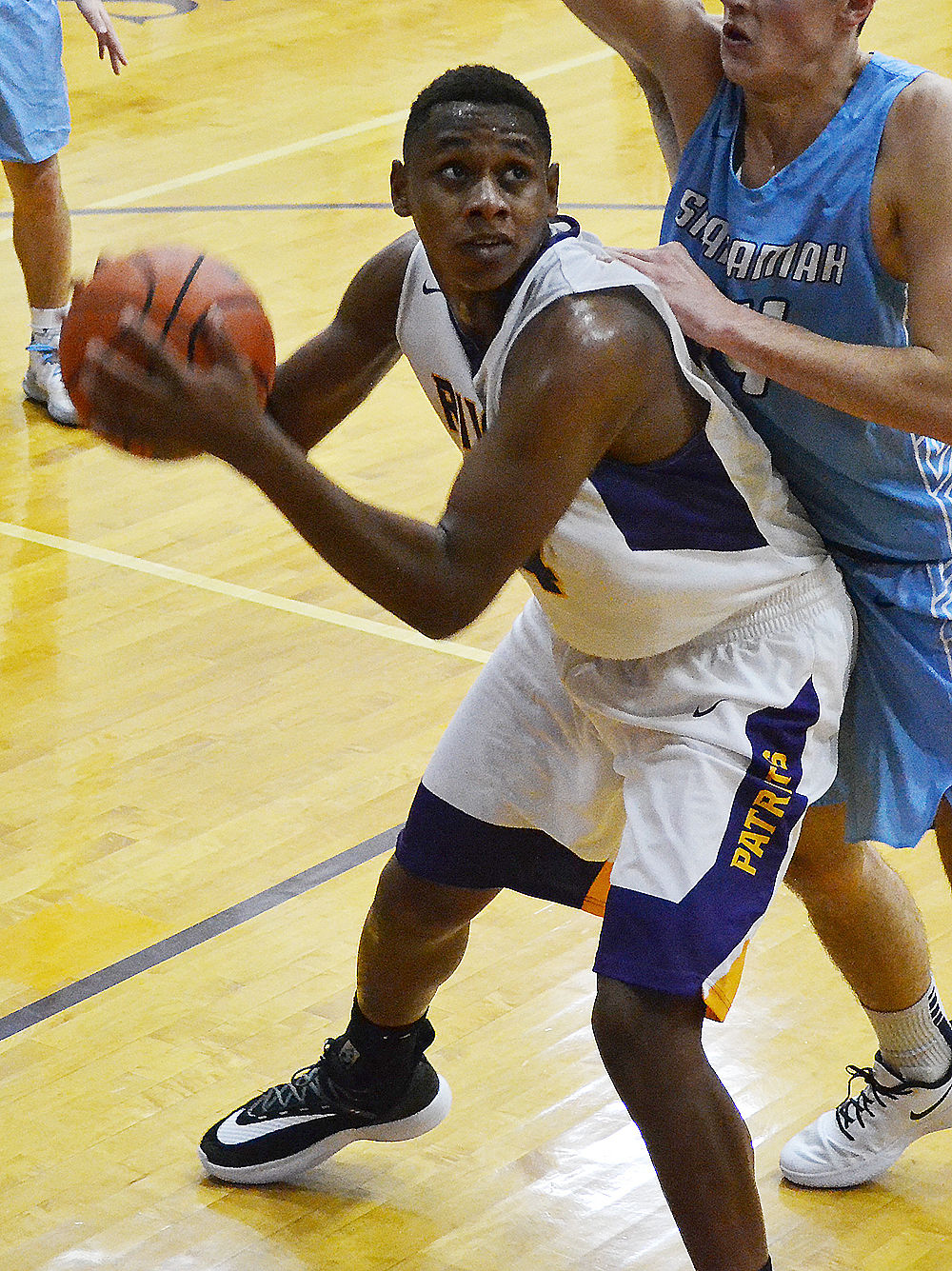 SUN-COMMERCIAL PLAYER OF THE YEAR

Prior to this season only five players in South Knox's over-50 year history have eclipsed 1,000 career points.

Justin Fickling didn't get past any of those five this year, and he needed a late-season flurry to get to the 1,000-point plateau, but if Spartans fans start debating the best player in the school's history, many would argue that Fickling should be a part of the conversation.

“From what (junior varsity coach) Jim (Farris) tells me, he's as good as any South Knox player who's ever played, and Jim's been around South Knox basketball his entire life,” Spartans coach David Burkett said.

Fickling put his stamp on the South Knox program in the team's final regular-season game. The 6-4 senior was still 70 points shy of reaching 1,000 points at that time, and underdog Wood Memorial got within six early in the second half. But Fickling flipped the switch, scoring 24 second-half points to finish with a school-record 42 points as the Spartans rolled to a 59-37 victory.

The record had only stood for five seasons, but prior to that, the single-game scoring mark was last broken in 1980. Fickling was efficient in setting the new record, netting 16-of-19 attempts and 8-of-12 free throws. The big tally also put the senior within striking distance of 1,000 points.

“He probably could have got 50 if his coach left him in the game,” Burkett said. “He's an irreplaceable player. He's got a high motor and he rebounds extremely well. His jump shot has come a long ways.”

Fickling racked up 17 points and 15 rebounds in South Knox's sectional opening win, putting him 11 points shy of 1,000. In the sectional final, Fickling scored just before halftime to get to 1,000, and he blew up for 18 fourth-quarter points to give the Spartans a chance in a 48-45 loss to Linton. Fickling finished with 30 points, his second-best career total, and his 18 points in the final stanza tied a school record for points in a period.

“That sectional game stands out the most. All our kids laid it all on the line and gave everything they had,” Burkett said. “J is a fierce competitor. He wants to win every possession, no matter if we're playing Evansville Reitz or Washington Catholic. He's a very good player, and whoever gets him next year is going to be very fortunate.”

Fickling led the area with 19.1 points per game, and was second with 8.1 rebounds. Over the Spartans final five games, he averaged 26 points and nine rebounds. He was limited under double figures in scoring just once, tallying nine in a low-scoring 39-38 win over Northeast Dubois.

Today Fickling is named the Sun-Commercial Player of the Year.

Fickling's brother, Brandon, was the 2018 Player of the Year, and the Ficklings join an exclusive club, becoming just the third pair of brothers to take the honors in the 36 seasons of the Sun-Commercial all-area team. The other brothers are North Knox's Chris and Eric Sanders (1999, 2003) and Lincoln's David and Jeff Mattingly (2002, 2005). Justin Fickling is the eighth Spartan to be named the boys Player of the Year.

Fickling is the only player among the 10 who are repeat all-area selections. He was picked for the first team last season.

Burkett: “One thing you can't replace with Justin is his toughness. He's going to fight, and at times I had to try to tone down his competitiveness a little bit. He laid it on the line every night. There was no question whether I was going to get effort out of him. I'm not sure people realize how good a rebounder he is. He can just go up and get it. Sometimes (on offense) he'll ball fake and spin, and I'll think, 'what the heck are you doing?', but he'll get it to the rim, and it goes in. He just has a feel. He has good feet inside, and traffic doesn't bother him.”

Coach Jordan Myers: “Ethan was very good down the stretch for us. Averaging almost 20 points and 7 rebounds a game his last seven games, he came into his own and helped us flip the season around. Ethan has an ability to score the basketball in a variety of ways. He also rebounded the ball well for us and gave us good minutes on the defensive end. Going from being on the bottom of the scouting report last year to the top this year, it was a bit of an adjustment for him but he worked through it and had a very good season. I am proud of Ethan and look forward to big things from him next year as well.”

Coach Daniel Crabtree: “Holtman is a gifted athlete who has a knack for putting the ball in the basket. It’s amazing that his field goal percentage is that high (56%) while being the focal point of opposing defenses. There were spurts or quarters this season when we caught a glimpse of how quickly he can put up points. He made at least one 3-pointer in every game this season. He finished with 55 makes, just one shy of tying for second all-time. As he gets older and more experienced, we hope to add a post game to his scoring arsenal. While Holtman is a very good defender, he will need to move into elite status to complete the package. Holtman is a fiery competitor, who has a bright future in our program.”

Myers: “Torrence was one of the better athletes in the area. He gave us a dimension of getting into the paint and collapsing the defense that a lot of other teams had trouble with. He got to the free-throw line a lot and was always putting pressure on people with his ability to get downhill. Especially as we started to flip the year around, he really got better at getting into the paint, finishing and creating for his teammates. Torrence was in an interesting spot being the only senior, but he handled it well. He always played hard and competed. Torrence had a very good senior year and I'm proud of him.”

Coach Mark Bezy: “Tre'von is a perfect example of offseason work. Tre dedicated himself in the offseason to working on his body and his game. He bolstered the load on the offensive and defensive ends for us, playing the most minutes while leading us in offensive and defensive rebounds. Tre'von wanted to step up this year knowing the strong graduating class we had last year, and he more than fulfilled that spot. He's a pleasure on and off the court for me, always willing to listen, be coached up, and he's the hardest worker on the court. He was a huge part of our success the last four years, and it was a pleasure to watch him go out playing his best basketball. His presence will be missed.”

Coach Bryan Havill: “Drake handled the ball quite a bit for us, and he saw our opponent's best defender every night. They tried to shut him down, and that was a drastic change for him that he had to adjust to. He also guarded the other teams' best player. We needed Drake to do a lot for us. If he and Camren weren't scoring, we didn't have much of a chance to stay in games. Last year his goal (offensively) was to get to the basket, and he's still good at doing that, but he had to learn to expand his game. His perimeter game got better, and we hope he continues to improve next year.”

Burkett: “He's one of the smartest players I've been around, and he plays extremely hard as well. He takes a lot of my punishment, because he has to be on the same page as me. If he's not, he hears it, so he has a mental toughness there. The biggest part with him is he needs to stay aggressive going to the basket, but he shot it well for us at times. He can be his own worst enemy because he puts a lot of pressure on himself. He'll have a lot more responsibility next year, having the ball in his hands at all times. He's a good defender, but we want him to become a lockdown type of guy. He's a tough guard, and he started to rebound for us a bit at the end of the year.”

Havill: “Cam is coachable, he and Drake both are, and he improved from the beginning of the year to the end of the year. Cam is kind of crafty stealing the ball, doing it late in games when we needed a steal. I probably didn't see half his steals because I'd be saying something to another coach or player, and I'd turn around and Cam had the ball in his hands. I'd wonder, 'how did he get that?' That's kind of how he operated. He came up with some big plays for us, and he had to score for us. We needed to score in the 50s, and we had to get it from Cam and Drake. He was playing good basketball at the end of the season.”

Bishop: “He was my hardest worker and the MVP of the team. I had several coaches tell me that if they had one player they could pick in our conference, it would be Blayne. Blayne became a tough guard around the basket. Most teams had to double him, which helped other players get open. He was good at the top of the 1-3-1 defense, and a good rebounder. Our seniors never had a winning season, and because of Blayne and the other seniors, they can say they won. Blayne was coachable and respectable, key character traits that coaches crave.”