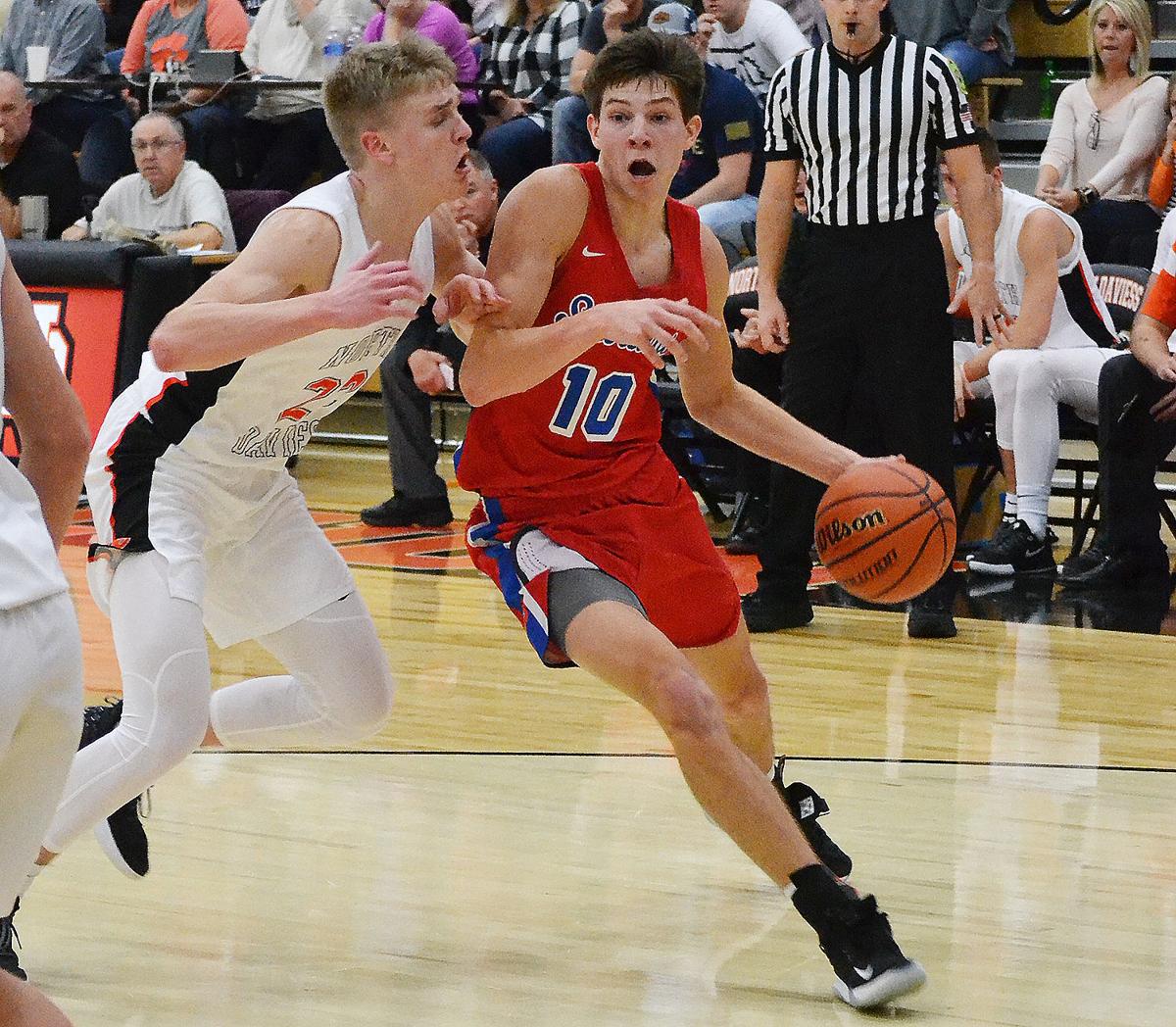 South Knox's Justin Fickling, 10, is the area's leading scorer at the midseason point. His offense combined with a potent team defense has made the Spartans the best in the area. 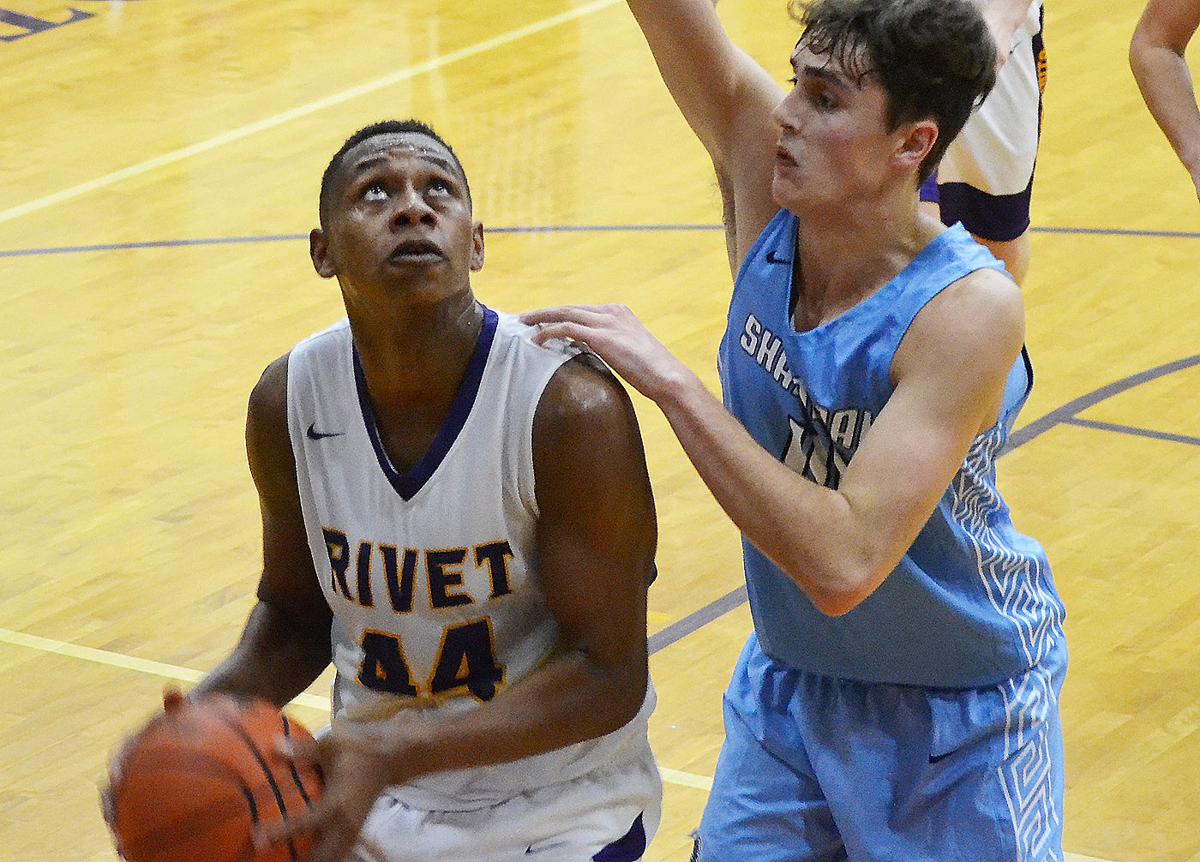 Rivet senior Tre'von Taylor (44) has taken a major leap in scoring this year, adding nearly 12 points per game to his total in anchoring the Patriots' offense. 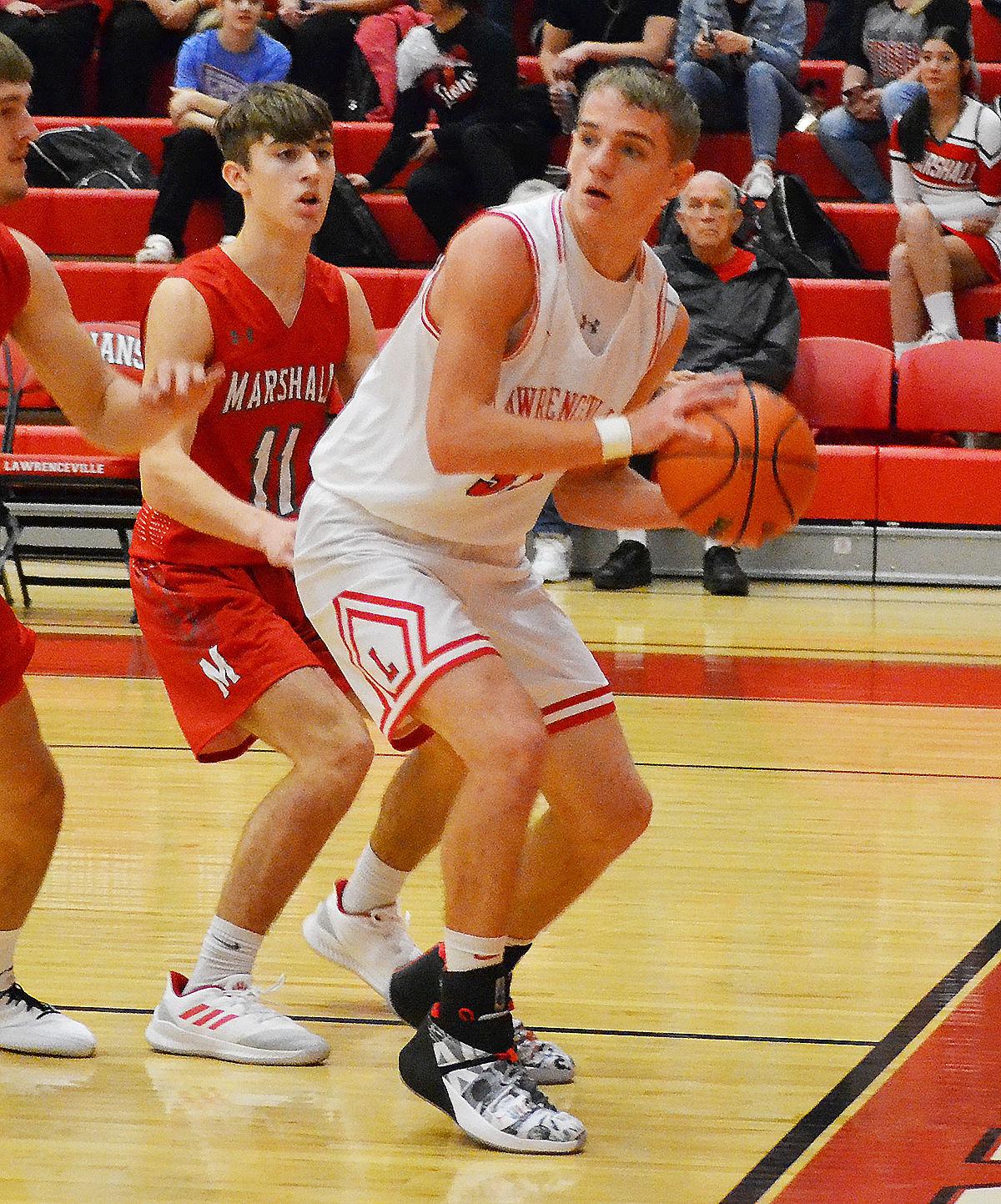 Lawrenceville's Blayne Winningham is one of five seniors who's supplied key contribution for Indians this season, but Winningham's been the most consistent. He leads the team in rebounds, is second and scoring, and third in assists and steals.

South Knox's Justin Fickling, 10, is the area's leading scorer at the midseason point. His offense combined with a potent team defense has made the Spartans the best in the area.

Rivet senior Tre'von Taylor (44) has taken a major leap in scoring this year, adding nearly 12 points per game to his total in anchoring the Patriots' offense.

Lawrenceville's Blayne Winningham is one of five seniors who's supplied key contribution for Indians this season, but Winningham's been the most consistent. He leads the team in rebounds, is second and scoring, and third in assists and steals.

With a collective record of 32-48, it's been far from a banner beginning for the area's teams as they reach the midway point of the boys basketball season, but there's still plenty of reason to be optimistic in the second half.

The significant drop in winning percentage from .513 last season (81-77) to .400 at the halfway mark isn't too surprising. Four of the six area squads graduated at least three starters — including the top six scorers and eight of the top nine in the area — and Lincoln and North Knox have been adjusting to new coaches.

But a source for optimism isn't too difficult to find. Several of the teams have already been through the toughest portions of their schedule, so plenty of opportunities for wins are still ahead. Also, the hits taken from last year's graduation have opened the door for many younger players to gain experience through the rigors of a varsity season, and nearly every area team will be better for it next year, and perhaps even by the end of the season.

Here are some of the teams and players that have been on display throughout the first half.

The Spartans (6-5) were in this same spot a season ago, so even though the record is down from last year's 8-3 mark at this time, it's impressive that South Knox has remained on top despite graduating four starters. One reason the Spartans continue to win is the return of 6-4 senior Justin Fickling, who leads the area at 16.8 points per game, and 5-10 junior Garrett Holscher has blossomed in his role as the starting point guard to average 10.0 points.

But the biggest reason for South Knox's success is its defense. While many trying opponents still await the Spartans this season, they currently have a better defensive scoring average (41.2) than they did during their 18-7 campaign a year ago (43.9) and rank 10th in the state, second in 2A. The number is partly skewed due to South Knox yielding just nine points against Washington Catholic, but even without that game the Spartans would still have a top-30 scoring defense in the state. They've limited four other opponents to 40 or less, including impressive home wins over Northeast Dubois and Princeton over the weekend, and the only foes to eclipse 50 were 4A Bedford North Lawrence and Class A No. 8 Loogootee.

Six-one senior Logan Anthis and 5-11 sophomore Tristian Wirth have been tenacious defenders, and 6-6 senior Walker McCrary and 6-2 sophomore Cody Dawson give the Spartans an inside presence. South Knox has also got a spark from 6-0 sophomore Brennon Robinson (4.0), who's scored at least eight points in half of his eight appearances.

A 5-8 record at the midseason mark may not seem too glossy, but for the Warriors it indicates a big step in the right direction. North Knox had just one win at this time a year ago on its way to a 3-20 finish, and two years ago the Warriors were winless at midseason.

Naturally North Knox has benefitted from the return of the bulk of its roster from a season ago, and 6-0 sophomore Holtman Doades (16.2) has emerged as the team's go-to scorer. Reece Hammelman (8.8), a 6-0 junior, has stepped up his scoring recently, notching double figures twice last weekend against Washington and Sullivan, and 6-0 juniors Brayden Thorne and Isaiah Collins and 6-5 sophomore Ian Kixmiller have all been in double figures at least once.

North Knox's biggest reason for improvement however may be first-year coach Daniel Crabtree, who's emphasis on defense has made the Warriors much better on that end. North Knox surrendered 70.2 points per game a year ago, allowing six teams to score over 80. This season the Warriors let up 52.5 per game. Part of that is due to Crabtree's slower pace, but North Knox's offense is only two points less than last season, so the defense has clearly been much better. The Warriors have also limited five opponents this season under 50 points, a feat they only accomplished once a year ago, and the most points they've allowed is 66, which came in an overtime victory.

A 2-7 start to the season couldn't have been what fans and first-year coach Jordan Myers were hoping for the Alices this season, but the record is a bit deceiving.

While it's true Lincoln's offense has been out of sync, the Alices' schedule, which is always difficult, has made things even more challenging than they'd typically be for a team that said goodbye to four key seniors, including the top two scorers. Based on Jeff Sagarin's computer ratings, nobody in southwestern Indiana has played a tougher schedule through the first half of the season, and few teams around are even close. Through Saturday's games, the Alices' schedule ranked as the 70th most difficult in the state. No one in the Big Eight, Pocket, Blue Chip, Western Indiana or Southwestern Indiana conferences has a schedule ranking tougher than 125th (Heritage Hills). Even compared to teams in the Southern Indiana Athletic Conference, which Lincoln joins next year, none have had a tougher path to this point, though Evansville Harrison and Memorial aren't far behind at 73rd and 76th.

Fans who made the trip Tuesday to Gibson Southern got a glimpse of what Lincoln could become, with 6-3 junior Ethan Bushey erupting for season-bests of 20 points and 15 rebounds in a 64-52 win, the Alices' third of the season. Torrence Gillis, the team's lone senior, leads the way with 12.4 points per game, and a slew of juniors as well as two sophomores in the rotation give Lincoln plenty of hope for the future.

A larger role was expected for Taylor this season as the only returning starter from the Patriots' sectional lineup a season ago, but few could have predicted the 6-3 senior would become one of the premier scorers in the area. He showed some flashes last season, averaging 7.4 over the team's final five games and earning sectional starts after being a reserve the majority of the season. But he's come on even stronger this year to put up over 44 percent of Rivet's offense.

Taylor is averaging 16.7 points, up nearly a full 12 points from his 4.9 average a year ago, and he's just over a rebound per game shy of averaging a double-double with 8.6 boards. Over the last four games, he's scoring 20.8. He notched a career-high 21 points to go with eight rebounds in a comeback win over Cannelton Jan. 3, and he recorded a new career high of 25 the next night in a loss to Class A No. 6 Bloomfield. Most recently Taylor poured in 25 again in a 58-31 defeat of Dugger on Saturday.

The Indians are anchored this season by a strong senior class, with six of them seeing regular minutes every game. But none has been more consistent than Winningham. The 6-3 senior has been limited to a field goal or less three times this season, but even when he's not scoring, Winningham is still an important contributor.

He's still a solid scoring threat though, averaging 10.1 per game, and he's been even better recently, putting up 14.4 points per game over the last five, including a career-high 22 in a nine-point win over Odin, Ill., on Jan. 4. For the Indians, he's best with 6.3 rebounds per game, second with 2.3 assists and third with 1.6 steals.

Plenty of area players are new to varsity basketball this season, but none has made a bigger impact than Hardiman. While technically not new to playing varsity, the 6-2 junior is new to the area, but only on the hardwood. Hardiman endeared himself to Lincoln fans with a stellar football season, and he's continued to produce in basketball.

The Washington transfer is the Alices' second-leading scorer at 9.0 points per game, and he trails only Bushey with 5.4 rebounds per game. Hardiman has also chipped in 1.6 assists and 2.3 steals. His scoring has dipped a bit recently, as Lincoln relies on all five players on the court to score, but an uptick in points seems likely at some point for the high-energy forward.