There are now 148 active cases of the novel coronavirus in Knox County, according to county health officer Dr. Alan Stewart, which is the highest number recorded since the outbreak began in March.

The previous one-day high of active cases, he said, was 103.

The county’s 7-day infection rate also jumped to more than 7%, up from just 3% two weeks ago. The county is also back to listed as yellow on the state dashboard after dropping into blue, the lowest, last week.

The ratings go from blue to yellow to orange and, the most severe, red.

There are also several coronavirus positive patients being treated at Good Samaritan Hospital, Stewart said, but the facility isn’t “overwhelmed just yet.”

Stewart said the ongoing surge isn’t due to a single outbreak in a lone long-term care facility or local business, although there reportedly have been cases at places like community corrections, which is closed through the weekend due to a number of confirmed cases there, as well as the Southwest Regional Youth Village and even KCARC, among others.

Largely, however, the new cases are just “here and there,” Stewart said.

“We have spread in families, two and three at a time,” he said. “We’re moving inside and, it seems, we’re getting careless.”

Daviess County on Thursday, for instance, saw an additional 53 cases.

Vanderburgh County also in the midst of a spike, marked another 146 cases.

“This was predictable,” Stewart said of the local surge in cases. “It started in Evansville, hit Gibson and Pike counties, too. Last week, we were in the blue, but I don’t think we’ll be blue again for quite awhile.

“It’s going to be rough for awhile,” he said.

Knox County remains with 10 COVID-19-related deaths, according to the state dashboard, although there have been more than that, officials say.

There have been at least an additional two COVID-19 deaths recently amongst Knox County residents, but Stewart said those are taking awhile to be reflected at the state level as they wait on the official filing of a death certificate.

There have been a total of 27 deaths at the hospital so far, he said, but few have been local residents.

There have also been deaths in coronavirus-positive patients, but the cause of death isn’t always listed as COVID-19, Stewart said. He cited a recent death in a COVID-19 positive patient at a local long-term care facility, but because the virus wasn’t believed to be a contributing factor to that person’s death, it wasn’t listed on the death certificate therefore won’t show up on the state dashboard.

“If the physician does not put COVID on the death certificate, it will not be recorded as a COVID death,” Stewart said. “And there are cases where that is warranted. The person might be ill due to COVID-19 but is long past having active COVID.” 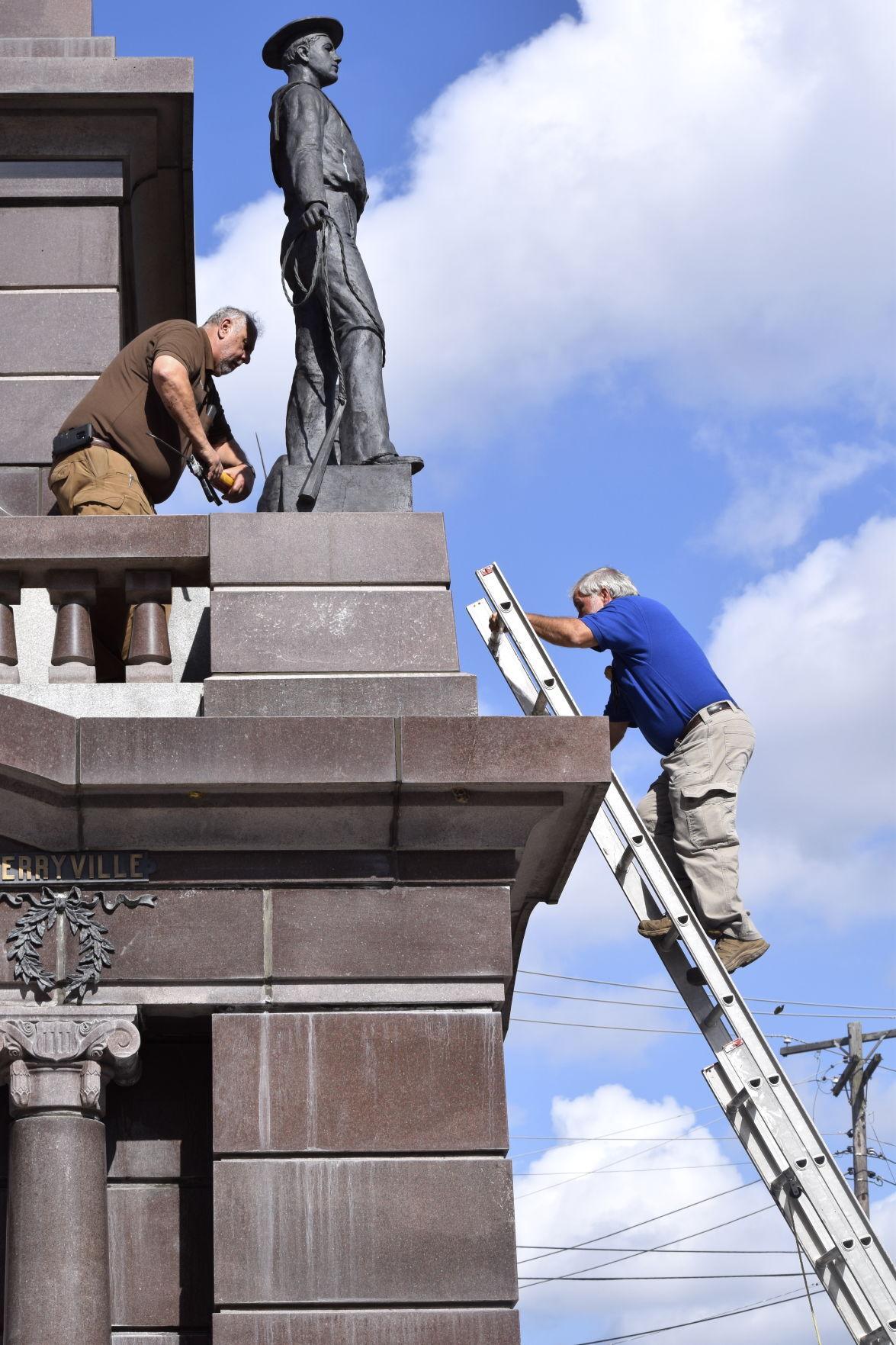 City and county officials — months after initially receiving the funds — are still trying to get rid of mini-grants aimed at helping small businesses deal with the fallout from COVID-19.

Each is gearing up to award a third round of funds, but even then there will likely still be more than $100,000 left on the table.

“Back when we first got this money, we all thought we’d be rid of it pretty quickly,” said county commissioner Trent Hinkle. “But we’ve gotten the word out as much as we can, and if people haven’t applied by now, they’re probably just not interested.”

Vincennes and Knox County in May each received a $250,000 grant from the state Office of Community and Rural Affairs’ revamped Community Development Block Grant Program, money meant for businesses struggling after the COVID-19 shutdown stifled their revenue.

Depending on the number of employees a business has, it can be eligible for anywhere from $2,000 up to $10,000 under the city’s program.

The county set up a slightly different system, one with only two payment tiers; businesses with fewer than 25 employees are eligible for $5,000. Those with more can get $10,000.

Both the city and the county have been working with the Loogootee-based Southern Indiana Development Commission in taking applications and awarding the mini-grants.

Hinkle said the county has about a dozen more applications to consider when a committee meets next week.

But they’re inching ever closer to an income threshold set by state officials.

A rule associated with spending the funds says, collectively, 51% of all employees included in the applications must meet low-to-moderate income guidelines.

“We may be able to fund some of these,” he said of the applications, “but not all. We’ll have to figure that out, play with the numbers, when we meet on Monday.

Cheryl Hacker, assistant to Mayor Joe Yochum, said Vincennes has received another six applications. She expects the Revolving Loan Fund Committee — the organization charged with awarding the mini-grants — to meet to consider them next week.

Officials with SIDC have said both the city and county have options moving forward. They can wait and do a fourth round or they can take the remaining funds and disperse them evenly between the applicants thus far.

The city, too, has talked of increasing the amount each business is eligible for — then retroactively awarding previous applications more money accordingly.

But since they have until May of 2021 to spend the money — and with COVID-19 cases spiking all over the state — Hacker said she is inclined to wait.

“Not knowing what will happen through the winter, I think we should press hold on trying to get the money spent,” she said, “but ultimately that will be up to the committee to decide.”

Businesses can also call City Hall at 812-882-7285 for more information on the city’s process.

Will Drews says the county’s Invasive Species Ordinance, which took affect Jan. 1, has prevented nearly 900 such plants from being sold and planted here in Knox County.

While there is still little more than two months left in the calendar year, local lawn and garden centers, Drews said, are no longer receiving shipments of trees and plants to sell this season, allowing the Invasive Species Board to review its numbers a bit early and get a handle on what kind of impact the legislation had in its first full year.

The ordinance, passed in August of 2018, was the first terrestrial invasive plant regulation in Indiana, preventing the sale, trade and import of more than 60 invasive plant species in the county.

The Invasive Species Board was then created by the county commissioners to handle the enforcement of the ordinance, should local businesses find themselves in repeated non-compliance, which happened only once this year.

Though enforcement of the ordinance did meet some resistance this spring, Drews says he generally saw more cooperation with each passing month during his routine visits to area landscape and home improvement businesses.

“My overall impression is that next year should be fairly easy,” said Drews, the natural resource specialist with Knox County Soil and Water Conservation District.

“Of course we’ll want to look out for violations, but I think next year will go more smoothly.”

This year some of the most common invasive offenders in Knox County, Drews said, included plants such as English Ivy, Burning Bush and Wintercreeper.

And, he added, the greatest obstacle has been the multitude of names given to each individual plant, which can cause confusion in identifying those that are invasive and, therefore, banned.

English Ivy, for example, could be called Pamela’s Ivy or King’s Choice.

For big box stores like Lowe’s and Rural King, which receive the largest shipments of plants in the county, it becomes a challenge to ensure none of the banned plants end up on the sales floor.

“I think plant distribution companies understand there’s a pressure not to sell invasive species, so they’re calling them different names to get around it, which makes it confusing for the salesperson,” Drews said.

Some plant species have been given as many as 20 common names, meaning without a lot of training, lawn and garden managers without horticulture backgrounds could easily miss a plant banned by the ordinance.

“I think they’ve really been trying, but plant growers and distributors keep changing names of the plants, so they’re making it very difficult for garden center managers at places like Lowe’s,” Drews added.

The Invasive Species Board, which isn’t likely to meet again until next year, says the may create some form of online training material in the new year to help bridge the gap in information about invasive plant species.

For more information about the invasive species ordinance or native plants, contact Will Drews at 812-882-8210 or visit http://knoxcountyswcd.com/kccisma/.

The Knox County Commissioners say they still plan to give the Invasive Species Ordinance a second look.

Commissioner Trent Hinkle said during their regular meeting this week that he still plans to draft some minor changes to the ordinance in an effort to make some clarifications.

It will then be up to the commissioners on whether or not to approve a new draft or leave the ordinance as it is.

Hinkle expressed concern this summer that the legislation was, perhaps, overreaching, specifically in that it prohibits local vendors from selling these species to landscape customers living outside Knox County.

Local conservationists, however, have said allowing for these invasive species to be sold in neighboring counties is about the same as planting them right here at home; that’s how aggressively they spread.

Hinkle, a farmer, said he hasn’t had time to draft what changes he will propose. But his intent, he said again on Thursday, is merely to “clarify” or “tidy it up.”

He believes the intent of the original ordinance was not to prohibit the sale of invasive species to customers living outside Knox County.

So, he argues, there really isn’t much to change.

“We just want to make sure that’s clear,” he said.

Hinkle, too, said he would likely suggest additional language to set up specific procedures to follow should a customer from another county request invasive species be used in their landscaping.

“We need a process,” he said. “(The customer) may have to sign an order with their address on it, something like that. And when the plants arrive, they would have to be set off to the side, which you would do anyway with a special order.

“That way, if the inspector shows up, sees the plants and asks about them, there would be paperwork to present.”

Hinkle reiterated that he didn’t want to make sweeping change, only to make it “uniform.”