Michelle Smith, executive director of the Knox County Solid Waste Management District, speaks to members of the city council Monday night regarding a possible raise to the annual rate.

Members of the city council on Monday indicated their support for the Knox County Solid Waste Management District as officials there look to increase user fees for the first time in nearly 20 years.

Michelle Smith, the SWMD’s executive director, encouraged council members to get behind the district’s plan to raise the funds necessary to purchase a new building and expand services.

Though she understands rate increases are often controversial or challenging, Smith asked local leaders to look at the value in SWMD’s services.

“Republic used to take all of our recycling for free,” said Mayor Joe Yochum. “When they stopped, SWMD agreed to pay for that for us. They cover a large portion for us by paying the dumping fees.”

“You and your crew have really helped the City of Vincennes,” he told Smith.

It will be up to the SWMD’s own board of directors to implement the $5 per year increase, but city and county representatives, including city council president Tim Salters, who sits on the SWMD board, said last month that they wanted first to reach out to fellow leaders before voting on a measure that would increase the fee, hence the invitation extended to Smith on Monday.

“In the end, the vote doesn’t come down to the council,” Salters said, “but so long as the (city council members) are behind it, we will throw our support behind you as city representatives.”

Formed in 1991, SWMD was originally funded by tipping fees from the county’s landfill, but after that site closed just a few years later, the district was funded briefly through county dollars.

In 2003, the district moved to a user fees as its sole form of funding, and an annual rate of $15 per parcel of property was added to each individual’s property tax bill.

Though SWMD has managed to stretch every dollar and break even for years, Smith says what the district is now asked to do with limited funding is unsustainable.

“Right now we’re operating on the bare minimum; It’s been 18 years without a review,” said Smith of the user fee, adding that it’s time to inch closer to an annual fee more in line with other counties across the state.

Knox County’s $15 annual SWMD fee is the lowest in the state, sitting at half the rate of Miami County, which is the second-lowest in Indiana at $30 per year.

“So even at this proposed increase you’re still at the bottom — the very bottom?” Salters asked, to which Smith agreed.

An additional $5 per property per year would provide the district more than $70,000 extra dollars annually, which could help immensely, Smith said.

Part of the current financial problem, she explained, is not just that $15 doesn’t stretch as far as it once did, but that the recycling market has drastically changed since the county’s SWMD was formed.

“It used to be free for us to recycle, but now we have to pay to have our materials recycled — residents don’t pay, we have to pay,” she said.

Adding to SWMD’s recycling woes was the closing of Republic Services to the public in January 2020.

“Since then we have taken on a lot more recycling volume,” Smith said.

The extra funds could also help the district expand its services and accessibility to residents.

Ideally, SWMD would purchase a space large enough to accommodate its offices, the Household Hazardous Waste drop and a centralized recycling point.

SWMD doesn’t own any property currently and therefore relies on partnerships with other agencies and organizations to find homes for its recycling centers.

The district currently has a partnership with the Vincennes Street and Sanitation Department at 1600 Bayou St. for its HHW collection site.

In Monroe City, the district uses space outside of the Blue Jean Center, and in Sandborn the recycling trailer is located on city property utilized by the water department.

But there is no centralized access for county residents — a problem that creates a barrier to recycling for some residents and businesses.

The SWMD recently submitted a bid on the former Anthis Heating and Cooling building, located next to the Moose Lodge on South 17th Street, but without the proposed fee increase, the board isn’t comfortable moving forward with the purchase. 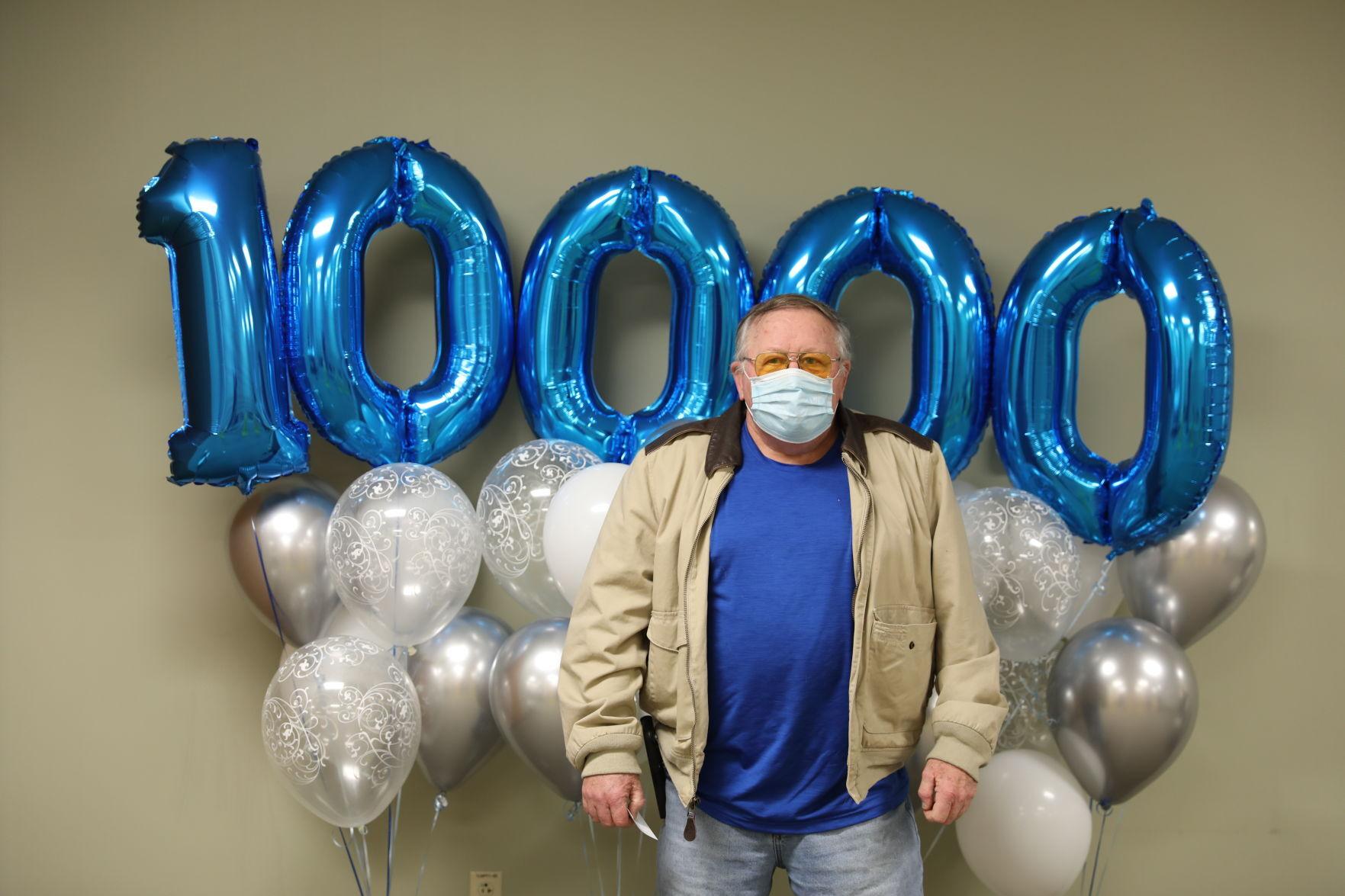 Good Samaritan administered its 10,000th dose of the Pfizer COVID-19 vaccine Monday afternoon to 74-year-old Joe Hale of Sullivan, who was there for his first dose of the vaccine. Hale and his wife, Judith, booked appointments for the vaccine together. She was number 9,999. The Good Samaritan vaccine clinic is administering around 350 vaccines per day, six days a week. Current Indiana vaccine eligibility includes those 65 years of age and older, healthcare workers, first responders and those who handle COVID-19 infectious material. To learn more or to register for the vaccine, visit ourshot.in.gov or call 211.

Members of the city’s Board of Works on Monday handled a bit of important road business.

Board members signed a new contract with Vincennes’ RQAW related to an anticipated overhaul of Washington Avenue, one set to begin in 2022.

The contract, explained Mayor Joe Yochum, is for the start of what will be much right-of-way acquisition along that corridor and was for an amount not to exceed $182,385.

It’s in addition to a contact awarded in 2019 to Indianapolis-based United Consulting for the design of a Washington Avenue facelift, specifically from Emison Avenue near the Washington Christian Center north to Belle Crossing, which includes the area around Gregg Park.

City officials first announced two years ago that they’d been successful in securing a $5.7 million state grant to pay for the long-awaited reconstruction.

Combined with a 20% match from the city itself — or about $1.3 million — the project will result in a nearly $7 million improvement.

City council members have also actively met with residents living in the nearby historic Burnett Heights area to address safety concerns, specifically ones about crossing into nearby Gregg Park.

Board members also on Monday signed a change order that allows for an extension to Bicknell’s Kern’s Excavating for an infrastructure project happening on and around Forbes Road.

In 2019, the city received about $430,000 in state Community Crossings Matching Grant funds to do a reconstruction of Forbes Road as well as three other streets in that neighborhood. The city’s Utilities Service Board, too, chipped in another $660,000 to redo the storm water drainage there as that area, one nearest to Benjamin Franklin Elementary School, is prone to flooding.

The water lines have been installed, but crews got a late start due to COVID-19.

Per the original contract, the entire project was supposed to be finished by the end of this month; the change order extends that out to May.

“By the time everything was done and the roads could be paved, the asphalt plants were closed,” the mayor said. “This gives them time to reopen.

“And I doubt it will take until May.”

In other BOW business, board members signed a new contract with the alliance group that runs the Farmers Market of Historic Vincennes each year.

The contract allows vendors to use the Riverfront Pavilion at Second and Busseron streets every Saturday morning from May through the end of the year for $250 per month.

The market is expected to open, per usual, on Memorial Day weekend.

Lemons now brings the fire department, Bobe said, to a full-staff of 38 firefighters.

The number of new cases of COVID-19 in Knox County continues its downward trend.

But local residents took note this weekend of a very dramatic increase in the COVID-19 death toll.

“The numbers we’ve been seeing were not accurate,” said county health officer Dr. Alan Stewart, “so (the state) went back and found more people whose death could have been contributed to COVID-19.”

State health officer Dr. Kristina Box blamed the undercount of COVID-19 deaths on the speed in which they had to be tracked.

“Never before have local and state departments of health had to present data in real time before it was fully vetted,” Box said last week.

“I know a lot of people were confused about that,” he said. “But we weren’t the only county to see an increase.

“Basically all counties in Indiana saw that same kind of increase.”

Stewart said the cause of death on death certificates can often be vague, and in light of the confusion and chaos surrounding COVID-19, it’s no wonder so many deaths, at least initially, weren’t contributed to COVID-19.

Stewart has been warning or months that the death toll was actually higher than what the state was actually reporting.

There were instances, he said, of people dying outside the common 10-12 day infectious window of COVID-19; one person in particular, he said, passed away about a month after initially being diagnosed with COVID-19, and it was unlikely the death certificate listed it as a cause.

During the audit, however, it’s possible those instances were changed to better reflect the actual number of Hoosiers who died as a result of their COVID-19 infection.

“Somehow the state just needed to do a bit of catching up.”

The overall COVID-19 condition in Knox County is, however, improving.

There were just two new cases reported on Monday; most days, the daily new confirmed caseload is in the single-digits.

The infection rate dropped Monday to just 5%, the lowest it’s been since the summer.

And the number of active cases has dropped below 100, now to 84, Stewart said. Knox County remains in the yellow, or the second-to-least severe category on the state’s color-coded COVID-19 dashboard.

Vaccination efforts, too, are moving along full-steam ahead, especially at Good Samaritan; officials there on Monday celebrated the 10,000th dose given to a 74-year-old Sullivan resident.

The Knox County Health Department’s Clinic, located at Community United Methodist Church on Hart Street Road, is struggling just a bit, however, as the Moderna vaccine is proving a bit harder to come by.

The clinic is getting about 400 doses per week, compared to the 1,000 Pfizer vaccines per week being distributed to Good Samaritan.

The health department clinic can only distribute Moderna as it does not require ultra-cold storage.

With people returning this week for their second doses, Betty Lankford, the county clinic’s coordinator and COVID-19 nurse, said it’s very possible they will have to discontinue any first doses of the vaccine for the entire month of March to ensure they have enough for those vital second doses.

“If we can’t make our numbers work, we’ll have to cancel patients with appointments for those first shots and re-schedule them for April,” Lankford said.

Currently, vaccines — whether they be Pfizer or Moderna — are only open to Hoosiers aged 65 or older, first-responders and healthcare workers.

But local pharmacies, Stewart said, are expected to begin distributing vaccines later this month as well under a federal distribution program.

Johnson & Johnson, too, is expected to have a vaccine hit the market this spring. It only requires one dose, which will greatly simplifying logistics for local health departments and clinics struggling to get shots in arms.

What’s more, its vaccine can stay stable in a refrigerator for months, whereas the other two have to be frozen.

That said, officials with Johnson & Johnson have said they’re experiencing delays in manufacturing, and they’re unsure when they’ll be able to deliver on promises made of millions of doses delivered to clinics by springtime.

Either way, Indiana continues to lead the country in terms of vaccinations given, and Knox County remains in the No. 1 position in terms of the number of Hoosiers vaccinated, per capita.

“Our totals continue to bounce around,” he said, “but they are generally declining. Our positivity rate is down.

“Things are improving,” he said.