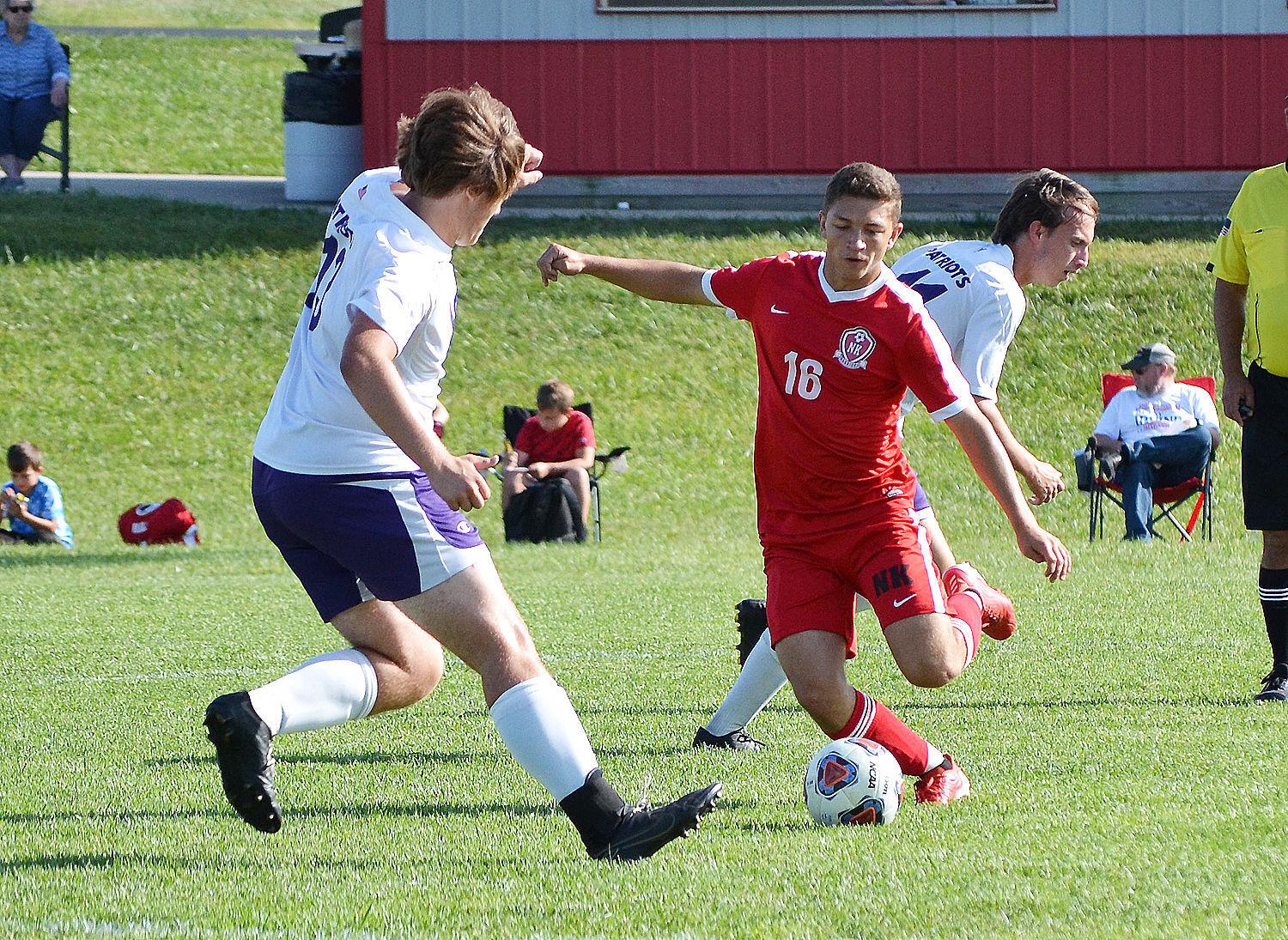 North Knox's Ian Frederick (16) attempts to send a pass upfield as Rivet's Curtis Shake moves in to block it on Tuesday at the Warriors' pitch.

As the county commissioners sat down with members of the county council Tuesday to begin hashing out a spending plan for 2023, conversations drifted first to a topic about which the two entities clashed two years ago.

The commissioners have long told the county council of the need to hire someone to oversee human resources-related issues, first bringing up the idea of hiring a full-time HR person during the budget sessions in 2020.

Under the current system, HR responsibilities are not funneled to one office, instead, the auditors office doing some — things like payroll, the filling out of appropriate tax forms, and onboarding employees — while the commissioners themselves handle complaints from employees, usually sending those to county attorney Andrew Porter even though his contract specifically excludes such inquiries.

“It’s just easier to handle those sometimes on the front end than on the back end with a tort claim,” he said to the group as they met at the Community Corrections building downtown on the second full day of budget hearings.

The commissioners’ request is largely the same as it was two years ago, the hiring of an HR person with an annual salary of $35,000 per year.

The structure, however, is different.

This HR person would make up the county’s “Legal Department,” Porter explained to the county, and would report directly to him.

Doing so would “streamline” HR-related tasks, Porter said, funneling them all — everything from payroll to benefit coordination, the termination of employees, complaints of harassment, new hires and all handbook requirements, among other duties — to the Legal Department, which would then look to him, when necessary, for further legal guidance.

The HR employee, commission president Kellie Streeter explained, would “handle the very diverse issues faced by a typical Human Resources department” and would allow (Porter) to focus his efforts elsewhere.

“We must standardize the process of what we do,” Streeter said. “Right now, we just willy nilly it, if you want to know the truth.

“We can’t even get drug testing off the ground because we don’t have the personnel to do it,” she said.

Too, Streeter said the county would likely save upwards of $10,000 per year by ending the duplication of services, specifically in the termination of contracts like one with a third-party law firm, which handles the development and upkeep of the county’s employee handbook.

Such tasks, she said, would either be taken on by the HR employee or by Porter — either way, handled by the new Legal Department.

“And if we don’t like it, we can change it in years forward,” she said.

Porter expressed his support for the move, saying that with in excess now of 300 employees, the county simply must do better.

Not having a designated place for employees to go to discuss such issues — private issues — is legal trouble waiting to happen, he suggested.

“There is no private office to report private information; it’s problematic,” he said. “So it’s an area we need to address, one we need to modernize.”

Councilman Bob Lechner, however, said he was opposed to the idea, believing it will create even more problems.

With some duties, like payroll, staying with the auditors office — and others shifting to the newly-formed Legal Department — Lechner envisioned a potentially cumbersome situation, one wherein there could be confusion as to who does what, and who reports to whom.

“This will create overlap. Somebody will have two things to do at the same time, and it will be perceived by county employees as an auditor function, but someone wearing two hats,” he said. “It’s not ideal. It’s not seamless; in fact, I think you’ll see a lot of jagged seams. I think we’ll see less credibility and more issues.

“I’ve never seen it done like we’re talking about here,” he said, pounding his fingers on the stack of white papers that made up the commissioners’ proposal.

“That’s not going to happen. We’ve heard that all day,” he said, referencing the steady stream of department heads commiserating about how difficult it is to find people to work when pay is so low.

“We pay you. You provide the services,” he said. “We outsource it to you guys.”

Porter didn’t immediately object, but he did indicate he thought Lechner was potentially overcomplicating the situation; he thought it perfectly feasible that the new Legal Department/HR person would work well with the auditors office in juggling responsibilities from both, thereby accomplishing the task of streamlining the process for employees and potentially alleviating responsibilities from both offices, too.

There is already much, healthy communication between the two offices now, Porter said.

“I never envisioned separate rooms, with no communication,” Porter said.

Before discussions rather abruptly ended — to make way for the council’s regular business meeting Tuesday evening — Streeter again made her plea for help.

There will be a new county auditor in 2023, following this year’s Mid-Term Election, so what better time to implement change?

“We just need to effectively, professionally and correctly (handle HR issues),” she told the council.

“And we thought this a good time to address it.”

Motorists driving by the Fortnightly Clubhouse, 421 N. Sixth St., Tuesday afternoon may have thought the place on fire — or under siege.

Firetrucks and police cars filled the parking lot and the blocks surrounding the historic building — but not for any emergency.

They were there simply to receive a token of gratitude from members of the local Rotary Club and Vincennes Cub League.

“Most first responders are not in it to get recognition or to get rich, not by any means,” said Tim Smith, chief of the Vincennes Township Fire Department, as he made his way inside the Fortnightly, the smell of hamburgers on the grill filling the cool, late summer air. “But the mere act of someone saying, ‘Thank you,’ and recognizing their efforts, that’s what they really appreciate.”

Rotarians four years ago partnered with the Vincennes Cub League in extending a gesture to local first-responders. Amid a national movement to offer a greater sense of appreciation, they opted to host for them a simple lunch, grilling out hot dogs and hamburgers, a side of chips and a cookie, too.

Response has been great, said Rotarian Jim Gislason as he greeted firefighters and police officers as they arrived; on Tuesday, they welcomed nearly 50, taking an additional ten meals out to the Knox County Jail, too.

It’s a simple meal, but it’s an easy way for them to offer a much-deserved thank you, Gislason said.

“Everybody is so appreciative, and sometimes they sneak and extra cookie,” he said with a chuckle.

Inside, uniformed police officers and firefighters — as well as members of both the local Rotary and Vincennes Cub League — sat at tables in fellowship, enjoying a good meal.

“This shows appreciation to all the first responders in the county that give of their time — some of them are paid, some are just volunteers — and serve the community,” Smith said. “We know people are grateful, and this is a good showing of that gratefulness.

And that’s all local Rotarians are trying to do, Gislason said.

“These people serve us day in and day out in our worst-case scenarios, fires, accidents, all kinds of things,” he said, the din of the first responders visiting in the background.

With new, omicron-specific boosters on hand, the Knox County Health Department says they are once again seeing a steady flow of residents rolling up their sleeves.

The stream of residents taking the new vaccine brings renewed hope that the county’s continued surge of cases may finally begin to wane.

“Our numbers are way up there,” said Knox County Health Officer Dr. Alan Stewart. “We have seven patients in the hospital right now.”

For nearly three consecutive months, Knox County has been rated as “severe” on the state’s dashboard ranking and currently has a case count of 531.

Early this month, after receiving a shipment of 500 Moderna COVID-19 bivalent doses, health officials say the county’s allotment of Pfizer-BioNTec also rolled in.

Just two weeks ago the U.S Food and Drug Administration approved emergency use authorization of the new Moderna and Pfizer bivalent vaccines — an updated booster shot meant to protect against both the original strain of the virus as well as the highly contagious BA.4 and BA.5 omicron strains.

“This is a booster, which means you need to have had your first two shots before you can get this booster,” said county health officer Dr. Alan Stewart.

The new single-shot boosters are available to all teens and adults who received their primary vaccines or last booster dose at least two months ago.

Moderna is approved for anyone 18 years of age or older; a Pfizer booster is available to those 12 years of age and older.

Though nearly all previously vaccinated adults are eligible for the new shot, Lankford says the health department has primarily been seeing residents over age 60 coming in to be boosted.

Stewart says getting the county’s older population protected from the omicron sub variants BA.4 and BA.5 is incredibly important.

“Of the seven people in the hospital with COVID right now, the youngest person is 75, so it’s really hitting the elderly,” he said, noting that none of the hospitalized individuals are considered fully vaccinated.

“The best way to be protected now is by getting the new bivalent vaccine,” Stewart said.

Stewart and Lankford also say that a number of people are coming into the local health department from surrounding counties in order to access the new modified boosters.

Lankford, on Tuesday, said she had just met with someone from Daviess County who said they couldn’t get the new shot anywhere in their home county.

“We’re hearing that several counties aren’t carrying it, and we have many people calling to see if we have it,” she said.

Stewart, shocked that some neighboring counties have seemingly not ordered shipments of the newly available boosters, says it’s almost unbelievable.

“For us, this was a no-brainer — these vaccines are the next step forward,” he said plainly, noting that these are currently the only formulas designed to fight against omicron.

“The first vaccine was good initially at preventing infections and then continued to mitigate subsequent infections that would make the virus less severe.

“This booster should still decrease the severity of illness if infected, but it should also help prevent getting COVID again at all,” said Stewart.

The health officer says, though no definitive information has yet been released about side effects of the bivalent boosters, he expects them to be similar to those of previous COVID-19 vaccines.

“We’re assuming the side effects are similar, and they should be,” he said, pointing to the method of creating the mRNA boosters and the way they stimulate the immune response. “So if people get a little soreness in their arm or shoulder, low grade fever, that’s to be expected.”

Click and hold your mouse button on the page to select the area you wish to save or print. You can click and drag the clipping box to move it or click and drag in the bottom right corner to resize it. When you're happy with your selection, click the checkmark icon next to the clipping area to continue.