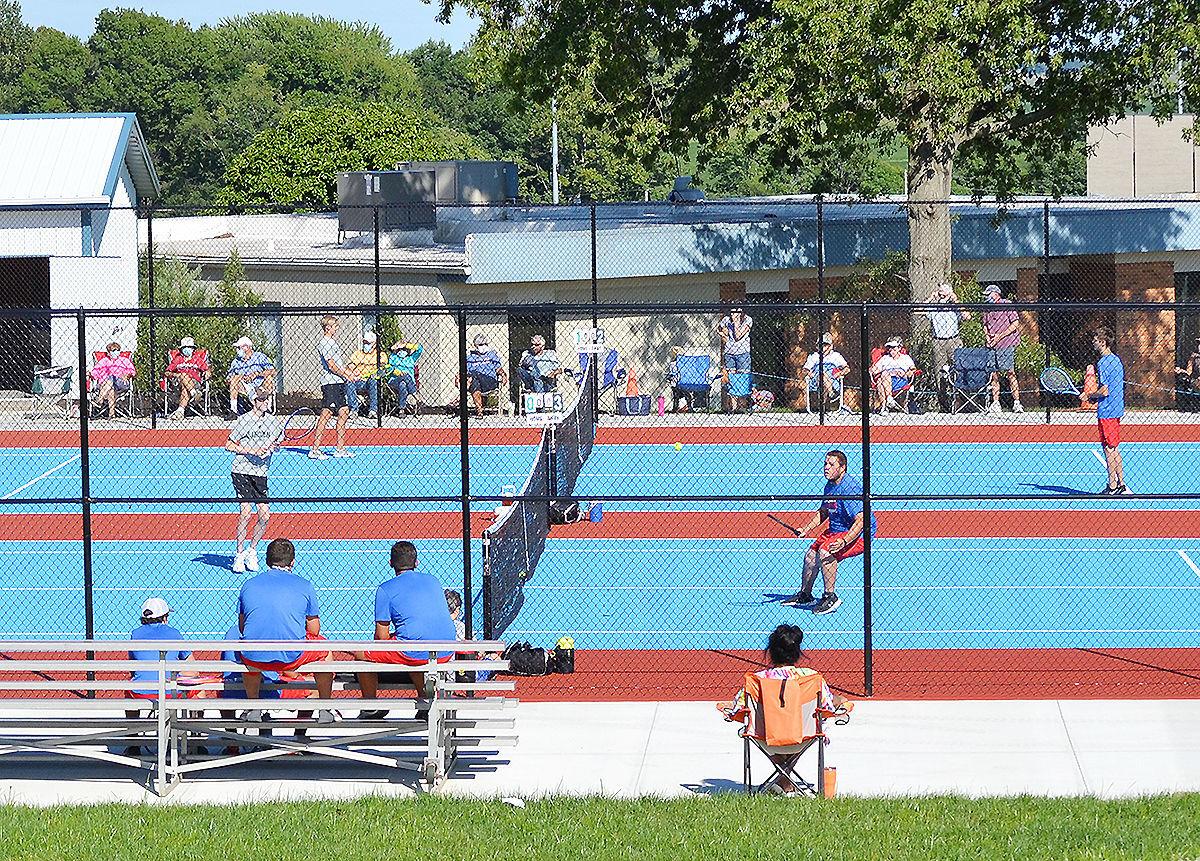 The Knox County Commissioners have granted county resource specialist Will Drews his desired appointment to an open seat on the Invasive Species Board.

But they still plan to take back up the legislation to see if it shouldn’t be tweaked a bit.

The commissioners on Tuesday agreed to appoint Denise Eagle to the board, granting a request Drews made two weeks ago.

Initially, the commissioners, specifically Trent Hinkle, wanted time to think the appointment over; he was in talks with members of the city council, who have expressed interest in having their own appointment to the Invasive Species Board.

Hinkle said, after speaking at length with city council president Tim Salters, that he thought it best to go ahead and grant Drews’ request; that seat has been open since January, he pointed out.

“But whenever one of those other positions expires at the end of this year, I said we could possibly look at giving the city a seat at the table,” Hinkle said.

“There were no promises made,” he added, “but that was the conversation.”

Salters said acquiring a seat on the Invasive Species Board has been on their minds for quite some time.

The legislation prohibits the sale of 64 species of invasive grasses, trees, plants and shrubs.

And while the board, which oversees the enforcement of the ordinance, has had some local businesses be reluctant to comply, they’ve not yet issued any fines.

Some business owners, however, have expressed frustration that they can’t sell invasive species to customers living outside Knox County, which is why Hinkle wants to take a second look at the legislation.

“I think the biggest reason the city would like a seat on the Invasive Species Board is that at least 85% of the businesses being impacted by the ordinance are inside city limits,” Salters said. “We’re finding ourselves in situations where we’re having conversations with those businesses — maybe they have questions — and yet they don’t have a city representative they can turn to.

“That leaves us — and them — in something of a lurch.”

That said, Salters said he was fine to wait until 2021.

“We just started talking about this a couple of weeks ago,” he said. “I really had zero expectations.”

Salters, too, pointed to Mayor Joe Yochum’s decision recently to appoint a seat on the city’s Tree Board to the Soil and Water Conservation District after their non-voting seat on the Landscape Review Committee — also the Tree Board — was eliminated during a change to the city’s Landscape Ordinance.

“Because that’s what we want to do, Salters said. “We want to have a good relationship with those organizations.”

As for the Invasive Species Ordinance, commission president Kellie Streeter said she has asked that a review be placed on their next agenda; the commissioners will meet again at 10 a.m. on Sept. 1 at the Knox County Courthouse.

And she was quick to say the intent is not to make any sweeping changes.

“I think that has been misinterpreted,” she said as a handful of officials with the Knox County Cooperative Invasive Species Management Area have expressed concern that the legislation could be weakened. “We just want to read it again, make sure the public understands what it includes.

“It’s a new ordinance, one of its own kind,” she said. “And there have been issues arise from vendors. So as commissioners, I think it’s on us to review these things. But our purpose is not to change it.”

Hinkle, too, on Tuesday said his desire to review the Invasive Species Ordinance is not necessarily to amend it, but he is concerned that it is too overreaching, specifically in that it prohibits local vendors from selling these species to landscape customers living outside Knox County.

Local conservationists, however, have said allowing for these invasive species to be sold in neighboring counties is about the same as planting them right here at home; that’s how aggressively they spread.

And states across the country are now spending millions, sometimes billions, to rid their natural resources of invasive species, according to conservationist Ray McCormick, who attended the commissioners meeting Tuesday.

“But can we as commissioners stop a business from selling something in another county, one we don’t have any jurisdiction in,” Hinkle asked. “We don’t want an ordinance in place that opens the county up to a liability issue.

“I just think we need to have a conversation with our attorney about that,” he said. 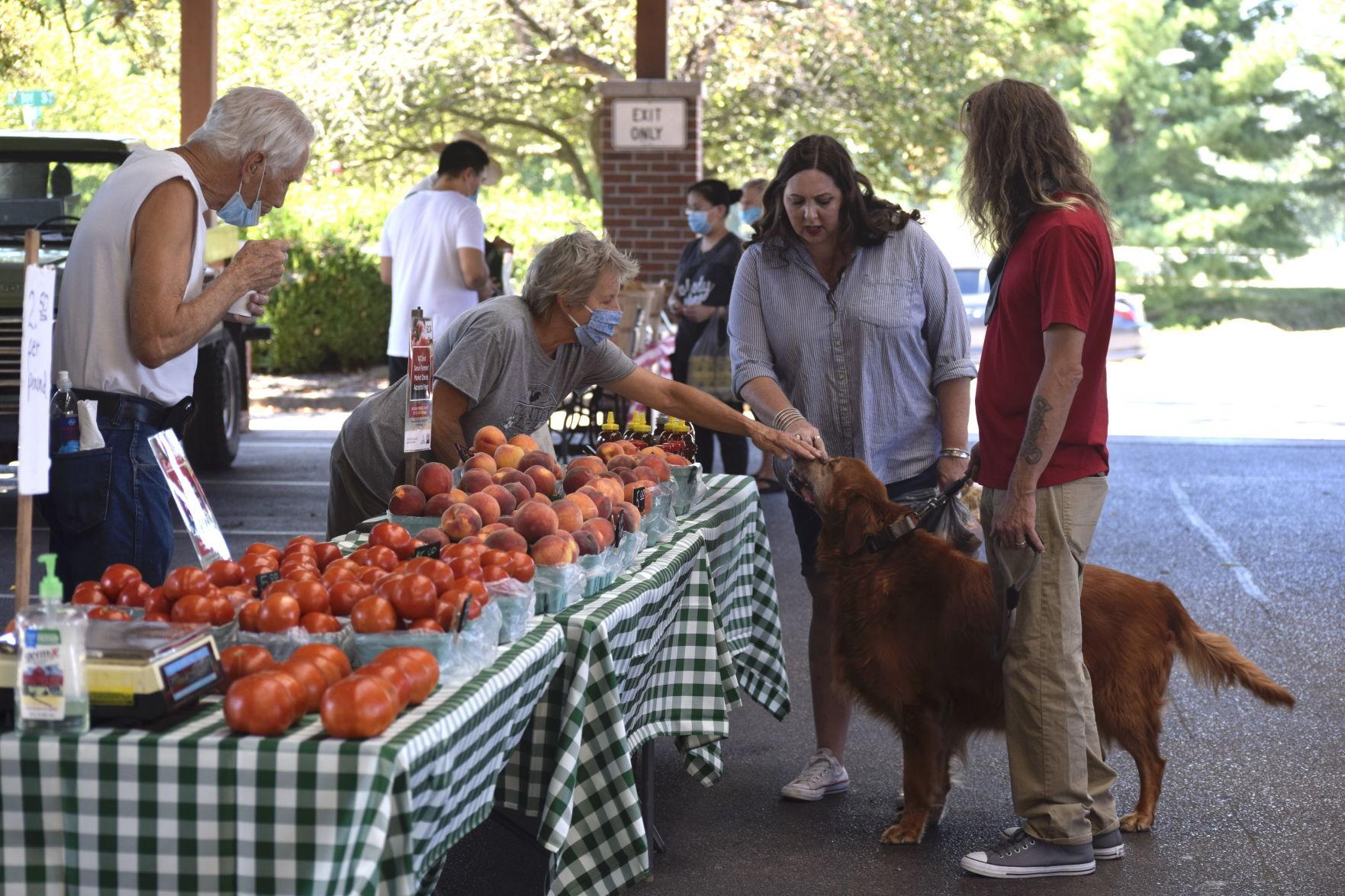 Misty Southers and Michael Michael and their dog, Sawyer, a 12-year-old golden retriever, visit with Debbie Abrassart with Brad’s Peaches, Monroe City, at the Farmers Market of Historic Vincennes Wednesday afternoon. Southers and Michael recently moved to Vincennes from their home in Colorado. The market continues from 4-8 p.m. on Wednesday evenings and again from 8 a.m. to 1 p.m. on Saturdays through the fall.

Knox County continued its record-breaking COVID-19 streak on Wednesday as it saw an all-time high of 50 active cases.

“We’ve had two more admitted to the hospital today,” he said. “We’re seeing dramatic increases in cases in Sullivan and Daviess counties, which will inevitably spill over into Knox County.

“And these numbers are far greater moving targets than they used to be.”

According to the state Department of Health, Knox County has 211 confirmed cases of COVID-19; Stewart’s own numbers reflected 214 cases.

Knox County has seen three COVID-19-related deaths so far, all of them in the last week.

Stewart said there continues to be community spread of the virus, and at least one local nursing home, Lodge of the Wabash, 723 Ramsey Road, has multiple confirmed cases.

One other unnamed facility is also seeing cases, Stewart said, and most local facilities have suspended visitation.

Oak Village in Oaktown also reported a positive case in an employee this week, and the Salvation Army of Vincennes suspended its drive-thru food bank this week due to a positive case there.

The Vincennes Community School Corp. has reported five cases so far at Lincoln High School although none at any of its other buildings; it also went two days with no new cases, spokesman Tim Salters reported on Wednesday.

South Knox reported one case in a kindergarten student early in the week — and the entire class was sent home to quarantine as a result — but superintendent Tim Grove said that wasn’t a positive case after all.

“So that’s great news,” Grove said. “The grandmother misread the results of the test, so she’s not positive. She’s negative.

“Our kindergarteners will be allowed to come back.”

South Knox hasn’t reported any other positive cases, although one teacher did previously test positive and was quarantined as school began last week.

“We have others who have been tested, and we’re waiting on those results,” Grove said. “I’m not naive; I don’t think this means we won’t have any positives for the rest of the year.

“But we certainly got good news today.”

Darrel Bobe, superintendent of the North Knox School Corp., on Wednesday reported one positive case at the Intermediate School. That student and a sibling were sent into quarantine, he said.

There was also a positive case in a student at the Jr. Sr. High School.

He’s launched a section on the school corporation’s web page, he said, so parents can “be made aware of COVID-19 cases on a real-time basis.”

“We just know it’s important to keep the community informed of that,” he said.

Stewart met with the school superintendents this week to discuss their response to these cases, and everyone, he said, is doing “an excellent job” given the circumstances.

“I think they’re all being extremely careful and doing the best they can,” he said. “The goal here is to be aggressive and to keep it from infecting large groups of people, to keep our schools open.”

Stewart added that he hasn’t been made aware of any positive cases at Vincennes University; classes resumed there on Monday.

“You would be amazed at the number of people who want to hold large events even though we’re in the midst of a pandemic,” he said.

Stewart also said that local numbers have spiked so significantly that the county health department can no longer keep up. Early on, Stewart was careful to make contact with each positive case and even do some of the contact tracing himself.

“The state is contacting these people with a recorded phone call and directions to call back and talk to an actual person,” Stewart explained. “Then they call and begin the contact tracing process.

“We’re just not staffed to do it ourselves,” he said.

Indiana saw 506 new cases of COVID-19 on Wednesday as well as another 14 deaths.

Daviess County has 346 confirmed cases, according to the state Department of Health website, and 22 deaths.

Sullivan County has 204 cases and one recorded death.

Members of the North Knox School Corp. Board of Trustees on Wednesday got their first look at what superintendent Darrel Bobe is calling a “very conservative” budget for 2021.

Bobe said the spending plan is not yet complete, but with a public hearing scheduled for Sept. 16, he spoke briefly about the budget to school board members.

COVID-19, he said, will likely make it a “very difficult year.”

“And I think it will be for all school systems,” he said.

Currently, state law only allows for virtual students to be counted at 85%. Gov. Eric Holcomb, however, has said he wants to see all students — whether they be studying at home or in the classroom — be fully funded in 2021.

“So that’s the hard part,” Bobe said, “not knowing what that number is going to look like when you start budgeting.”

State legislators, in the first sign of an extended olive branch, have moved what is commonly called “count day” from September to December, at the earliest; no official date has been set.

Count day is the day school administrators report exactly how many students they have in attendance, and it’s that number on which the Indiana Department of Education bases a school corporation’s funding for that year.

But with exactly how virtual students will be funded still up in the air, that count day isn’t likely to happen until late December, Bobe said.

He’s hopeful that when legislators reconvene, they will vote to change state law and allow for virtual students to be counted at 100%.

“So it’s still possible,” he said.

North Knox has about 7% of its students studying online as a result of COVID-19 — or 91 of its 1,300 students, Bobe said, a number that is less than he anticipated.

School corporations across the state, including the Vincennes Community School Corp., reported as many as 11% of its students opting to stay home this year.

“So that’s what I was counting on,” he said.

Bobe credits that to a public meeting North Knox held weeks ago for parents to learn about the virtual learning process.

“We did demonstrations, opened it up for questions for parents who maybe thought they wanted to give it a try,” he said. “And I think several of them opted to come back to school instead.

“Virtual learning is self-paced, requires self-discipline,” he said. “Some kids are good at that, some are just not.”

So while school superintendents wait to see just how virtual students will be funded — as they put pencil to paper and begin drafting spending plans for next year — Bobe’s advice is to tighten things up.

“We’re looking at numbers that are going to be hard to fund,” he ventured. “I think we’re entering a time where you’d better hope that you’ve managed your money well, that you have excess funds. We’re taking on added expenses and coupling that with a lack of funding.

“So I expect to see budgets that are very conservative.”