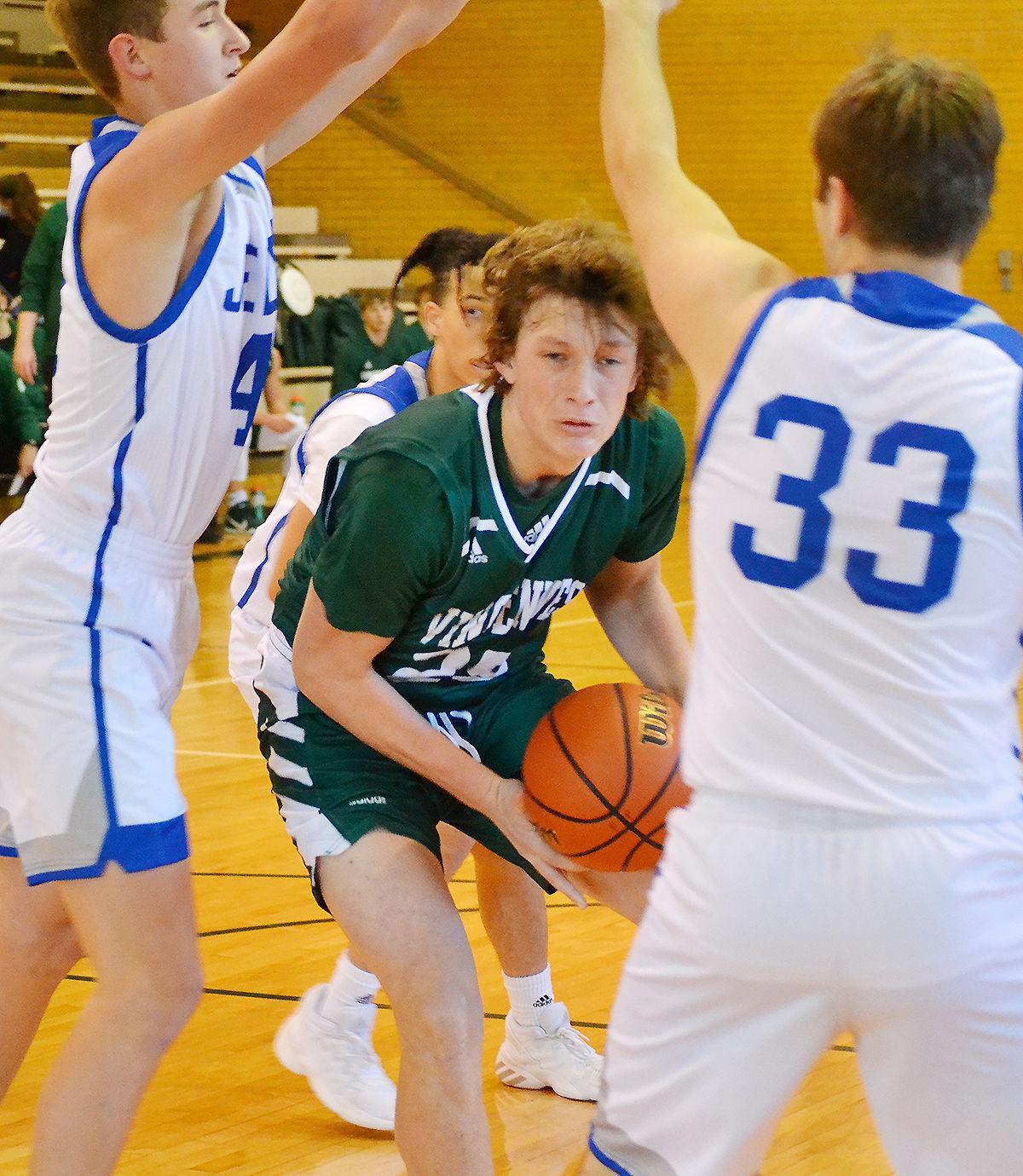 Even at 1-12, Alices staying resilient

Members of the county council on Tuesday expressed their intent to grant a tax abatement to a northern Knox County manufacturer looking to expand.

Larry Wagler, owner of Blue Jay Supplies, a wood wall panel and truss manufacturer located in Sandborn, went before members of the council with plans to invest more than $3.5 million to upgrade and expand his existing 38,000-square-foot building located on Indiana 67.

“This expanded facility allows us to keep pace with market demand,” Wagler said in a press release then issued Wednesday morning. “To be successful, we must continue to invest, so we’re happy to take this important step in Sandborn and Knox County.”

As a result of the expansion — and as part of a possible abatement deal with the county — Wagler plans to create at least 28 new jobs by the end of 2023, bringing the company’s total payroll to just over $5 million, an estimated increase of $1 million.

Currently, Blue Jay Supplies employs 104 people, according to documents filed with the county.

A tax abatement of the improvements would likely be phased in over a period of years and would be contingent upon annual compliance reviews by the council itself.

It will be a multi-step phase to approve the abatement, with a public hearing and confirmatory resolution necessary before it’s made final.

Many more details, too, still need to be worked out, but the council did approve a declaratory resolution on Tuesday indicating their intent to move forward.

Councilman Rich Chattin, who lives in northern Knox County and represents constituents there, said he, too, was “thrilled” to receive word of the expansion. Wagler, he said, was doing an “amazing job.”

“You’ve found a very cool niche in the market, and you’re doing very well with it,” he said.

And councilman Dan Reitmeyer called Blue Jay Supplies a “good neighbor to the residents of Sandborn.” He even eluded to Wagler’s willingness to help with some drainage areas near his property.

“It seems you are always extending hospitality and looking for ways to help the town of Sandborn,” Reitmeyer said. “I’m sure the people there are glad to see you expand your operation out beyond 100 employees.”

Chris Pfaff, CEO of the Knox County Development Corp., has been working with Wagler for weeks helping to connect him to state economic development officials and helping to possibly broker the local abatement deal.

Not only is the KCDC in favor of the abatement, Pfaff told the council, but the Indiana Economic Development Corp., too, has offered $165,000 in the way of conditional state tax credits, meaning they can be claimed once the investments are made.

“They recognize the significant investment the company is making,” Pfaff said, “especially in a more rural part of the county.”

Indiana Secretary of Commerce Jim Schellinger, in the press release issued Wednesday, said state officials are “excited for what this expansion means for Sandborn, Knox County and the state as a whole.”

“Indiana’s manufacturing industry is critical to our state’s economy and success, and growing manufacturers like Blue Jay Supplies play an important role in creating not only quality products, but career opportunities for Hoosiers,” he said.

The county council directed its attorney, Andrew Porter, to begin drafting the necessary abatement-related documents. The measure will be considered again — and a public hearing held — when the council meets again at 6 p.m. on March 9 at the Pantheon, 428 Main St.

But all-in-all, the council seemed on board.

“It’s a fun evening when we are able to share in the success of our neighbors,” Lechner said at the culmination of the brief discussion.

Family-owned Wagler Custom Homes, which Larry Wagler also founded, is a framing contractor for commercial and industrial work, with recent projects like IUPUI collegiate student housing in Indianapolis, evolve in Bloomington and The Post House mixed-use building in Evansville. 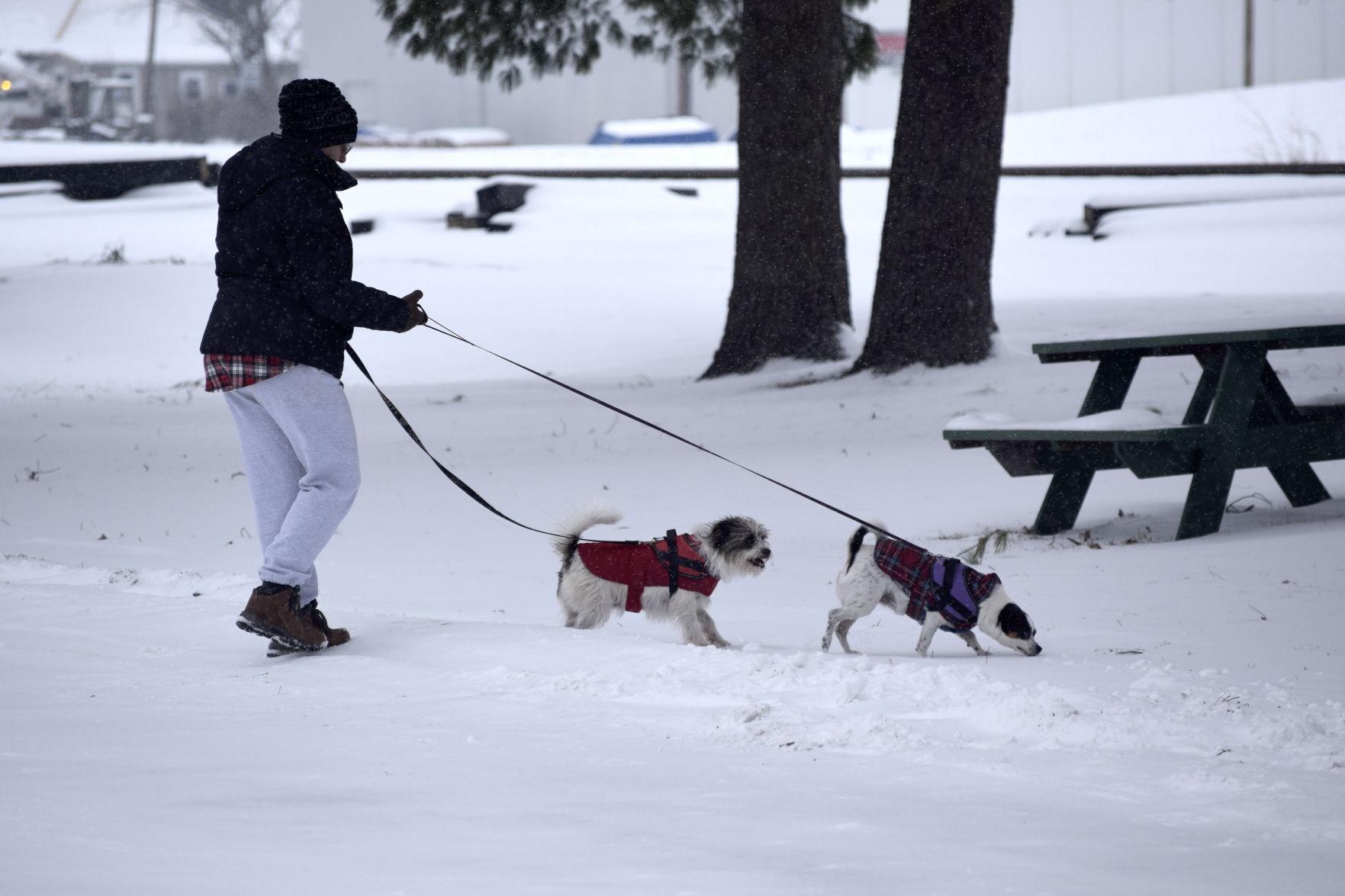 Local resident Mona Kays walks her two little dogs at Gregg Park as a wintry mix fell across Knox County on Wednesday afternoon. The National Weather Service was calling for an additional 1 inch of accumulation of snow and ice during this system, once again making roads slick and shuttering the county’s public schools for a third day in a row.

Wintry walk on a Wednesday

The Solid Waste Management District got one step closer to increasing its annual user fee after members of the county council on Tuesday added their blessing to one offered earlier in the week by their city counterparts.

Michelle Smith, executive director of the SWMD, continued making her rounds and appeared before members of the county council at the Pantheon, 428 Main St., asking for their support in her board’s consideration of a $5 increase to the existing $15 annual fee so they can expand recycling and collection services.

With Republic Services closing its facility to the public, currently, there is no where in Vincennes to regularly drop off recyclables or hazardous materials, so the SWMD has its eye on a new building, the former Anthis Heating and Cooling building, located next to the Moose Lodge on South 17th Street.

It would offer the organization a large enough space to accommodate its offices as well as a Household Hazardous Waste drop and a centralized recycling point for all county residents.

Right now, the SWMD is somewhat spread out — it has a small office on Willow Street, but its HHW drop off is at the Vincennes Street and Sanitation Department at 1600 Bayou St., and there are recycling trailers in Monroe City and Sandborn.

County council members, however, didn’t necessarily make it easy on her; councilmen Bob Lechner and David Culp, in particular, had several questions regarding the SWMD’s finances, specifically in terms of various line items, what is paid out in rent and recycling fees each year as well as the status of a relatively healthy cash reserve — the result of restitution payments paid out by former director Tracy Clinkenbeard.

In 2016, Clinkenbeard was charged — and later pleaded guilty — to stealing more than $470,000 from the organization over a period of several years.

Smith said she has been “conservative” with that money in the years since, knowing the organization would, at some point, likely need a larger facility.

The board has discussed using that cash reserve to purchase a new building, but without an increase in the fee, they wouldn’t be able to expand services — which is the whole point of moving.

“Our hope was to use (the reserve) and put it toward a new building so we can have a legitimate recycling center and HHW program,” she told the council, “one we can be proud of.

“We are pretty far behind other places in terms of environmental and recycling efforts. I’d like to fix that.”

Lechner, too, wanted reassurance that the increase in the fee would go to expand services, possibly with “drive-thru” recycling and hazardous materials drop off rather than just being spent on a new, larger facility.

“I think we’d like to know that it’s going to provide services to the under-served,” Lechner said, “as opposed to paying for higher rent on a nicer building.”

And Smith assured him that drive-thru service is very much on the table for consideration, should they be able to buy a bigger building. Having a centralized location, too, she said would allow them to apply for additional grants, ones that could go specifically toward more programming and services.

But the county and city councils don’t actually get a direct say in whether or not the fee is eventually increased. The decision is ultimately up to the SWMD’s own board of directors, which has an appointment each from the city council and county council — Tim Salters and Randy Crismore respectively.

Both, during the SWMD’s meeting last month, opted to hit pause on the conversation so they could consult with their fellow elected officials before casting a vote.

Crismore, in an effort to switch the direction of the conversation, said Smith’s “leadership” brought the organization “under control” after a time of chaos following Clinkenbeard’s arrest.

“I know it’s an increase,” he said with a sigh, “but we are talking about $5 here. I applaud what (Smith) is doing. I applaud her vision for wanting to do more. This is something that needs to happen.”

Formed in 1991, SWMD was originally funded by tipping fees from the county’s landfill. After that site closed, the district was funded briefly — and solely — through county dollars.

But in 2003, the district moved to a user fees as its sole form of funding, and an annual rate of $15 per parcel of property was added to each individual’s property tax bill.

Smith has said continuing to operate the SWMD on that amount just isn’t possible. Not to mention, Knox County’s annual rate of $15 is the lowest in Indiana, sitting at half the rate of Miami County, which is the second-lowest at $30 per year.

Beery pioneered the creation of the SWMD and wrote its original 20-year plan, Smith said.

He expressed an interest, she told the council Tuesday, in increasing the rate just before his death.

Councilman Dan Reitmeyer, too, clarified that the group was actually discussing a nominal $5 per year increase.

“Well,” he said, trailing off with a shrug of his shoulders.

And in the end, the council did vote to give its blessing to a possible increase.

The SWMD will meet again later this month to pick back up discussions.

INDIANAPOLIS — A bill that would require students at public schools to complete the Free Application for Federal Student Aid advanced to the Indiana House after lawmakers approved the measure in a Senate vote Tuesday.

Under the plan, authored by Republican Sen. Jean Leising, high school seniors would be required to fill out a FAFSA form unless a parent or school administrator signs an exemption waiver.

“We really need to do this in Indiana because we’re not ranking well,” Leising said Tuesday, adding that Indiana ranks 32nd in the country for student FAFSA completion.

Only 60% of Indiana’s 2020 high school graduates completed a FAFSA form, according to the National College Attainment Network. Leising said that left more than $70 million in potential federal aid unclaimed by Hoosier learners.

The Commission for Higher Education, the Indiana Chamber of Commerce and multiple Indiana colleges have supported the bill.

Similar measures have been adopted in Louisiana, Texas and Illinois. Leising noted those laws have resulted in FAFSA participation rates to “increase significantly.”