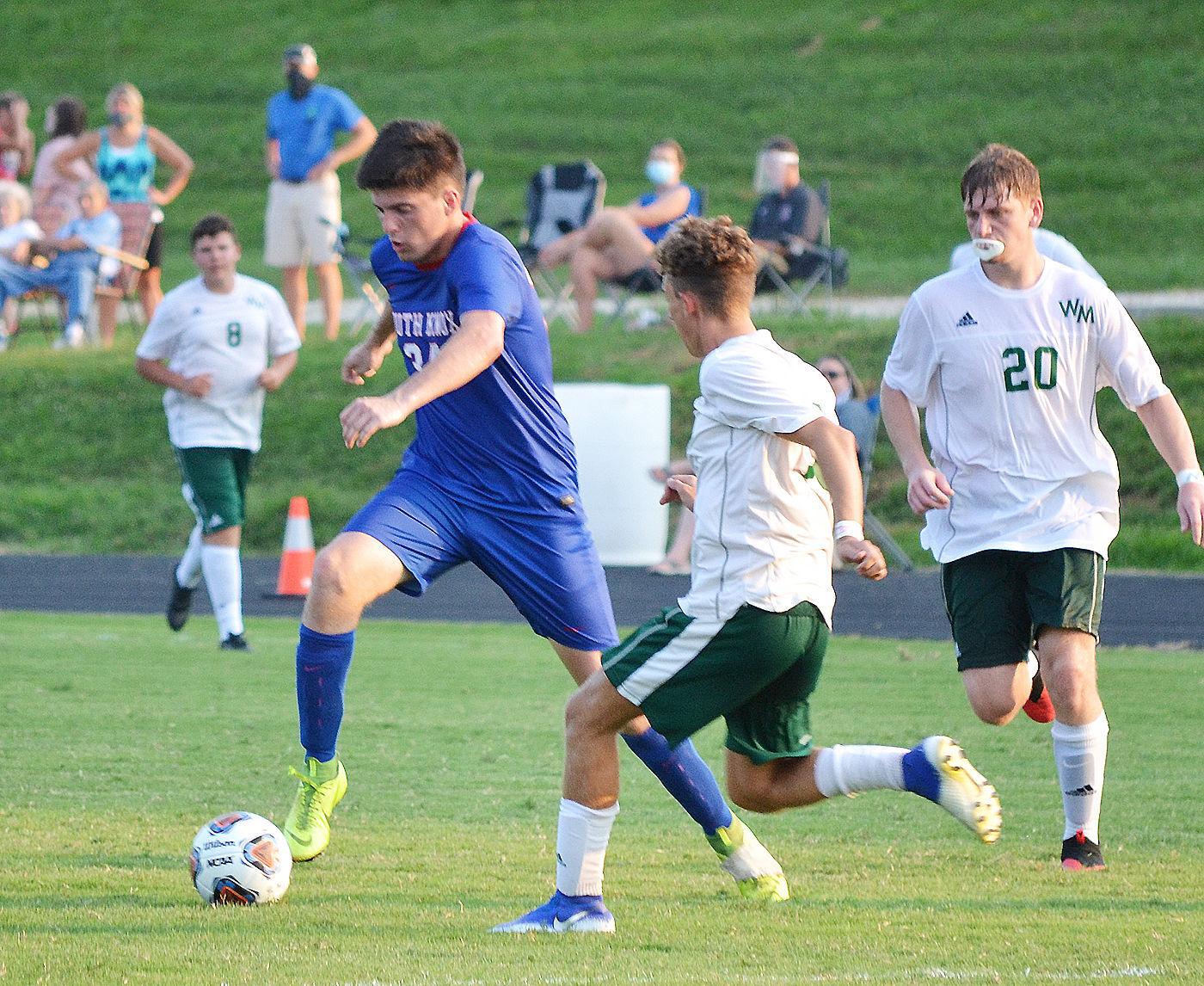 Crews work on the new Marshalls discount department store at the Kimmell Pointe Shopping Center Tuesday afternoon. Local developer Heath Klein says the store itself should be finished this fall but due to continued concerns surrounding COVID-19, it’s not likely to open to customers until next spring.

Work is ramping up on the Marshalls discount department store currently under construction in the new Kimmell Pointe Shopping Center.

But due to delays caused by the nationwide shutdown associated with the first wave of COVID-19, local developer Heath Klein said it isn’t likely to open to customers until springtime.

“Work did slow, but it never really stopped,” he said of construction. “They are behind schedule, though. Marshalls was supposed to open this fall, but with the pandemic, that’s now going to be later.

“They’ll finish the actual store this fall, but they probably won’t open until spring.”

Marshalls, headquartered in Massachusetts, will join Hobby Lobby as the first two anchor stores to locate inside the city’s newest shopping center.

Hobby Hobby, an arts and crafts and home decor store based in Oklahoma City, opened to eager customers in February and has had record sales despite the ongoing COVID-19 pandemic, Klein said.

“The projections Hobby Lobby had for the Vincennes store, they’ve exceeded those by 40%,” Klein said. “They had no idea the market here would be this big, that it would pull from such a wide radius.

“So that’s helped us in talking to some other businesses, tremendously,” he said. “That’s huge. We’re really excited about that.”

Before the pandemic hit this spring, Klein said he was in talks with about ten other tenants interested in building inside the Kimmel Pointe Shopping Center. Some of those conversations, he said, “have fallen by the wayside” as those business owners struggle to survive following the the nationwide shutdown.

But he’s still in talks with some, he said, and the success of Hobby Lobby has driven those talks forward in recent weeks.

The slowdown associated with COVID-19, too, has allowed Klein to more directly focus his attention on retail businesses and restaurants that he believes will do well here

“Overall, this has not been a bad thing,” he said of the pandemic’s affect on the retail development project. “It’s allowed us to really hone in on our target demographic, businesses that we think would do well here.

“Because we don’t just want a business to locate here and then close a few years later. We want businesses that are going to be here for a long, long time.”

Klein announced in the fall of 2019 that officials with Texas Roadhouse, a popular steakhouse, planned to build at Kimmell Pointe as well.

Construction has yet to begin, but Klein said he expects to see dirt moving by the end of the year.

The hope to be open to the public, he said, sometime next year.

“We’re still working with some others, and we hope to make some announcements early next year,” Klein said of other prospects. “We have definitely seen a slowdown due to the virus, but we’re in active negotiations with a couple still, and we hope to see something happen with those.”

It’s been nearly six years since Klein first announced he’d purchased the old Kmart property in the hope of redeveloping it, and it’s been three years since the city’s Redevelopment Commission partnered with him in building the Kimmell Road extension, which features the city’s first roundabout.

Progress, however, took something of a hit in the fall of 2017 after one big box retailer pulled out at the last minute, a move that eventually caused Klein to switch development partners altogether.

But it was a move, he previously said, that led to “bigger and better” anchor stores.

“It’s taken a little longer than I would have hoped,” he said of the development project. “But the guys I talk to in this profession say it’s actually gone really really fast, even with the pandemic.

“And I really believe in the tenants we have so far, so that’s good.”

The RDC, too, just completed a $4 million reconstruction of Main Street, the first of a three-phase effort, done, in part, to spur continued development there.

The first section picked up at 22nd Street and headed out to Jamestown Apartments; it includes connection into the Kimmell Pointe Shopping Center.

The two subsequent phases will eventually take Main Street improvements all the way out to Richard Bauer Drive. Designs for those are under way.

North Knox farmers Joyce and Don Villwock have been recognized by the Indiana Association of Soil and Water Conservation Districts. The couple, residents of Edwardsport, are the recipients of its River Friendly Farmer Award.

The Indiana Association of Soil and Water Conservation Districts recently honored North Knox farmers Don and Joyce Villwock as one of the recipients of the 2020 River Friendly Farmer Award.

Villwock Farms, Edwardsport, was nominated by the Knox County Soil and Water Conservation District and is one of 31 Indiana farms that received the statewide award this year.

The award winners are described by IASWCD president Roger Wenning as “the unsung heroes of Indiana agriculture,” having voluntarily instituted conservation practices that will protect and maintain the state’s waterways.

“They care about the land, natural resources and water quality and work to make things right for the next generation,” Wenning added.

Don Villwock is a graduate of Purdue University’s agriculture program and started farming in 1972. After Joyce completed her degree at Purdue in 1973, the couple married and Don said they’ve farmed as a team ever since.

“I am only a third generation farmer, but take the responsibility of leaving our farm better than we received it, very seriously,” he said.

The River Friendly Farmer Award, which is sponsored by Farm Bureau and the 92 local Soil and Water Conservation Districts, originated in 2000 and honors farmers who have implemented significant conservation practices that benefit the state’s water quality and other natural resources.

In choosing farms to recognize, the IASWCD looks for those using conservation practices such as grassed waterways, filter strips, cover crops and no-till methods.

Villwock, who also serves on the local Pantheon Board and on Vincennes University’s Board of Trustees, among others, said his farm has been completely no-till for over 35 years and that they have experimented with and used cover crops for more than two decades now.

“We also use moisture probes to reduce and schedule irrigation applications,” Villwock added.

Too, he said, his farm only applies things like nitrogen, phosphorus and potash (NPK) as needed.

The lifelong farmer says conservation practices are extremely important from an environmental standpoint but also for his operation’s long-term success and profitability.

Describing the local land as “environmentally sensitive,” Villwock explains that much of the land he farms in Knox County consists of highly erodible soils and that he also deals with flood-prone river bottoms on land in Daviess County.

It’s critical, he said, to control the scour and wind erosion.

“Controlling erosion was our first priority, but we soon found out that using no-till practices could greatly reduce our costs,” he said.

“Once we started no-tilling, we reduced our fuel, machinery and labor costs, while improving our soil health and drainage.”

The River Friendly farmers say they’ve also installed filter strips on the sides of large ditches and have terraces on the farmland that is highly prone to erosion.

“All of these reduce sediment and nutrients entering water sources,” Villwock explained.

The Villwocks say they have significant acreage of wetlands and woodland on their river bottom farms and this year are enrolling more than one hundred acres of that land in the Agriculture Conservation Easement Program — Wetland Reserve Easement, having already registered 40 acres in the program a few years ago.

“I think Joyce and I can say the air, soil and water quality are better on our farms now than when we started. We pride ourselves in saying we are a no-till and sustainable, commercial farm,” Villwock said.

The River Friendly Farm Award recipients are typically honored at the Indiana State Fair each year. With the cancellation of the fair, as a result of COVID-19 concerns, the Villwocks will be formally recognized in March of 2021 at KCSWCD’s annual meeting.

Remnants of Hurricane Laura are likely to bring heavy rainfall to southern Indiana later this week.

Hurricane Laura is expected to make landfall at the Gulf Coast tonight then push north and east, according to Aaron Updike, a meteorologist with the National Weather Service in Indianapolis.

But the worst of the hurricane remnants, he said, are likely to strike to the south, in the Kentucky and Tennessee region.

“But you’re still going to see some enhanced moisture with this,” he said of Knox County. “You’ll see a good amount of rainfall Thursday, Friday and Saturday as well as just some general cloudiness.

“Some regions may see more enhanced rainfall than others; right now it’s just hard to say where that will set up,” he continued.

“But it won’t be anything that poses a danger,” he said.

Until then, Updike said this hot, humid weather will stick around.

Today should be a carbon copy of Tuesday, he said, with highs in the lower 90s and dew points in the 70s, making it feel like nearly 100 degrees.

“And that heat is going to stick around until this weekend when we’re going to see a little bit of a drop in temperatures as another system brings in cooler air and pushes Laura out,” he said.

The forecasted high for Monday is a much cooler — and seasonable — 80 degrees, he said.

The NWS Climate Prediction Center is even calling for “below normal” temperatures next week and into the first of September.

Typical highs for this part of the year, he said, are in the low-to-mid 80s.

Meanwhile, more than half a million people were ordered to evacuate the Gulf Coast on Tuesday as Laura strengthened into a hurricane that forecasters said could slam Texas and Louisiana with ferocious winds, heavy flooding and the power to push seawater miles inland.

More than 385,000 residents were told to flee the Texas cities of Beaumont, Galveston and Port Arthur, and another 200,000 were ordered to leave low-lying Calcasieu Parish in southwestern Louisiana, where forecasters said as much as 13 feet of storm surge topped by waves could submerge whole communities.

The National Hurricane Center projected that Laura would draw energy from warm Gulf waters and become a Category 3 hurricane before making landfall with winds of around 115 mph.

Ocean water was expected to push onto land along more than 450 miles of coast from Texas to Mississippi. Hurricane warnings were issued from San Luis Pass, Texas, to Intracoastal City, Louisiana, and storm surge warnings from the Port Arthur, Texas, flood protection system to the mouth of the Mississippi River.

Officials urged people to stay with relatives or in hotel rooms to avoid spreading the virus that causes COVID-19.

The storm also imperiled a center of the U.S. energy industry. Oil refineries and liquefied natural gas plants dot the coastal region, and the government said workers were removed from more than 40% of the 643 platforms that are normally staffed in the Gulf.

As of Tuesday morning, Laura was 585 miles southeast of Lake Charles, Louisiana, traveling northwest at 16 mph. Its peak winds were 75 mph.

Laura passed Cuba after killing nearly two dozen people on the island of Hispaniola, including 20 in Haiti and three in the Dominican Republic, where it knocked out power and caused intense flooding. The deaths reportedly included a 10-year-old girl whose home was hit by a tree and a mother and young son crushed by a collapsing wall.

Marco, a system that approached land ahead of Laura, weakened into a remnant just off Louisiana’s shore on Tuesday. Satellite images showed a disorganized cluster of clouds, what meteorologists call “a naked swirl,” Jones said.

The Associated Press contributed to this report.