For months, the department operated its vaccine clinic at Community United Methodist Church on Hart Street Road but closed that operation on May 21 after traffic to the large location dwindled to a daily trickle.

Stewart said the smaller number of people seeking the vaccine meant the health department could meet the need within its own offices, located at 305 S. Fifth St., even though it is now operating at full capacity.

“We’re still getting used to doing things in our smaller space, but it will work,” said Stewart.

The majority of visitors to the clinic now, he says, are adults seeking the second dose of Moderna as well as kids aged 12 to 18 who are now eligible to receive the vaccine.

“We’re really pleased to be seeing a lot of 12 to 15-year-olds coming in,” Stewart said of a recent spike in clinic traffic.

Should an increased demand for the vaccine ever outpace the health department’s capacity, Stewart says officials will schedule special outreach clinics.

The health department, too, will soon be phasing out its use of Moderna and transitioning completely to the Pfizer vaccine.

The reason for the move, Stewart says, is simply a practical one.

“Pfizer’s vials have moved to holding five doses of the vaccine, but the new Moderna vials now hold 15,” he said.

Stewart explained that the steady decline in demand for the COVID vaccine locally could make it difficult for the health department to use all 15 doses contained within the Moderna vial in a timely manner — meaning those doses would be wasted.

Too, he says, individuals can receive the second Pfizer shot just three weeks after the first dose, instead of waiting four weeks with Moderna.

“Pfizer is just easier for us,” Stewart said, adding that those in need of their second Moderna shot should still schedule their appointment soon.

More than 13,000 residents have been fully vaccinated, and another 13,107 have received the first dose of a two-shot series, meaning that within a couple of weeks roughly 80% of Knox County adults should be fully vaccinated against COVID-19.

With such a large percentage of the population vaccinated and new COVID cases diminishing, Stewart says he is “cautiously optimistic” about the summer months.

“Some experts are talking more like COVID could become a seasonal thing, so the hope is just that it doesn’t really flare up again in the fall,” he said.

And, though the health officer continues to urge caution during the summer festival season, he says returning to some semblance of normalcy is important.

“While I am concerned about big events, I think local organizers are taking adequate precautions, and it is psychologically important to cautiously open things up,” Stewart said.

For more information, or to schedule a vaccination appointment, call the health department at 812-882-8700.

News
'Good for the soul'
Photos by Tom Bartholomew

The usual sounds of the Spirit of Vincennes Rendezvous — splitting logs for campfires, the tink tink tink of hammers against stakes as entire tent cities are erected and the far-off bleat of a mama goat — were joined Friday evening by a chorus of something just a little different.

“Hey!” a woman squeals as she jumps off the stump she’d been resting on, rushing into the open arms of an old friend.

“How are you?” she asks with tears.

“We’ve missed everyone so much,” another woman says as she, too, awaits her turn for an embrace.

It was a scene that played out time and again as merchants and re-enactors set up their camps — in many cases — for the first time in more than a year as the pandemic canceled most of their reenactment circuits last year.

“It’s so good to see each other again,” said Carol Jarboe, a loyal Rendezvous merchant from Woodburn, Kentucky. “We’re a family, and we’ve been apart for 18 months. Of course, we’ve been able to follow each other on Facebook, but it’s just not the same.

“I think everyone is looking forward to being here, doing what we’re all familiar with and feeling the joy that always comes with it.”

A few merchant tents over, Nicole Floyd was attempting to remember how to put up her canvas home for the weekend. Its been awhile, she admitted.

“I’m trying to relearn,” she said with a chuckle as she stepped outside into the cool breeze.

A basket merchant from Cayuga, Floyd said she was thrilled to be back among friends. Many Rendezvous merchants travel the country doing reenactment events each year, relying on these festivals as their primary source of income.

For Floyd, it’s simply a hobby; they do between 4-8 shows per year. But for many long-time friends, a return to the Rendezvous means the return of much-needed normalcy.

“I know how important it is to some of them, to be back here,” she said. “So I’m very happy about that. I’m happy for them.

“But it’s also just really exciting to be out and about with everybody again,” she said as she let her gaze drift across the French Commons, her hand offering a wave to someone who caught her eye. “It’s just nice to be able to do fun things again.”

And while it is good to be back amongst friends again, many Rendezvous merchants are worried about whether or not people will feel comfortable returning to the Revolutionary War reenactment with cases of COVID-19 still lingering.

“How will the public feel about coming out?” Jarboe asked rhetorically as she hung a sign across the front of her canvas shop. “Will they be concerned or will they, as we hope, come on out and enjoy the fresh air and pick up right where we left off?”

To reward those choosing to safely return, many long-time merchants are opting to offer visitors something a little new and different.

Jarboe and her husband, Frank, have been coming to Rendezvous for years doing historic demonstrations. They do sometimes as many as 40 shows in a year.

Locals likely know them as portraying resurrectionists, a common Revolutionary War-era practice where people dug up cadavers and sold them to medical schools.

This year, however, they’re introducing demonstrations on survival jobs from early America.

“The things you could do if you were destitute and had no job skills,” she explained. “A lot of people came back from the war missing legs, missing arms, and couldn’t make a living anymore. You could either go to the poor house, which was awful, or we’ll show you ten jobs you could do to at least make enough money to survive day-to-day.

“I think a lot of us have worked hard to bring in some new things, bridge the gap,” she said. “I know a lot of merchants have been busy creating new products over the last year.

“Everybody is bringing their best.”

She, too, said it was a relief to be back doing what she loves after a year largely without. Living in relative isolation, she said the neighbor’s cows eventually got tired of her mindless chatter.

“So this is fantastic,” he said with a wide smile as she carefully set out jewelry displays. “It’s so good to be back here again, seeing everybody. This is what I do full time. It’s amazing for the soul because I’ve just been at home but also much-needed because I need the income for my small business.

“I know a lot of (other merchants) didn’t make it through (the pandemic),” she said, sadness creeping across her face.

Jim Allen, Ramsey, a re-enactor with the Illinois regiment of Virginia, said being back, for him, was bittersweet. They’ve lost some of their own to the pandemic, he pointed out.

“So it feels good to have survived,” he said. “And it’s good to be back, too.

“It feels a little different, but then again everything feels different now.”

Jane Whiteside, a few tents over, worked to unfurl rope so she could set up camp. A member of the Pennsylvania Rifle Battalion and a loyal Rendezvous re-enactor for 35 years, she, too, was enjoying an evening back amongst old friends. The smell of campfires and children’s laughter brought much-needed warmth to their hearts after a year of hardships and heartache.

“This whole group is like a family — a big family,” she said. “Some re-enactors are here with four generations of family. So being able to get dressed up again, see our friends, it’s interesting.

After being largely quiet during the last year due to the pandemic, downtown Main Street is springing back to life come Friday.

Spring On Main will return this year after being canceled in 2020. Main Street between First and Fifth streets will be closed to traffic — the side streets will remain open so pedestrians should beware — to make way for a slew of activities from 6-10 p.m., including kid’s games, food vendors, classic cars with the Hoosiers Cruisers, live music, and beer and wine tasting, too.

Spring on Main also will mark the first time that all three downtown art galleries are back open for the First Friday Art Walk after canceling the monthly events last year amid the pandemic.

The Open Gallery, 329 Main St., will celebrate its post-pandemic reopening with “Night Visions,” an exhibit illustrating the beauty of the stars with photography by local artist Chuck Reinhart.

Reinhart’s Milky Way photos are “expansive and remarkable captures of the night sky,” according to a press release issued by local gallery owners. His work has been featured by NatGeo and SkyView.

A literary scholar by trade, Reinhart suggests that the English Romantic poets used their works to show a connection between the natural and the spiritual worlds.

“In a similar but less serious way,” Reinhart states in the press release, “my photos establish a connection between the ordinary and the extraordinary.”

The show will be a combination of art that has been in storage for decades with newer pieces from both artists. Delap will be presenting her paintings and collages, while Jendrzejewski will be featuring his paintings and sculpture.

“Some of these pieces in this show that 50 years old,” Jendrzejewski said. “I have a piece in this show from undergraduate school in college.

“This is an experiment for us.”

Linn is the owner of Fords the Art of Photography Studio and was recently named Knox County Business Woman of 2021 by the Knox County Chamber of Commerce.

For six weeks last summer, during the pandemic outbreak, Linn walked through local neighborhoods, covering countless miles as she documented over 500 families on their front porches to bring a sense of connection between families, friends, and their loved ones during the pandemic.

Other artists that will be represented at the guild’s gallery on Friday include guild president John DeCoursey, gallery director Sarah Frenz, Bill Meyer, Shirley Truelove, Matt Ramsey, Paul Spangler, and many more.

Most of the events are free and open to the public. All proceeds will benefit the Downtown Vincennes Association. 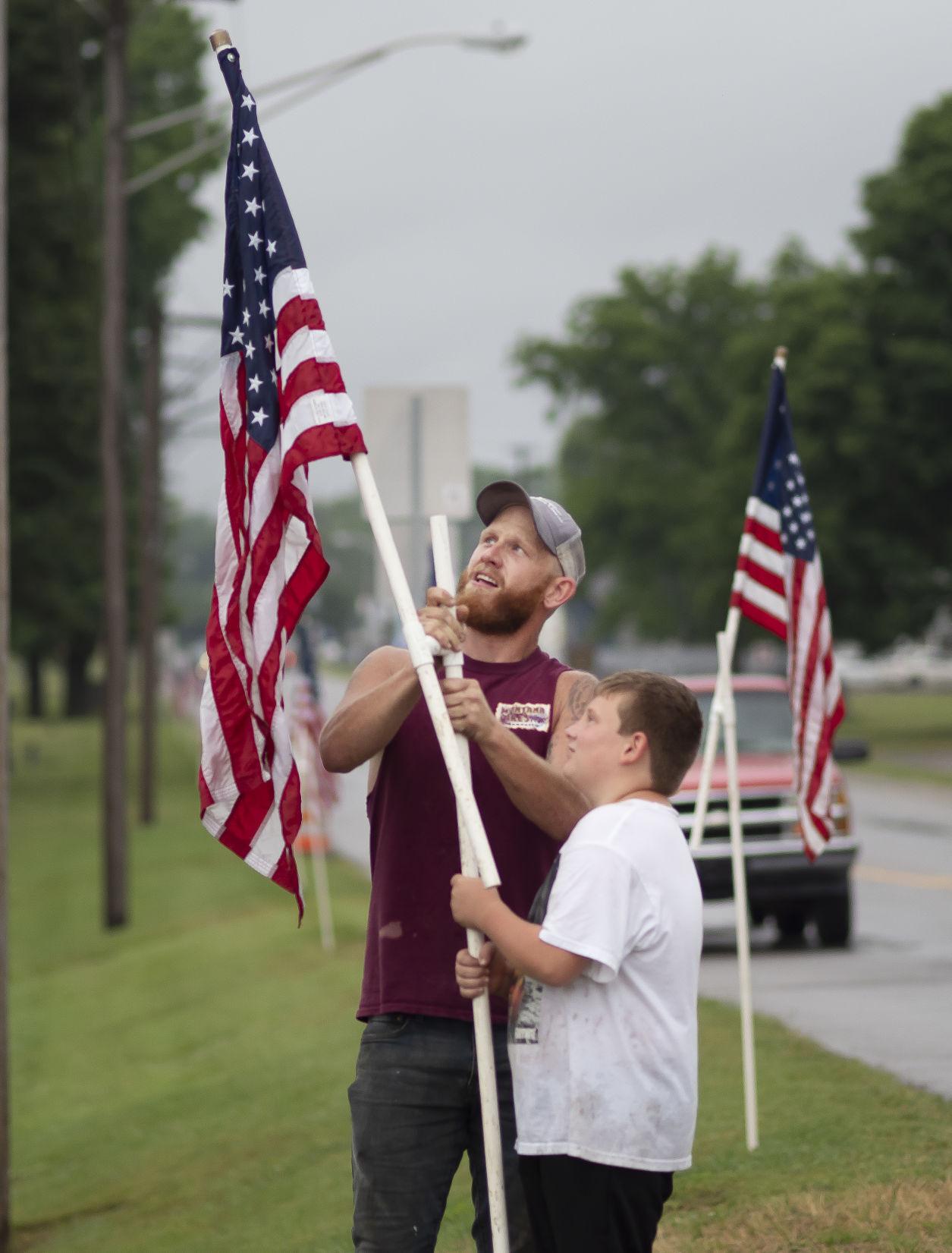 Chris Hussey and his son, Kayden, 10, of Vincennes, place American flags along Willow Street on Friday morning for the Vincennes Civitan Club in observance of Memorial Day.