Local Republican Party leaders have chosen Brian Johnson, an attorney with Kolb Roellgen and Kirchoff, to fill an empty slot on the Nov. 3 ballot following the death of Superior Court II Judge Ryan Johanningsmeier in a plane crash just two weeks ago.

Seven local attorneys sought to take the empty Republican — and unopposed — ballot vacancy, and party officers over two days this week conducted interviews with all of them.

“We felt he was best-suited to carry on the legacy of Ryan Johanningsmeier,” Shelton said. “His participation with the Knox County Drug Court program has been phenomenal.

“Brian has also been a great public defender for several years, so much so that he is one of the few we have to constantly monitor his numbers because he is assigned so many cases,” Shelton, also a member of the county’s Public Defender Board, said. “All the judges respect him so much. So that’s a good indication and a good reflection on him.”

Both Republicans and Democrats could file the state paperwork to seek the ballot slot, but the decision was ultimately up to local Republicans as Johanningsmeier was elected in 2014 as a Republican.

Shelton said he drafted 50 interview questions over four categories. The first candidate, he said, made it through 20, so it was those same 20 questions they asked everybody else in an effort to create a level playing field.

“We’re human,” Shelton said. “We all went in with our favorites.

“But Brian’s interview changed the minds of two of our officers.”

Shelton, too, said the panel’s primary focus was in finding someone to carry on with drug court in the spirit with which Johanningsmeier launched it years ago.

And Johnson has been involved in drug court since its conception, working alongside Johanningsmeier as a participant advocate.

“Carrying on the legacy of drug count is very important me,” Johnson said. “And I know it was important to the selection committee, too.

“I’ve invested a lot of my own time into drug court as a volunteer, so keeping it going will be one of my main priorities.”

And it only works, Johnson said, if there is a judge who, like Johanningsmeier, cares so much about the welfare and future of its participants.

“Drug court takes the traditional court model, which is very adversarial, and flips that on its head,” Johnson said. “It makes it more of an open-ended session where the defendant can’t hide behind, ‘Hey, I don’t want to talk about what happened.’ It involves the judge interacting a lot more with the defendant, and the reason it’s so successful here is because of the community involvement it receives, from law enforcement to churches to treatment providers.

“And that was done, single-handedly, by Judge Johanningsmeier.”

Johnson said he was elated to have been chosen, but he first acknowledged the “tragic circumstances” by which the process came about; his condolences, he said, go out to Johanningsmeier’s family and friends.

“This is never the way you imagine it going,” he said of accepting the ballot vacancy, “but it is what it is.

Johnson, who has been with Kolb Roellgen and Kirchoff, the city’s oldest law firm, since he graduated from Valparaiso University’s law school ten years ago, said he also looks forward to keeping Superior Court II running smoothly and efficiently.

The court handles a variety of cases, mainly lower-level misdemeanors and felonies. The volume, however, is typically much greater than the other two county courts.

“So I think keeping court running efficiently is going to be one of my top priorities,” Johnson said.

Since Johanningsmeier was unopposed on the ballot, Johnson will be, too; the deadline for Democrats to have appointed a candidate passed on June 30.

So Johnson will certainly take the bench on Jan. 1 for a 6-year term, although his time may come sooner, Shelton said.

Only Gov. Eric Holcomb can appoint someone to fill the unexpired term permanently, Shelton said.

So he delivered a letter to the governor on Thursday — one signed by all four Republican Party officers — asking that he “respectfully consider” their choice and go ahead and appoint Johnson to fill out the remainder of Johanningsmeier’s term.

An answer, however, isn’t expected for several weeks.

Johnson is a 2003 graduate of Lincoln High School, then he attended Indiana University’s Kelly School of Business.

He graduated from Valparaiso in 2010.

He has primarily worked in criminal law since but also does contractual litigation law and represents several local businesses.

He and his wife, Elizabeth (Keller) Johnson, recently welcomed their first son, Thomas. 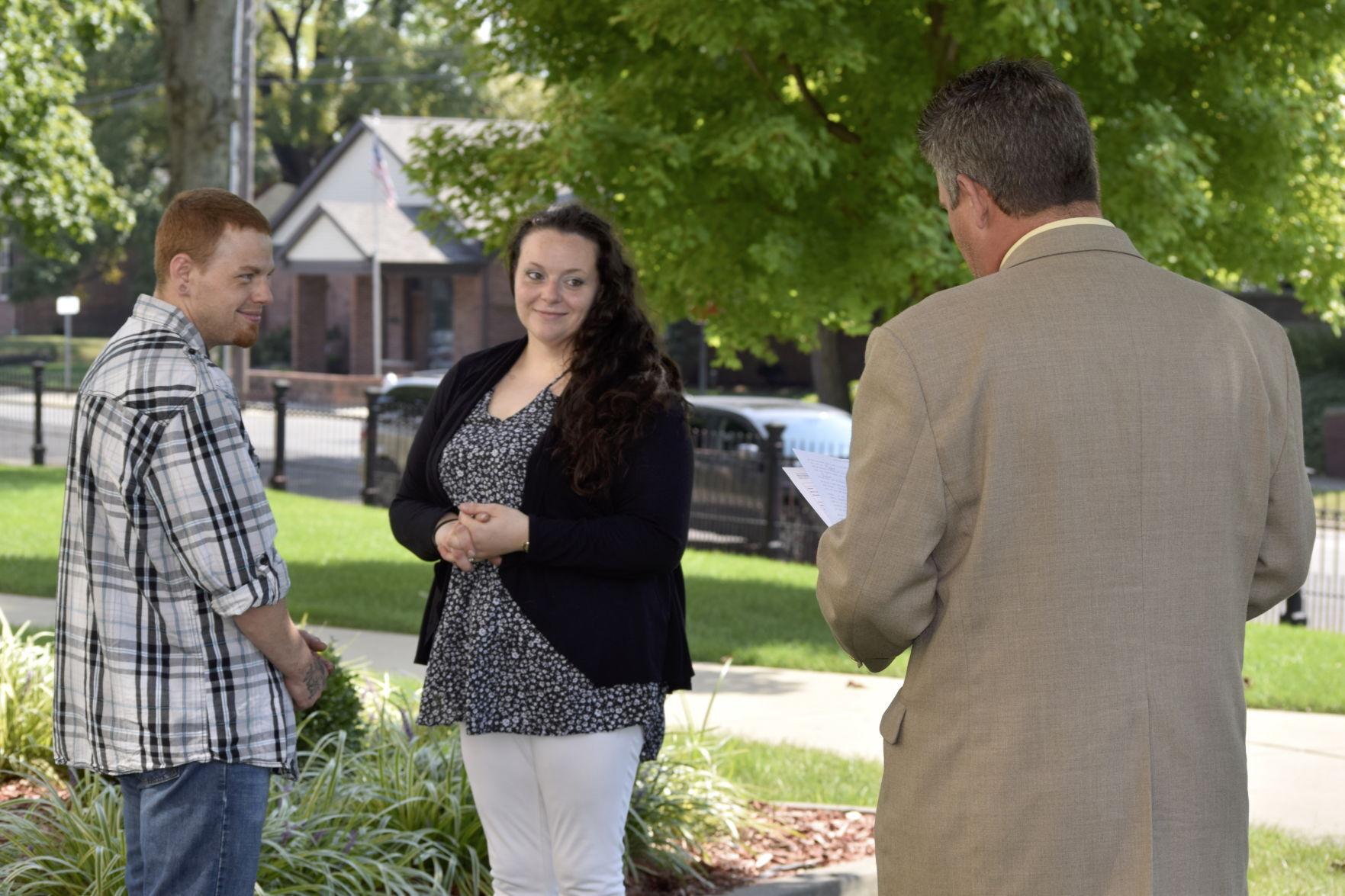 Knox County Clerk David Shelton on Thursday presided over an impromptu wedding ceremony on the courthouse lawn between local residents Amber Nunley and Tyler Opel. Shelton said of all his responsibilities, performing wedding ceremonies is “one of his favorites.”

A wedding on the courthouse lawn

These buildings at 316, 318 and 320 Main Street are seeing updates and repairs thanks, in part, to funds contributed by the city’s Urban Enterprise Association.

Members of the Urban Enterprise Association are finally seeing the results of a project they decided to pursue two years ago.

The UEA owns 316-318 Main St., the old Albert’s building which now houses both the Knox County Chamber of Commerce and the Northwest Territory Art Guild.

After deciding to keep the building indefinitely in early 2018, that summer they decided to pursue a restoration of its facade as well. They hired local contractor Sherm Jenne, the owner of Jenne Renovation and Construction, to, among other projects, repair the tile in the building’s main entrance as well as expose and replace some windows on the building’s second floor. The project, too, included some fresh paint.

The work didn’t immediately begin, however, and then the UEA asked him to hold off last year as their funds ran low.

They gave him the green light earlier this year, but then Jenne wasn’t able to get started amid concerns surrounding the spread of COVID-19.

He was able to begin recently, and he reported to UEA members during their meeting Tuesday night, held at the city’s Tade Building at the corner of First and Hart streets, that he is nearly done.

The tile for the new entry way is on back order, explained UEA executive director Dan Ravellette, and isn’t expected for another month.

“But that’s the last thing that needs done,” Ravellette said.

The UEA, seeing most of the work complete, voted to go ahead and pay him the $5,600 owed for the job.

The board also this week heard from Kaitlyn Ashby, who owns Brush and Blush, a hair and makeup salon at 516 Main St.

Ashby, who earlier this year was named one of the Chamber’s 5 Under 40 winners, has purchased the former Esco Walks Building at 320 Main St.

Ravellette said she now co-owns the building with a family member and plans to expand her salon into its main floor.

It’s a building that has worried city officials for years, specifically a rear exterior brick wall that, since it’s separating from the main structure, posed a danger to other structures and passers-by.

Former city inspector Philip Cooper kept a close eye on the three-story building after condemning it in 2013 and ordering its then occupants, gamers with Legends, out.

Eventually, local contractor Steve Wolfe bought it. He made some repairs to the storefront, specifically in replacing its windows, and put a new roof on it, too.

He also shored up that back wall temporarily, but Ashby is ready to move forward with a permanent fix.

Ashby came armed with two local estimates for the work — one from Hendrixson Concrete and another from Sure Clean — and the UEA voted to give her $30,000 toward the overall project.

“That building has been a prominent building in downtown Vincennes for many years,” Ravellette said. “The board wants to do its part to see it restored, to keep it and to avoid any possibility of it falling down or being torn down.

“We don’t want to see an empty space there. We want to keep that (project) going.”

That brings the county’s total number of coronavirus-related deaths to eight and the number of confirmed cases to 406 since the pandemic surfaced in March.

On Thursday, county health officer Dr. Alan Stewart said several patients continue being treated at Good Samaritan Hospital, with seven in the Intensive Care Unit and three of those patients on ventilators.

Though Knox County initially went months without a COVID-19 death, Stewart says more fatalities are expected as community spread of the virus continues.

“People who are more active have gone on vacation and things like that, but with community spread the virus inevitably gets into places where it’s most dangerous,” Stewart said.

The health officer explained that attempting to selectively protect specific populations, while others carry on with life as normal, doesn’t work long-term and that the continued uptick in the number of deaths and critical cases reveals that harsh reality.

“The theory of selective protection — like protecting nursing homes while others go out and party and gather — it just doesn’t work that way,” he said.

“Younger and healthier people will still bring it home and spread the virus to parents or grandparents.”

There is also a concern about long-term health effects of COVID-19 that may go unseen for some time, specifically in those deemed otherwise healthy.

Stewart said younger people who have tested positive for the virus — and specifically athletes — would be wise to seek some follow-up medical treatment before returning to sports.

There have been a small number of otherwise healthy young patients who have experienced cardiac irregularities after their COVID-19 recovery, he said.

“We just don’t yet know the full extent of the damage this virus can do,” he said.

Some good news, though, Stewart noted, is that Vincennes will have a new drive-thru testing site opening Monday at 300 N. First St.

Anyone can receive a COVID-19 test at the facility at no personal expense. Those who are insured will have the claim submitted to their insurance companies, with any remaining balance covered with state funding.

Those without insurance pay nothing out of pocket.

While anyone can visit the clinic and be tested, Stewart said the priority really should be testing those who have been directly exposed to the virus and those who are symptomatic.

“And if you have been exposed, it’s best to wait four or five days before being tested because otherwise your test won’t show anything,” the doctor cautioned.

Area schools continue operating in their new normal conditions, and Stewart has been pleased with their efforts thus far.

North Knox School Corp. currently has ten active cases of the virus, with six of those affecting the Jr. Sr. High School and four cases in the Intermediate School.

South Knox is currently reporting only one active case at the Middle High School on its online COVID-tracker.

The Vincennes Community School Corp. has steadily remained at two active cases at Lincoln High School the past several days, including one staff member who comes out of quarantine and returns to work today.

The state saw another 764 confirmed cases on Thursday and another 13 deaths.

There have now been 102,243 Hoosiers test positive for the novel coronavirus. Among them, there have been 3,186 deaths.

The state’s 7- day infection rate — for all tests administered — stands at 5%.