Local school superintendents are reacting well to a recent decision by the Department of Education to fully fund virtual students.

The Indiana State Board of Education has approved a method to maintain funding for schools reopening virtually — or some hybrid of virtual and in-person instruction — this fall after warnings of possible cuts from lawmakers last month.

The board unanimously approved the plan Wednesday, allowing the state to use data from the last student count in February to determine whether schools should receive full funding for their students, regardless of whether those students are receiving instruction virtually or in the classroom this semester.

Currently, state law only allows for virtual students to be funded at 85%.

Under the board of education’s new plan, the fall student count day will happen as planned on Sept. 18, but school budgets won’t be penalized for offering instruction online.

Students will not be counted as “virtual” — meaning schools won’t see the 15% reduction in basic per student funding — as long as they were not enrolled in a full-time virtual education program on the previous enrollment count day.

“That would have put us in a very negative position,” said Vincennes Community School Corp. superintendent Greg Parsley. “We’re actually up students here at the beginning of the year, which we usually are. But then they trail off.

Parsley added that the state board’s decision this week will require action by the General Assembly when they reconvene next year, but lawmakers have “signaled there will be no issues,” he said.

South Knox superintendent Tim Grove, too, called it “the right thing” to do, especially since educators really had no choice but to offer a virtual option to families concerned about the spread of the novel coronavirus.

“I’m not necessarily in favor of full virtual funding, not in a normal, non-COVID year,” Grove said, “but certainly at this point, we have people in virtual education because of COVID. So I’m glad intelligent minds prevailed here.”

Across the board, school corporations have seen approximately 10% of their students go to virtual education.

At South Knox, Grove said some problems with the virtual program the school corporation chose to use sent some back to the classroom in frustration.

Parents of kids in kindergarten through fifth-grade reported issues with the program, slowness, etc., so of the 41 that originally signed up for virtual education, only about 25 remain, Grove said.

Either way, Grove is pleased that, regardless of what that number is, the school corporation will receive full funding for those students.

Darrel Bobe, superintendent of the North Knox School Corp., which has about 7% of its students in virtual education, said he, too, was “very appreciative” of the state’s actions to fully fund those students.

“We were put into a situation where we had to offer something to families,” he said. “And it’s an expensive cost to a lot of schools to offer that option. Having full funding is going to help us provide that kind of education.

“I think (the state) looked at it just as we did — that we simply didn’t have a lot of choices here.”

And Bobe also agreed that keeping count day in September is “important.”

It’s imperative, he said, to keep consistent track of a school’s enrollment year to year. Postponing count day, he said, wouldn’t allow for an accurate depiction.

“If we do count day in December, you aren’t going to get a true read on how a school is doing, enrollment-wise, from year to year,” he said. “Here at North Knox, we’re down a little bit, but that’s OK. We still want to do count day in September; we want a true picture of where we are this year compared to last.

“We want our people to know what our true financial picture looks like,” he said. “Keeping count day in September was a smart move, and I’m very very happy about full funding for virtual students.”

That said, Bobe doesn’t believe the worst is behind Hoosier schools, not by a long shot.

“There’s no way that school corporations won’t see funding cuts,” he said as a result of COVID-19. “That’s the writing on the wall.” 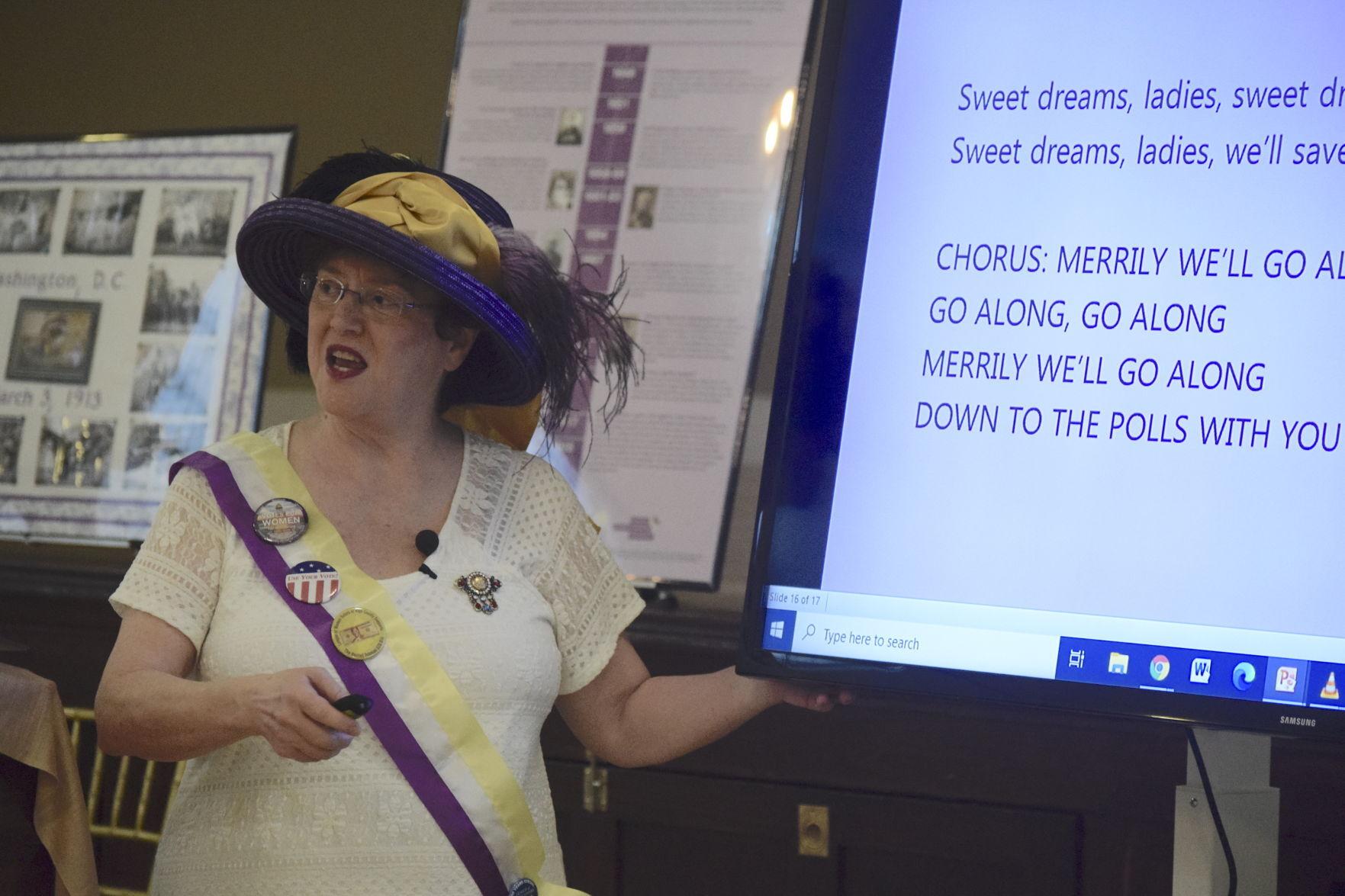 Marsha Miller, an Indiana State University professor and librarian, hosted her program, “From Amanda to Zerelda: Hoosier Suffragists Who Raised a Ruckus,” Wednesday night at the Fortnightly Clubhouse. Miller spoke for nearly an hour on the Hoosier women who helped to shape the movement, including Amanda Way, Grace Julian Clarke, Mary Garrett Hay, Helen Gougar, Zerelda Wallace, Kate and Eugene Debs, Ida Husted Harper, and May Wright Sewall. Miller also described the little known 1917 Maston-McKinley Partial Suffrage Act, the Legislative Council of Women and Indiana and remarks from Indiana Gov. James Goodrich upon signing the ratification documents. This program was made possible by a Indiana Humanities grant with funding from the Lilly Endowment, Inc. and Hillenbrand Industries. It’s also part of the Indiana Women’s Suffrage Centennial. Knox County Public Library, Shake Library at Vincennes University, the Knox County League of Women Voters and Francis Vigo Chapter, and the Daughters of the American Revolution collaborated to bring this event to Vincennes.

THE WOMEN WHO SHAPED A MOVEMENT 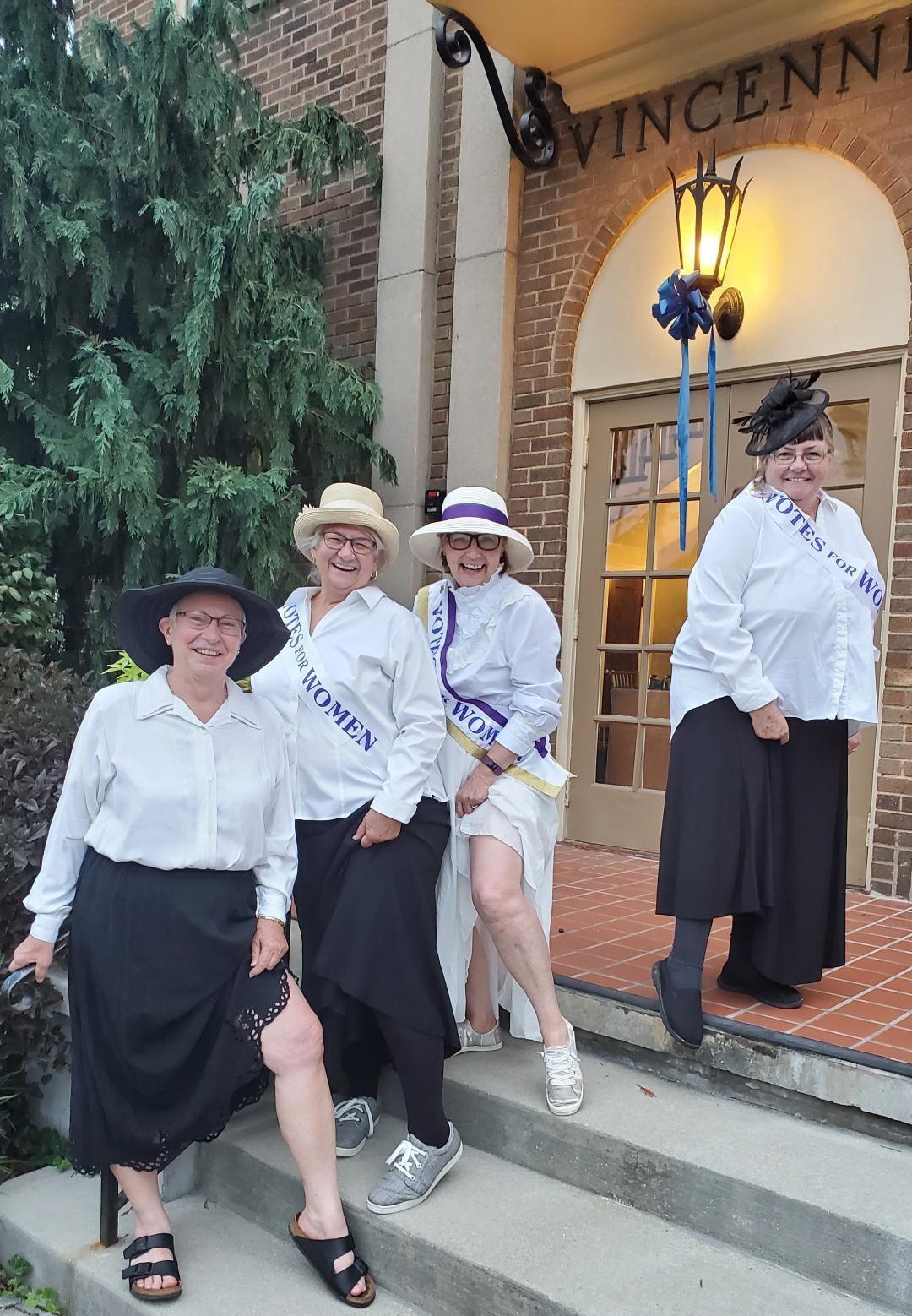 Women with the Daughters of the American Revolution on Wednesday enjoyed a presentation on Hoosier Suffragists at the Fortnightly Clubhouse hosted by Indiana State University professor and librarian Marsha Miller. Pictured from left are Rita Hagerty, Cathy Dever, Linda Heath and Cynthia Frederick.

Knox County reported 10 more confirmed cases of COVID-19 over a two day period this week, marking a welcomed, albeit it slight, decline.

On Monday, there were 79 active cases in the community, but county health officer Dr. Alan Stewart said that number will drop to 50 today barring a new resurgence of positive test results.

Several patients continue being treated at Good Samaritan Hospital, with four in critical condition and on ventilators.

Explaining the significant decline in active cases, Stewart said, “we had extremely large numbers at a manufacturing facility, and at Lodge of the Wabash (a local nursing home) where there were 28 patients and seven employees who tested positive.

“So in one day we had 42 new cases, and many of those folks are now coming off the list,” he said.

Though those two locations were significant factors in the uptick in cases last month, Stewart is still very concerned about general community spread.

He pointed out that some of Knox County’s biggest spikes in COVID-19 cases came after holiday weekends and urged extreme caution as we move into Labor Day weekend.

“After Memorial Day and Fourth of July we saw an uptick in cases. Hopefully this time people will avoid large gatherings,” Stewart said.

The North Knox High School football team is taking a hit this week, as one of its players recently tested positive for COVID-19, prompting the cancellation of its game tonight against Tecumseh High School in Lynnville.

The student athlete, who became ill last Sunday, is one of two currently active cases at North Knox Jr. Sr. High School, and another two at the Intermediate School.

“He got sick last week, and we got confirmation that he was positive yesterday,” superintendent Darrel Bobe said of the football player.

None of the other team members have been quarantined because they have not been with the student since last Friday, according to Bobe.

Athletes will not return to practice until next week, and the COVID-positive student is expected to return to school Sept. 14.

South Knox is currently reporting three active cases at the Middle/High School on its online COVID-tracker.

The Vincennes Community School Corp. reported one new student case at Lincoln High School Thursday afternoon, noting that the student was last in the classroom on Aug. 28

Knox County currently has a total of 362 confirmed cases of COVID-19, and its 7-day infection rate stands at 15%.

The state saw another 1,110 confirmed cases on Thursday and another 4 deaths.

Knox County has had four recorded deaths from COVID-19 so far.

There have now been 96,854 Hoosiers test positive for the novel coronavirus. Among them, there have been 3,110 deaths.

The state’s 7-day infection rate stands at a lesser 7.4%.

INDIANAPOLIS — The Indiana University School of Medicine announced Thursday that it's seeking up to 1,500 volunteers to take part in a late-stage clinical trial of an experimental COVID-19 vaccine.

The medical school is one of 81 sites in the U.S. — and the only one in Indiana — chosen to test the vaccine developed by British drugmaker AstraZeneca in partnership with Oxford University.

Nationwide, researchers plan to enroll a total of 30,000 participants for the clinical trial of the Cambridge, England-based company's vaccine, known as AZD1222. Two-thirds of the participants will receive the vaccine and the remaining one-third will get a placebo.

IU's vaccine testing will be conducted at IU Health University Hospital, located in Indianapolis. The Phase III trial is the last stage before manufacturers can seek the Food and Drug Administration's approval for widespread public use.

Dr. Cynthia Brown, an IU School of Medicine researcher who's overseeing the local study, said the hospital is hoping to enroll about 1,500 people over about eight weeks.

The school said people interested in taking part in the study can create a volunteer profile online with “All IN for Health.” They will then be alerted when enrollment opens for the vaccine study.

To be eligible, volunteers must be over 18 and not have tested positive for COVID-19. However, they must be at increased risk of contracting COVID-19, such as working in a school, store, warehouse or health care system, the medical school said.

Volunteers will need to travel to Indianapolis to receive two doses of the vaccine or placebo, as well as attend follow-up visits. They will be compensated for their time and participation.